The Crafty Beer Girls are Utah based missionaries of beer, here to entertain, educate, and encourage the love of the brew. With the help of Red Rock Brewing Company in Salt Lake City, these fine “sisters” will cover the fresh and the new, along with the history of beer and the industry surrounding it. They hope to make a believer out of you! 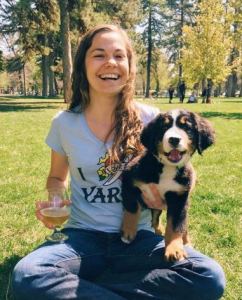 It’s been a long road of waiting tables, pushing retail, and laboring in warehouses, but I finally feel I’ve found a purpose instead of a job. The buzz isn’t just from the beer, either. When everyone around you is happy to be doing what they’re doing – buying beer, making beer, drinking beer – the smiles rub off on you, and then you’re sucked into the business. Of course it can’t all be puppies and sunshine, but that’s what the beer is for, right?

I grew up as an East Coast native sandwiched between New York and Philadelphia. My early adult life was fueled by pizza, Yuengling, marching band percussion and Dunkin Donuts iced coffee. Before finding my place in the beer industry, I wanted to be a nurse (5 years old), a professional breakdancer (10 years old) and a high school music teacher (20 years old). After three years of college, I just wanted to be a traveler. I lived in Oregon, spent a year in Australia and a summer working in Glacier National Park, MT. Landing in Salt Lake City, UT with hopes of riding the seasonal work wave, I landed a not-so-seasonal job at Whiskey Street as a server. It was the first job that exposed me to something more than a casual alcohol menu. Craving more and more booze knowledge, a co-worker turned me onto the Cicerone Certification Program. I dug in an didn’t look back.

As a Utah native, I spent my youth playing in the mountains and drinking Tang. Now that I’m grown, I still play in the Utah mountains, but I drink beer instead of Tang. Beer is one of life’s pleasures, and I enjoy it after a mountain bike ride, after a day on the slopes, summer, fall, winter, spring; it’s always good! My Mom taught me about the four food groups and the importance of a balanced diet. I’d personally add a fifth food group and call it beer because you can find one to go with any dish, and it just makes everything better. If I wasn’t a massage therapist, I’d probably be writer. Since my passion for beer bleeds through into all facets of my life, writing about it is the fantasy job I’ve always dreamed of.

Throughout my beer drinking career, I’ve gone through many phases of beer style favorites. I graduated from the safe beers of my youth (champagne of beers anyone?) with the discovery of stouts and porters. After that, I developed a love for nut brown ales and barleywines before moving on to my current IPA darlings. With my obsession for hops firmly established, I shied away from Belgians, which I considered too sweet. But, to my delight, I’ve found an incredible array of flavors in Belgians, saisons, and farmhouse ales not to be missed! So I’ve decided not to limit myself. I find myself diving into lagers and pilsners that I’d long avoided, associating them with cheap, domestic beer. I live on the wild side with Bretts and sour ales that tease the tongue with funky flavors. There are so many good quality craft brews available in every style, it’ll take a few lifetimes to taste them all. But, I just might die trying.