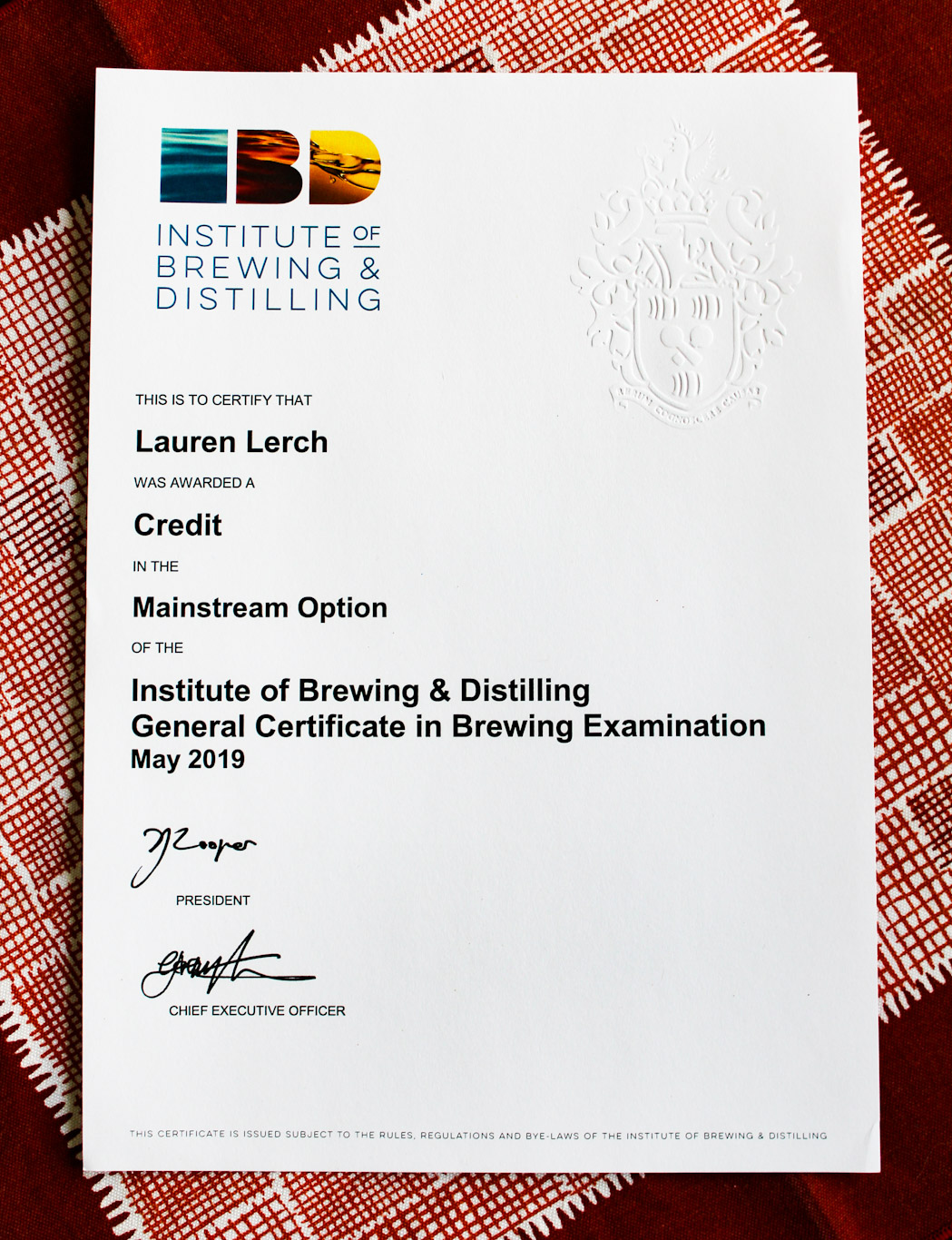 The Institute of Brewing and Distilling (IBD) is a British organization designed to educate and certify the knowledge of professionals worldwide in their respective craft. This includes brewing, distilling, packaging and malting, as well as a branch called the Beer and Cider Academy. Each pathway offers different steps of certification. Foundation level courses are intended for those completely new to the world in which they wish to become certified, while diploma and master level courses are intended for those well educated and experienced in their field. Successful examination and procurement of a certificate, diploma, or title is an excellent way to gain recognition and traction in one’s industry.

When I began working at Uinta Brewing Company in Salt Lake City, Utah, one of the perks I looked forward to taking advantage of was their education reimbursement program. If an employee passes a beer exam, such as the IBD General Certificate in Brewing, the company will pay for it. After I was trained up and feeling confident in my new position, I signed up for the next exam and started digging for study material.

My aim was the General Certificate in Brewing. The cost was £355 (almost $450 USD), and the institute recommends 60-80 hours of study. In the past, a 255 page PDF study guide was given to those that signed up for the exam. As of late 2018, the IBD began using an interactive online learning program, and no longer provide the PDF. A coworker shared the old PDF with me, so I decided to study that first, and then study through the online material to hammer in any concepts I was foggy on. I’m an old school highlighter-all-over-the-page kinda learner, so this worked very well for me. Between the 2016 PDF and 2018 online versions, I noticed some of the material had changed slightly and the organization was a bit different, but it was mostly the same. I broke the recommended study time down over six months.

There are two slightly different versions of the General Certificate in Brewing exam, each supporting two separate styles of beer handling. You will have to choose one at the time of signing up for the exam. The two separate versions are “Mainstream” and “Craft”. Do not think of these in American terms. These exams come from an English mindset! The Mainstream version focuses on carbonation, filtration, clarification and high gravity dilution. Most American breweries fall under this category, and it is the exam I chose to take. The Craft version focuses on cask and bottle conditioned beer. Cask conditioned ale is an old style of maturing and serving beer. This tradition of serving beer has been preserved and supported by CAMRA (Campaign for Real Ale) in the UK. 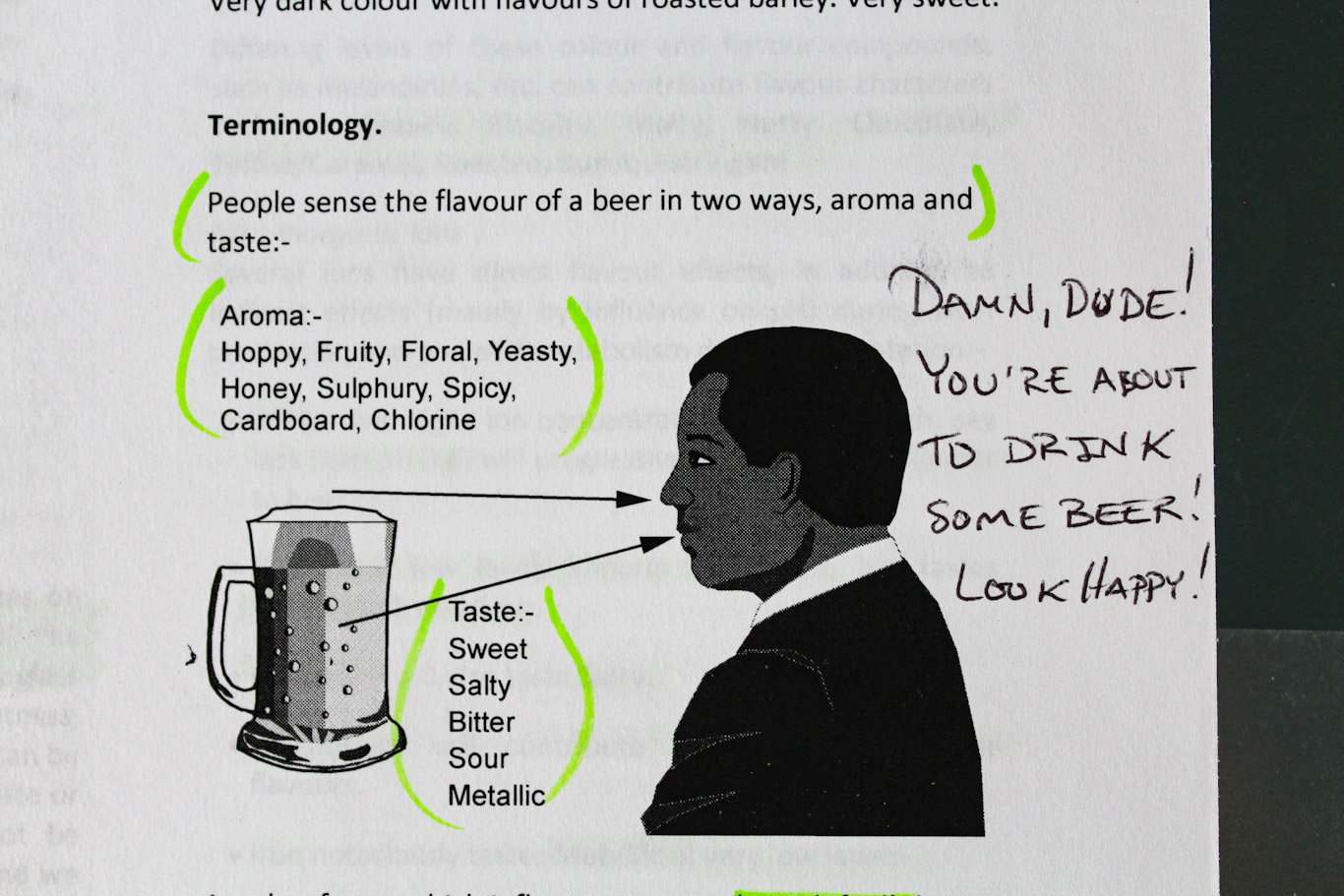 The exam is online, consists of 60 multiple choice questions, and lasts for two hours. It must be taken at one of the 400+ examination centers across the world listed when signing up for the exam. Don’t let the exam format fool you. This was the most difficult multiple choice exam I’ve ever taken. The time given for the exam is, however, incredibly generous. You’ll be given a pencil and scratch paper during the exam. Use it to work through calculations and to make a list of questions to revisit. I also made a list of questions I thought I nailed so I could figure out an approximate grade for myself. 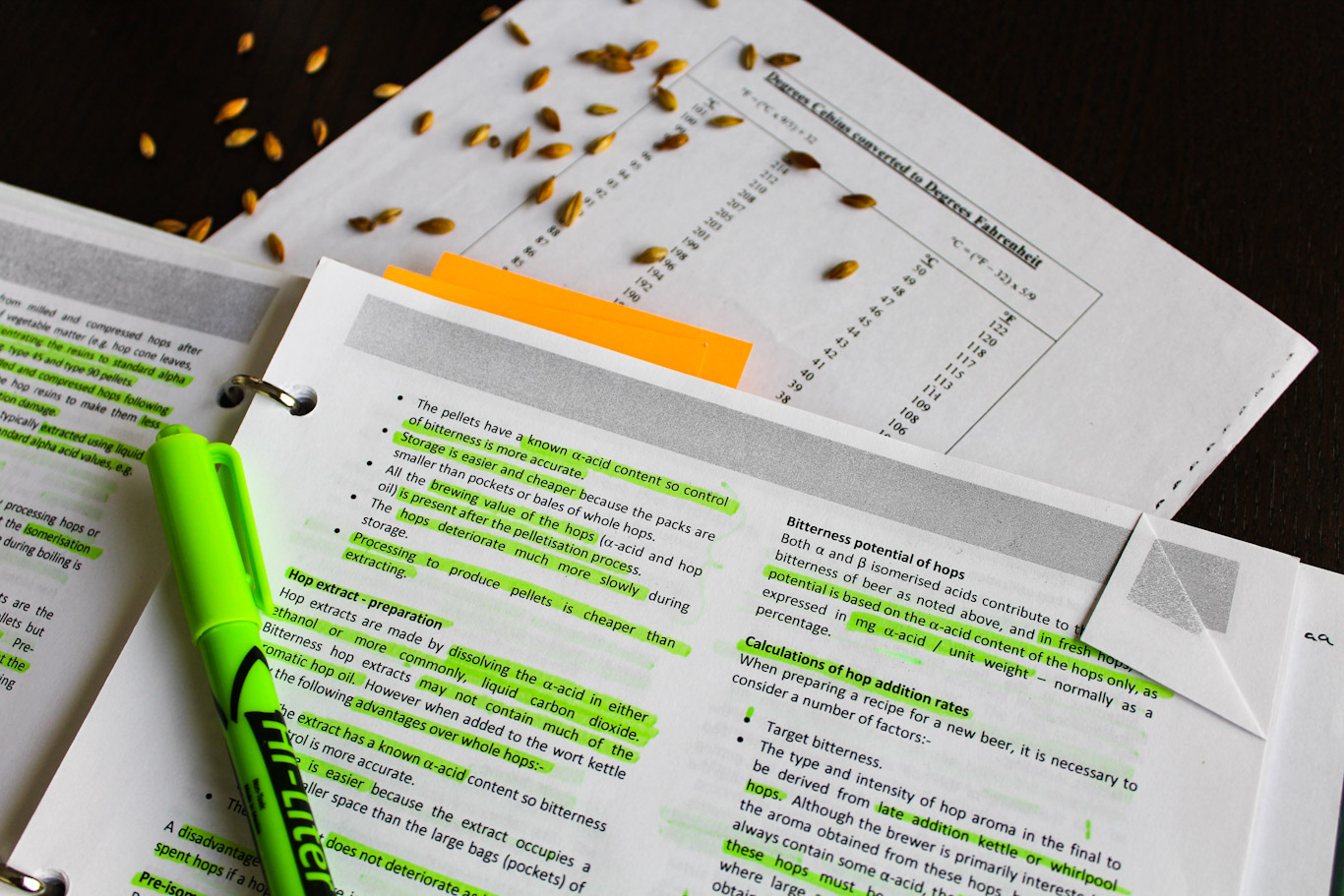 Studying for the Cicerone and BJCP exams, as well as a few years of practical experience in the brewing industry, gave me a great foundation for learning some new material. For contrast, I’ve found the Cicerone Certification Program to be best geared toward service professionals, the Beer Judge Certification Program to be best geared toward serious homebrewers, and the Institute of Brewing and Distilling to be best geared toward professional brewers. Each program has knowledge that crosses over into the other programs in a venn diagram-like fashion. Though I don’t serve beer much anymore and I haven’t homebrewed in a couple years, the knowledge I’ve collected from each gave me the context required to tackle an exam most fit for my current job description.

This brings me to the concept of context! The Mirriam-Webster dictionary defines the word “context” as “the parts of a discourse that surround a word or passage and can throw light on its meaning”. If you’re trying to learn the different methods of producing deaerated water, but you don’t understand chemistry and you don’t know why you’d need deaerated water in a brewery, then you won’t have very good context for understanding the study material. I’m not saying you can’t build your context and then gain understanding. I’m just saying you might be better off building your context through other means before attempting an expensive exam.

Understanding context is the key to passing this exam!

In comparison to other beer exams, the IBD General Certificate in Brewing will supply you with all the material you need to receive a passing grade. Other exams have sent me searching far and wide for study material without a sense of how in depth I needed to know certain topics. This is a big advantage, as you can spend more time studying and less time searching for material to study. However, if you’re struggling with context at any point, it will only help you to break from the supplied study material and research the topics of confusion separately. I definitely did this for some unfamiliar concepts, mainly common British brewing practices that I have never experienced. The study material sometimes includes videos of the concepts in practice, which I found very helpful. For everything else, Youtube was a great resource.

If you’re looking for a credit or distinction grade, you best be ready to fire up the search engine and do more than a bit of scratching beneath the surface. Of the people I’ve spoken with who have also taken the exam, most have stated there are a few questions that were not covered in the study material. You can still get a passing grade without knowing the answers to the unexpected questions, but a higher grade will only come to those with extra smarts or extra luck. One of the four calculation questions I received was not covered in the 2018 online study material, but WAS covered in the 2016 PDF study material. To my knowledge, the pool of questions is vast and randomized per exam. One person I spoke with said they received no calculation questions at all. Luck of the draw, I suppose!

One of the points I like to make when suggesting how to study for an exam is knowing what not to study. When I was studying for the Certified Cicerone exam, I was studying too broadly and too in depth before I found a study guide to narrow the topics and depth of study required to pass. This is where the IBD syllabus comes into play. Not only is the syllabus a good overview of the topics you’ll need to be proficient in, but it literally states what you will not be tested on! The long subsection of engineering basics is not included on the exam, but it does provide good context for the other subsections. I’d recommend reading through that subsection at least once. If you scroll down to the very last page of the syllabus, you’ll find a list of roman numerals that refer to previous sections of the syllabus and specific topics that will not be included on the exam. Keep note of this as you study through the online material! 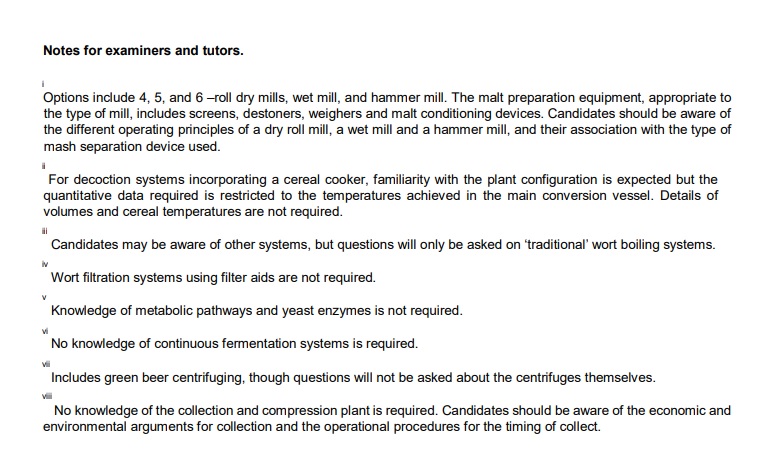 Uhhh…. how many gallons in a hectoliter? As an American, one of the greatest hurdles of studying for this exam was familiarizing myself with the metric system. Having spent a year in Australia was a huge help, as it gave me experience in converting imperial system feet, pounds, and Fahrenheit to metric system meters, kilograms, and Celsius. Most measurements you’ll be concerned with for this exam have to do with temperature and volume, so Celsius and liters are your friend! You should be comfortable with converting liters to milliliters and hectoliters. Print out a Celsius to Fahrenheit chart and take note of common temperatures of certain brewing processes to use as a baseline for memorization. You could always memorize the conversion formula, but running those calculations on paper every time you see a temperature value may slow you down during the exam.

If you’re an American like me, remember that you’re taking a foreign exam written from an English perspective. Though there are many similarities, the handful of differences can be enough to trip you up if you’re not prepared. I managed to receive a credit score when I took the exam in May 2019. I’m thankful to have had an immersive brewing environment full of helpful coworkers that tolerated my questions and pointed me in the right direction. Context is everything! 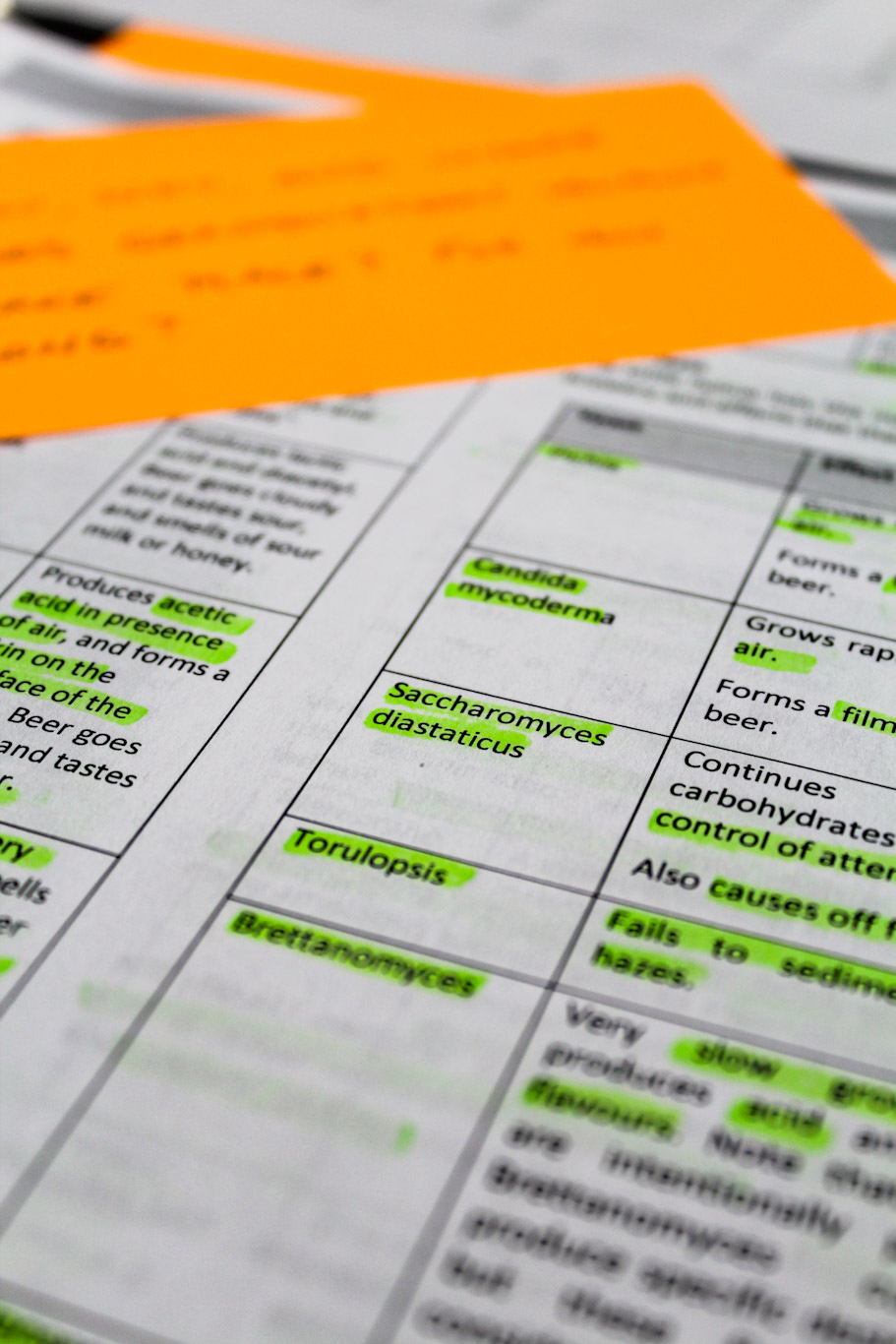 How To Become A Beer Judge (BJCP) Part I

How To Become A Beer Judge (BJCP) Part II