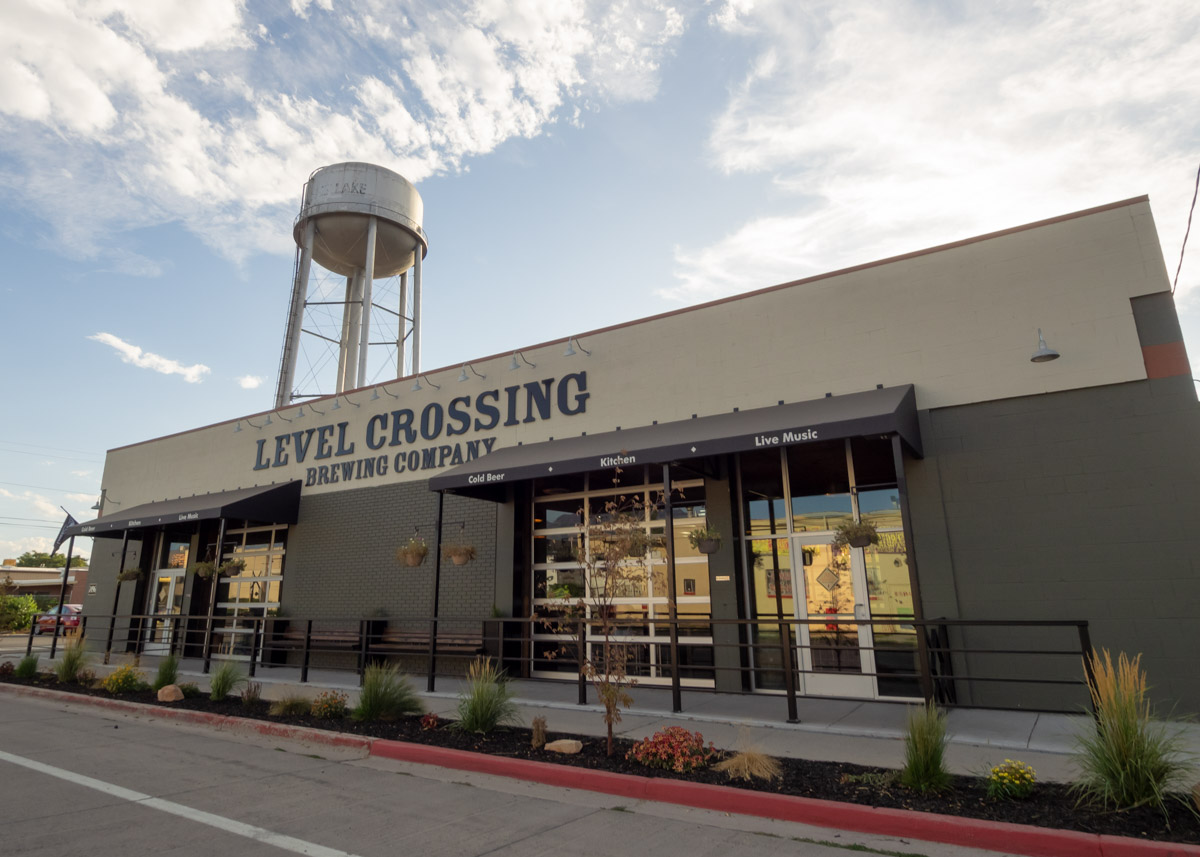 They were the new kids on the block, but now Level Crossing Brewing Company is coming up on 6 months old! Named for the type of intersection where a railway line crosses a road at the same level, the South Salt Lake brewery is still establishing itself and hopes to be an anchor for the up-and-coming “Water Tower District.” Like a pot of gold at the end of a rainbow, the landmark is an easy way to find where the beer is. There is always a place set for the weary traveler to stop in for a frothy glass and bite to eat. Take a load off and enjoy the sights and smells of beer in the making to the tunes of live music. You are most welcome!

I first heard of Level Crossing a long while before it opened when I met founder, Mark Madura at a Christmas Party. Our mutual friend, Johnny McConnell, was using his position on the city council to open South Salt Lake up to allow for more breweries in town. They had a limit based on population that kept the tally to just two. When that changed, it set them up to become a new hub for alcohol-based businesses. There are now 3 breweries and 2 distilleries within walking distance of each other and convenient to the UTA Trax line. The neighborhood is in a development phase that could easily become the next hip part of town. “I think it’s an emerging market for sure!” says Madura. His decision to go all in with a brewery looks to be well-timed and thought out.

Madura comes from the alcohol beverage industry by way of High West Distillery. Working there gave him a front row view of the processes that go into making a finished product from raw ingredients, something he admits he’s fascinated by. “It’s always been a passion of mine,” he says. “I just thought it was really cool to take a grain and turn it into this delicious nectar of the gods!” A mutual friend from High West introduced him to his eventual head brewer, Chris Detrick. Both were homebrewers, but Detrick had a system in his garage that was as close to professional as it gets. “The homebrew setup was done 100% intentionally to mimic what I thought an efficient professional brewing setup would be like,” says Detrick.

The two shared some beers over a rough draft of the business plan and the wheels were officially set in motion. For Madura it was “love at first sip!” Detrick fit the profile for what he was looking for in a brewer. “I knew what I didn’t want, and that was a veteran professional brewer,” says Madura. “I wanted to have the collaboration; a clean slate.” After 16 years of homebrewing, Detrick is anything but green, but this is his first professional brewing gig. He left his job as a newspaper photographer for the Salt Lake Tribune to start his new career at Level Crossing. When I ask him if he misses his old job he answers, “I’ve already done that.” So, it’s on to new horizons! 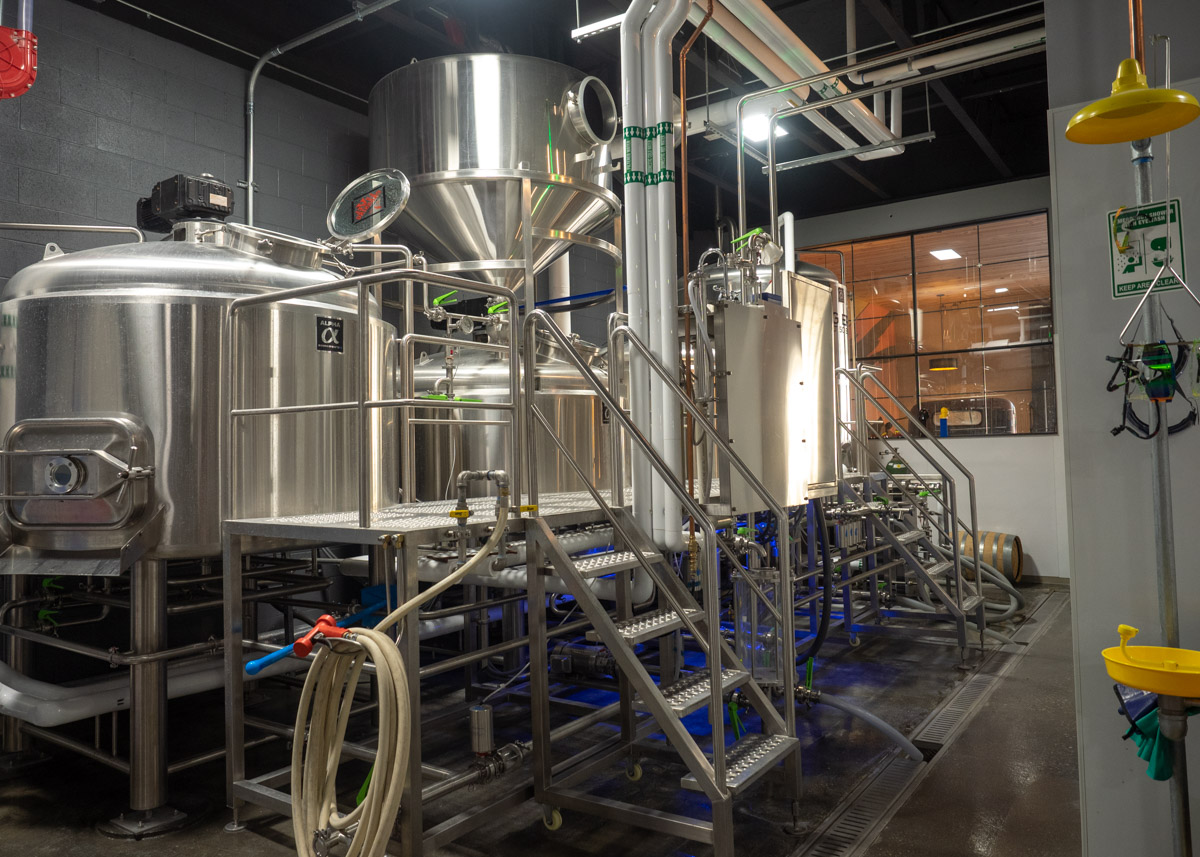 The transition from homebrewer to pro seems to have been a smooth one. Detrick asked questions and received advice from other professionals. “Coming from 12 gallons in the garage to 500 gallons at a time, it’s a big difference,” he says. “But, fundamentally it’s the same.” He is brewing some of his tried and true recipes for Level Crossing’s high-point canned beer, but all the draft beer is completely new. Utah’s 4% ABV (soon to be 5% ABV) limit on draft is a new constraint for Detrick (not something homebrewers have to worry about) who has chosen to brew styles that are appropriate at the lower alcohol level. One of the brewery’s signature offerings is the You-Tah Uncommon, a Kentucky Common style beer. A dark version of an American cream ale, the style lends itself well to the 4% standard. 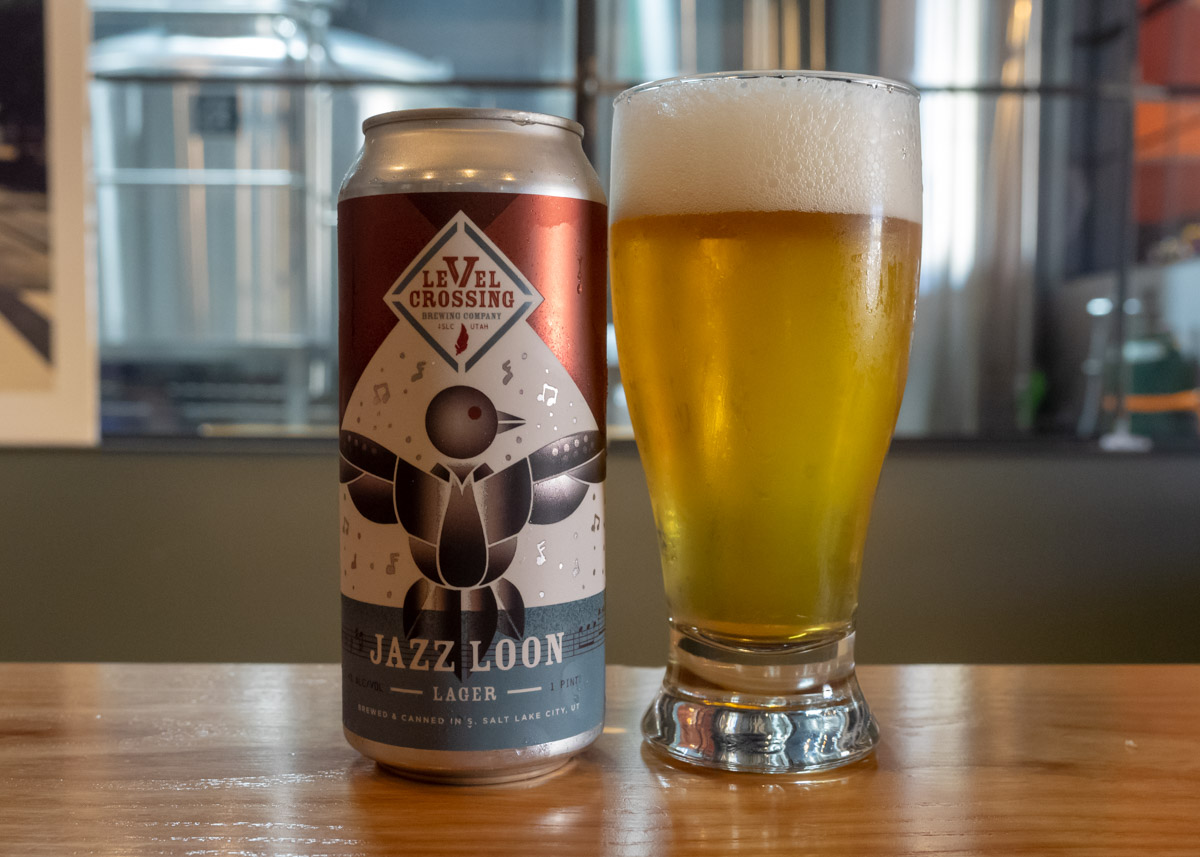 Despite the restriction on draft beer, Level Crossing has a growing portfolio of canned beers that fall in the high-point (above 4% ABV) category, and they can be enjoyed at the brewery or taken to-go. These are beers Detrick has brewed versions of as a homebrewer, often many times. Soul Rex is an 8.4% ABV Double IPA made with a layered hop blend of Azacca, Strata, and Ekuanot. The newest canned offering is an American Rye Pilsner called Jazz Loon. Detrick brewed the recipe for the first time about a year ago. The smooth 5.4% ABV brew will be Level Crossing’s first lager. It’s crisp and clean with an assertive hop bitterness in the finish. The rye is subtle, meant as an accent. This beer releases on Friday September 13th with a cool jazz-themed party! Next up is a 6.2% ABV Belgian blonde called Dallas Alice, and there will soon be canned versions of the 4% ABV Hazy Pale and Amber ales in Harmons grocery stores. 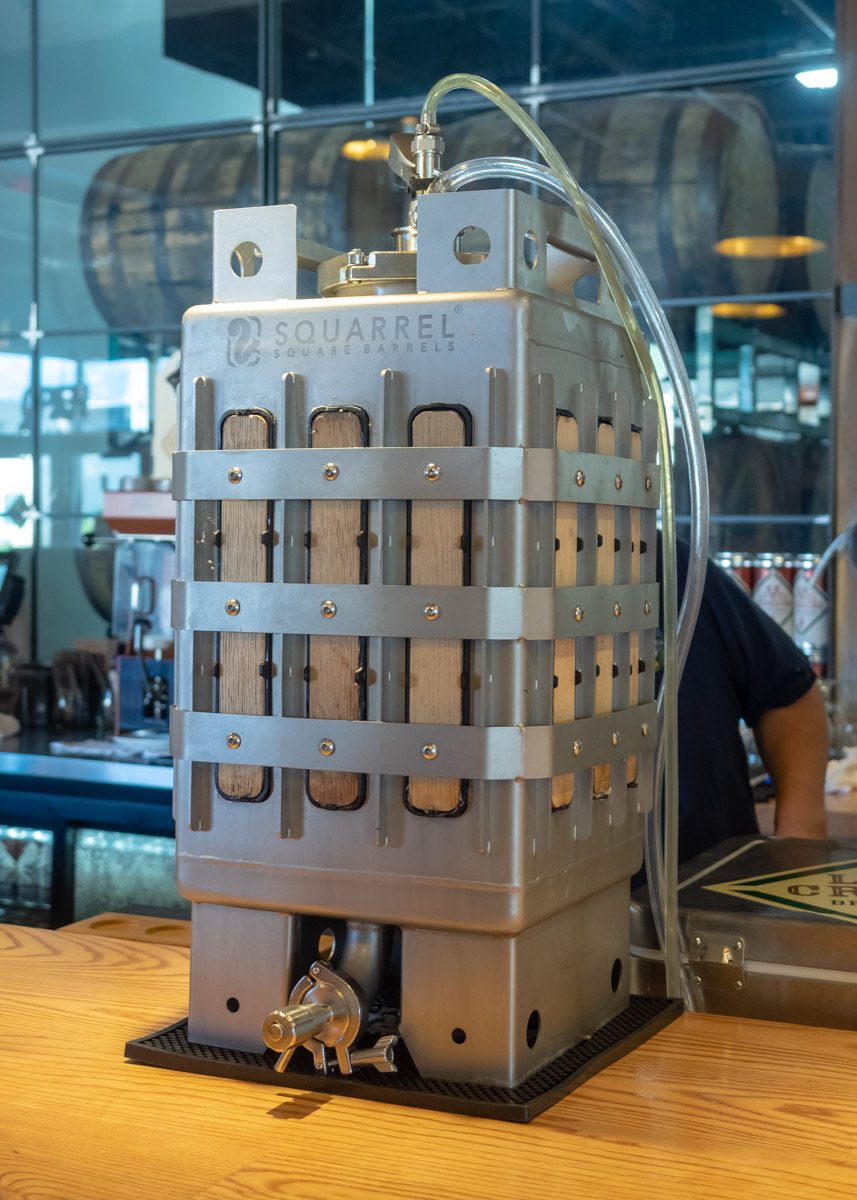 Fans of barrel-aged beers will want to check out the Squarrel program at Level Crossing. It’s a unique twist on the practice of imparting wood flavors into beer. Unlike barrels typically used in breweries, the Squarrel wood hasn’t been in contact with spirits, providing an unadulterated infusion of what the wood itself has to offer. It consists of a rectangular metal frame with removable wooden staves that can be mixed, matched, and replaced as desired. Options for staves include American, French, and Mongolian oaks along with other woods like olive and Spanish cedar among others. The wood is salvaged from the remains of wood flooring that would typically be scrapped. 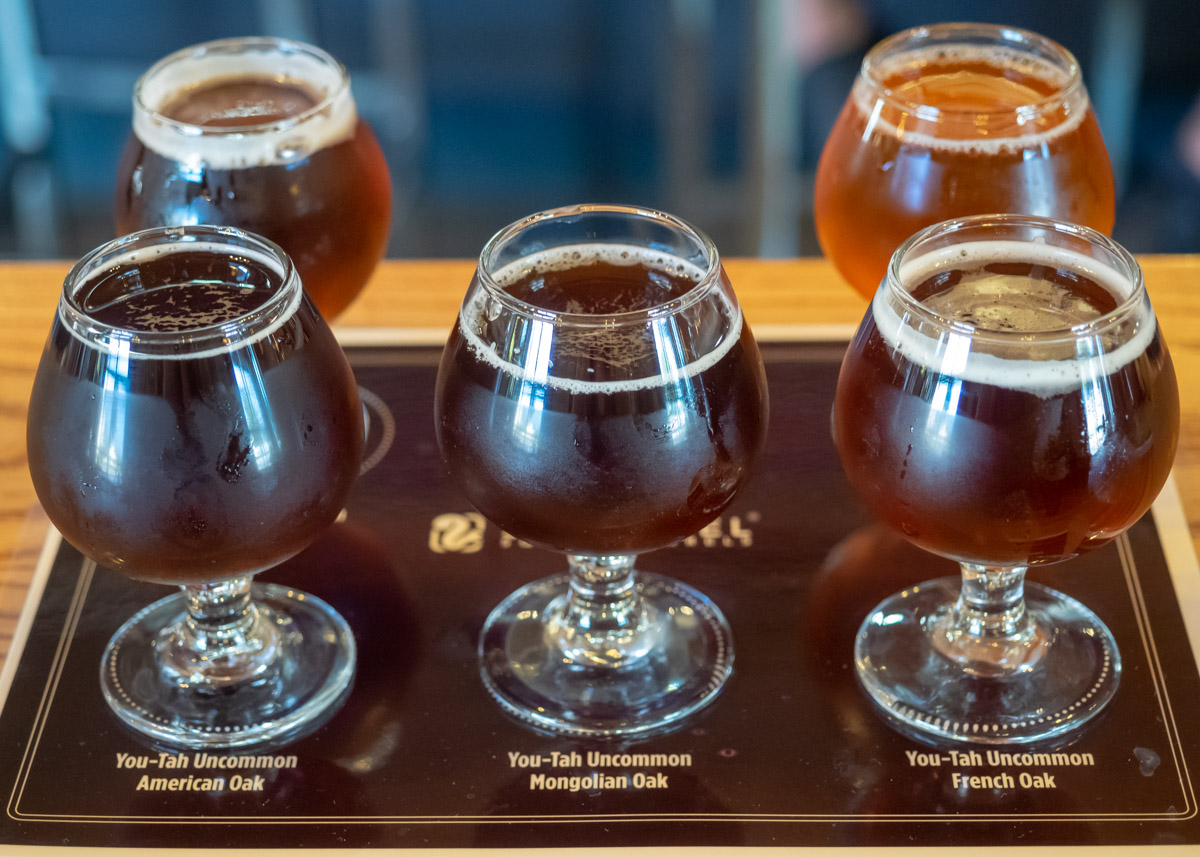 The Squarrel at Level Crossing is a 10-gallon vessel with endless possibilities. Because the surface area to volume is high, the beer “ages” much more quickly (about 5 days) than it would in a barrel. The first experiment took the You-Tah Uncommon and aged it in each of the three different types of oak. They also threw some coffee into a batch of the Amber Ale. I was able to taste them all side-by-side and found it very illuminating. The French oak was the most subtle with a touch of crème brûlée, milk chocolate, and cinnamon. The Mongolian oak was rich and spicy with flavors of hazelnut, nutmeg, cinnamon, espresso, vanilla, and leather. The beer aged with the charred American oak staves was the boldest. Sweet notes of vanilla, roasted coffee, and fruit jam dominate the palate. 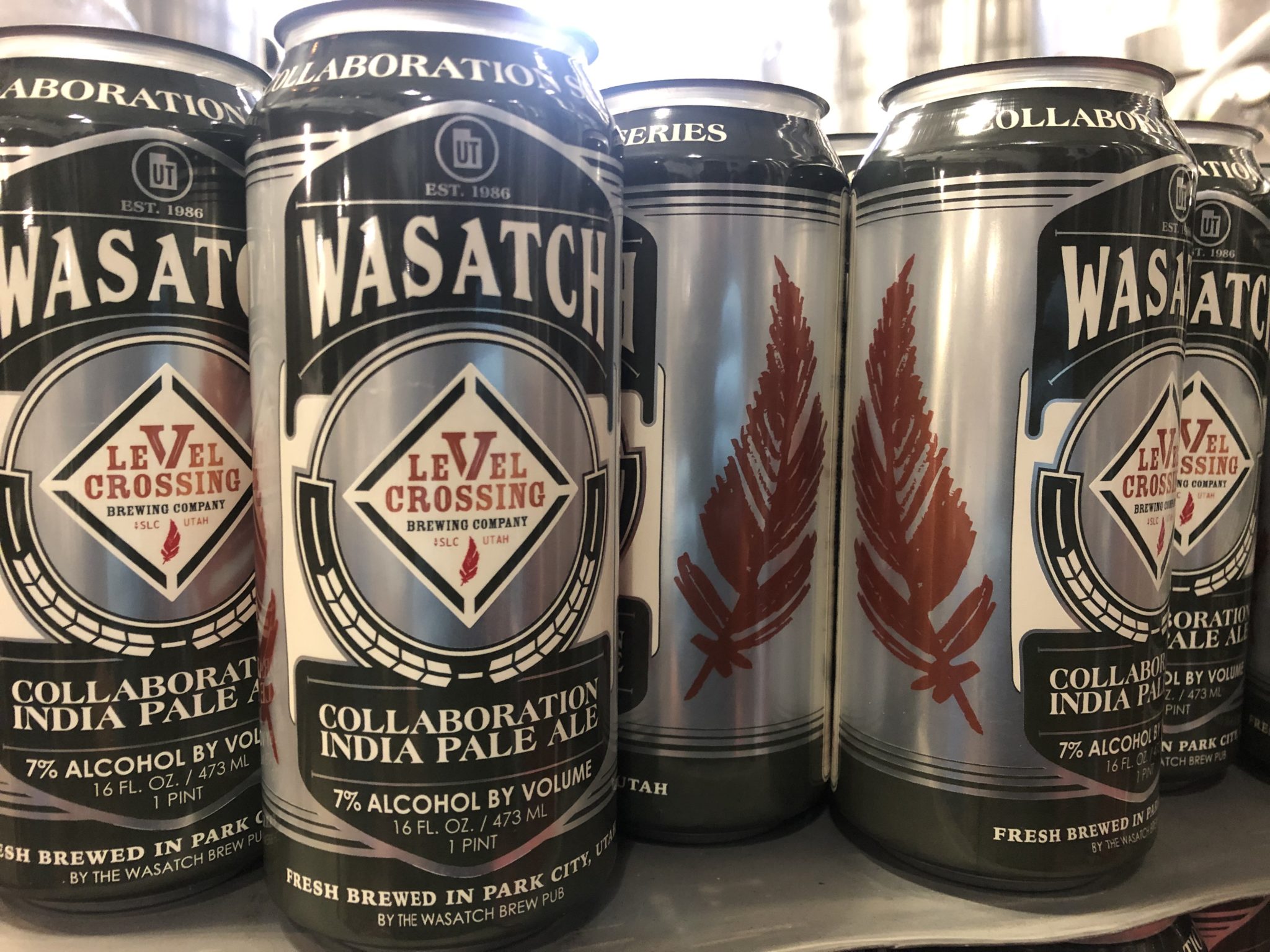 If you attended the Squatters 30th Anniversary Beer Fest on September 9th, you were treated to a collaboration beer between Squatters and Level Crossing. A portion of the ESB (Extra Special Bitter) was aged in the Squarrel with a combination of American and French oaks to be served in addition to the un-aged version. That’s not the only Level Crossing collaboration beer brewed recently. Detrick teamed up with Nils Imboden of Wasatch Brewery in Park City for a high-point IPA version of the pale ale they brewed for the Utah Brewers Guild Festival this summer. It was canned last week and should be available soon for dine-in only at Wasatch Brewpub locations and Level Crossing. 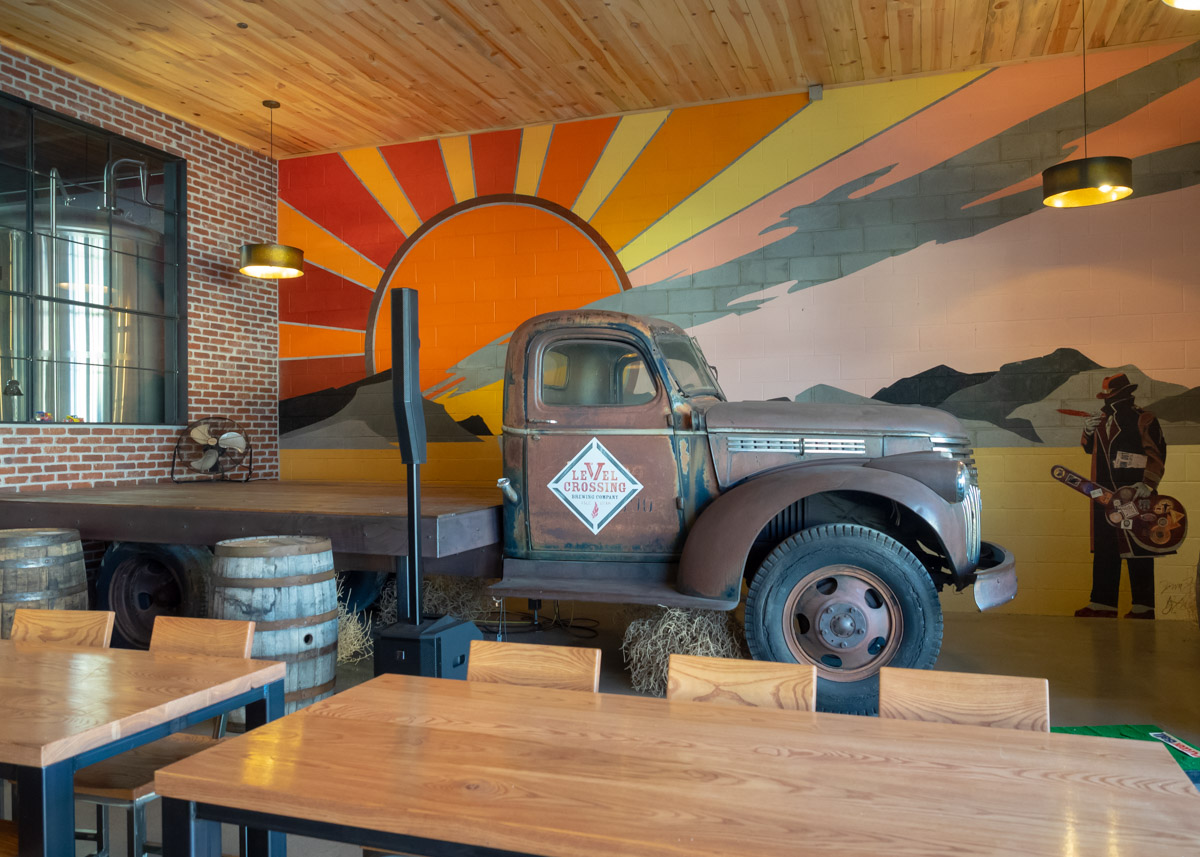 Level Crossing Brewing Company is on track to become a fixture of South Salt Lake’s hip new Water Tower District and Utah’s craft beer community. Besides great beer, enjoy tasty food like the Philly Pork Sandwich made with smoked meat from nearby Pat’s BBQ. Soon there will be a wood-burning pizza oven too! Watch for new releases on draft and in cans, and don’t miss out on the wood-aged offerings straight from the Squarrel. The casual atmosphere of the brewery makes it perfect for hanging out and even listening to live music. Bands perform from the flatbed of a 1946 Chevy truck that lives in front of a gorgeous mural painted by Utah artist Jann Haworth. What are you waiting for? Get on down there!