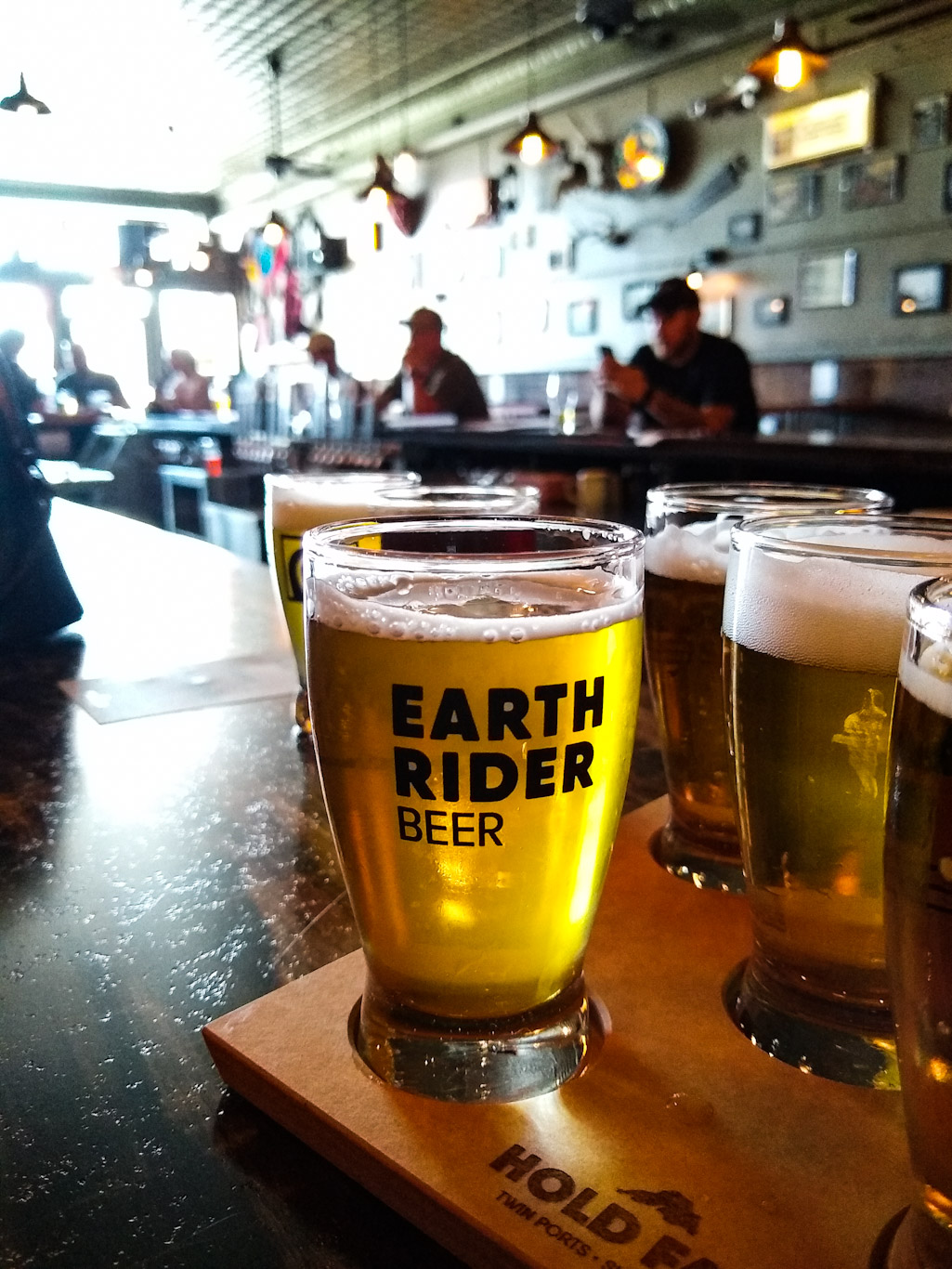 If you haven’t checked out part one of my Midwest road trip, pump the breaks and click here. Or if you abhor Minnesota like Julie does, you can start two paragraphs below where the Wisconsin part of the trip begins.

You’d think I’d have learned by now, but most trips with Julie begin with us being varying levels of hungover. After Surly, we went out for dinner at a local dive, and followed it up with sharing three flights at The Happy Gnome. You’d also think arriving back at the airbnb would call the night, but the hosts were partying, and well, we were on vacation. I woke up to puppy kisses from Arc (Julie and her husband Michael’s retriever puppy), and a headache the size of Surly’s outdoor projector screen. Life was gonna be hard that day, but I was committed to the experience.

A few hours of driving and a few bites of a Tobies cinnamon roll later, we had arrived at Julie’s dad’s house in Superior, Wisconsin, our home away from home for the next few days. Julie’s dad is one of my favorite people in the world. I call him Papa Olaf or Papa O. He’s the kind of person that I strive to be: kind, curt, and only gives a damn about the important things. He showed us the coal docks he spent half his life working on and had recently retired from. When we were leaving, he told his old co-workers, “Tell the people I like I said ‘Hi’, and tell the rest of ‘em to go to hell.” as he rolled his car window up and drove off. What a badass. Oh, and he just so happens to love beer. 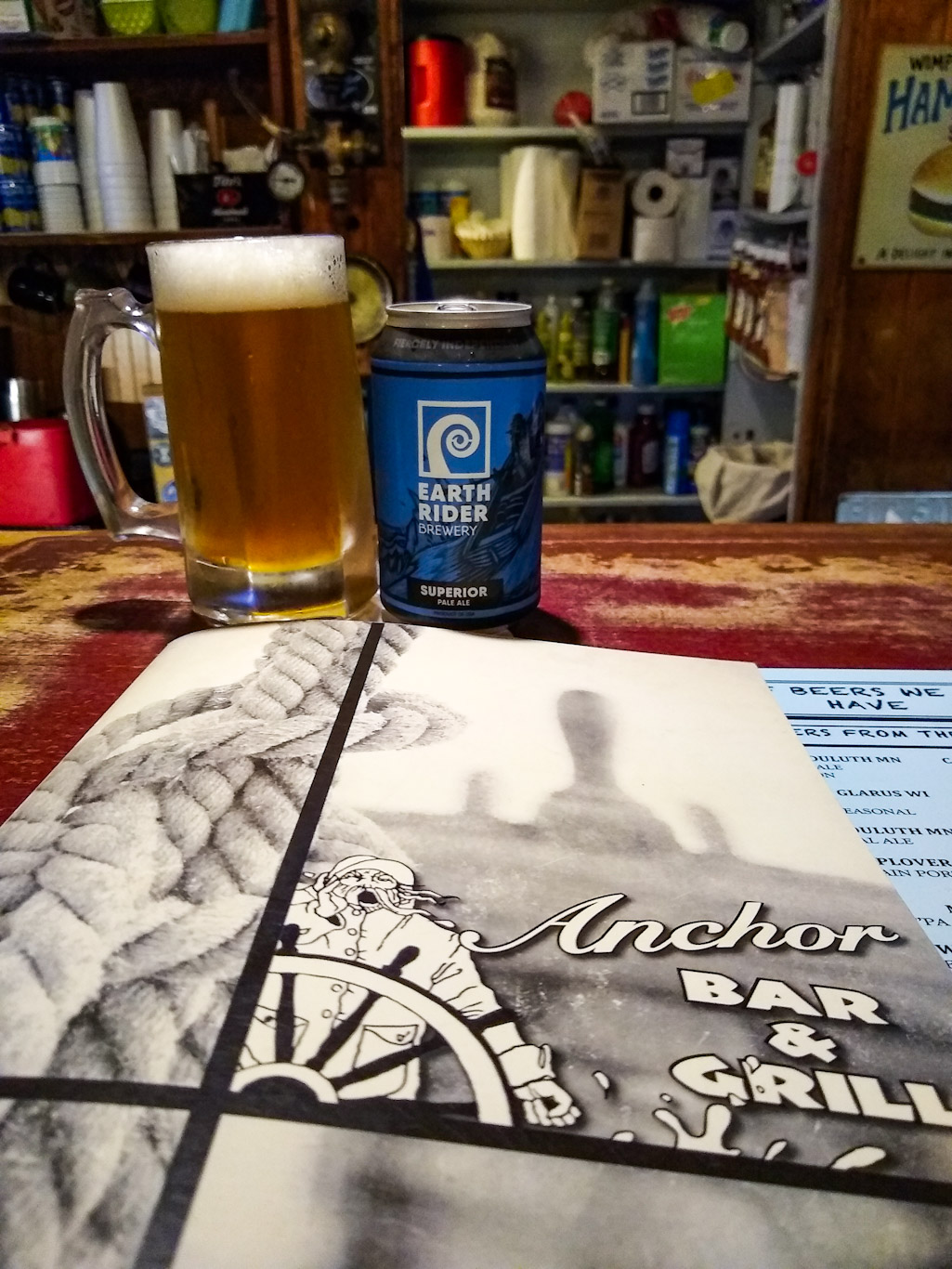 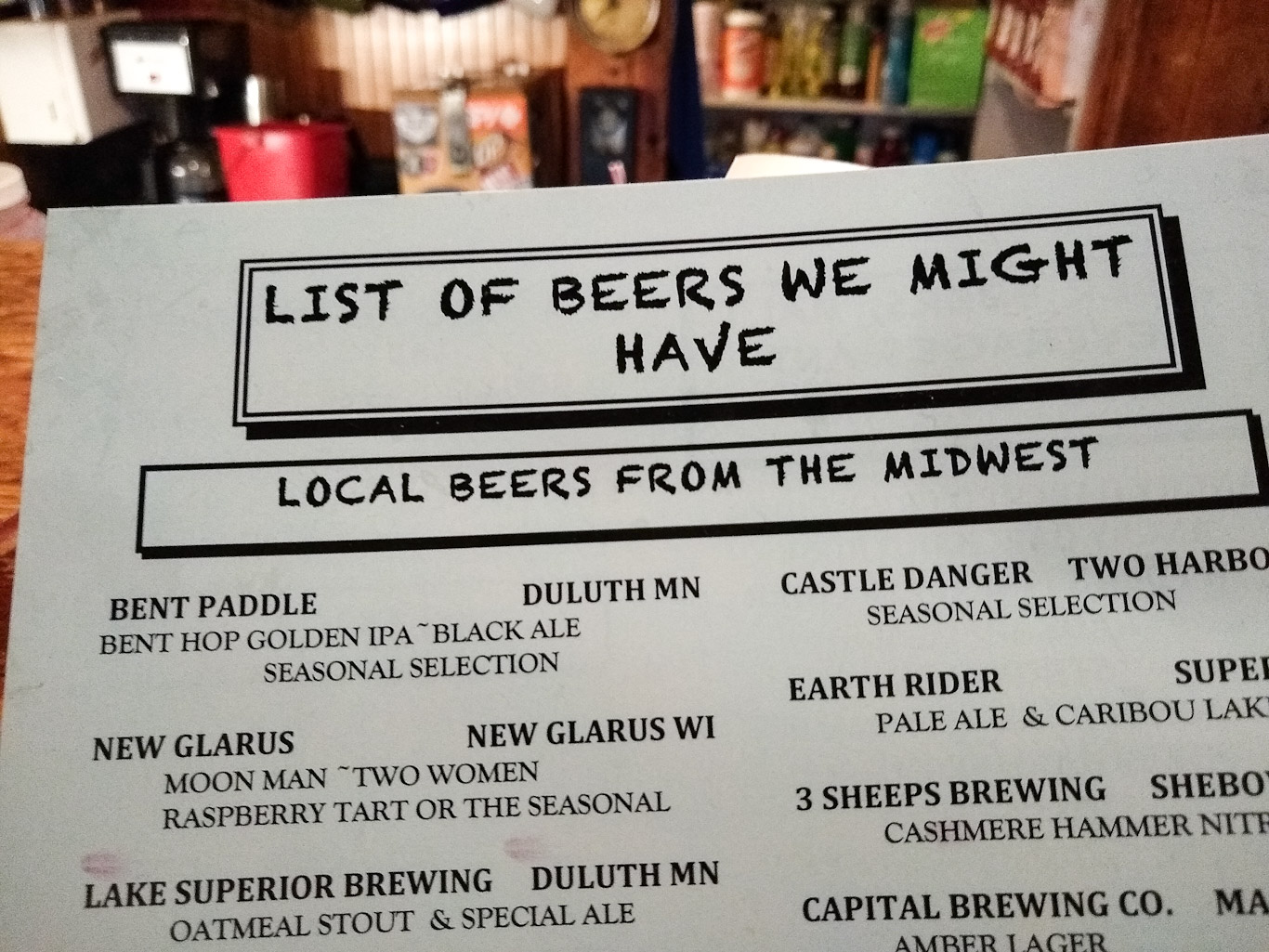 Famished and still thoroughly fighting the shockwaves of having too much fun the day before, we set out for bites and hair of the dog. Anchor Bar felt like both a means to an end, and the start of my meaning. This is how a greasy burger and a solid beer feel in the belly of a hard traveled woman. The walls were decked with maritime memorabilia, and the menu was as pithy as the waitstaff. The entire environment begged you to be simple and concise, and I was relieved to be just that. It might have been the paper towel rolls within reach of every seat, or perhaps the stellar company, but I was indulgently at home in a place I’d never been before. Such was the theme of my trip. 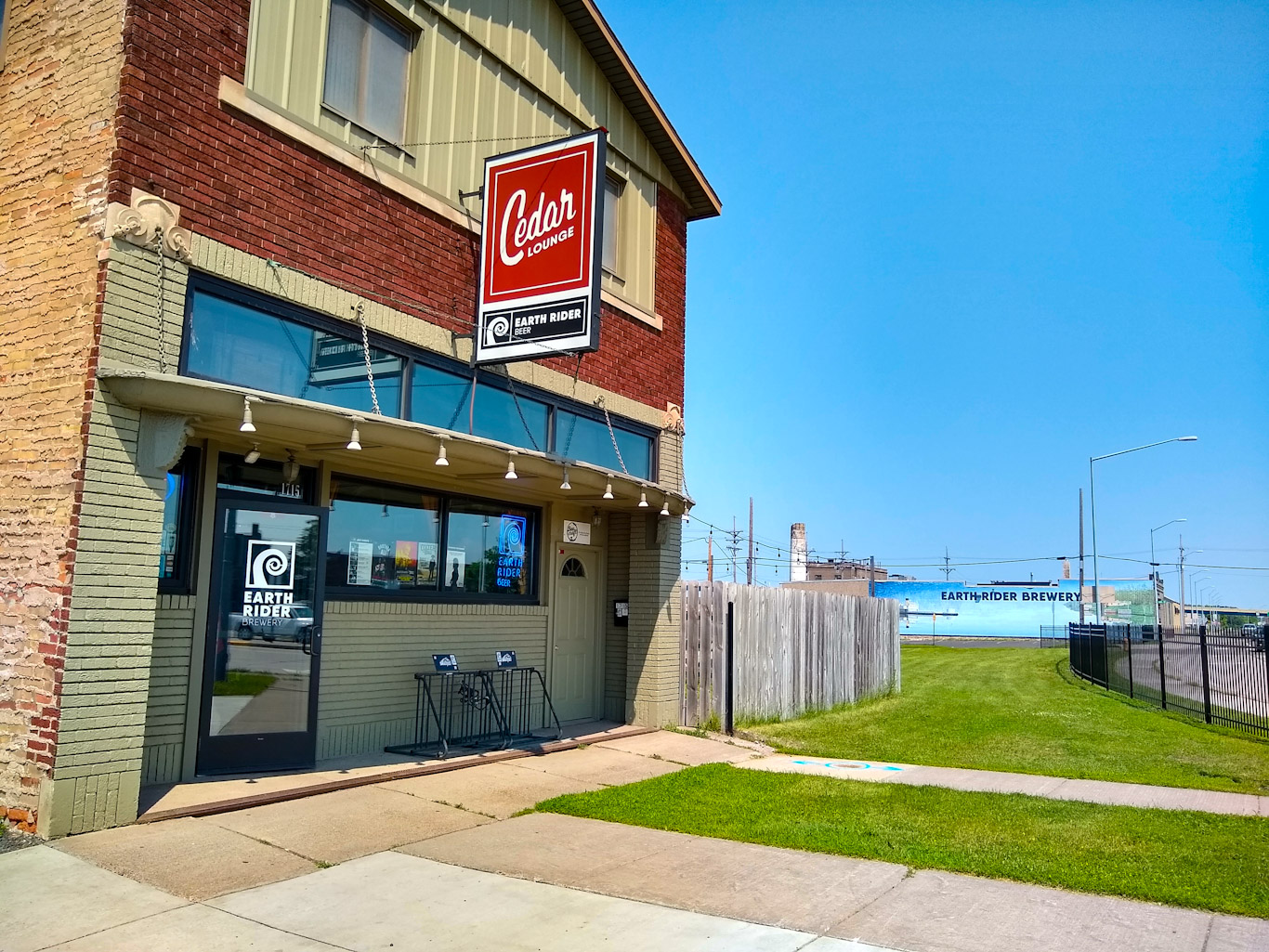 It was a wintry January morning in Utah when I had my first Earth Rider brew. Julie had brought me a few brews from Wisconsin before Christmas, and I couldn’t think of a better trail beer than a helles. I was trotting through virgin powder with my pup on a less-traveled Millcreek Canyon trail when I cracked a can of Precious Material Helles Lager. My “Oooooo” was muffled by the snow, but I held onto the feeling.

A few steps inside the Cedar Lounge, the Earth Rider taproom, felt like some reversal of birth. I’d imagined this is what newborns were screaming for moments after being pushed from the womb – to be placed back into a nourishing realm of comfort. As a grown ass woman in her best friend’s town, this was as good as it gets. I had found it – the place of my wintry day dreams.

We drank through a few samplers of their standard offerings before settling on a mass quaffing of their seasonal Raspbecrush. It was clearly the town favorite, as almost every drop was drunk before the next batch was ready. If you find yourself with the opportunity to purchase a six pack of either their Raspbecrush or the Duluth Coffee Pale Ale, you’d best seize it! Huge thanks to Jack’s Place for sharing their wealth of the pinkish gold with us when everyone else was out!

The evening wouldn’t have been fit without some New Glarus Spotted Cow from Papa O’s most frequented watering hole – Jimmy’s Saloon. I heard one regular greet another with a firm, “Hey Dick Face”, when he walked through the door. There was as much love in that greeting as any other between good friends… maybe more. My life’s aspirations slowly revealed themselves. 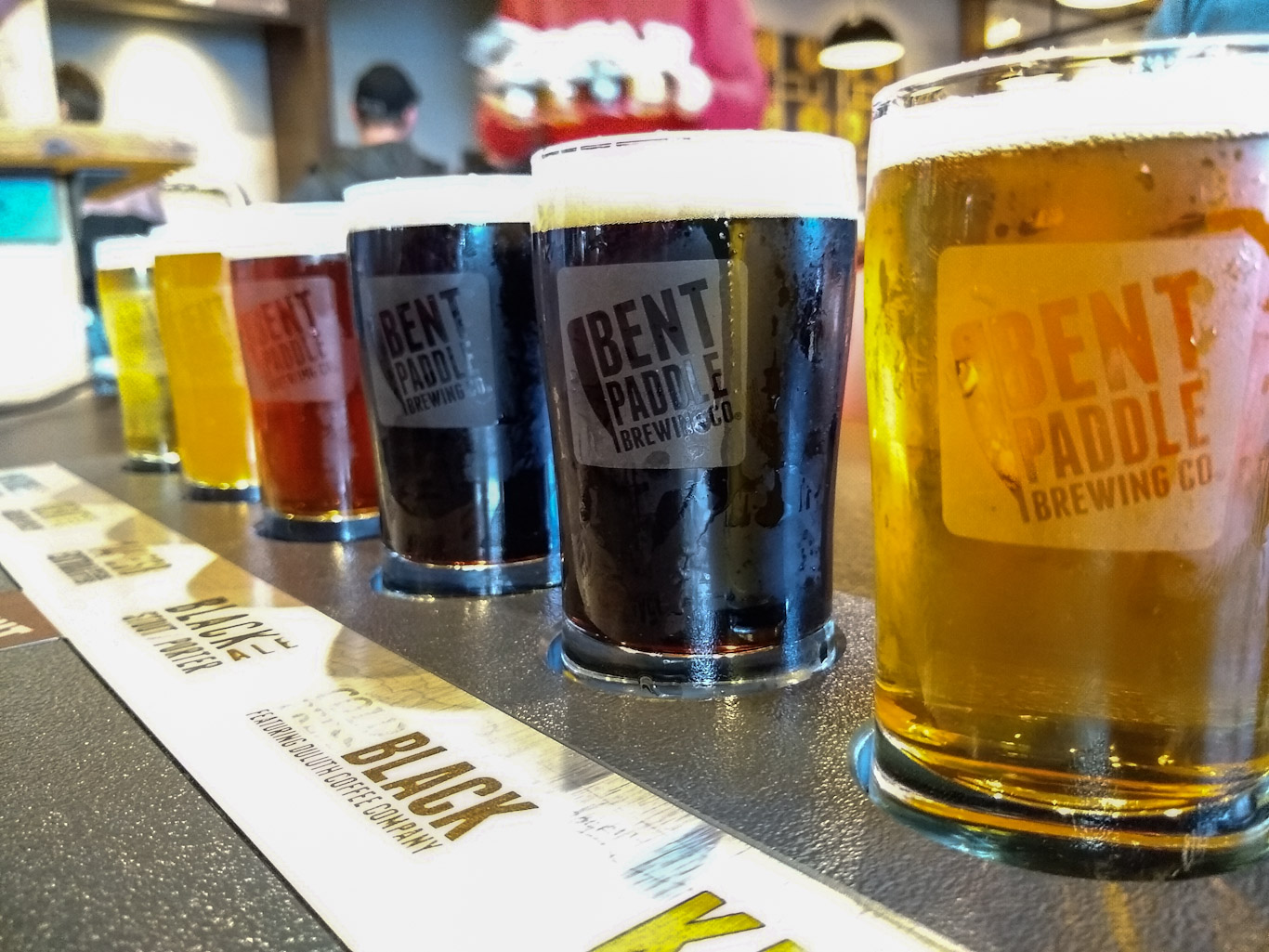 Alright, maybe I baited you. There’s more Minnesota to this trip than Julie would like to admit, but I enjoyed all of it. My blood is neither green nor purple (don’t tell my Eagles fanatic grandma, even though I’m clearly talking about the Packers and the Vikings), so I was able to enjoy the best of both sides of the lake. Bent Paddle looks like a small town outdoor goods store turned brewery. Their seating options vary from roughing it outside to cozying up by the indoor fireplace. Teal and blue honeycomb tile comfortably clash with the stained wood floors to guide guests toward the most ideal ordering stations. Though they seemed built for high volume, we enjoyed stretching out and taking our time while business was quiet.

Their 14° ESB and Cold Press Black Coffee Ale are not to be missed. A great feature of their beer menu was the ability to order a good handful of their brews on nitro. I have had the two aforementioned beers several times before, but never on nitro. The serving style allows the more malty characters to sing without interference from the bite of carbonation. Nuances are easier to pick out, and they also feel less filling.

The recurring theme of Duluth Coffee as an ingredient of some of the Duluth/Superior’s tastiest brews is no coincidence. I was able to snag a few, surprisingly cheap bags of Duluth Coffee Company beans for my home espresso machine, and I am digging it! 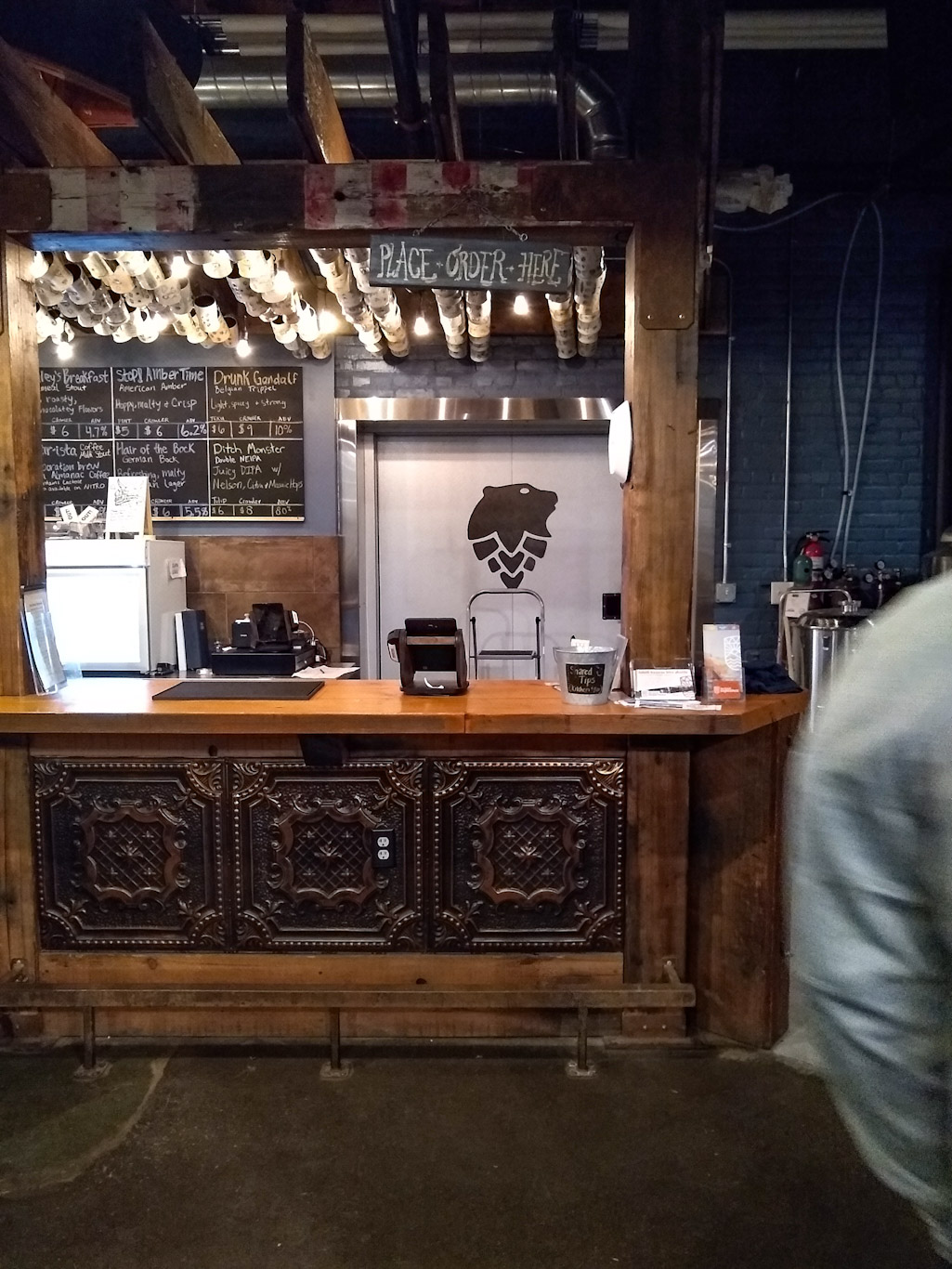 Ursa Minor Brewing was the last stop of the evening, and it was right in tune with what I wanted. It must have been a quiet night in Duluth, as the Ursa Minor taproom was also only spotted with a few groups of two or three people sipping easy and talking softly. The taproom was bear-themed, and carried the outdoorsy feel the town seemed to imbue in most of the businesses. We ordered a couple flights and let the outdoor chill nip at our necks while the fireplace rosied our cheeks. My favorites were the Cherry Cream Float and the Bear-ista. Can you guess what the Bear-ista has in it? Mmmhmm, coffee! This time, Almanac Coffee was used to infuse the delight that is caffeine and roast into a milk stout. Let me say it in case you weren’t feeling obligated yet – if you’re in the Duluth/Superior area, you MUST try the coffee beer.

There’s more where that came from! Come back around in a couple weeks for Leinenkugels, Stevens Point Brewery, and Central Waters Brewing Company. 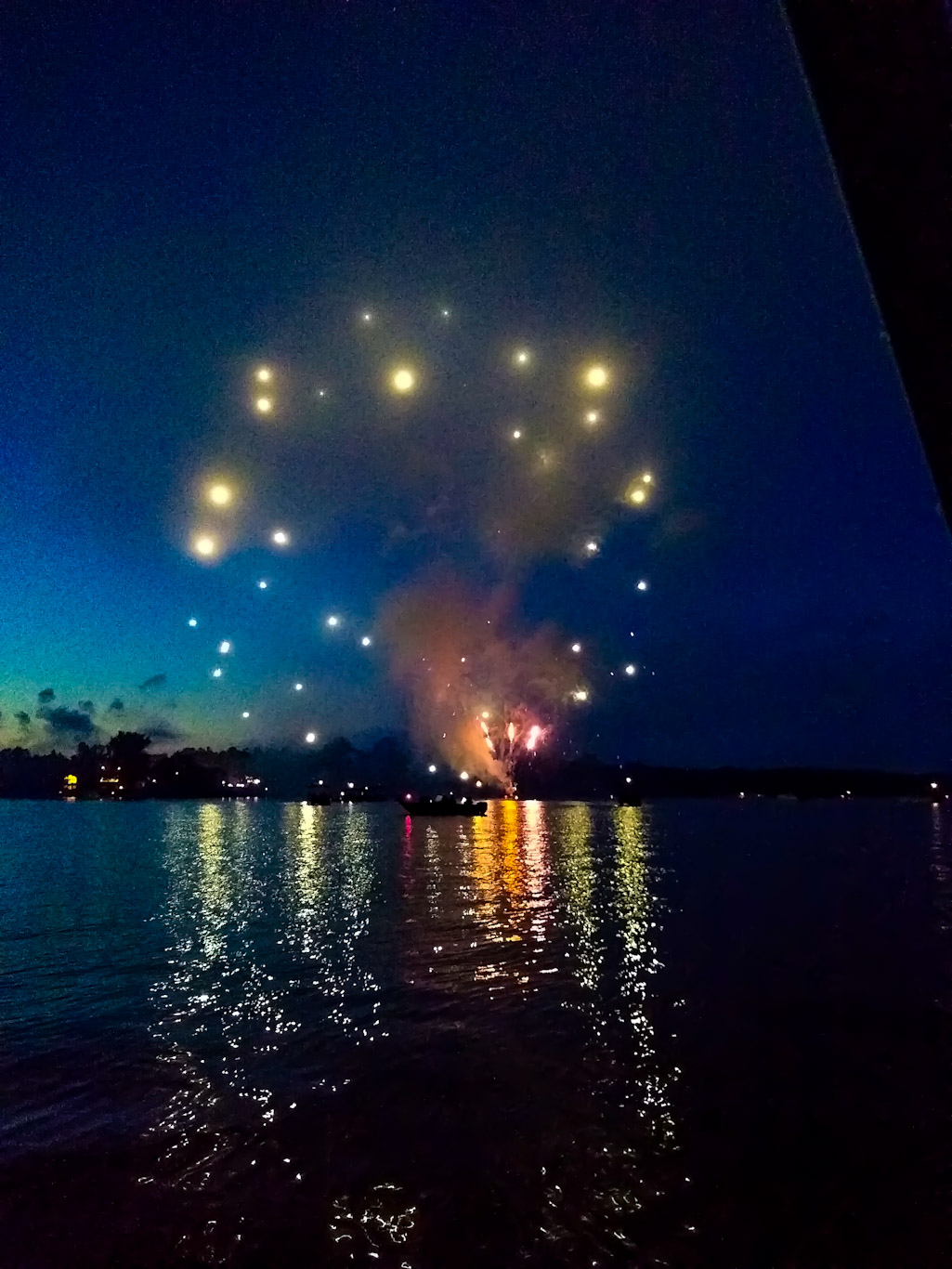