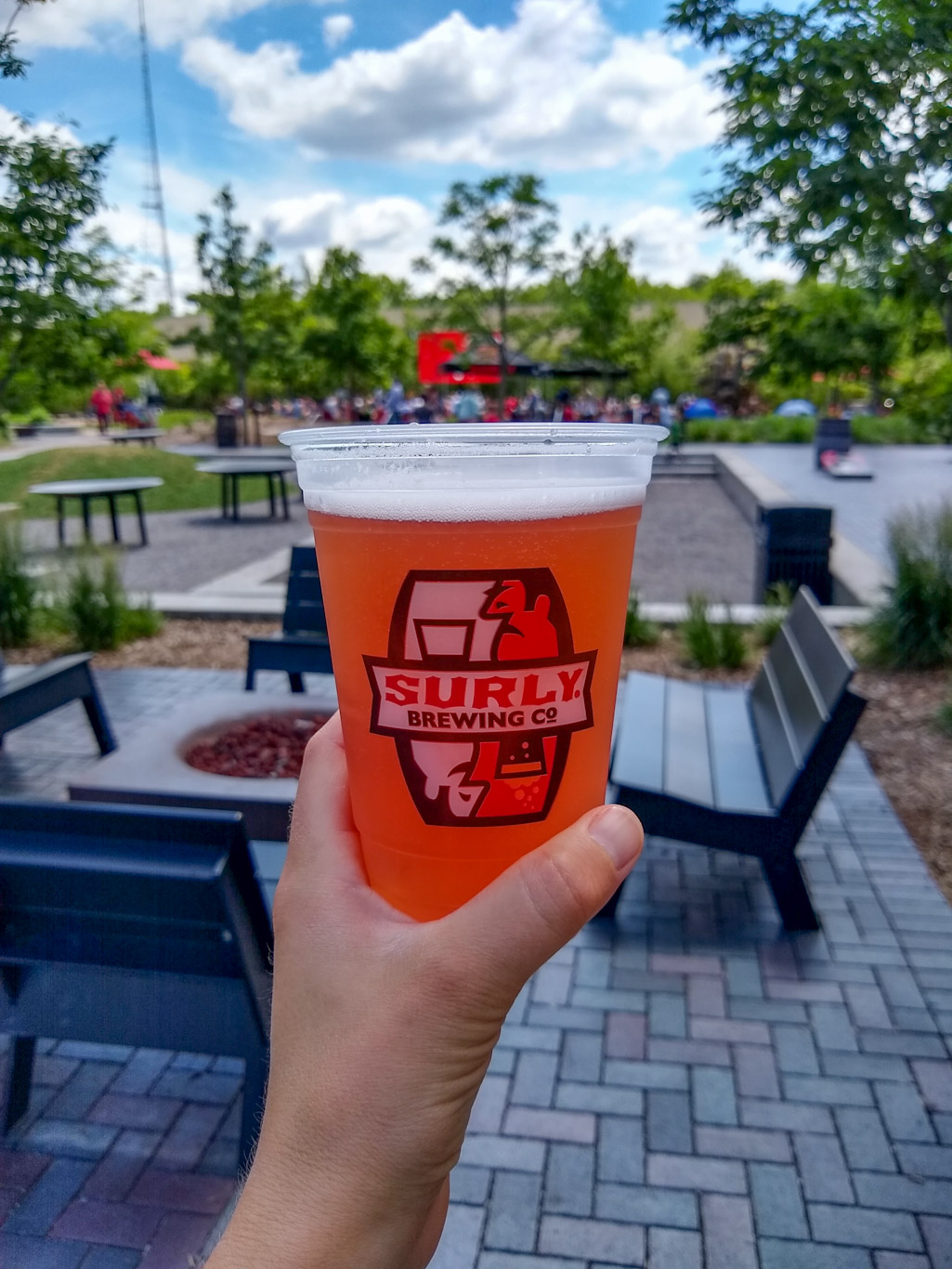 When your best friend gets married, buys a house, and gets a new puppy all within six months, there really is no better way to celebrate than by taking a gluttonous beer trip through her homeland of the Midwest. You may remember Julie from some of my past GABF posts (2016, 2017, 2018). She has been bringing cheese curds and New Glarus back to Salt Lake City for me since we became friends, and now I’m finally having the pleasure of tasting these delights from the motherland. Grab a bloody mary and a fresh “bayg” of curds – we’re gonna get rowdy! 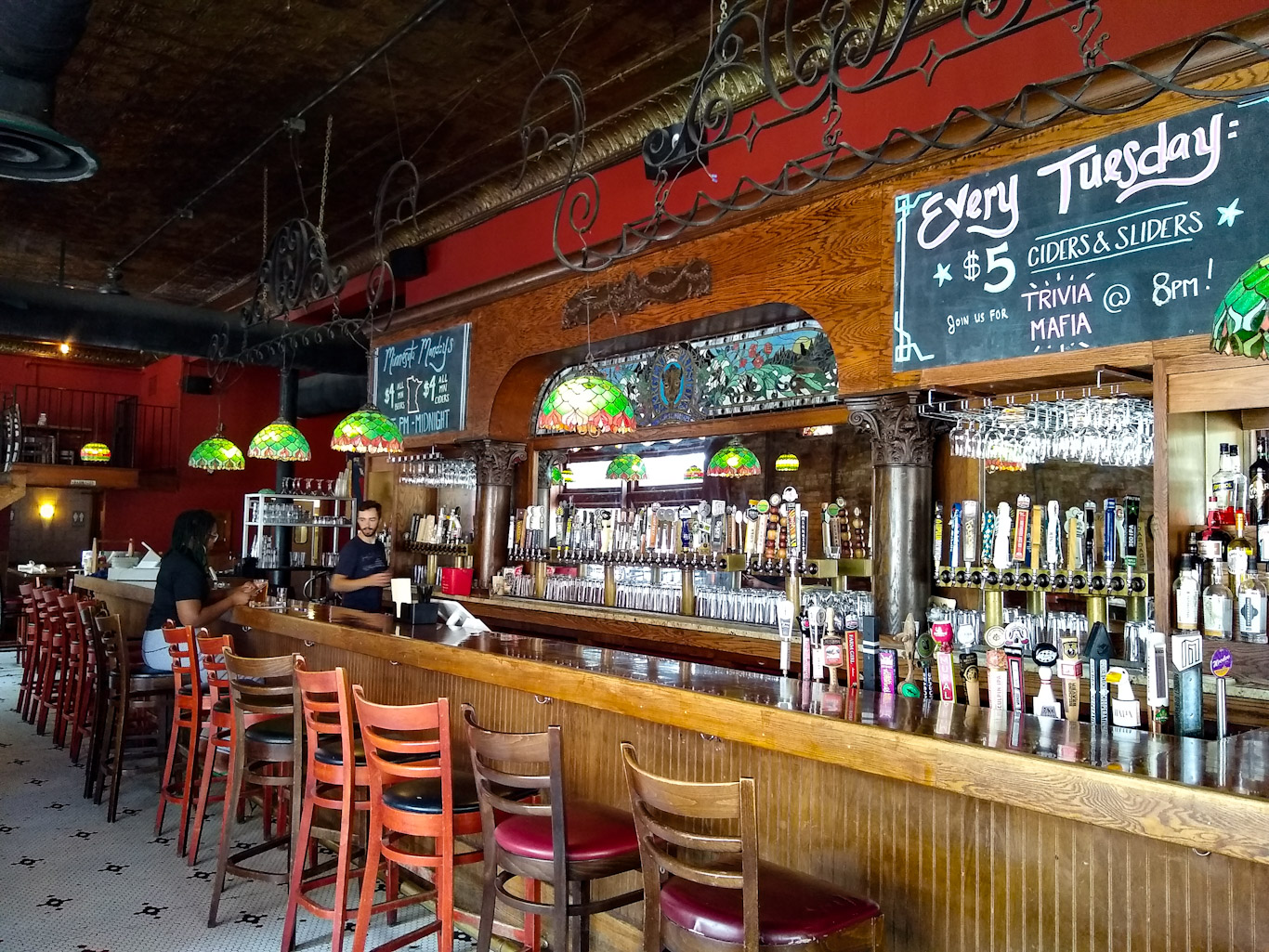 I can only walk around a new city in the morning hours for so long before curiosity and thirst gang up on my made-up rule that I can’t start drinking five or six hours before my friends roll into town. After a two hour flight from SLC to MSP, breakfast at Maria’s Cafe, and wandering the town for non-drinking activities, I caved. It is, after all, the Midwest. And I’m on vacation. And I’m an adult. See – there are plenty of good excuses! 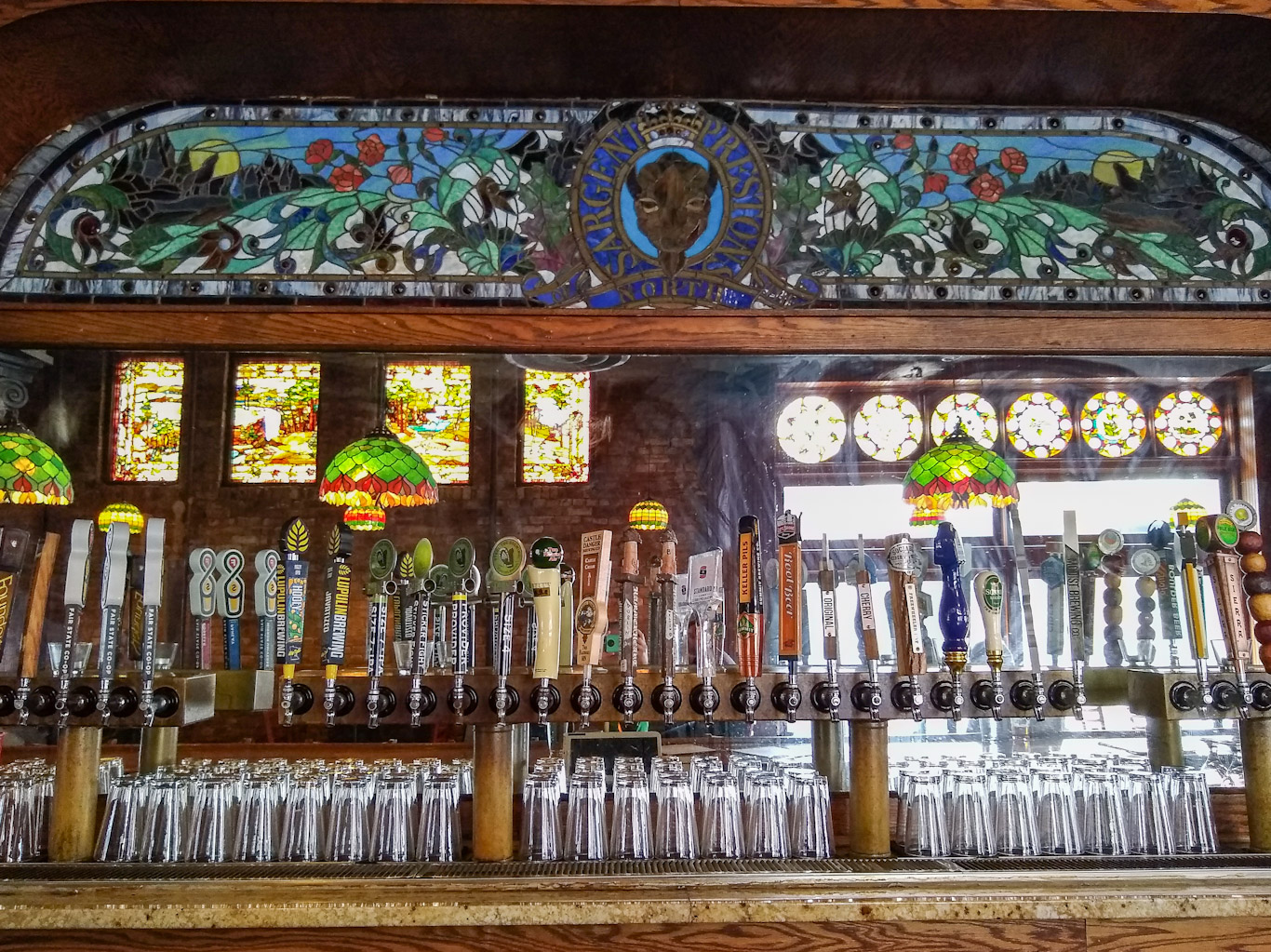 The beer garden at Republic was what initially drew me in as I half walked/half swam through the humid city. The shady trees and brick walkway had me flashing back to temperate afternoons in Bavaria where people were smiling and knocking back half liters of lagerbier. I was about to seat myself in one of the many open tables, but I had to see the inside first. As if the air conditioning wasn’t enough to convince me to change my seating location, the ornate wooden backbar and charming stained glass beckoned me into a barstool. A few glances at the tap list assured me I was right where I needed to be. The barkeep was kind, and helped me navigate the foreign menu.

RAUCHBIER!! It had been far too long since a full strength smokebier touched these lips. Hammerheart Weltenwanderer Rauchbier satiated my taste buds in all the right ways – another sign that an AM beer was a good choice. I followed it up with a delightful Keller Pils from Summit Brewing, and few other samples from their lengthy tap list. I’m not a huge cider fan, and most certainly not a fan of spicy beverages (with the acception of bloody marys), but the Blake’s El Chapo Tequila Barrel Aged Mango Habanero Cider blew my mind. It was perfect parts of everything, resulting in a vivid display of tamarind candy and fresh mango coated with chili powder. Ciders like that threaten my reputation of exclusively ordering beer at bars. It was my send-off back into the thick Minneapolis air. 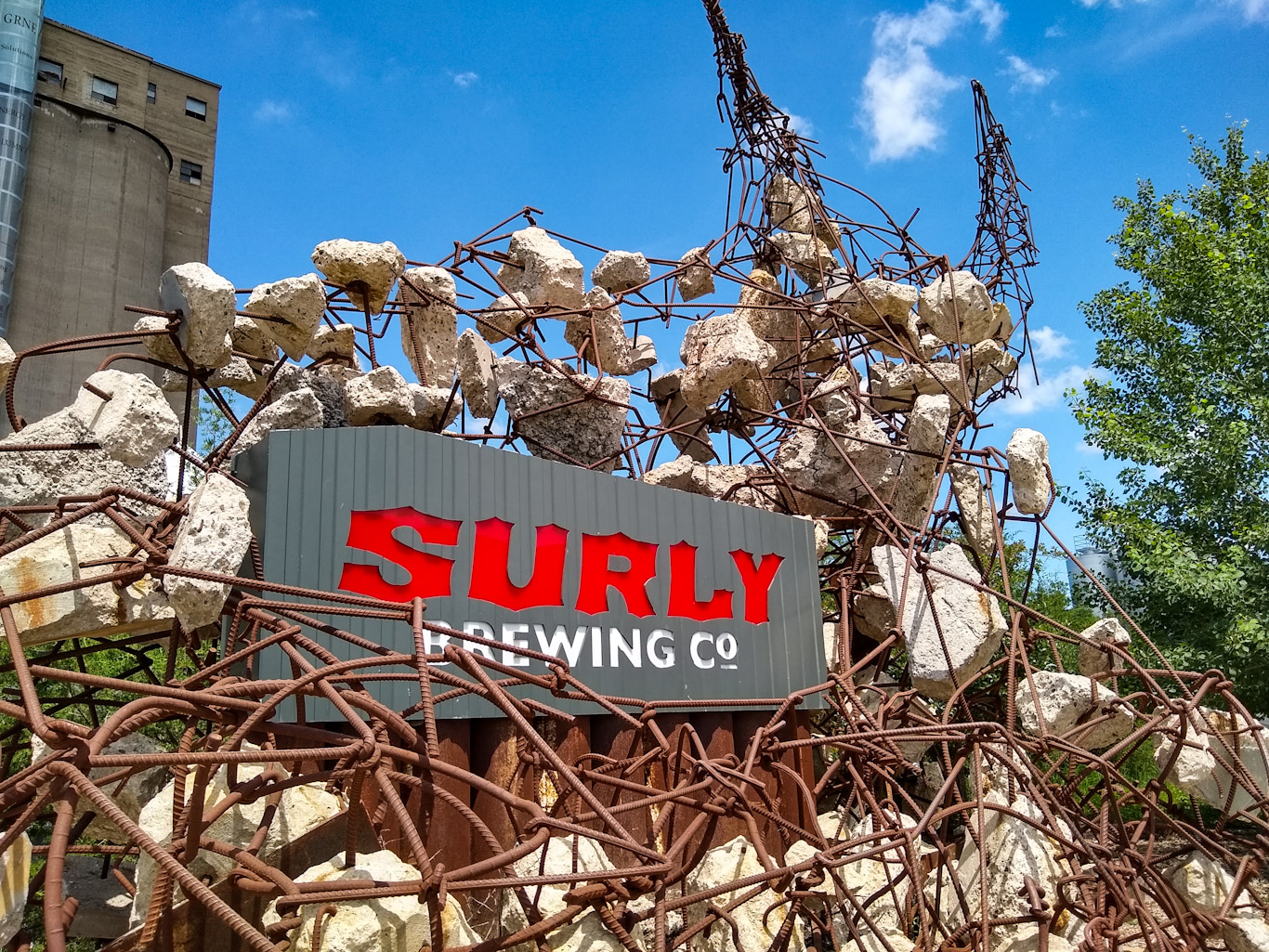 It was a short walk and ride on the light rail to Surly from Republic. A gentle day buzz was already wringing the stress of mundane life from my bones in the form of sweat drops. My only goal for the next few hours was to watch the Women’s World Cup semi-finals with a beer in hand. Surly’s beer garden, equipped with a jumbo screen and booming sound system, was the ideal viewing environment for the game. I wrangled up a Rosé Lager and an Aki’s Breadhaus Pretzel right before the coin toss. By halftime, I was losing my voice, and the sweat soaked into my shirt was probably enough to fill the two pint glasses I drained. I was so sticky that I went inside to cool off before the second half. Their gift shop was a full-blown retail store. Considering the current state of my t-shirt, I couldn’t think of a better excuse to buy a new one. I snagged some cheap sunglasses, too. It’s not vacation unless you buy cheap sunglasses. 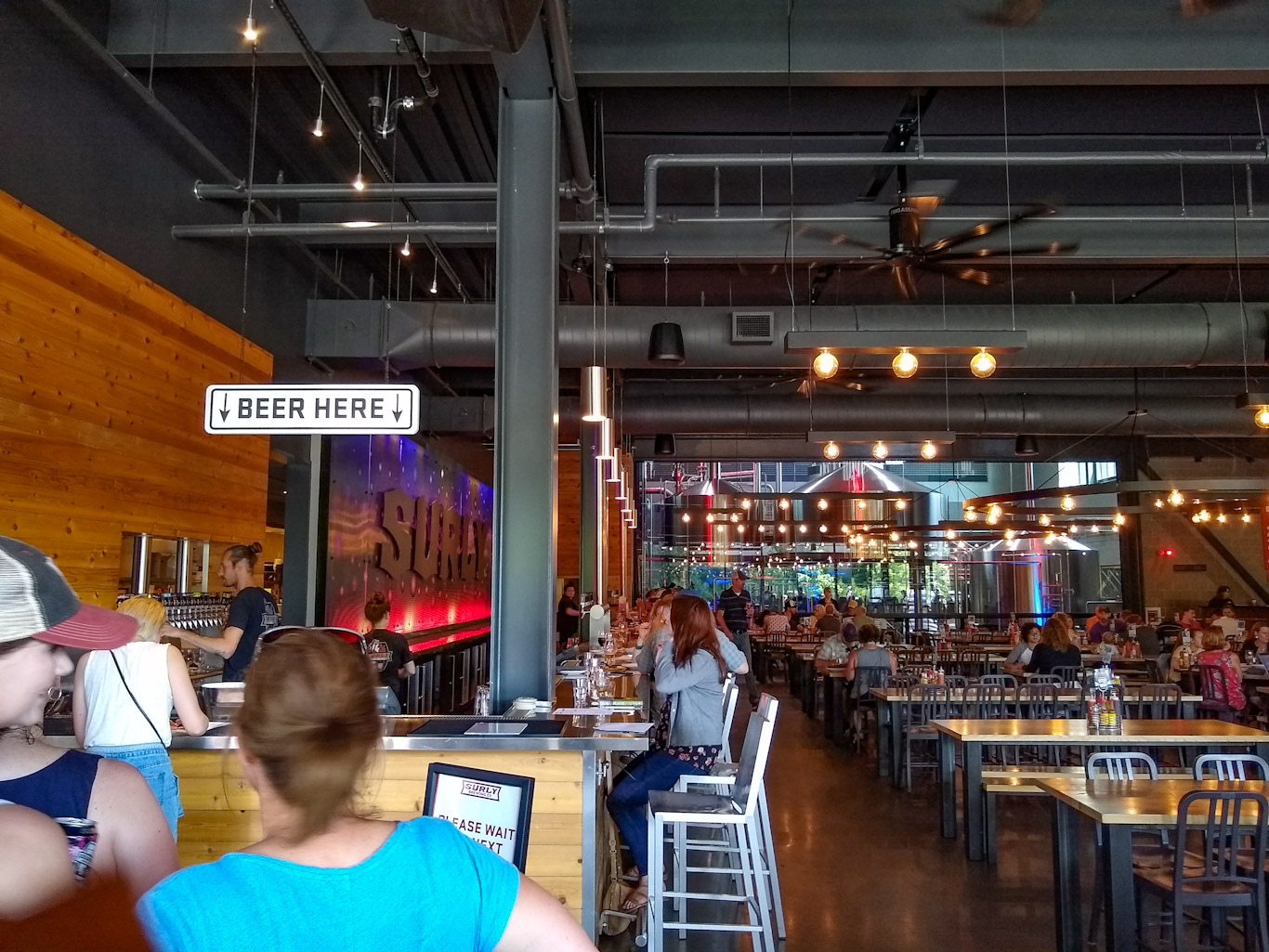 The second half of the Women’s World Cup game was much the same as the first, only it ended in USA victory. U.S.A.! U.S.A.! After the game was over, I finally allowed my eyes to wander and take in my surroundings. The beer garden was split up into different nooks, providing space for corn hole, big group hangouts, or more intimate meetings. The shadier spots were definitely the prime real estate for the afternoon. The indoor seating area was surprisingly less busy than the beer garden. I suppose my hardened desert skin prefers it when water and air are separate things, but the locals didn’t seem to mind when their air was half water. Whatever. More cool air for me. The indoor space had a long, classy bar saturated with staff waiting to serve you the good stuff. More than adequate seating was available for the current crowd. I took a few minutes to rehydrate and simmer down.

My friends from Salt Lake would arrive at Surly shortly, and then the true cavorting would begin. All the beers we tasted were solid. From the subtle Hell to the tropical Stunner, everything was clean and clearly made with an emphasis on quality. It was a great place to spend the entire afternoon, and a more than ideal start to a week and a half of eating, drinking, and living the good life.

Check back in two weeks for more drinking and less sweating on my Midwest road trip!