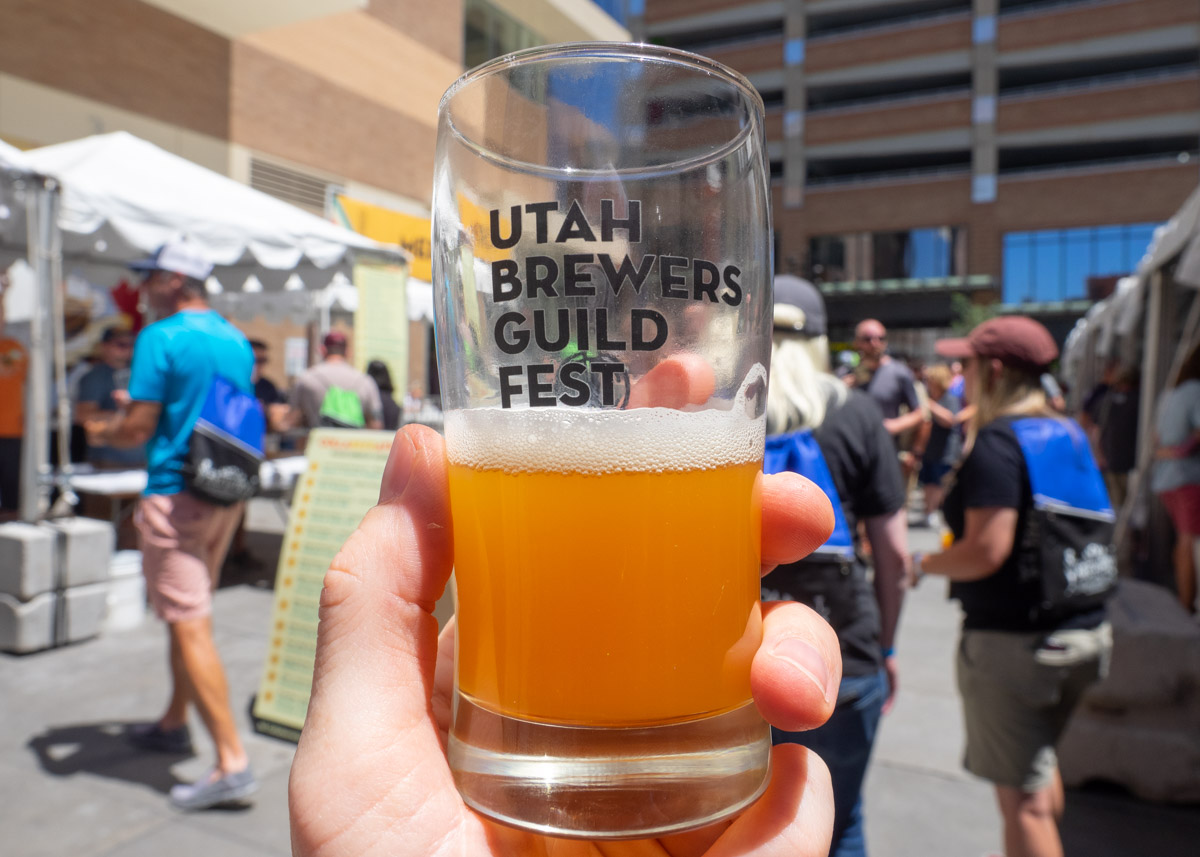 When Utah’s brewing community comes together, magic happens. The first ever Utah Brewers Guild Collaboration Festival was a veritable love fest between brewers and their many fans. Good vibrations were shared by all as the fruits of 24 breweries’ collaboration labors flowed from the taps and into the glasses of smiling imbibers. Fourteen brand new beers made their debut, proving just how incredible Utah’s craft beer scene has become over the years. We may live in a desert, but it ain’t dry!

As I spoke to the many brewers who participated in the collaboration brews, it was clear how into it they all were. Some were long-time friends excited to finally work together, while others looked to break out of the norms of their usual brewing routines. Most saw it as an opportunity to be embraced, and they made the most of it! It was fun to see how many were willing to do something a little bit crazy. The array of creative, quality beers to be enjoyed at the festival was impressive to say the least. It seemed that each brewing team was able to utilize their individual strengths and take it to another level. Bravo!

I sampled and enjoyed every single collaboration beer at the festival, but a few were extra memorable. My favorite was the Chili Mangose brewed by Hopkins Brewing and Salt Flats Brewery. The robust flavor and aroma of the grilled serrano peppers they used gives the beer a pleasant spice without taking over and allows the sour mango and salt to have a moment of glory too. The Mandarina Kölsch by Ogden breweries, Cerveza Zόlupez and UTOG, is another inspired creation. The aroma brought back memories of childhood and bowls of Fruit Loops taken with cartoons on Saturday mornings. Brewed with German Mandarina Bavaria hops and blood orange, the beer could certainly take the place of that glass of orange juice at breakfast. The audacious Berliner Weisse brewed with guava, coconut, and mint by T.F. Brewing and Shades Brewing made a real splash at the festival. The sour beer had an exotic flavor that demanded attention. 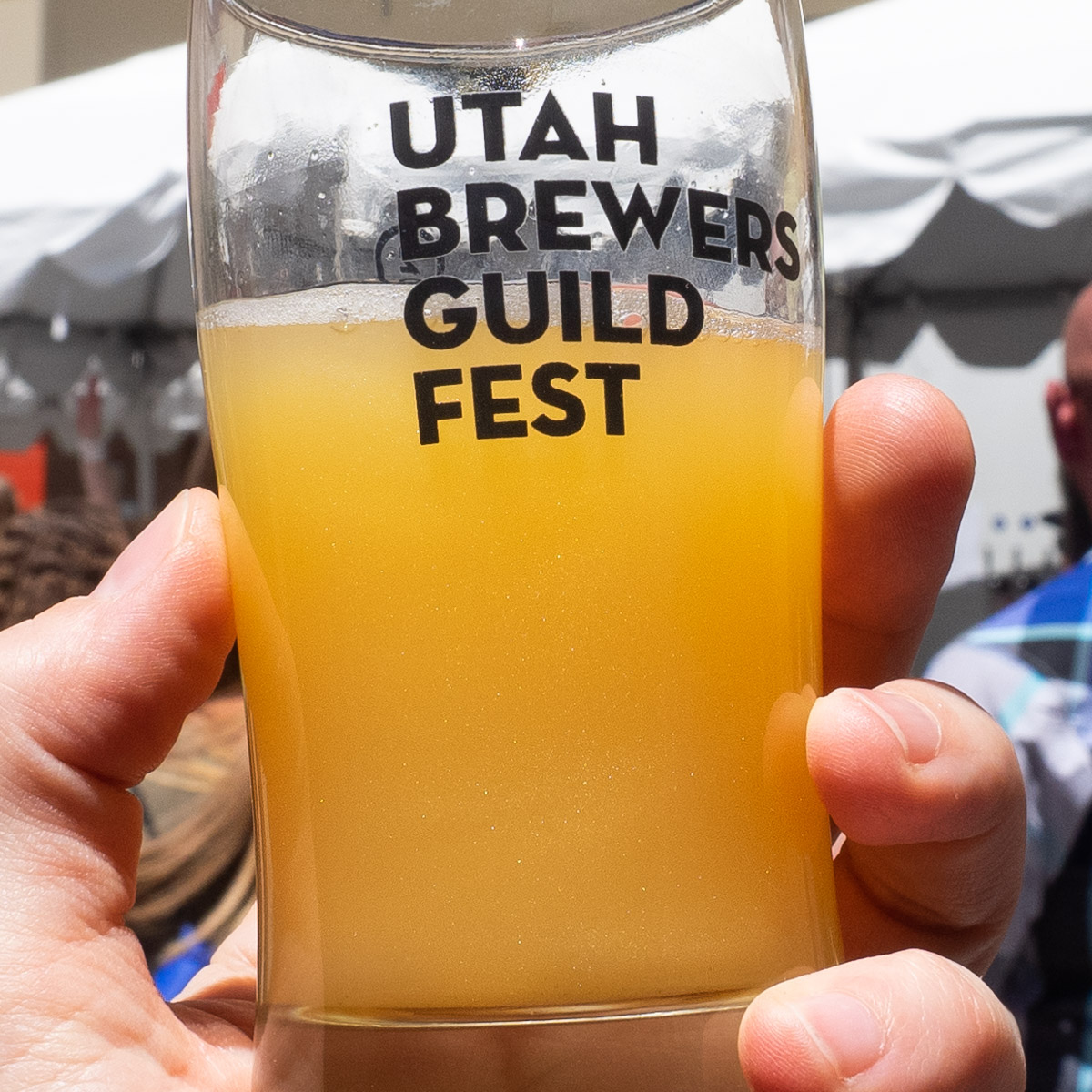 The Battle of the Milkshakes

I don’t have a graham cracker crown to hand out to the winner of the Key Lime Milkshake IPA throwdown, but I do want to compliment the brewers involved for not wavering from their plans when they found out another brewing pair had the same idea. They may have claimed the same style title, but these are two very different beers. “We Can Teach You, But We’d Have to Charge” brewed by Kiitos Brewing and Roosters Brewing is bold, brash, and in-your-face while Squatters Pub Brewery and SaltFire Brewing’s “There’s Only Room in This Town For One” is a picture of subtlety, restraint, and balance. If you enjoy a glittery lime punch in the face beer that begs to be thrown into a slushee machine, the Kiitos/Roosters is your jam. If you’re keeping it cool, enjoying the play of hops and malt with a twist of lime, go with Squatters/Wasatch.

None of the collaboration beers were boring, but some brewers chose to walk on the wild side. The Roof Tank Gin Saison from RoHa Brewing Project and Toasted Barrel Brewery employed open fermentation in a tank that was on the roof of the RoHa brewery. Open fermentation is a traditional method that invites wild yeast and other passing organisms to the party but isn’t commonly done in modern commercial settings. The saison was rested in Beehive gin barrels for hints of botanicals. Bonneville Brewery and Hoppers Brew Pub made a smoked cherry ale with Utah cherries from Woodyatt Farm in Willard and local cherry wood smoked malts from Solstice Malt. The result is an amber-colored beer with rich flavors of dark fruit, smoke and a touch of tartness from the cherries. 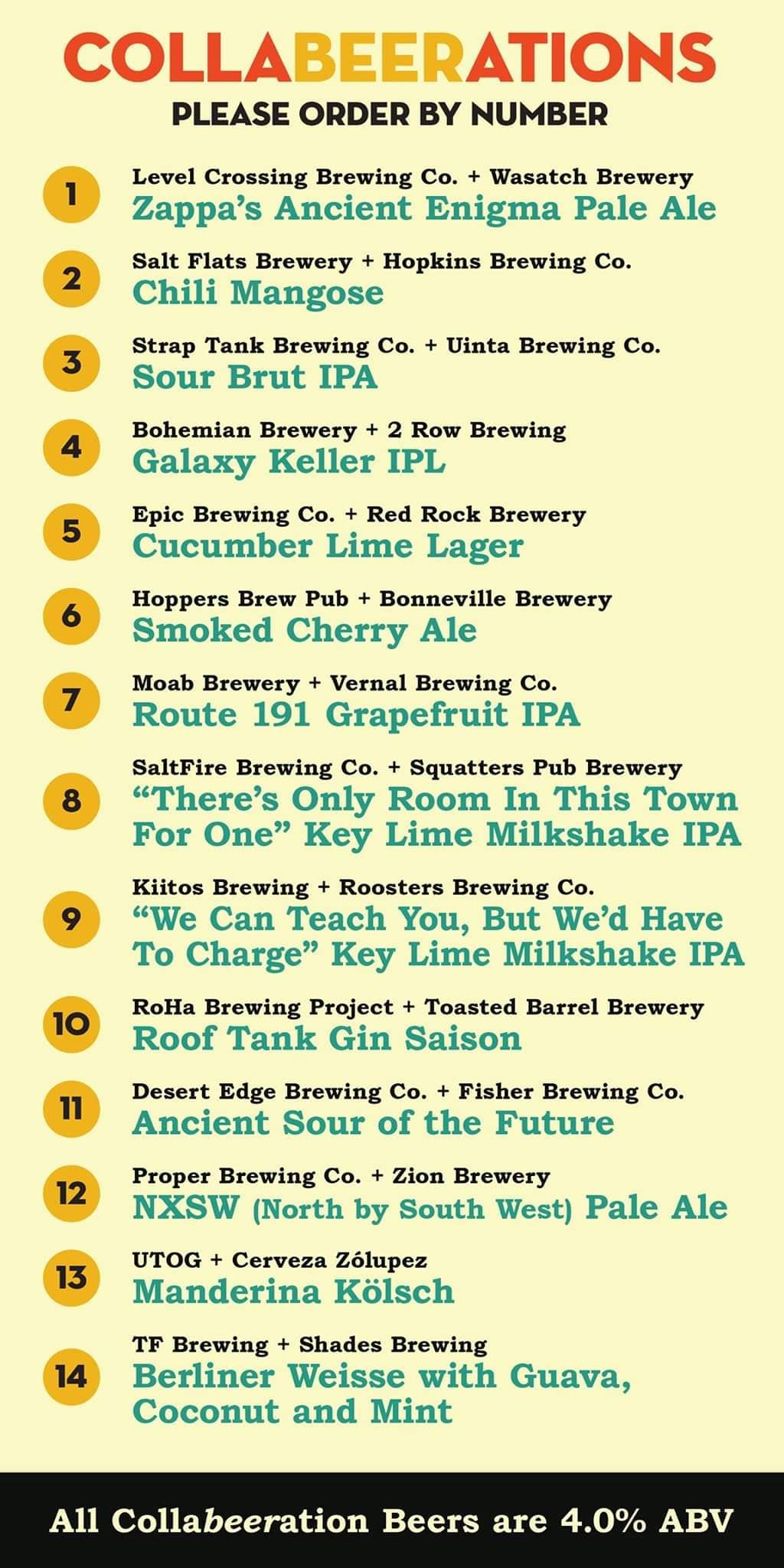 The warm sunny day of the festival called for summery beers, and the collaboration lineup delivered. Every selection was crushable and perfectly made for drinking on a hot day. The Galaxy Keller IPL by Bohemian Brewery and 2 Row Brewing was hella smooth with tropical fruity hops. NXSW Pale by Zion Brewery and Proper Brewing was a sour juicy pale that finished crisp and dry. For fans of fresh cucumber, the Cucumber Lime Lager from Red Rock Brewing and Epic Brewing used cold-pressed juice from Vive Juicery in Salt Lake City. The list goes on!

The Utah Brewers Guild Festival was hands down one of the better beer festivals I’ve attended; certainly, the best in Utah. I loved the focus on local breweries and the simplicity of the 12-punch passport. We drank delicious, original brews from real glasses and cavorted with beer friends from all corners of the state. If you missed out, get down to your local breweries and try these collaborations before they’re gone. You might want to call ahead to make sure they’re available before heading down. And for the love of the beer gods, don’t miss out next year! 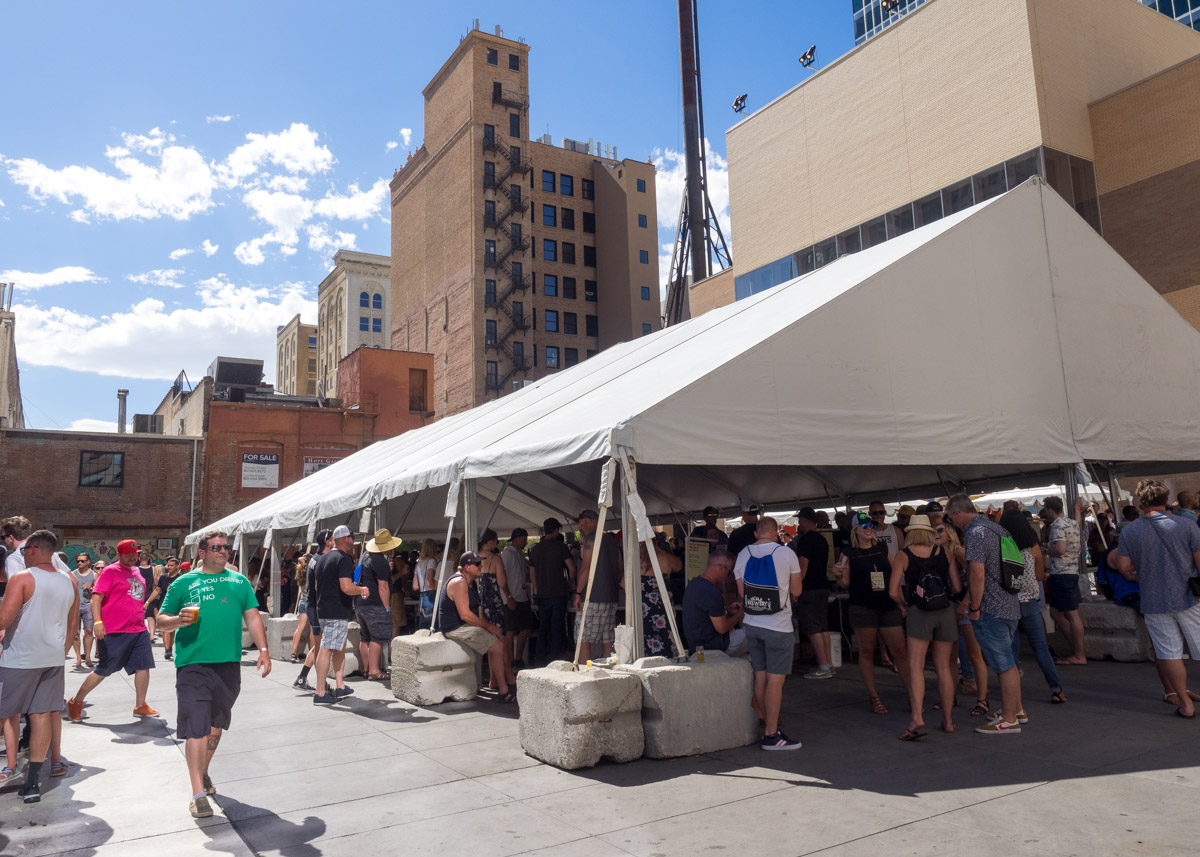