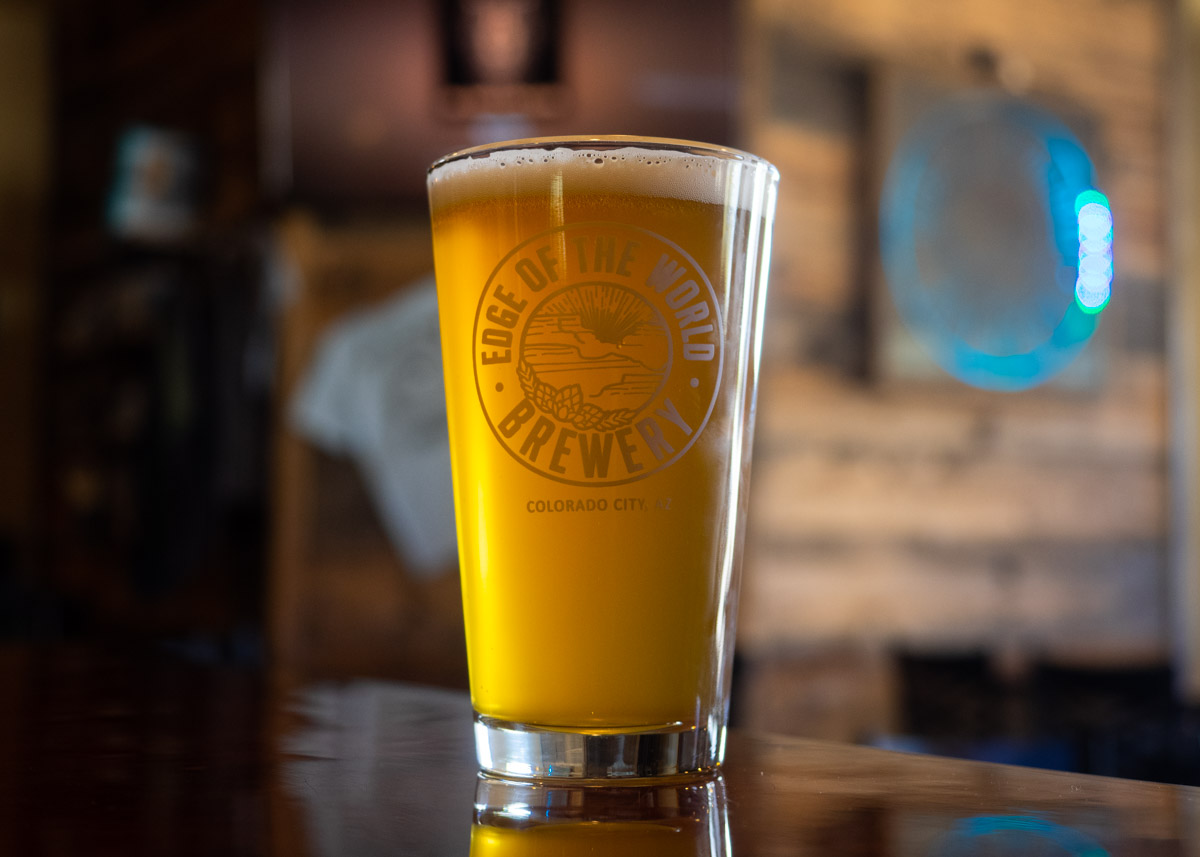 For a century, the community known as Short Creek, has been home to the FLDS Church (Fundamentalist Church of Jesus Christ of Latter-Day Saints), a sect that broke away from the mainstream LDS church when it stopped practicing polygamy. This group of polygamists has lived in the Utah/Arizona border towns of Hildale and Colorado City in a state of relative isolation from the rest of society. When its prophet and leader, Warren Jeffs, was arrested in 2006 and convicted of child sex crimes, things started to change. Now, the twin towns are home to the Colorado City Music Festival and the Edge of the World Brewery (opened in April 2018). That there could be a music festival or a brewery in this polygamist community was completely shocking to me. I had to see it for myself. 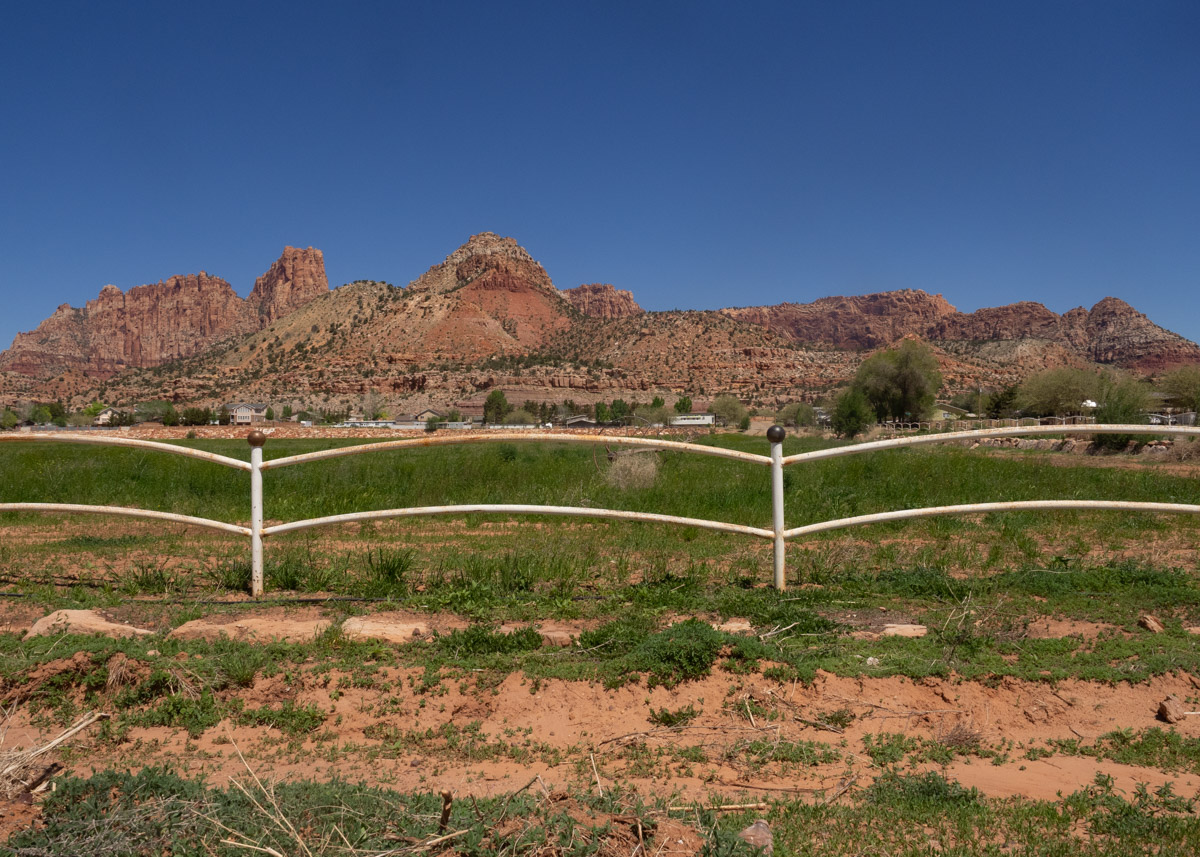 The 3rd annual Colorado City Music Festival took place on April 27th, 2019. I bought my ticket and booked a room at the Zion Suites of Hildale for the weekend. When I arrived, I was surprised to find that my “hotel” was a former Jeffs mansion converted to a bed and breakfast. It’s a maze of hallways, stairs, and rooms. My imagination ran wild thinking of the kind of family that may have lived there. The mansion is surrounded by a brick wall with views of the Vermilion Cliffs just beyond it. The scenery is quite stunning. It’s a shame that it’s been so closed off to visitors until recently. What a beautiful place to wake up and find yourself in! 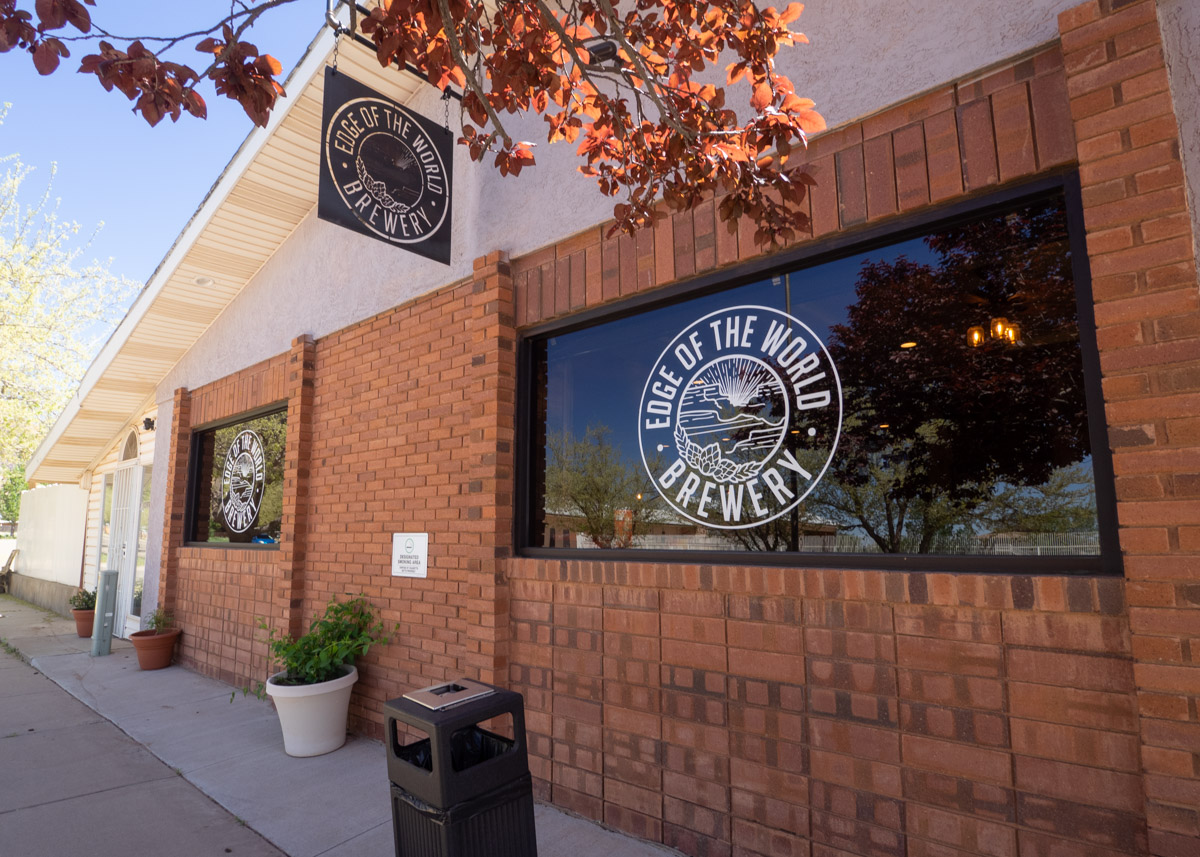 After checking in to my room, I drove the wide streets to Edge of the World Brewery for dinner. The town itself seems rather desolate with small signs of life beginning to take hold. The brewery isn’t much to look at from the outside, but as I walked through the door, I found a refreshing atmosphere of normalcy and comfort. The tables were filled with the standard mix of beer-drinking folk of all ages including some moms with babies. It’s casual, but very put-together. 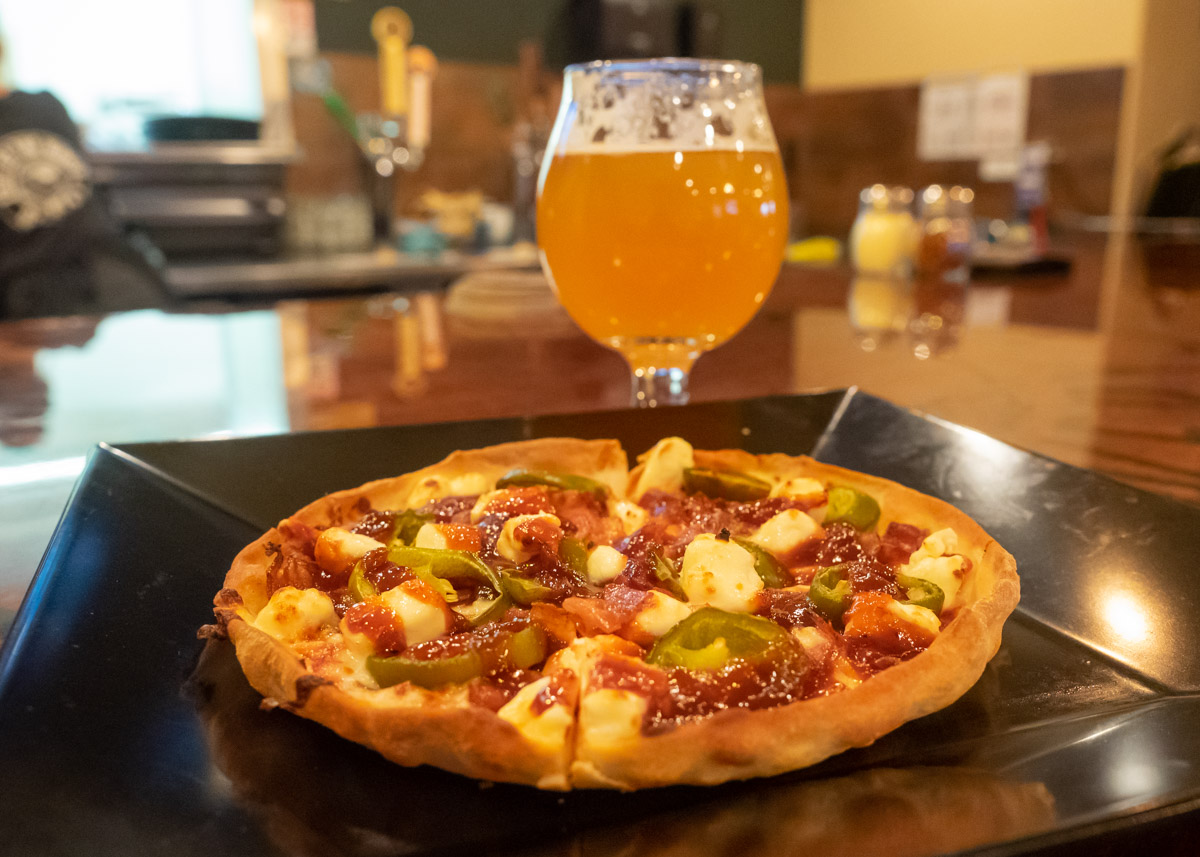 I sat at the bar and ordered the pale ale and a jalapeño popper pizza. I wouldn’t normally order a pizza with BBQ sauce, but combined with bacon, cream cheese, and jalapeños, it was delicious! I also tried the buffalo wings coated in a gooey, spicy sauce that had me gulping down the beer. I quite enjoyed my second beer, the IPA, with its citrus hop flavors nicely balanced by a solid malt character. Because the brewery is on the Arizona side of the border, draft beer isn’t limited to 4% ABV and none of Utah’s strict alcohol laws apply. Sweet! 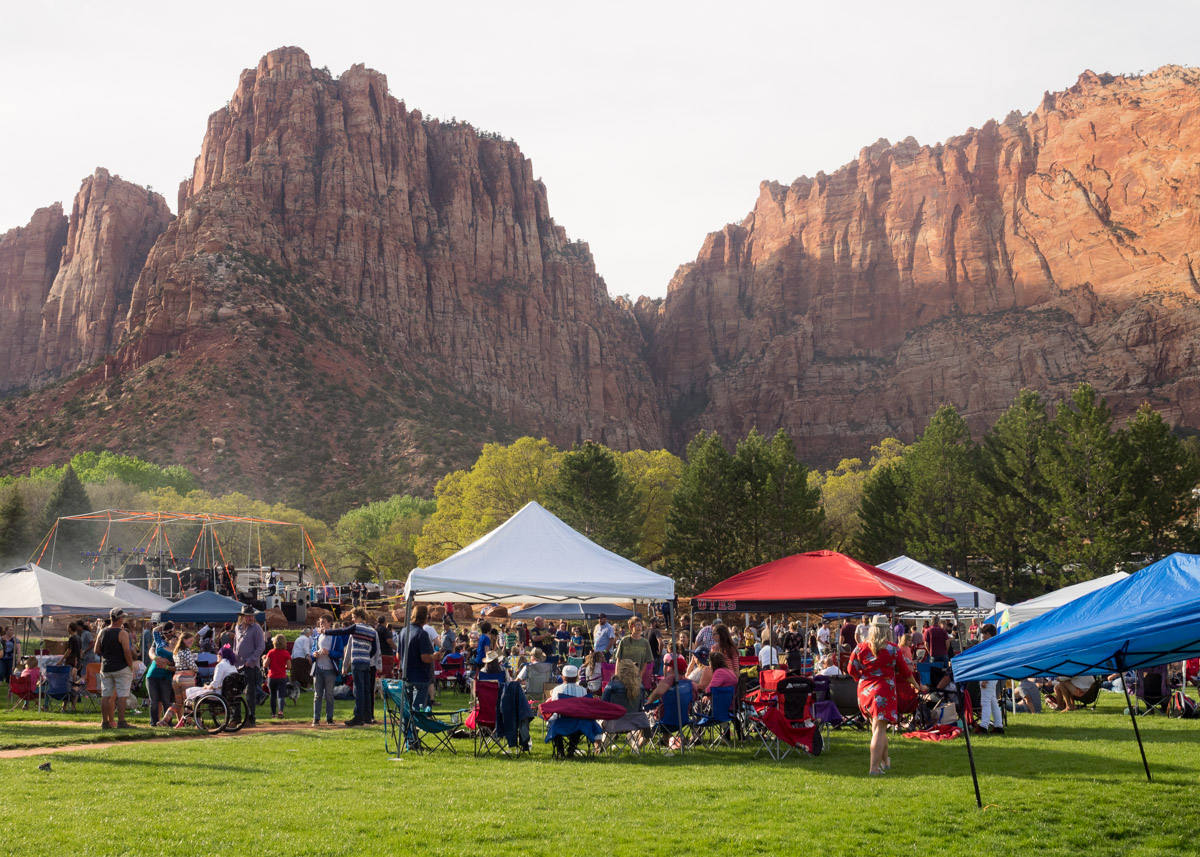 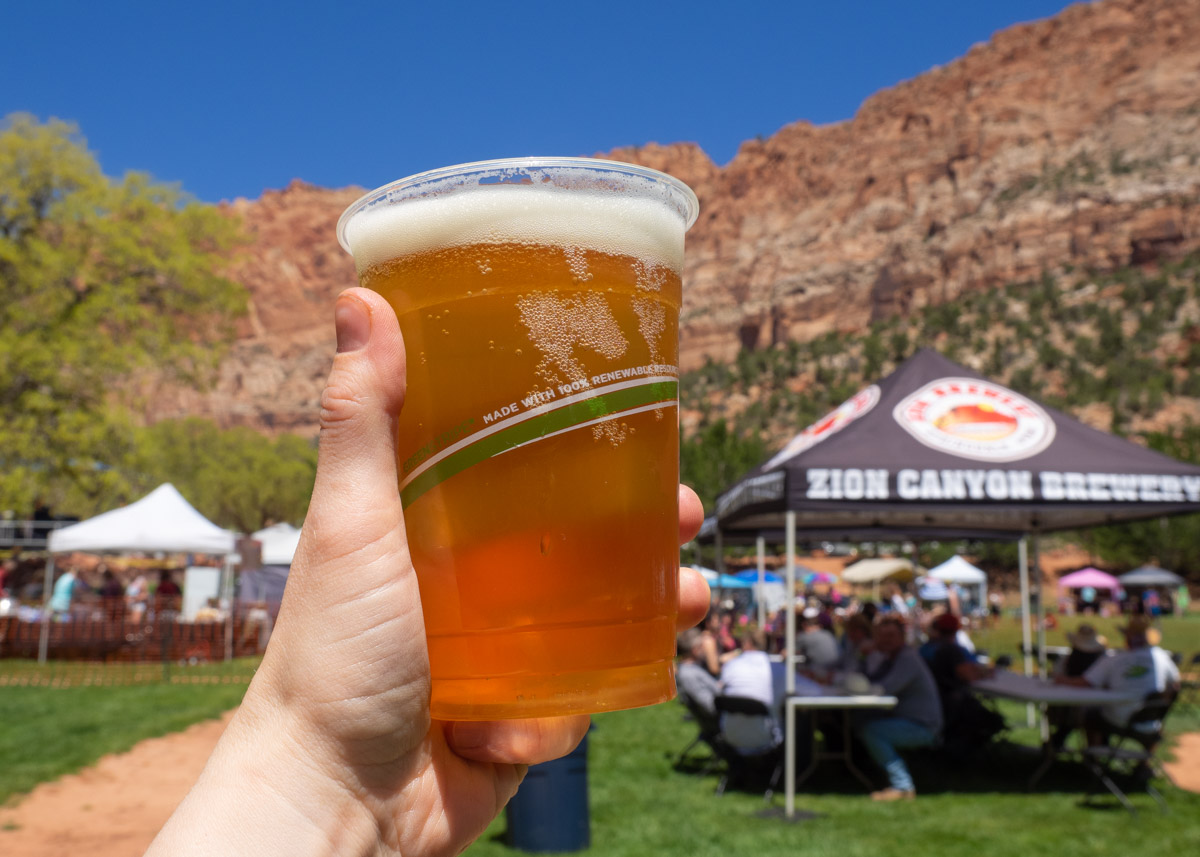 On Saturday morning, I drove a dirt road a short distance up a canyon just outside of town to Maxwell Park for the music festival. My jaw dropped when I saw the venue. The park is encircled by towering red rock faces that provide a gorgeous backdrop for its wide expanse of lawn rimmed with shade trees. There was a stage at one end with numerous vendor-filled tents along the periphery. Food trucks set up shop in the adjacent parking lot, and a beer garden was erected in the baseball diamond. Zion Brewery was on hand to provide the beer for the event and boy did it flow! Festival goers drank every last drop forcing the brewery to close up shop early. Damn, y’all can drink!

The music was a mix of rock, blues, country, and folk featuring many local acts from the area. Salt Lake City’s Royal Bliss was the headliner. Musician Tom Bennett, who currently lives in St. George, is the man behind the Colorado City Music Festival. He saw the need for a unifying event that would bring fun and laughter back to Short Creek. With so much upheaval in its recent past, the musical festival is a balm to the community. I was amazed to see a relatively diverse mix of people having fun together. There were young, old, and four-legged family members dancing, eating, and drinking the day away. I noticed an FLDS presence, but not a prairie dress was in sight.

I rose on Sunday morning excited to go back to Edge of the World Brewery to meet two of the people behind it, Maria Jessop and Ray Hammon. It was Maria’s cousin, Levi Williams, who dreamed of starting a brewery and began homebrewing with his friends Ray and Nick Dockstader. As the dream took shape, Levi asked Maria, who has restaurant industry experience, to take on a management roll. A fifth partner, Gwen Darger, who owns the Berry Knoll Bakery next door to the brewery, takes care of all the food. Their partnership created the only bar that exists in what was an extremely conservative community. It’s also the only drinking establishment of its kind for miles around.

The transformation that has come to Colorado City in recent years has been drastic and rapid. “I thought it would take a good 5-7 years to see the change we’re already seeing now,” Maria tells me. Ray adds, “I think the biggest thing that’s lead to the most change is that all of the land was wrapped up in a trust, and now they’ve started to privatize that trust. That’s what is really leading to the change in demographics.” Many polygamist families have moved away, and formerly exiled ex-FLDS and other outsiders have moved in. That trust, the UEP (United Effort Plan), was how the FLDS church maintained ownership of the town. The church also held a tight control on local government. “This last election cycle (2018) was the first time we had an open election,” Ray explains. “Before, it was mostly just church controlled. The church would appoint people to run for government, and then they would get up on the pulpit and say, this is who you’re going to vote for.”

Hildale got the ball rolling a little earlier than Colorado City and was able to flip several city council seats and elect a female ex-FLDS mayor in 2017. Both towns were found guilty of religious discrimination in 2016 when non-FLDS citizens claimed they were denied access to city services. A court monitor was appointed to protect residents’ constitutional rights, and even the Marshal’s office has been restructured with a police force from outside the community so that it can no longer function as an arm of the FLDS church. Currently, Colorado City still retains its majority FLDS-controlled city council. “When we first approached them for the license here, they gave us a unanimous thumbs down,” says Ray. However, the Arizona State Liquor Board elected to grant the license anyway. Being on the Arizona side of the border has its advantages indeed! 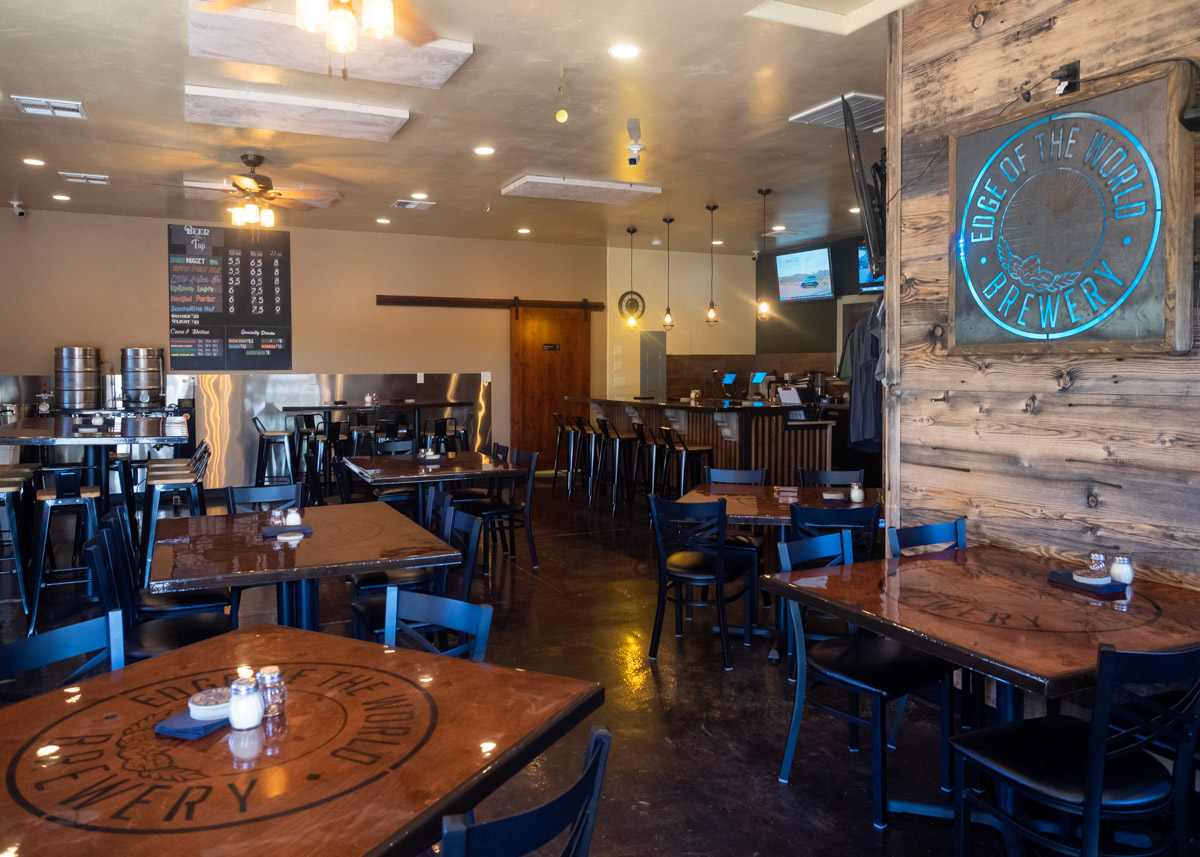 Despite its conservative history, Short Creek has a healthy drinking culture, as evidenced by their ability to drink Zion Brewery out of beer at the music festival. There are many successful business people living in the area and a steady flow of travelers on their way to the Grand Canyon, Lake Powell, and Zion National Park. Unlike members of the mainstream LDS church, even the local polygamists are known to drink alcohol, though they might shy away from a bar setting. Edge of the World is showing that a drinking establishment can be family-friendly and not at all seedy. They have received overwhelming local support and estimate that about 60% of their business comes from Short Creek locals and those from the neighboring towns of Kanab, Hurricane, and St. George.

Ray serves as Edge of the World’s brewer and has enjoyed introducing locals to craft beer. Many of them were used to Bud Lite and needed some encouragement to try new styles. The brewery has five standards: a golden ale, pale ale, amber ale, porter, and IPA. Seasonals, like a saison brewed with basil and tarragon, have also made their way through the rotation. Eventually, they’d like to do some bottled limited releases, but the current size of the brewery has its limitations. The half-barrel system (just 15 gallons) means that only 3 of their own beers are available at any given time. They supplement those with guest taps from other Arizona breweries.

Opening the brewery has been quite the learning experience for all involved. Ray is figuring out how to be a professional brewer. “Professional is a strong word for what we’re doing here. That’s the Rolls Royce of homebrew systems,” he laughs pointing at the shiny brewing system that lives against the wall of the dining room. While the brewery is closed Monday-Wednesday, the tables get pushed to the side to make room for brewing. Plans for a new 12-barrel brewing system are in the works. With some remodeling, Ray will finally have his own brewing space. He’s looking forward to being able to source better quality ingredients as they increase capacity. Edge of the World is also planning to add an outdoor patio space and hopes to host musicians and events and get more involved in the community.

I honestly didn’t know what to expect when I planned my trip to the Colorado City Music Festival and Edge of the World Brewery. I never thought to visit Short Creek because I assumed outsiders weren’t welcome. But I received a warm reception and was struck by how normal and full of life this place is becoming. I had no idea how close Hildale and Colorado City are to some of my favorite mountain biking trails (Little Creek Mesa and Gooseberry Mesa). That, along with the beauty of the scenery and proximity to popular national parks, gives me the feeling that it will soon become more than just a place people pass through on the way to somewhere else. It will be a destination in its own right and cease to be a lonely town at the edge of the world.