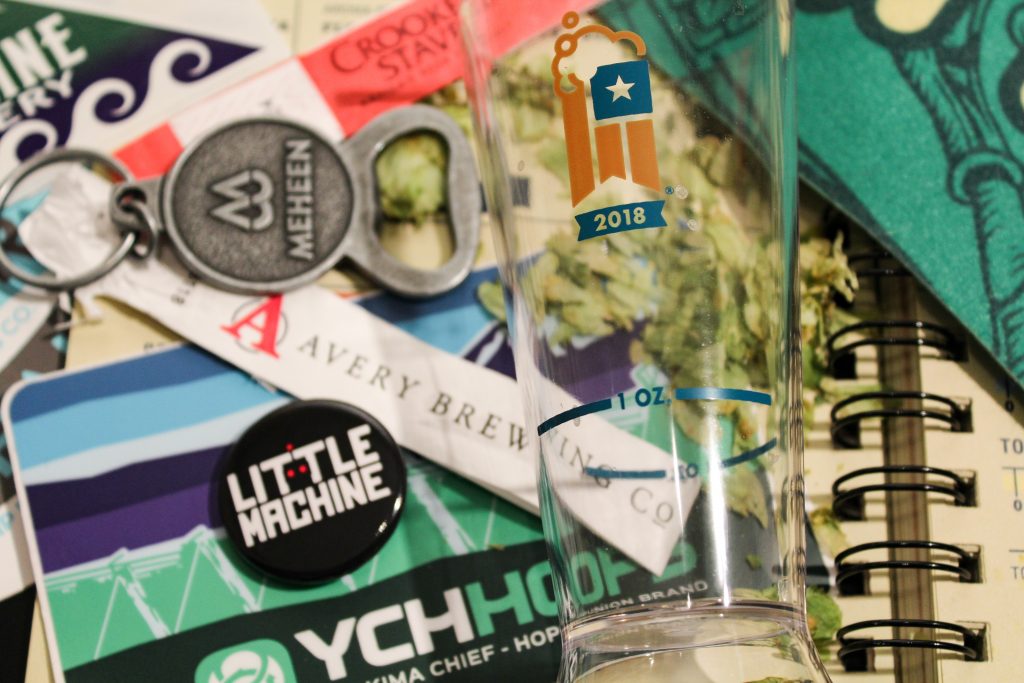 I have long been told the GABF experience is more than the sessions in which thousands of people lose themselves in a massive room, 1 ounce at a time. The majority of my 2016 and 2017 experiences included attending every session, with a few stops around Denver breweries and bars to supplement. This year, the pyramid of priorities was upended in favor of non-session adventures. And I must say, they did not disappoint!

Simmer down. Some things stayed exactly the same. My best friend Julie joined me Friday night, and our plan of attack was exactly how we planned it on the day we met several years before. Drink good beer, don’t drink bad beer – the rules were the same as any beer festival we’ve ever attended. She’s as imperative as pre-fest food or mid-fest water. You’d do well to find yourself a beer fest buddy as good as mine!

Other than visiting a few staple Denver breweries and attending the Saturday night GABF session (and Snooze for breakfast… twice!), the similarities to previous years ends there. Simmer if you must, but The Great American Beer Festival Experience 2018 was as great as any other! 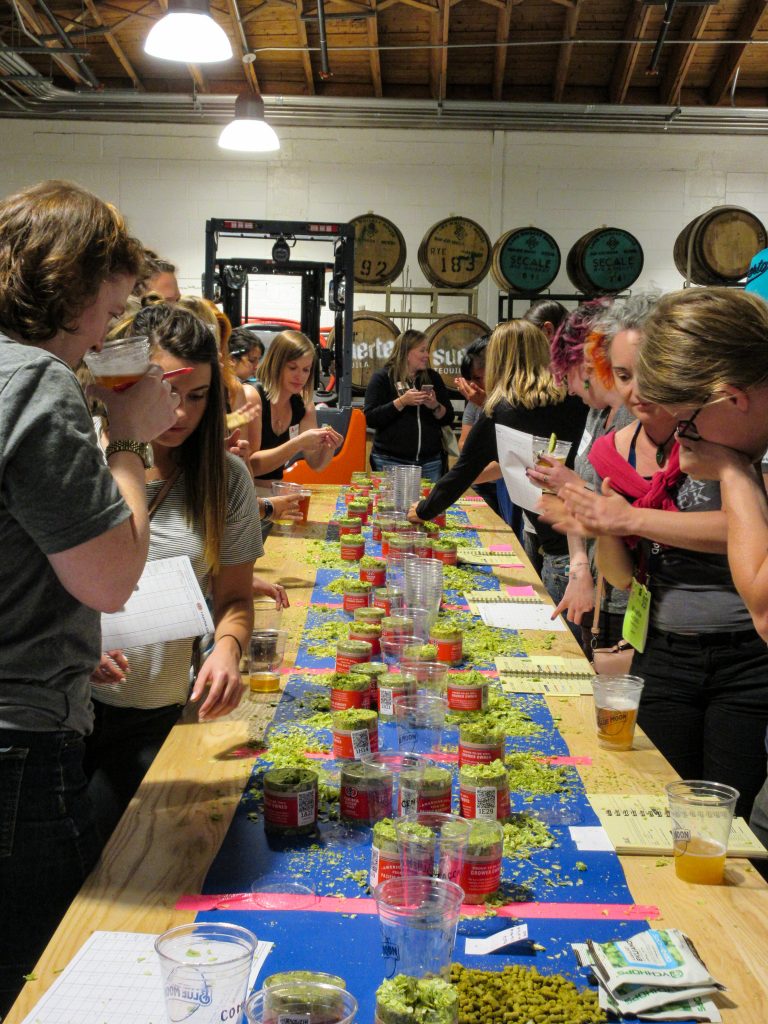 Finally! I wanted so badly to attend this event last year, and managed to make it a priority for 2018. SaltFire co-worker Patrick Bourque and I had a beer and bite at the RiNo Beer Garden before a short walk over to the Blue Moon Brewery where the Pink Boots event was being held. In that short period of time, the heavens decided to suddenly and viciously lash us with wind and rain, as if to say, “Welcome to Denver, bitches!”. I was equal parts rain-soaked and elated as I made it into the gathering of beer-minded brewing industry women. I found old friends, made some new ones, and rubbed as many hops as I could get my paws on. FYI, Ahtanum + Chinook = green tea! At the end of the meeting, a few of us made our own hop blends to be considered for the 2018 YCH Pink Boots proprietary hop blend that will be produced and sold later in the year, with a percentage of the proceeds going to the Pink Boots Society. Shout out to PBS leadership, YCH, and Blue Moon for making this event a success!! 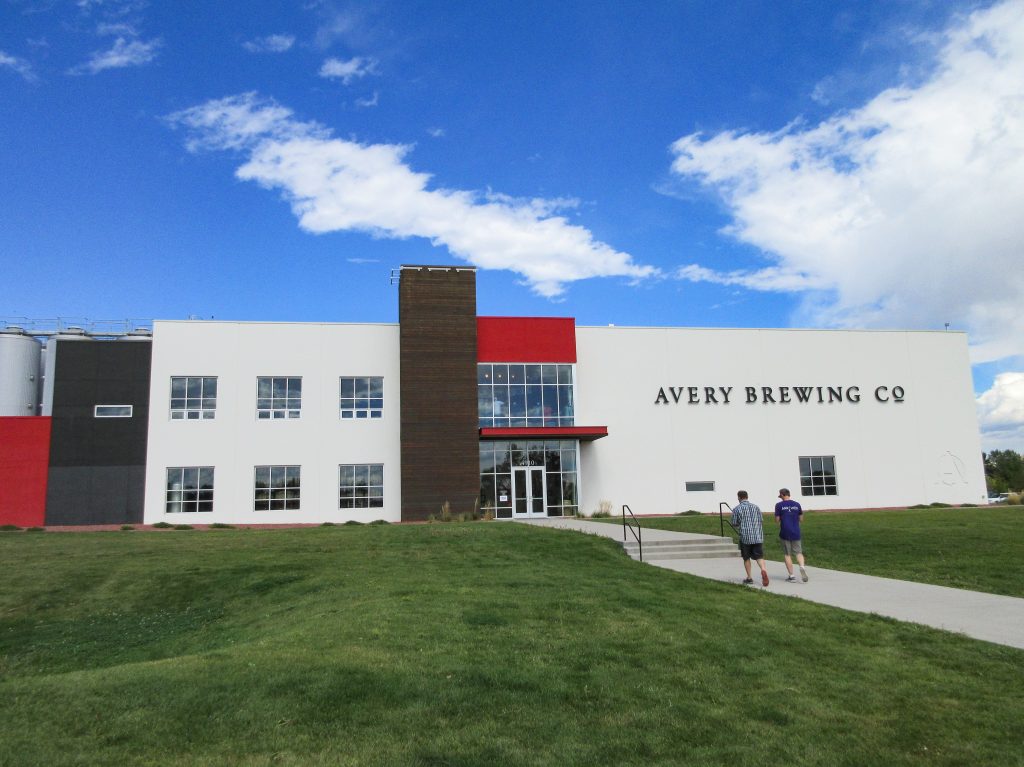 After attending the Wild Goose Canning/Meheen open house (a company which I’m now convinced has some of the best customer support ever), Patrick and I headed over to Avery Brewing Co for an industry appreciation party. We were handed an Avery Lager as a welcome beer, and told everything else was on the house. Food, music, and endless beer laid before our sunshine-dazzled eyes. It has been ingrained in me that brewers are humble rockstars. We should always lay out the red carpet for our fellow brewers, never brag about our accolades, and never ever talk shit on other breweries in public. The industry should strive to foster an environment of brother/sisterhood where we can drink beer and be merry regardless of which brewery we hail from. Thanks for nailing this environment on the head, Avery Brewing, and thanks for teaching me the ways, Kevin Templin! 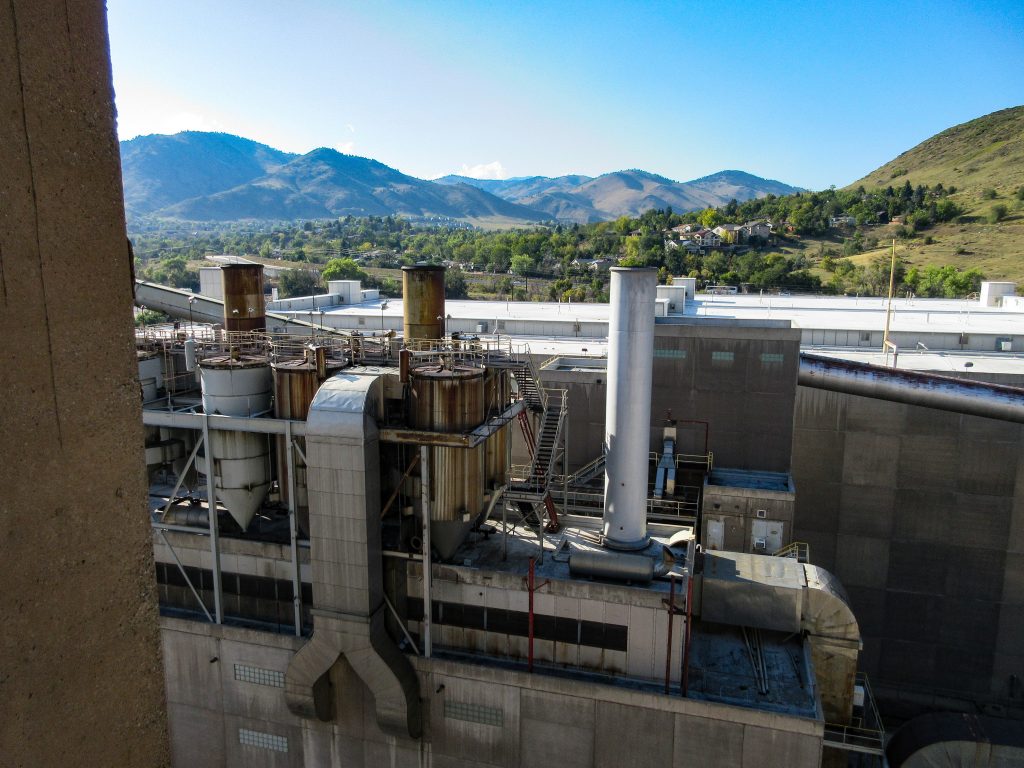 A Big Brewery in Golden, CO

The big, big, BIG brewery that shall remain nameless until I’m positive my photos won’t get someone in trouble was a particularly lovely treat on this trip. A very kind gentleman who used to work at a Salt Lake brewery gave us a private tour of this Golden facility, opening my eyes to brewing methods both new and old. The vastness of this location made it impossible to anticipate if the other side of a door held another room clad with stainless steel, or led you outside to a fine view of the surrounding town. Beyond the many details I managed to latch onto while many others flew over my head, I came away with this: despite the whole idea of craft beer vs. “big beer”, we’re all just people trying to feed ourselves and live a good life. If that looks like making 30k a year sweating over the boil kettle with no health insurance or making 80k a year filtering macro lager with full benefits, that’s your choice, and it’s not a reflection of your character. If you think otherwise, grow up.

Make sure you order with a growling or screaming voice, “I’ll have a HOOPPYYYY SAAIIISSOONNNNNNNNNN!!!!!!!!!”. A few hair flips are also appreciated. 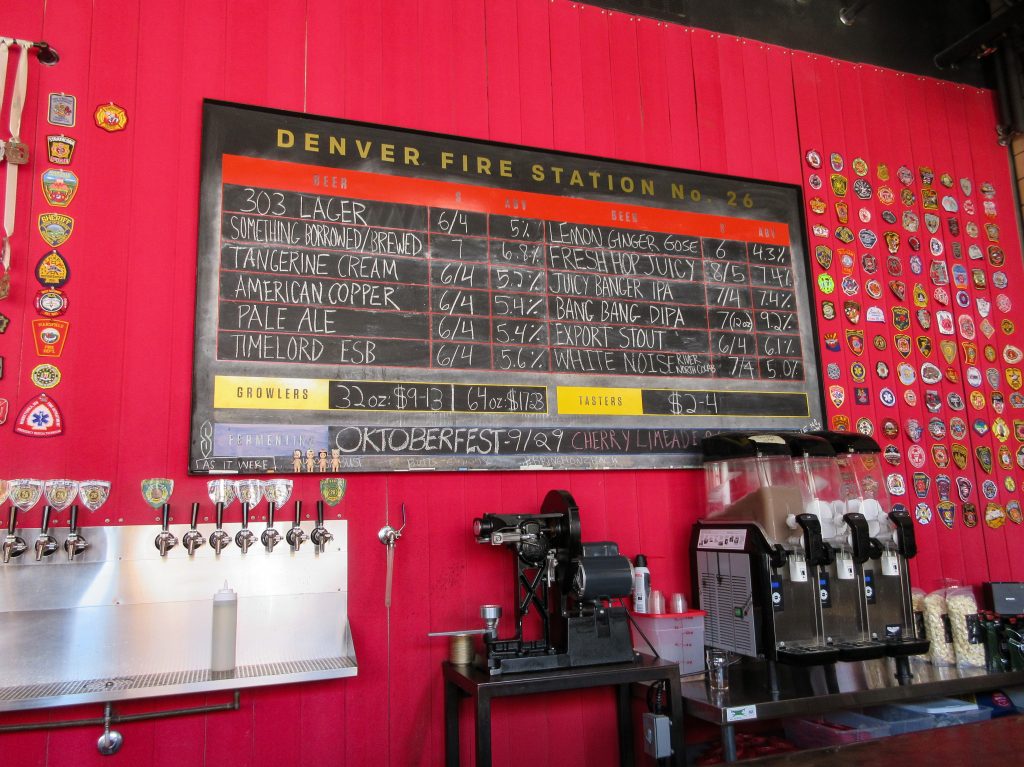 It’s a fire station turned brewery. From the looks of it, they didn’t have to do much to make the place waterproof! I only wish they had a fire-pole… 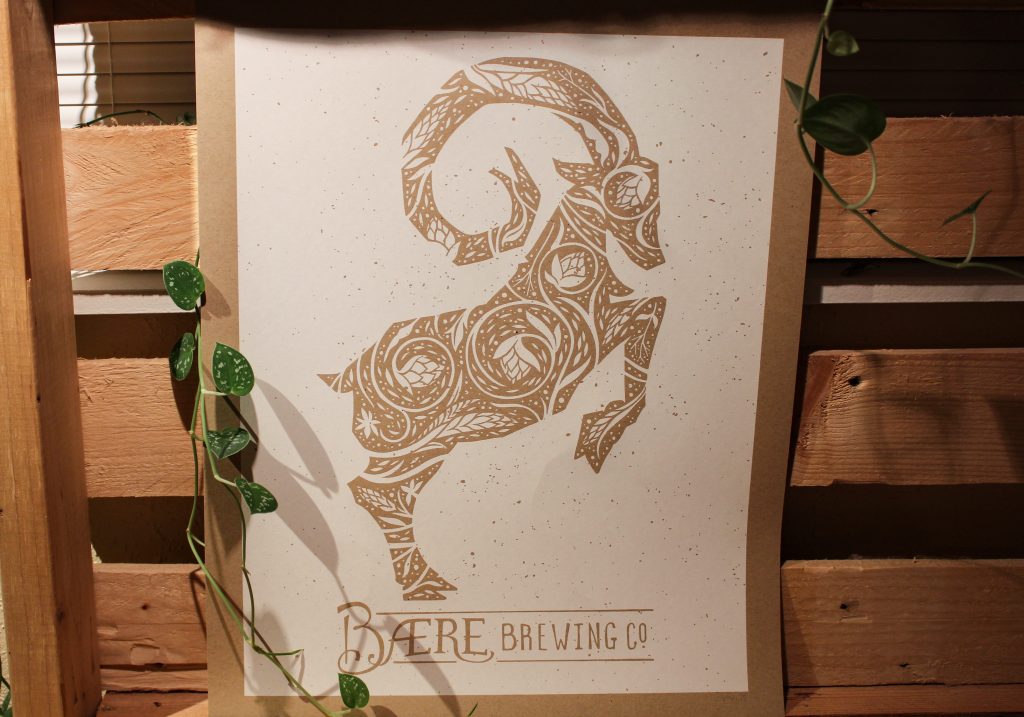 Solid offerings and excellent art on display are what made this place for me. I couldn’t help but snag a print of this hops and barley ram for home. They’re a brewery that understands people also drink with their eyes. Tasty! 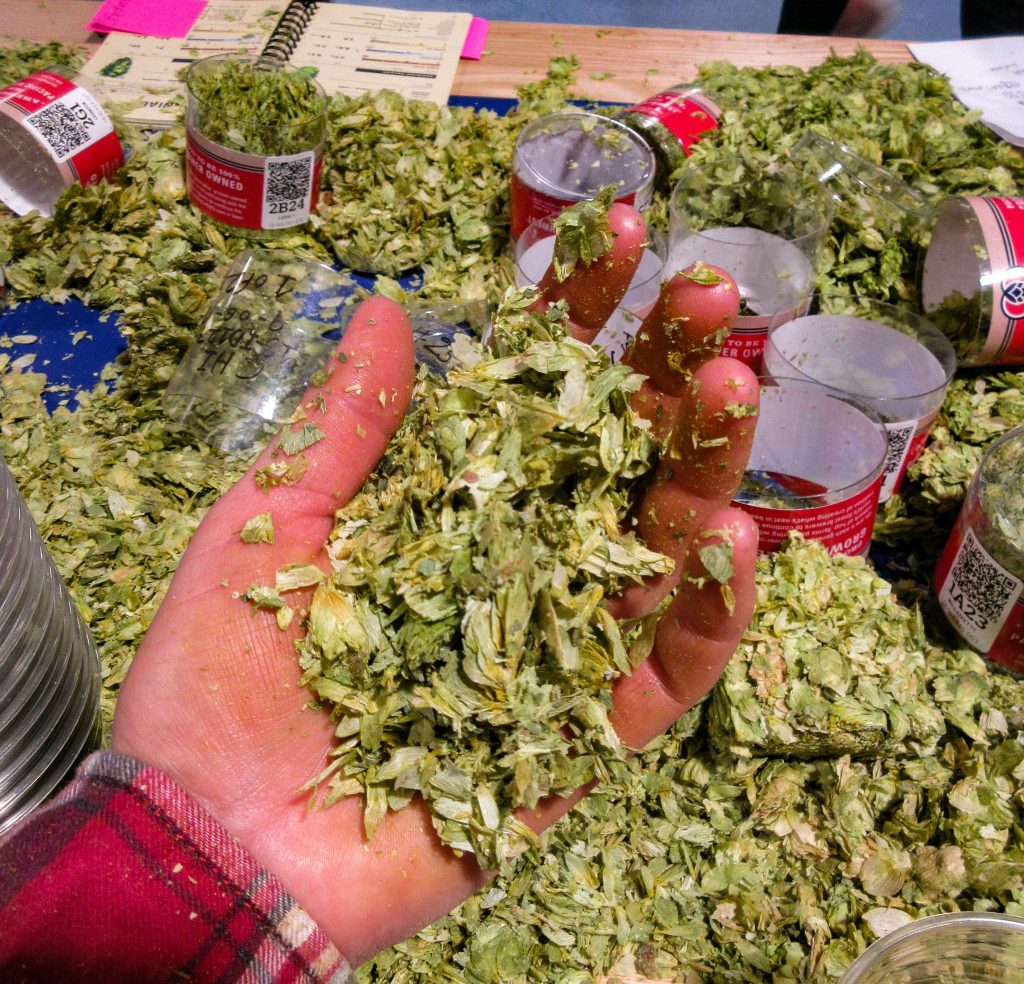 Another year in the books and another compounding hangover I might possibly still be nursing. Thanks, Denver! See you in 2019!