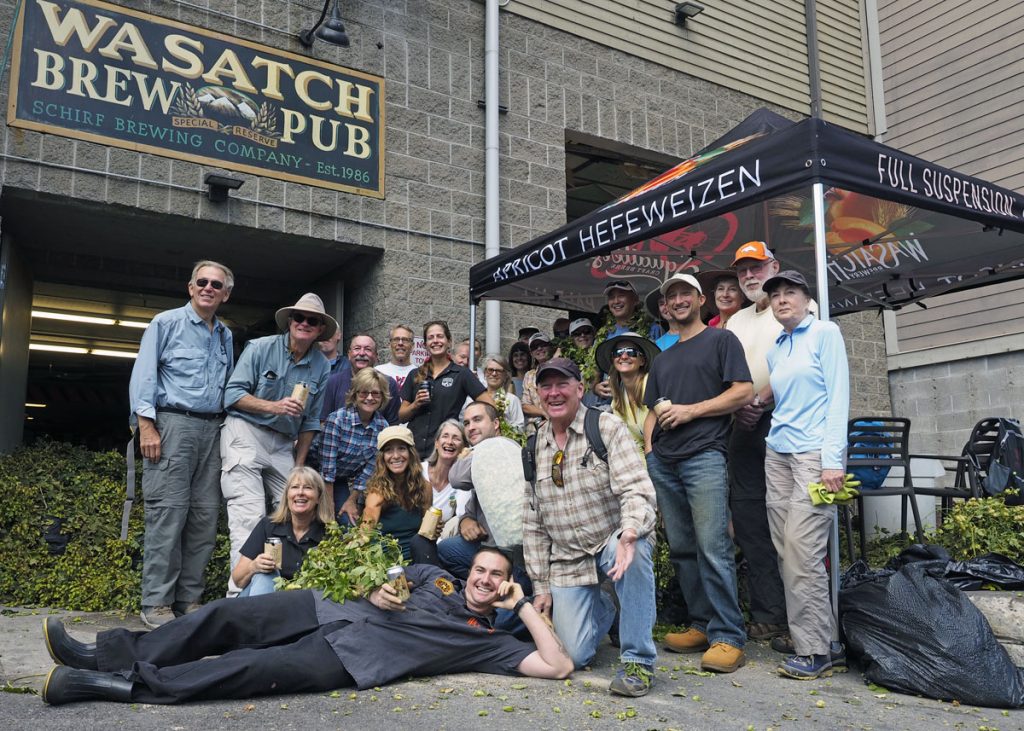 These helping hands of Park City, Utah, under the auspices of the Summit Land Conservancy, brought in the harvest of local wild hops to make this year’s version of Wasatch Brewery’s Clothing Hoptional, a limited edition “wet hop” beer. Not only are these hops picked fresh just hours before being added to the brew, they’re found growing wild in the protected open spaces in and around this mountain town. The culmination of a summer of “Hops Hunters” hikes, harvest day brings the community together for an aromatic experience and a chance to be part of a local creation. 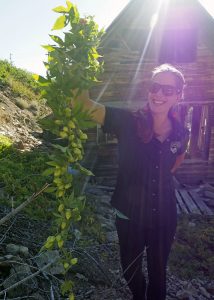 Beginning in June, Summit Land Conservancy takes groups of participants out on hikes to hunt for bines (not vines) of wild hops growing on lands protected by the Conservancy. This educational nature walk teaches about how miners from Germany and England brought hop plants to the area where they have thrived ever since. All summer, hikers monitor the progress of their growth and take note of locations, many of which are old mining ruins. This summer was a hot one with very little rain, and there was worry that the crop of wild hops wouldn’t come through. But, hops are tenacious plants and before long, the cones grew plump and ready for harvesting. 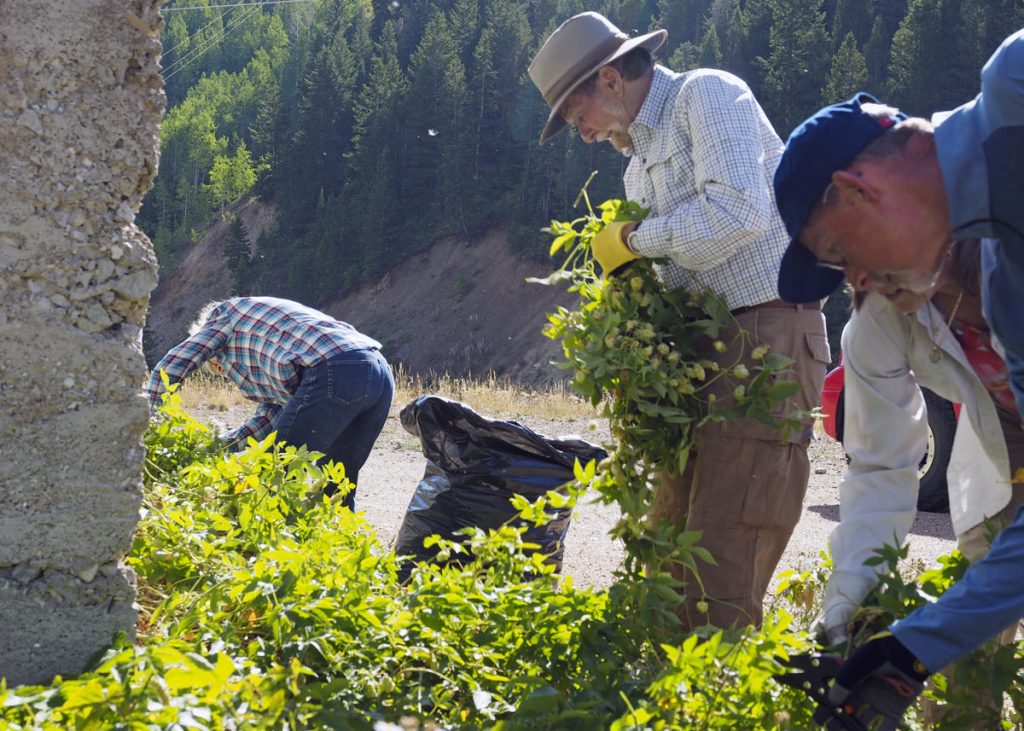 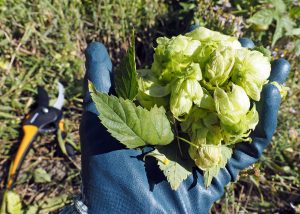 On the last day of August, volunteers gathered at Wasatch Brewery in Park City ready to hunt and harvest hops. The group split up to cover multiple crops at Empire Canyon, Virginia Mining Claims, and Bill White Farms. We were encouraged to wear good shoes, pants, long-sleeved shirts, and gloves to protect ourselves from the prickly hairs that adorn the bines and allow them to ascend whatever they can to get to sunlight. I joined the expedition to Empire where our fearless leader, Julia, explained how to pull the bines from what was typically a tangled mess of plants – hops and other vegetation they wrap themselves around – and cut them, leaving just a small amount behind to regrow next year. 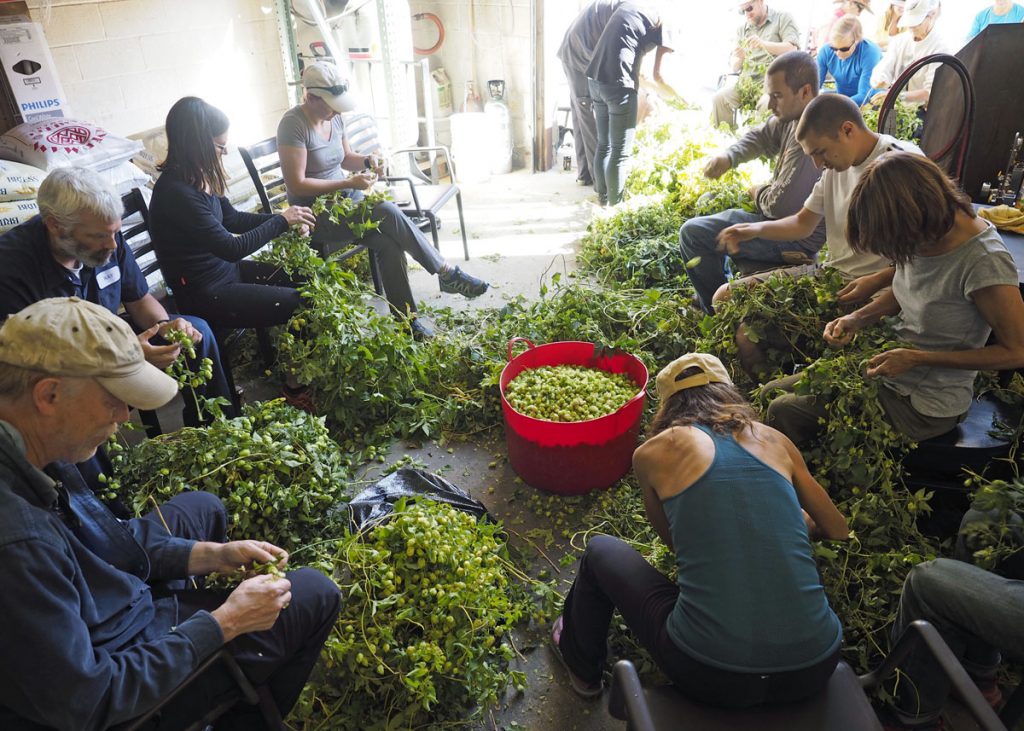 We filled several garbage bags full of hop plants and loaded them into the back of the truck for transport back to the brewery. Once we’d reconvened at Wasatch, the real party started. We all gathered round various receptacles, with mountains of hops piled around us, and began the long process of picking cones from the bines. It’s a tedious job, but as we worked, we chatted and communed with each other, reveling in the absolute divine aroma that permeated our workspace. Meanwhile, the brewers started making the beer we were there to be a part of. 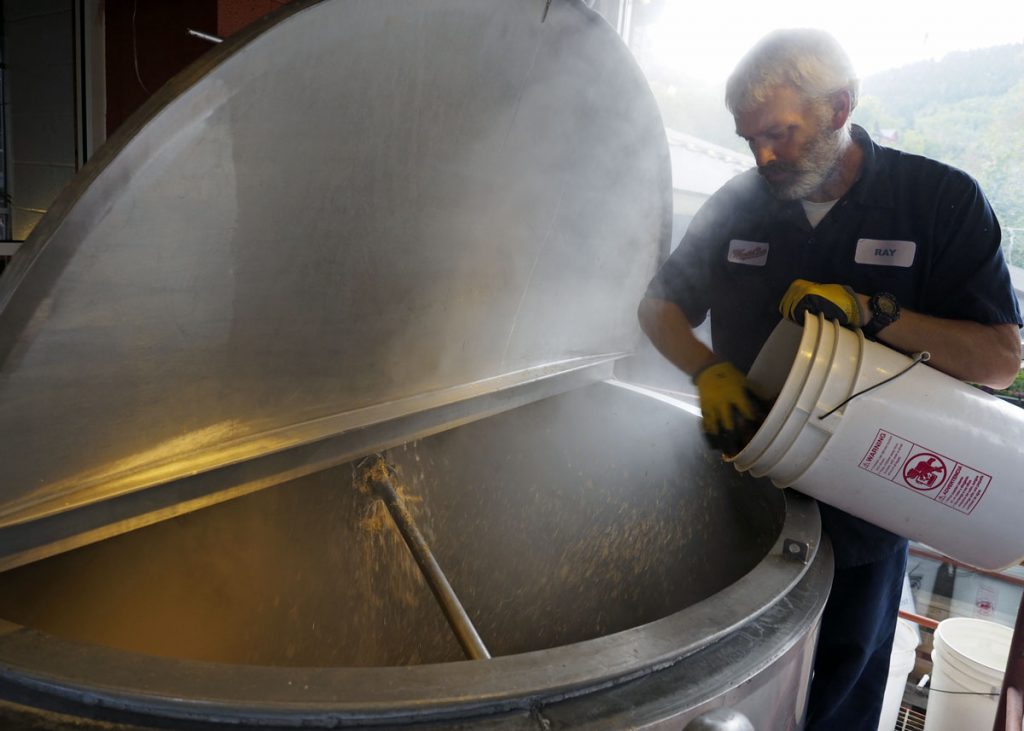 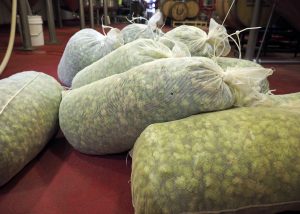 When Nils Imboden, head brewer at Wasatch Brewery, and his trusty assistant, Ray Madson, had decided we were far enough along in our cone picking, they began the mash for Clothing Hoptional. This year grain from Solstice Malt in Salt Lake City was used to make this a truly local brew. While the malt was mashing, we busy bees were finally able to break for lunch in the pub – food provided by Wasatch as a thank you for our labors. After lunch, a devoted few stayed to continue the work. As we filled the buckets with hop cones, they were periodically collected, weighed, and bagged for their trip to the brew kettle. Each mesh sack of hops would serve as a kind of tea-bag, imparting the essence of its contents into the brew. All in all we picked 110 lbs. of hop cones to be used in 600 gallons of beer. 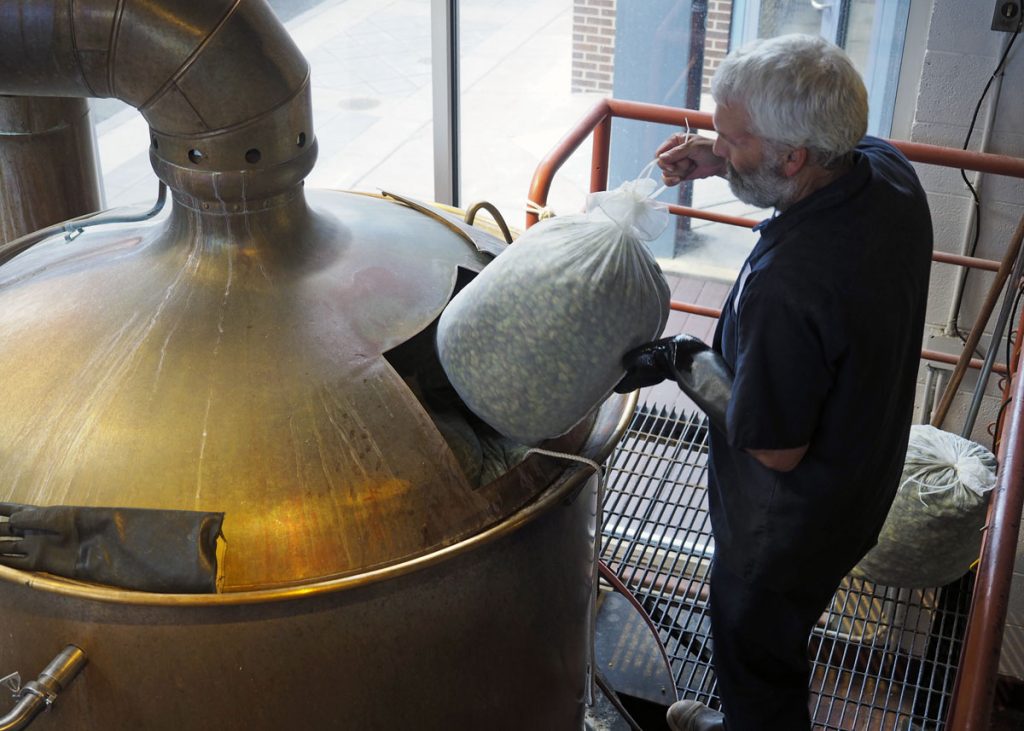 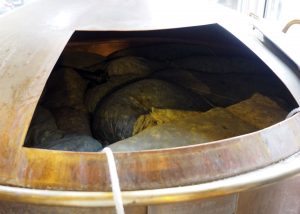 With about 15 minutes left in the boil, the bags of fresh hops were added to the kettle. It was no small task to fit them all in and get them submerged in the liquid. In the end they made a large flotilla that covered the entire surface of the simmering wort. I didn’t stick around to see them all hauled back out when the boil was finished. For me, it was the end of a long day and I was feeling a little intoxicated by the smells of bubbling grains and sticky hop cones. All that remained was to wait a few weeks for the beer to be finished and ready to drink.

That wait is over! On September 29th, the brand new Clothing Hoptional will be released to the public at the Hoppy Hour celebration, a party benefiting Summit Land Conservancy. Buy your tickets in advance for $15 and receive appetizers, drinks, and be entered in a drawing to win prizes. The Crafty Beer Girls will be there to toast a job well done by all of the Hops Hunters volunteers that participated in the harvest, the Conservancy, who are the guardians of wild hops in Park City, and the brewers at Wasatch Brewery, who ushered those hops from their bines to our delicious beer-filled steins. Bottoms up! 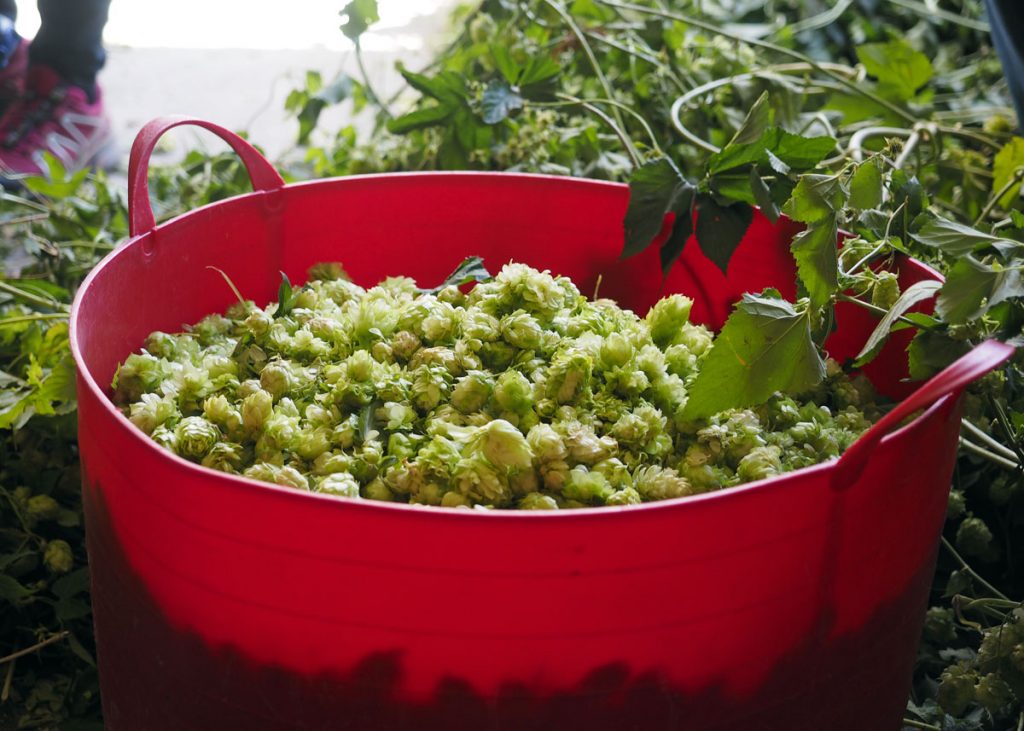 Check out our Facebook Page for a photo gallery.

For more on wild hops, read Lauren’s post about Alley Hops, and be sure to read about her recent adventure to collect wet hops from Idaho in, Get ’em While They’re Wet!