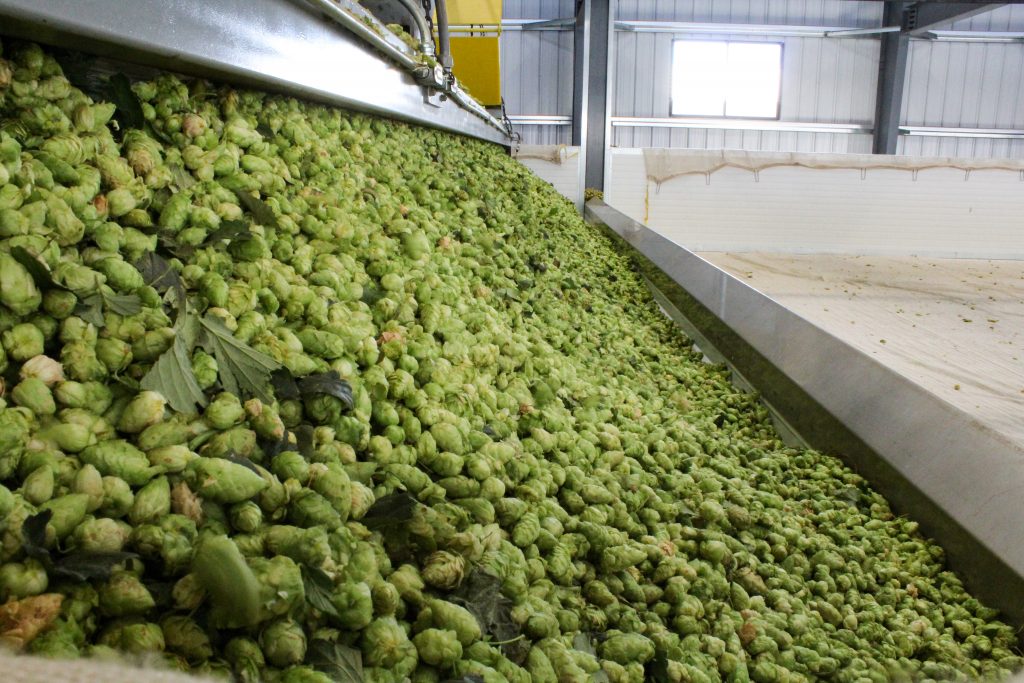 The majority of hops used in the brewing industry are pelletized, meaning the hops have been processed and squished down into little, green, rabbit-food-lookin pellets. This compressed version of hops is much easier to store and use than hops in their natural whole cone form. But who said easier was better? One season a year, brewers are able to trade ease of use for the unique and often epiphanous character wet hops can provide to beer. And that season is now!

If you’re wondering what all the “wet” is about, you can brush up on your fresh hop know-how by reading our previous post Wet Hop Beer: The Real Harvest Brew. In short, using wet hops (freshly harvested and unprocessed) in beer is like using fresh garden herbs in cooking – you can’t beat it! Dried herbs or pellet hops are fine to cook or brew with, but the only way to take advantage of the nuances of freshness is to Get em’ While They’re Wet!

Getting enough wet hops for a 10-barrel (310 gallon) batch of beer isn’t always as easy as plucking them from your backyard, especially when they’re a proprietary hop called Citra. Instead, Patrick Bourque and I (Lauren Lerch) of SaltFire Brewing Company in Salt Lake City hopped into a 16-passenger van and cruised up to Parma, Idaho, to snag some green gold from our friends at Alpha Hop Sales. It was my first time experiencing a hop farm in full production, and it was truly a brewer’s dream. I think I’ll be sneezing lupulin (yellow, resinous hop powder) out of my nose for at least another month! 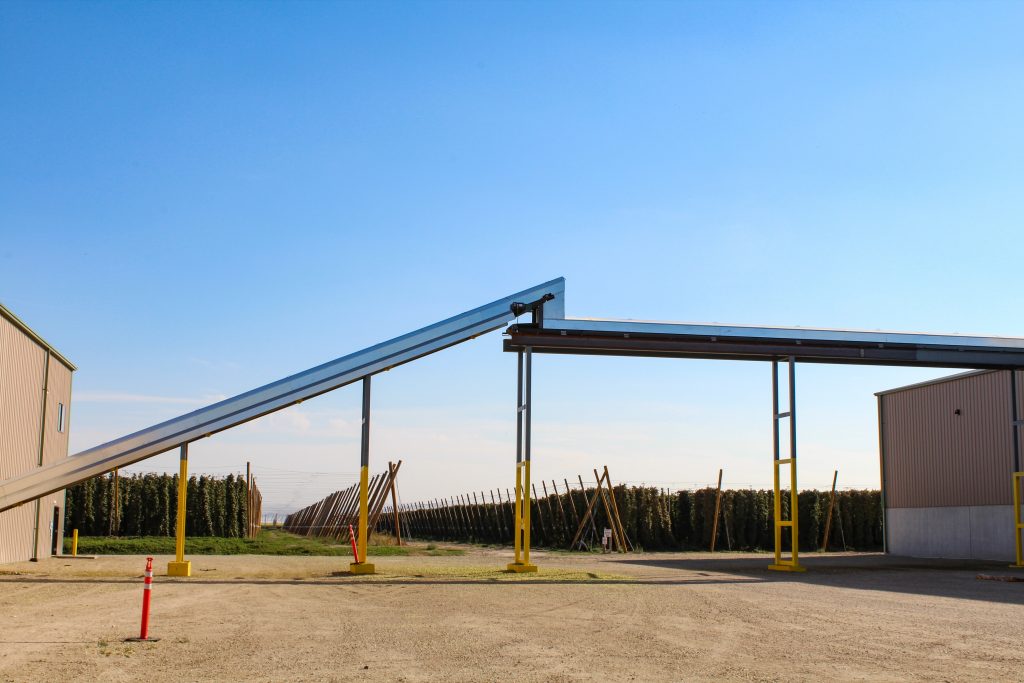 The farm was abuzz with trucks of hop bines zipping to and fro, accompanied by the beep of forklifts and drone of hundreds of feet of conveyor belts. Perhaps the most striking aspect of the environment was the smell. The zesty, pungent blast of hop aroma was an unyielding part of our short tour of the facility. If the thick aromas weren’t enough to permeate my skin, then jumping into the hop kiln to retrieve the wet hops certainly was! We scooped and shoved wet hops into big bags with our hands until we reached our desired weight: 50lbs for SaltFire, and another 180lbs between Fisher Brewing and Desert Edge Brewing. 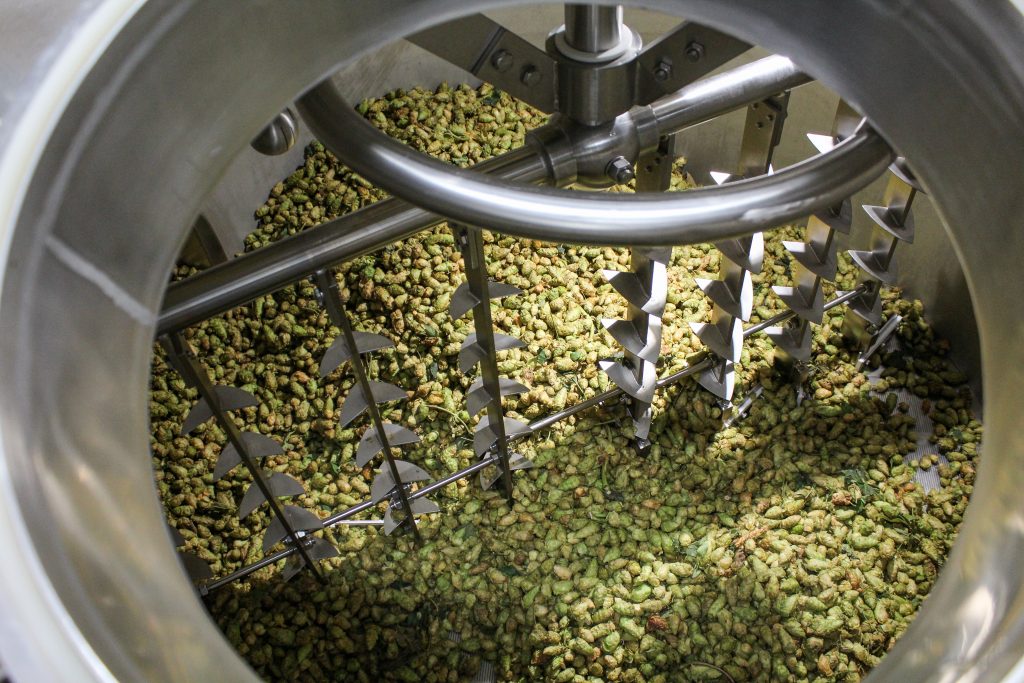 Saving hops from the kiln felt like saving animals from the zoo. For some reason, it felt both liberating and devious. These babies were meant for a bigger life than pellets, refrigerators, and online hop markets! They were meant for… THE MASH TUN! That’s right, friends. We decided not to bag and boil these delicate flowers, but to steep them in the mash tun (where the milled grain and hot water rests earlier in the brew process). With its perforated bottom and ease of use, the mash tun provided the ideal vessel for both treatment of the hops, and maximum wort yield (wort is sweet, unfermented beer). At the end of the boil, the wort was transferred to the mash tun, where the wet hops were patiently waiting for their wort bath. We gently punched the floating hops down with a mash rake while they gave up their lupulin ghosts for the greater good. The marrying of malt and hop aromas in my nose has long been one of the most exciting parts of brewing for me, and this experience was no different. The collective drag of a five hour drive immediately followed by an eight hour work day all while being relentlessly hung over slowly melted away as I stood over the mash tun full of hops and wort. Life was good.

Before I knew it, the brew was happily bubbling away in the fermentor, and my tired head hit the pillow like a bale of hops. It will be a short wait before this wet hop creation is ushered into its final form for our drinking pleasure. Keep your eyes peeled for the SaltFire Lupulin Dew release, as well as the release of its sister beers at Fisher Brewing and Desert Edge Brewing, all of which were made with wet Citra hops. 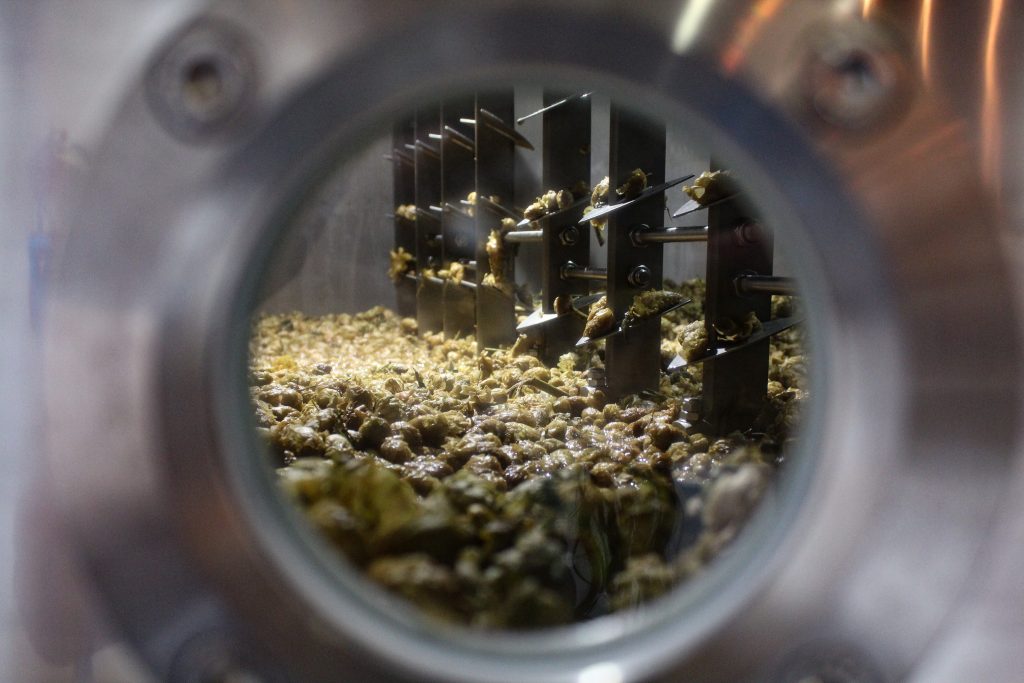 Not in Salt Lake City? Chances are, a brewery near you has a wet hop beer in the works. Ask around, because they’re definitely worth seeking out! 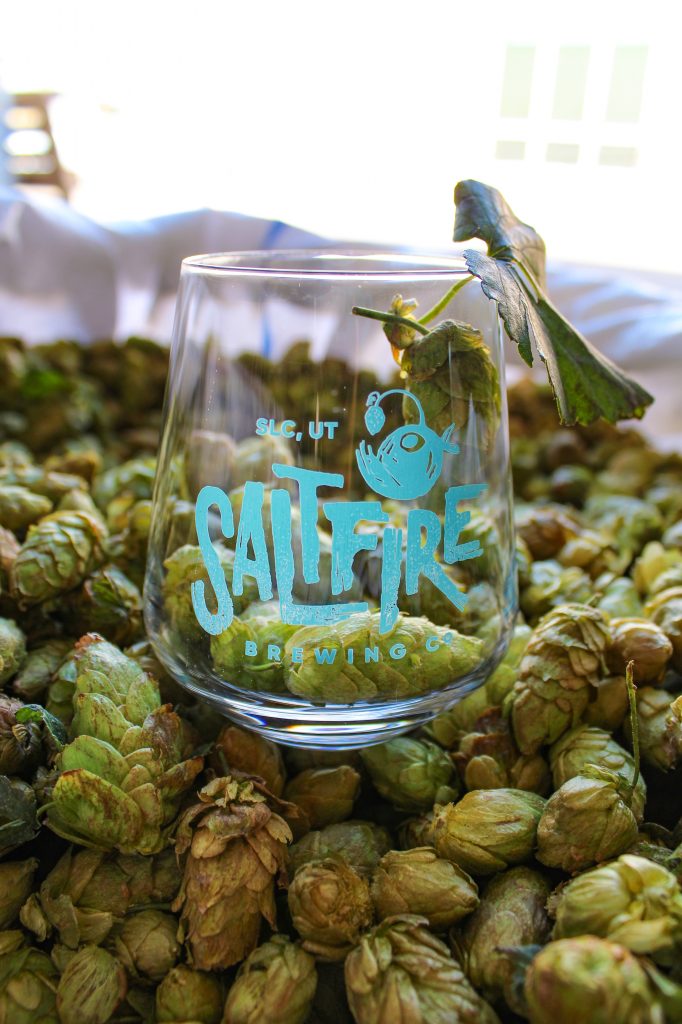