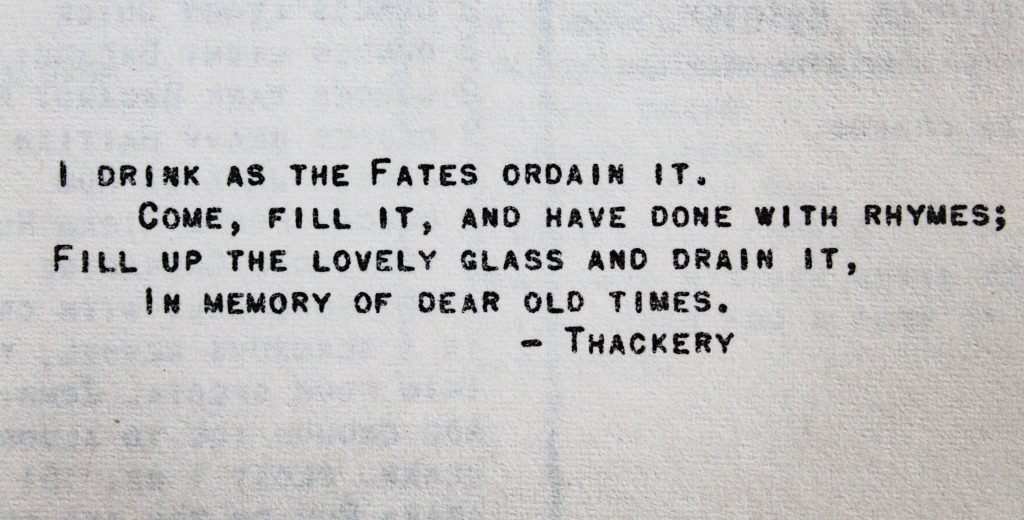 It was 1941. The world was at war for the second time in the 20th century, and the ripples of the 13-year-long Prohibition of alcohol in the United States (1920-1933) was still being felt as strongly as the moonshine that made its way into hip flasks during the ban. Despite the rough political climate (or perhaps because of it), the people in 1941 were consuming copious amounts of legal alcohol, and apparently those people needed a book to show them how to do it. 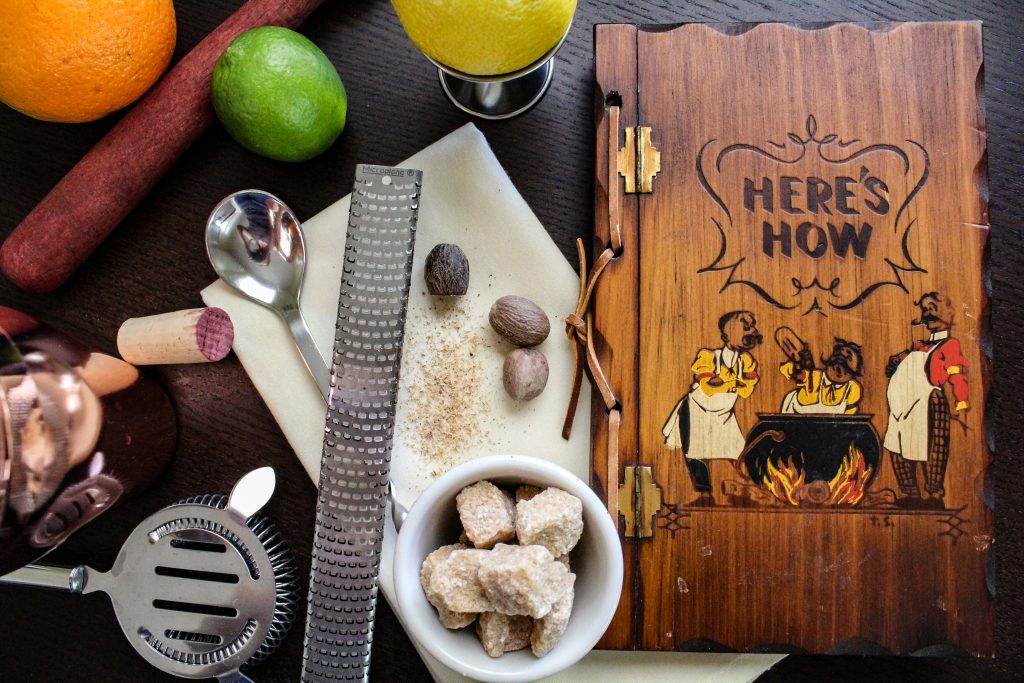 My good friends from New Jersey had inherited a wealth of alcohol related items from a relative, and among them was an old book they thought might tickle my fancy. I am tickled, and fascinated, and borderline giddy about it! 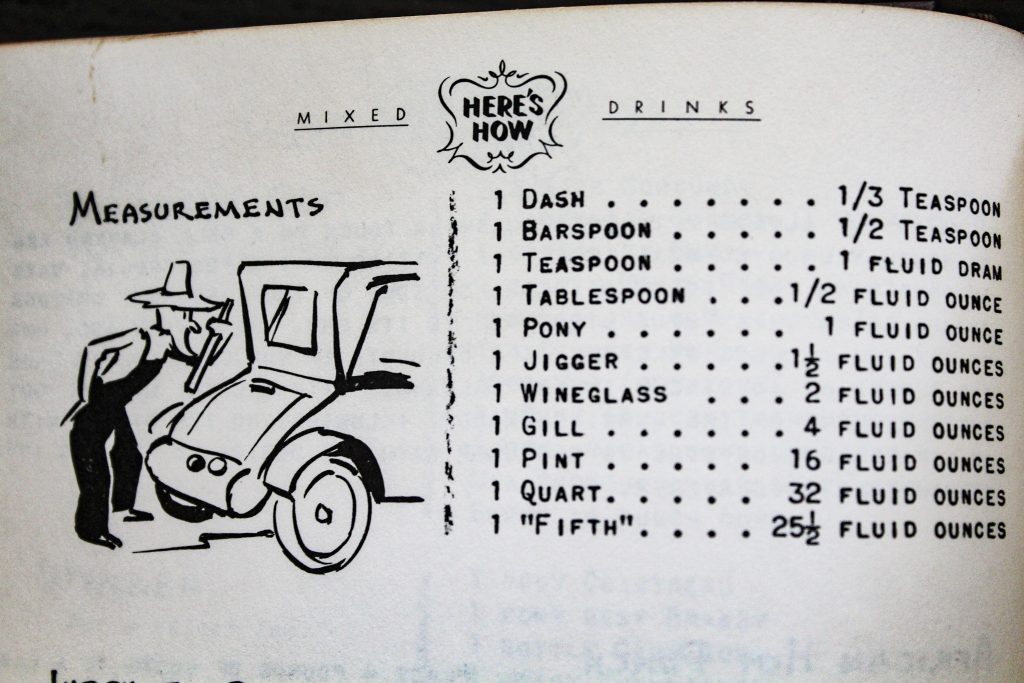 Here’s How is a 76 page instructional guide to enchanting and intoxicating house guests with booze – 1940s style. From what I can gather, 1940s style means extra stiff drinks that may or may not be served with raw egg, and are most often dubbed with time-appropriate names that tend to be lost on this 90s child. Cocktails like “Admiral Schley Highball”, “Scarlett O’Hara”, and “Huckle-My-Butt” are followed by quaintly vague instructions on weathered pages that are half illustration and half typewriter font. A jigger of this and a pony of that with a lump and a dash is enough to send you in the direction of flavortown. I just hope you have a guest room.

The main draw of this book, at least in this day and age, is its old-timey charm, rivaling that of your grandfather. This book has whatever made your Grammie blush when you asked about how she and Poppie met. Yes. It’s got game. Well kept and always purposeful, Here’s How sports a balance of function and fashion only your hipster bartender boyfriend could dream of. How else could a raw egg in your beer sound moderately appetizing? 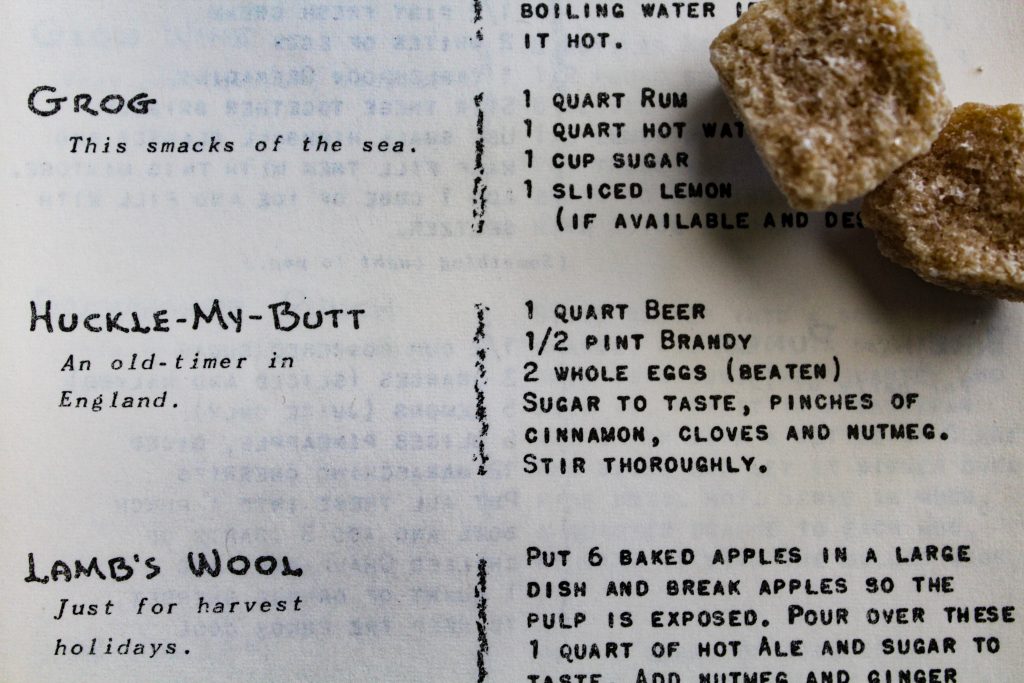 The pages of Here’s How are sandwiched between two stylized wooden boards bound at the spine by a single, thick leather string that makes me think I might have a chance of making a book out of woodland scraps should humanity ever go to sh*t. The only thing I’d have trouble recreating are the two bronze hinges on the face board that allow you easy access to the book’s contents. It’s a literal door to knowledge.

Beyond the cheeky illustrations and short essay introductions to each new section, the sayings, quotes, and side remarks on each page are the buttercream icing to my vanilla cupcake – the sultry sunset to my workday’s end – the surprise crunchwrap supreme on a tipply night. They make me giggle and/or ponder what the hell they could have possibly meant 77 years ago. The bafflement is enough to give me rosy cheeks pre-cocktail consumption.

And so, in search of enlightenment and intemperance, I decided to place myself on the post side of a cocktail or two… or four.

As per Here’s How: 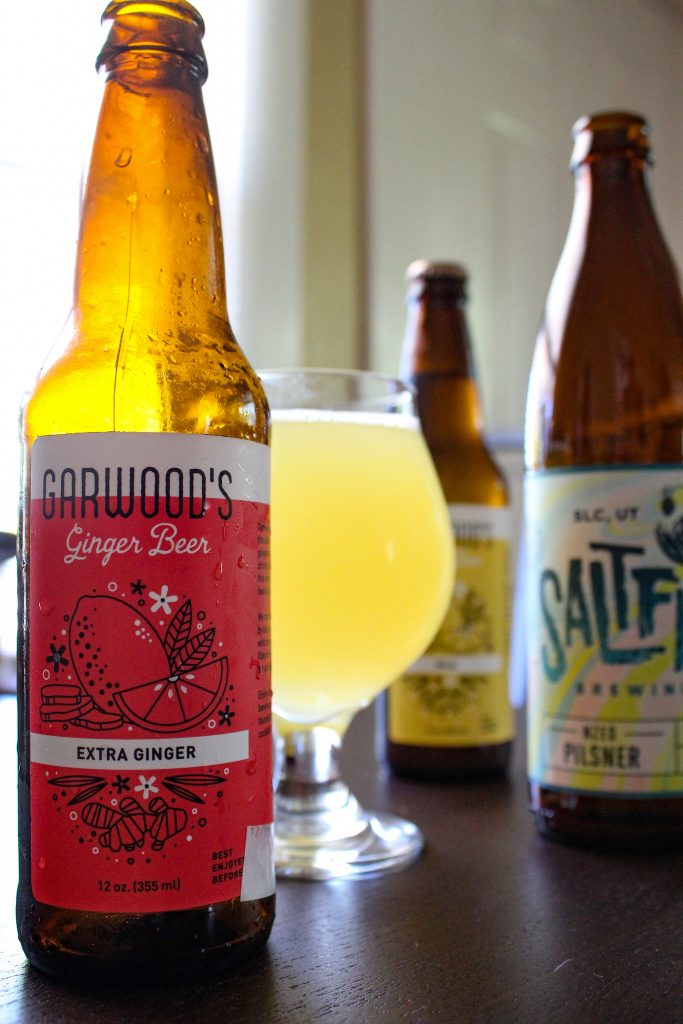 Simple, spicy, and somewhat familiar to the 21st century is this half beer half ginger ale concoction. Unlike the majority of other cocktail options in Here’s How, this one probably won’t put you on your ass if you have it with lunch. Considering the book was written about 50 years before the start of the craft beer revolution, I’m guessing beer options were limited enough in style that “½ glass beer” was a sufficient ingredient descriptor. Pilsner seemed like an appropriate guess, as did using whatever was on hand to make the cocktail work. In that spirit, I used SaltFire Brewing NZED Pilsner and Garwood’s Ginger Beer.

I now understand why the recipe calls for “ginger ale” and not ginger beer. At equal parts, the ginger from Garwood’s “Extra Spicy” ginger beer dominated almost all notes in the beer except for hop bitterness. I suspect either using less of the “Extra Spicy” or the same volume of Garwood’s “Mild” option would produce a better balance. Regardless, the mix was refreshing, and something I’ll try again until I get it just right! 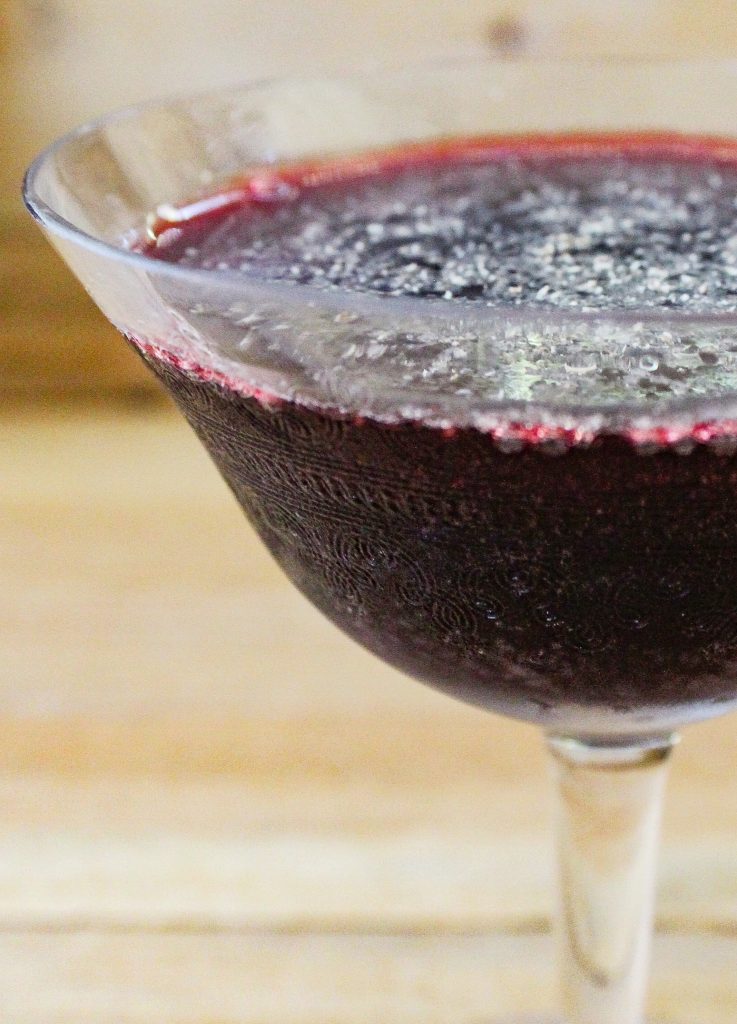 Ok, we’re done with lunch cocktails and onto a double serving of port wine (~20% ABV). The standard bar measurement for a “wineglass” is 4 ounces, the standard serving size for port is 3 ounces, and this recipe calls for 1½ wineglasses. You do the math. Grandma knew what she was doing, at least until her third Port Sangaree.

…or maybe Grandma was losing her mind, because Port Sangaree is not very good. The ice muted the jammy, red fruit notes, and the nutmeg was a lifesaver tossed too short of the sinking ship that was this cocktail. Sorry Grammers, but I ended dumping this one into my half glass of Shandy Gaff, and the desperate effort to salvage some red wine ended up tasting better than your already sweet, cold port with nutmeg. It’s no wonder this one didn’t make it onto 21st century cocktail lists. 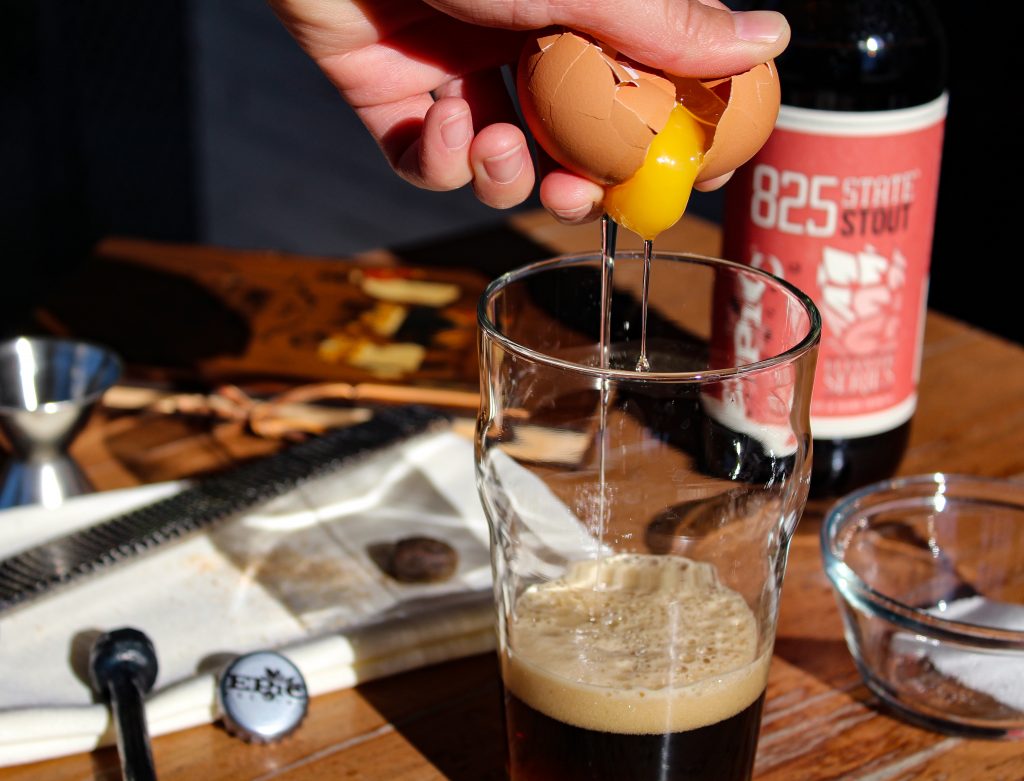 “Pour ale into regular ale glass to near the top, add 1 teaspoon sugar and break in 1 egg. Stir well and sprinkle with nutmeg.”

Yep. I’m doing it. I’m going to break a raw egg into my beer, and then I’m going to drink it. But I’m not doing it without adding an extra ingredient. DER BIERSTACHEL! Remember when I had that hot poker forged for the purpose of firing it up and plunging it into beer? If you think I’d considering making an ale flip without it, you’re as loopy as Grandma. 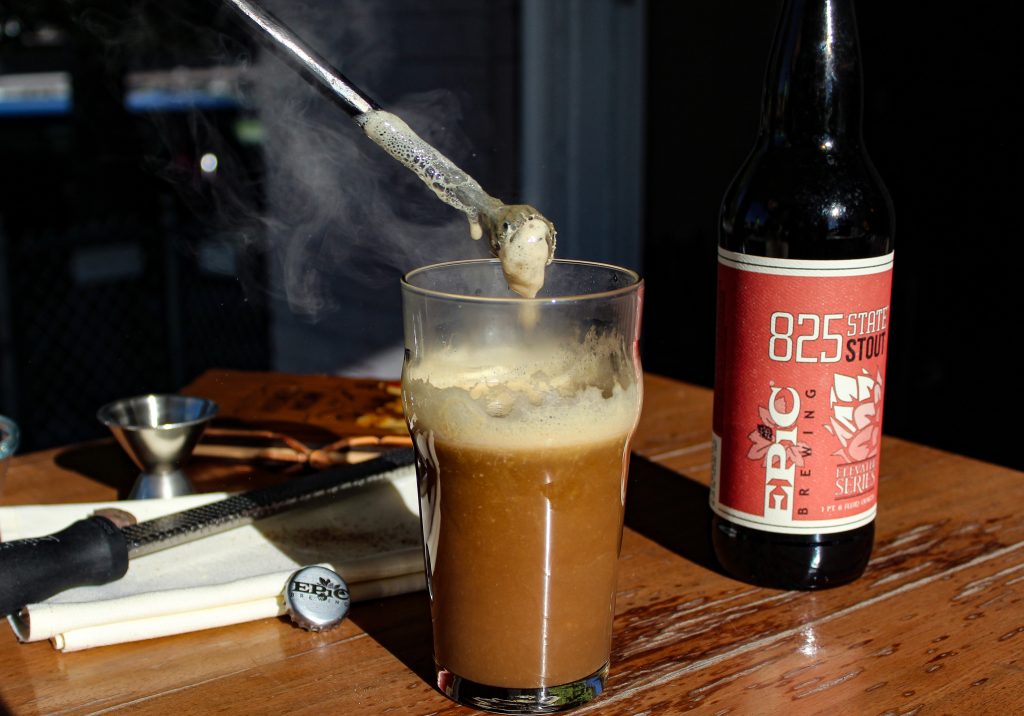 I did things a bit differently than the recipe called for in order to accommodate the bierstachel. I only filled the glass one third of the way with beer before adding the egg and sugar. The bierstachel works best when the majority of CO2 is still in suspension, and I knew beating up the egg would cause a fair amount to come out. After topping up with more beer and giving a gentle stir, I lit up the bierstachel until it was hot enough to momentarily scorch the beer. The result was an aroma of fresh waffle batter with chocolate chips. As appetizing as it sounds, I couldn’t stomach more than holding a sip in my mouth for as long as it took me to run to the sink. 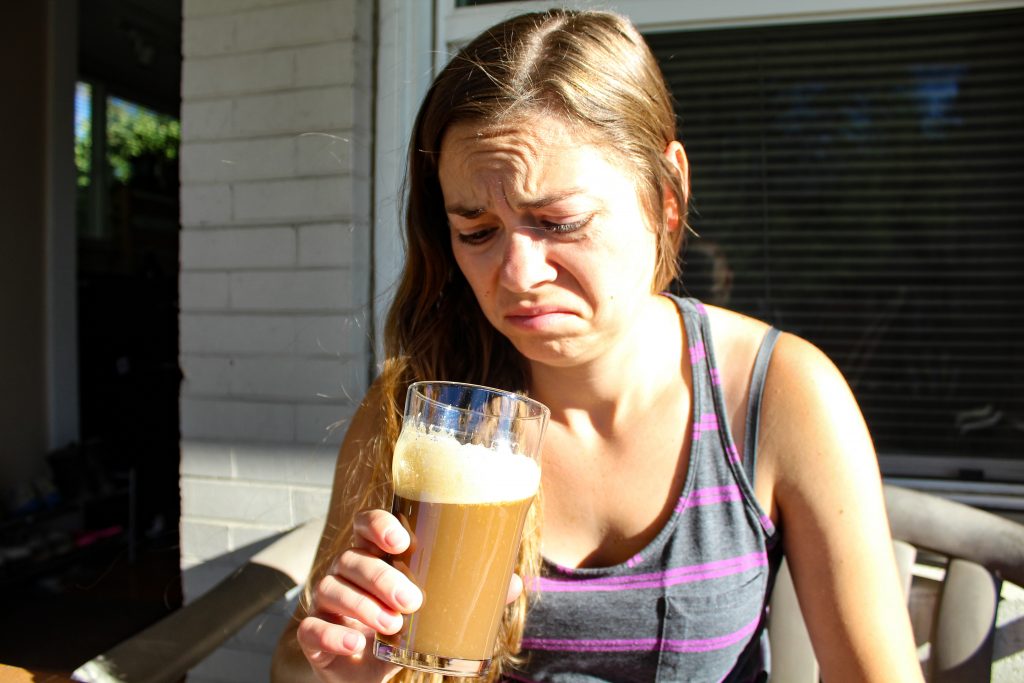 This one is a big, fat nope for me. There’s something about raw eggs, specifically runny whites, that makes my brain curdle like spoiled milk. I thought I could do it, you know, for science. I was wrong. Eggnog is fine. An ale flip is not. Though, I’m sure it’s delicious for those with zero fear of salmonella.

The cocktails themselves may not have enthralled me, but the book sure still does. Weed out the wacky options from any cocktail book from any decade, and you’re destined to land in unfamiliar territory that can send you running to the kitchen sink or running to the liquor store for more ingredients. A slew of cocktails in Here’s How are modern day bar menu standards. It seems the recipes that haven’t survived into the present world of cocktail-dom have probably died off for a reason. Digging up their bones for another go ‘round wasn’t necessarily a mistake, but rather a lesson in what works and what doesn’t.

Therein lies the beauty of an old, endearing book. 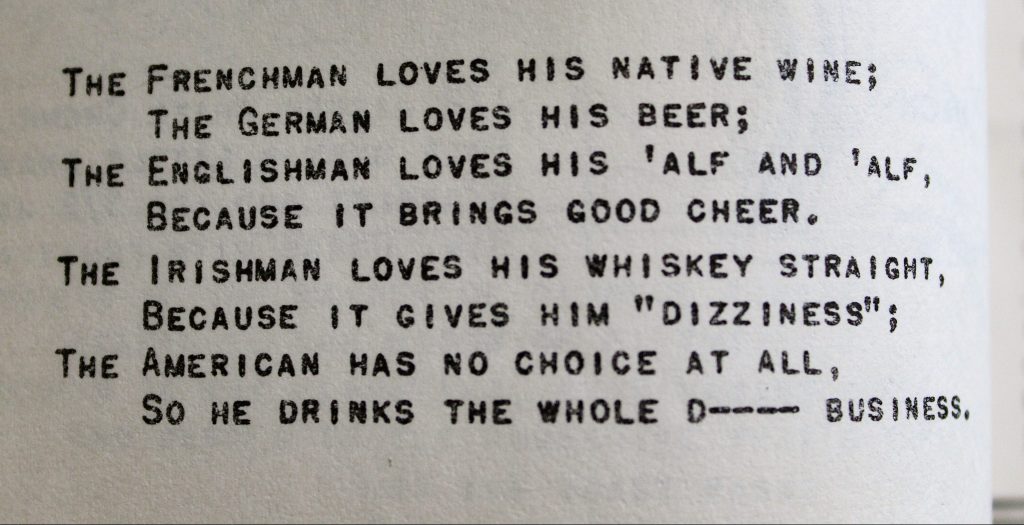 Thank you, Jesse and Becky, for this lovely gift.