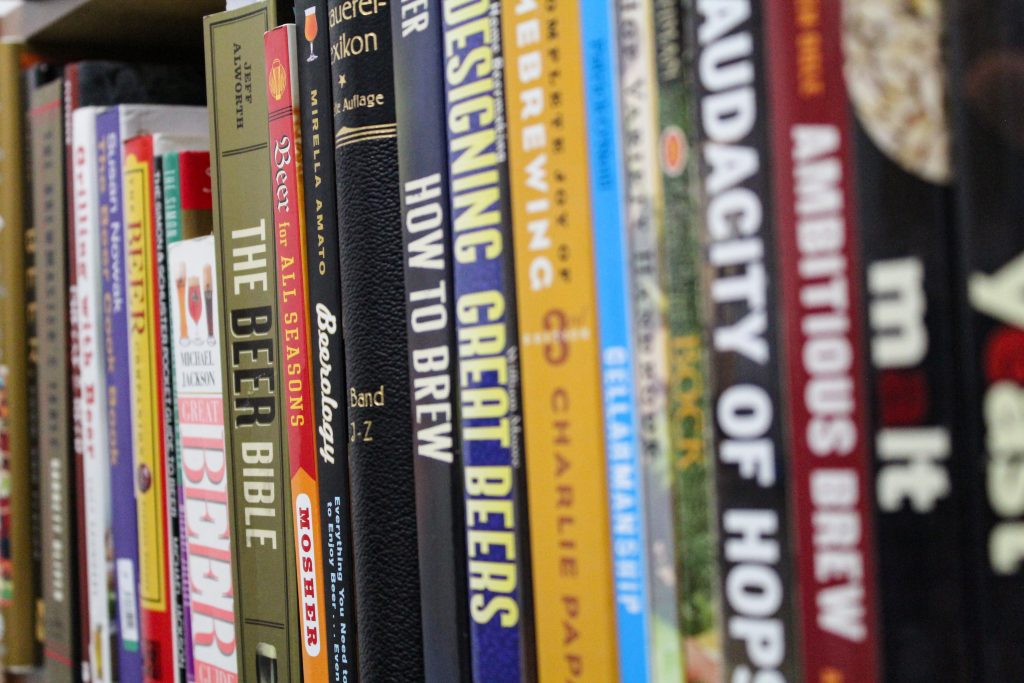 Over a year has passed since I first admitted my beer book addiction to the world. Much has changed since then, but my unyielding urge to snatch bargain beer books from thrift store and virtual shelves has remained much the same. Entering my 30s, traveling to Germany, and changing my place of employment have had me living and thinking differently. Amidst the change, I find the unchanging details of my life rather comforting, like the beer books patiently waiting to be cracked, bookmarked, dog eared, and smothered with highlighter fluid. They will always be there, and the only aspect that will change is how many of them I’ve managed to hoard. But therein lies the thing – books are for reading, not for hoarding. At least, that’s what I tell myself so that I feel a short pang of guilt each time I burden the bookshelf with another book I won’t touch for maybe ever. I believe it must be a form of masochism, but I digress.

Perhaps contrary to popular belief, I’ve actually managed to use several of my hoarded, precious pagey-things for their intended purpose – to be read! Each time I point my eyes and highlighter in the direction of their words, I’m filled with satisfaction, curiosity, and beer knowledge (…and actual beer, because you can’t not). The following selections have stood out to me over the past few hundred moons as pieces of work that deserve to be more than one of the many books that serve as a decoration on your shelf. They deserve your attention, and more so, your discussion. 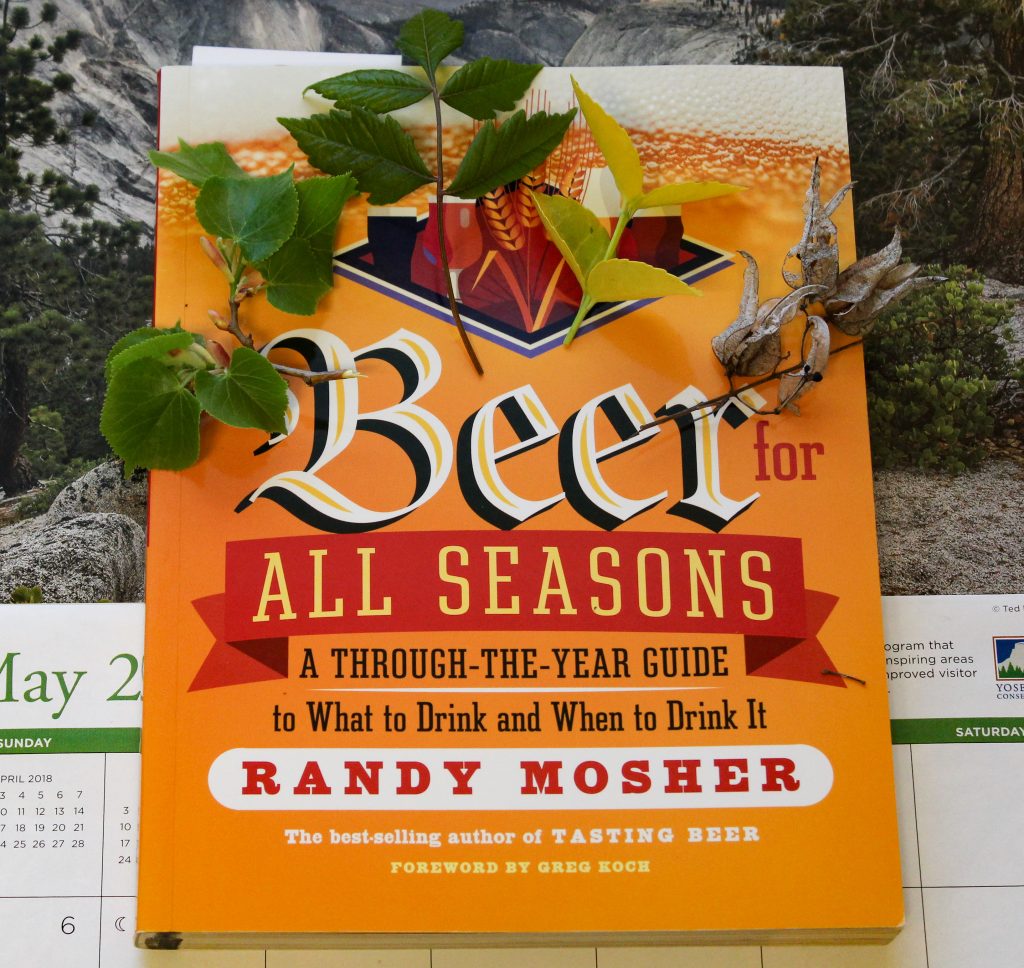 Beer for All Seasons: A Through-the-Year Guide to What to Drink and When to Drink It – Randy Mosher

“Every season has its beers, and drinking seasonally helps us stay in touch with the ebb and flow of life and connects us to those who came before us who had similar desires for something refreshing, warming, profound, bracing, or whatever is our heart’s desire.”

Beer for All Seasons is a lighthearted reference book that belongs somewhere in between the coffee table and the bookshelf. Mosher has a knack for including eye-catching photos and colored themes in his books that give them the flair of a coffee table book, with content that is equally enticing. The allure of this book is not in the knowledge it offers, but in the way the knowledge is organized.

The first two chapters are a sort of abridged version of Mosher’s Tasting Beer. They give the reader just enough history and tips for beer evaluation to follow and appreciate the remaining chapters. Seasoned beer enthusiasts may not learn much here, but I have been surprised by the occasional diamond in the ruff of the redundant-but-necessary beer 101 introductions. Or, you can simply skip ahead to the chapters that break down the year by seasons and months, filling your brain with excuses to celebrate the singular topic of almost every book I own. Each season chapter contains beer suggestions, traditions, holidays, history, and festival listings to insure you’re drinking the right beer, in the right place, at the right time. I’ve often used it to spark ideas for a blog post, or even as a visual aid for a presentation. 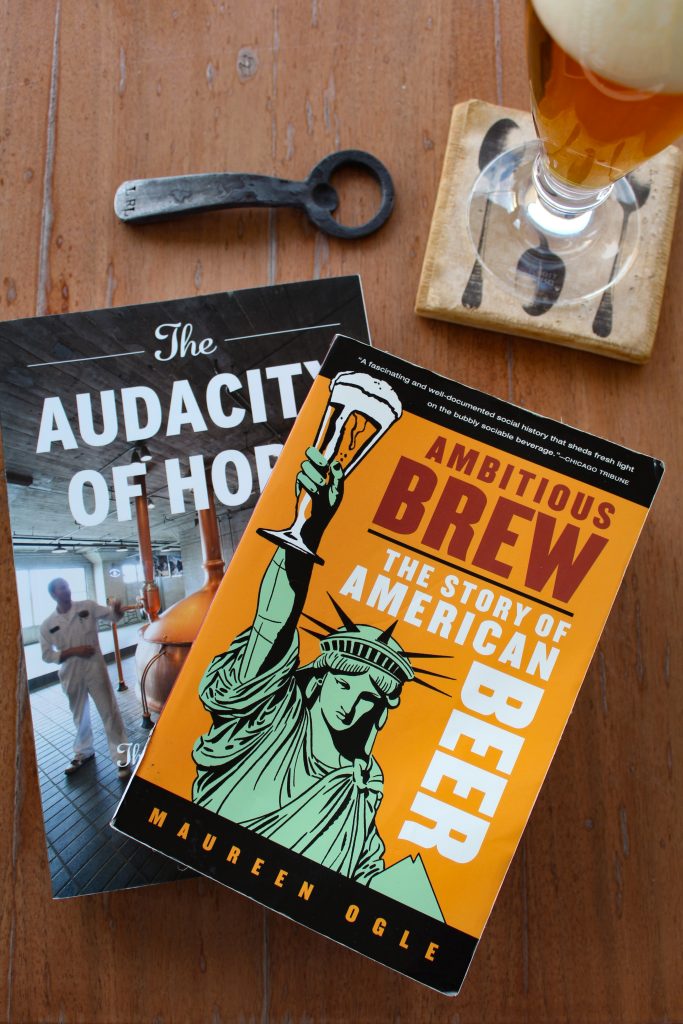 “Beer aficionados today scorn lagers made with corn or rice as inferior to all-malt-products, believing that brewers adopted the use of other grains only to save money. That was not true: It cost Adolphus Busch more to make his adjunct-based beers than his all-malt brews, and those lagers sold for higher prices than did their conventional Bavarian-style counterparts.”

When I picked this book up, the only thing I knew about it was that it was on the list for the Pink Boots Society Book Club. After I was a few pages in, I couldn’t help but notice the similarities it shared with Tom Acitelli’s The Audacity of Hops. Both books seek to unearth the historical details of beer in America. However, Ogle’s book is not limited to the history of craft beer. I know what you’re thinking, and I hope I can convince you to drop your nose from its altitude, back down to earth, and into this book for a long, thorough history of what we now know as “big beer”. Before the Fritz Maytags and Ken Grossmans of the latter part of the 1900s began to revolutionize beer, the Frederick Millers, Adolphus Buschs and Frederick Pabsts of 100 years earlier were breaking in the young nation’s taste buds and attitudes toward the frothy beverage. It’s one thing to be aware of the current polarization of the beer industry, and another to truly understand it.

I highly suggest reading Ambitious Brew, followed by The Audacity of Hops. The final couple of chapters in Ogle’s book overlaps in subject with the first few chapters in Acitelli’s, which will allow you to take a break between reading each book, if you wish. Open your craft beer loyal mind just a little bit to Ambitious Brew, and it will be blown wide open by the facts within. I was skeptical that a history retold with such detail could be relatively accurate, but the twenty-three page bibliography squashed my doubts faster than a boot on an empty can. This book might just help you shake off some bias and show a touch of respect for these industry pioneers. 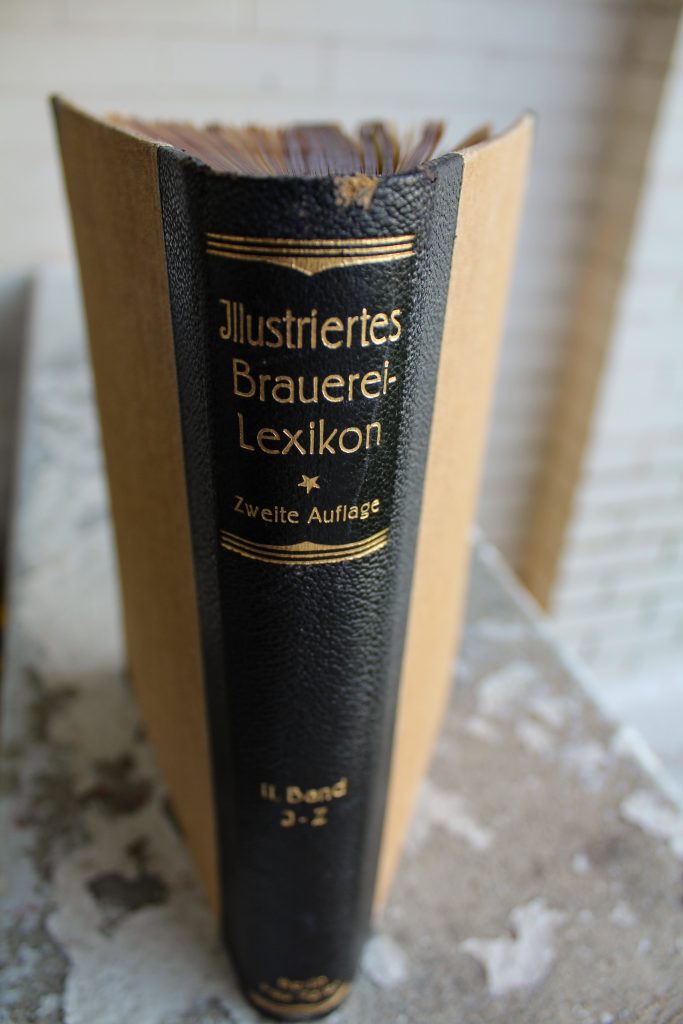 If you find the book title confusing, that’s because it’s not written in the English language. You know I can’t resist including something about Germany in my blog posts, so here’s your bi-weekly dose. I first encountered this German beer encyclopedia in Kloster Mallersdorf while chatting with Sister Doris, long-term brewer at the abbey. (You may recall my story about her in a previous post.) One of my tour-mates had noticed the 100+ year old book, and asked if we could page through it. We took turns ogling and smelling the pages that thoroughly detailed all things beer in a language only one or two of us were fluent enough to understand. Nonetheless, I was captivated. Upon returning to the states, I had the itch to find and buy a copy of my own. I dropped a college textbook amount of money on a second hand book from Germany through a website that I had never used, and crossed my fingers. To my surprise, the book arrived only a couple weeks later!

Well… half the book arrived. My ignorance and inability to properly translate German had allowed me to purchase a more recent (1925) edition of the Lexikon that had been split into two volumes. I had only bought the second half that listed everything you wanted to know about beer for keywords that started with the letters I through Z. I’m shit out of luck for looking up hops, but there’s still plenty to translate and learn. One of the most interesting features of the book are the notes left behind by its former owner. Small pieces of brown paper are wedged between pages throughout the book, posing questions or holding reference numbers that were important to someone once upon a time. My favorite is the one containing a sketch of what appears to be the planning of a coolship. I’m sure this book will continue to serve me for as long as google translate or its equivalent exists!

I conclude my yearly advertisement of beer literature by urging you to dust off a beer book and give it some old-fashioned reading love. Take notes, tell a friend, and revel in the greedy satisfaction of helping another book fulfill its purpose. It almost feels as good as the beer in your glass. 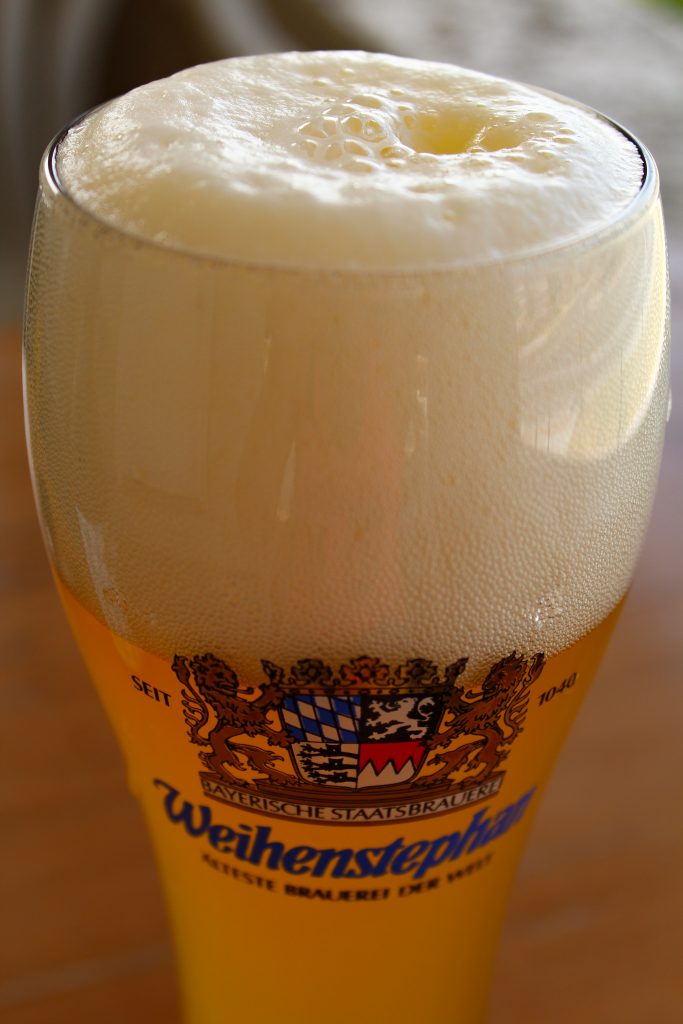