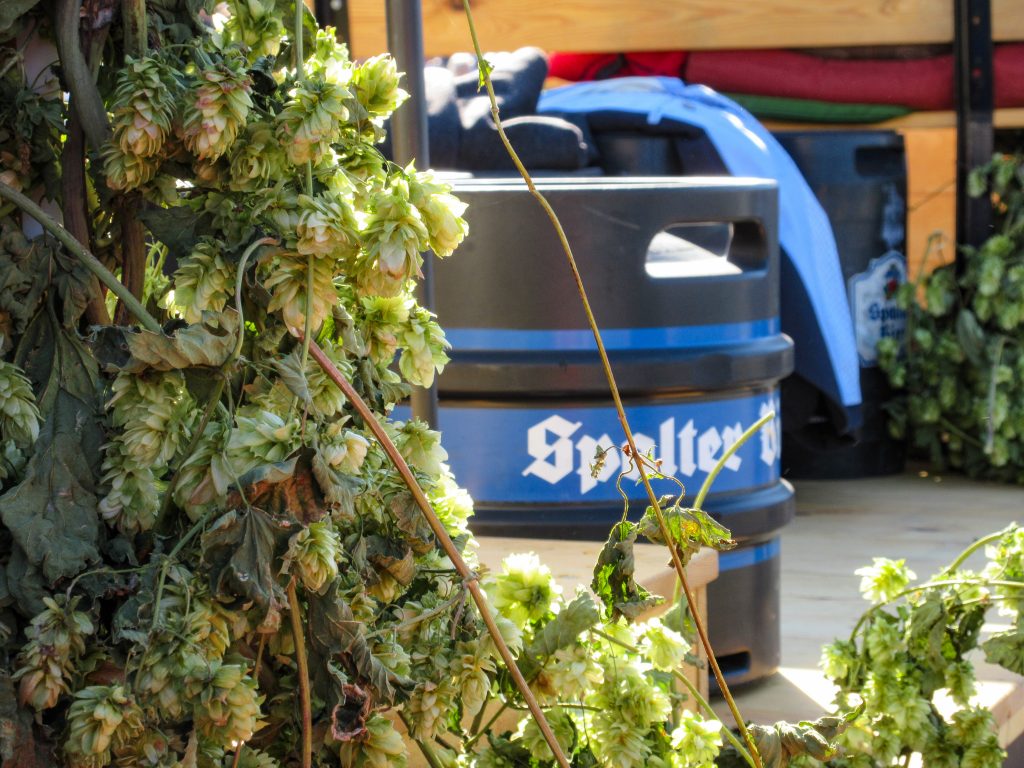 As they say in Spalt, Germany…

Roughly translated: The people in Spalt grow old because of the good beer, meaning they owe their good health and ability to age well to this nutritious beverage.

I wouldn’t expect anything less from a city nestled in German hops country where the 5,000+ citizens own the town brewery and hold an annual festival in celebration of the hops harvest. And as luck would have it, I found myself marching in a parade down the streets of Spalt on the very day of this hop gaiety. The slow-mo of jetlag and the lightspeed of life in an unfamiliar country somehow brought me to a state of disoriented wonder as I plodded down the cobblestone. It was as if I had been plucked from life as I knew it and carefully spliced into a hops wonderland full of dirndl and lederhosen-clad townspeople. My new Pink Boots sisters and I were soon skipping and dancing to the oom-pah of marching bands, and even made the obligatory schnapps stop along the parade route. This was just the beginning. 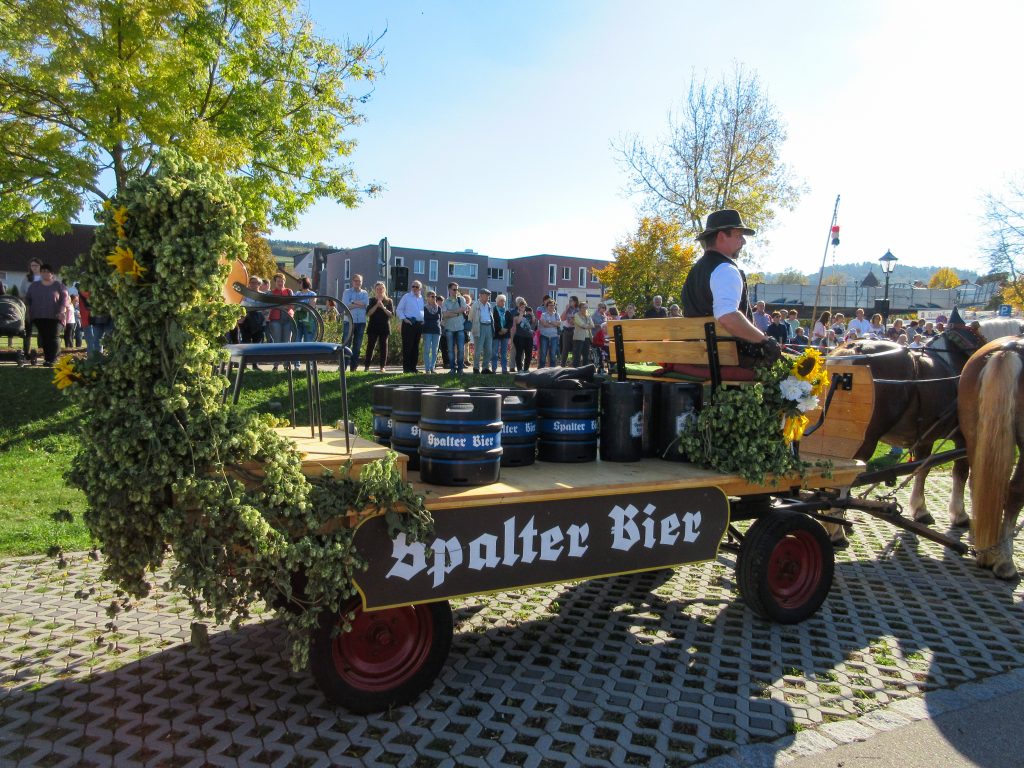 The Kirchweih, literally meaning “church dedication”, is a festival held annually in southern Germany to honor the patron saint of the local church. The festival is typified by plenty of music, games, food and beer, and in the case of Spalt, a parade in which casks of beer made from freshly harvested Spalter hops are delivered along the parade route to different pubs via horse drawn carriage. This march of hops culminates in a park on the outskirts of town where the participating groups are recognized, the fall version of a maypole is raised, and most importantly, Maßkrugs of Hopfen Zupfer Bier (fresh hop beer) are poured by the Bierkönigin (Beer Queen) and enjoyed by all.

The end of the parade marked the beginning of the next festivity. Carnival rides and beer tents were set up not too far from the towering Kirchweihbaum (church tree or fall maypole). Equally as close was the Kornhaus (grain hall), which holds the Hopfen Bier Gut, or hops museum. Earlier in the day, we had the opportunity to briefly explore the multi-level museum and ask questions about their “grün gold” (green gold = hops!). Even though I couldn’t read the plaques accompanying each exhibit, I was able to get the gist, and the whole experience was pretty damn cool. The bottom level of the museum held their gift shop, featuring all things Spalter. I loaded up on gear and trinkets, which included my new friend and Spalter mascot “Hopfi”. Is it a children’s backpack? Most certainly. Did I wear it the rest of the day anyway? Yes, indeed. 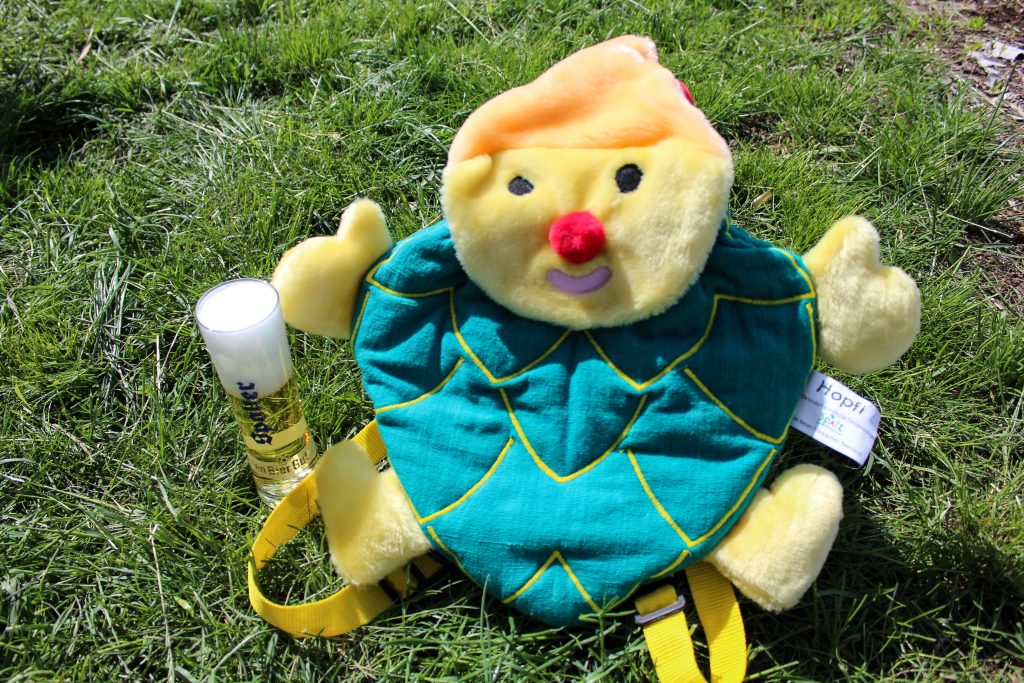 After enjoying a Hopfen Zupfer Bier or two and chatting with the locals, we were invited to tour the Spalter brewery. Master Brewer Günther Meyer and his daughter, Bierkönigin Elisa, showed us around the brewery and made us feel very welcome. The brewery has been in existence since about 1538, and was purchased by the town of Spalt in 1879. The citizens of the town are the owners of the brewery, and it is the last municipal brewery in all of Germany. As such, the brand loyalty the citizens show for this beer is unlike any other I’ve seen. Obtaining beer that is not brewed at Spalter in this area is quite difficult, because the demand is only for Spalter Bier. When asking Master Brewer Günther what he thinks of other beer and beer trends, his response was that they are not interested in other people’s beer. As far as they’re concerned, Spalter Bier is the only beer in the world! This idea was so novel to my American mind, but it made so much sense here. The connection between beer and community in Spalt is closer than green on hops.

The afternoon waned into evening, and though the sun had set and dinner was on the table, the night was not nearly over. The “Nacht des Bieres”, or Night of Beer, would soon be in full swing, and we would be rocking out to what I think was 80s German rock and roll bands. Spalt Mayor Udo Weingart had been our personal escort for the entire day, and he, too, was fully enjoying the show late into the night. He was the master of ceremonies for the parade, showed us around the town, and even had dinner with us! It wasn’t long before we had rocked ourselves into a state of sleepy satisfaction. We would soon be asleep in the castle (literally), resting up for the next day of amazing German beer culture.

I can’t think of a more perfect day for my first full day in Germany. Mayor Weingart explained the idea of Kirchweih is to “just be happy”. I couldn’t be anything but!

Vielen Dank to Mayor Udo Weingart, Master Brewer Günther Meyer, Bierkönigin Elisa Meyer, the staff of Stadtbrauerei Spalt and the Hopfen Bier Gut, and all the citizens of Spalt for welcoming us into your town and sharing your culture!

Big thanks to the Pink Boots Society and Treasures of Europe Tours for making the 2017 Germany Cultural Immersion Tour possible!