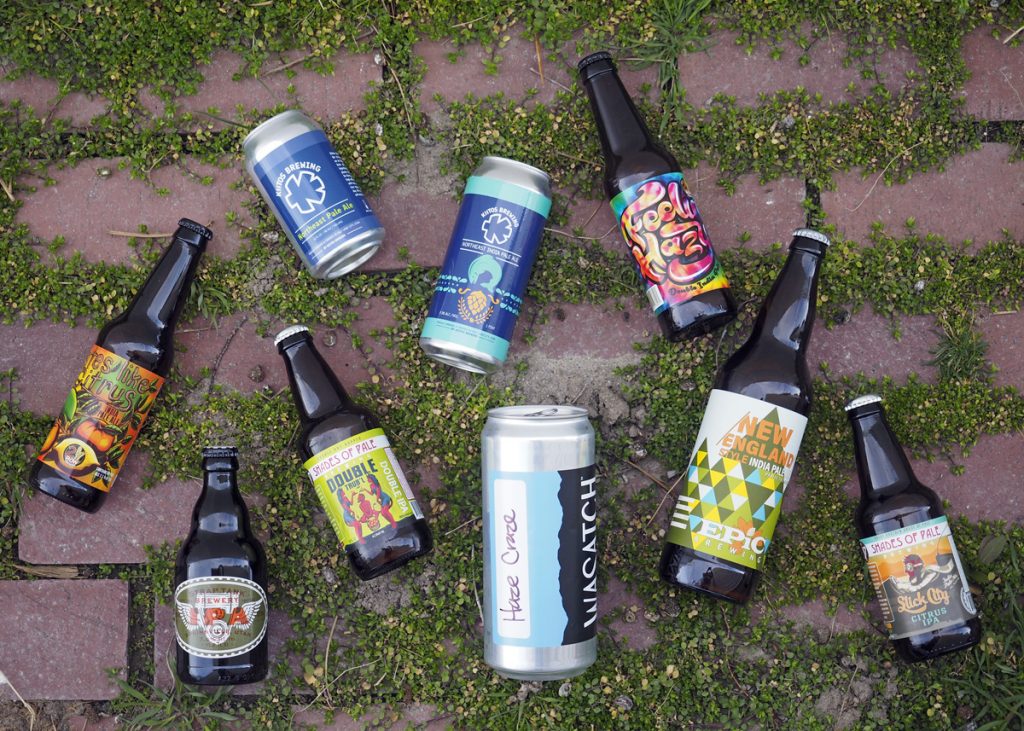 The national epidemic widely known as the “Haze Craze” has finally infiltrated our state. More local brewers have succumbed to the trend and are now in the throes of a friendly battle, striving to create outstanding versions of the New England/Northeast IPA (or NEIPA), each one better than the last. Haze-heads are rejoicing as they rush to acquire the latest cloudy hop-loaded brew. The Utah Haze Warz are in full swing!

If you’re unfamiliar with the style, go back and read our previous post, The Forecast is Hazy, to get up to speed. One update is that Brewers Association Style Guidelines will now recognize Hazy or Juicy India Pale Ales. So, the style takes the leap from experimental to mainstream.

A few of Utah’s breweries weren’t shy to embrace the NEIPA trend and entered the game early. Here are the ones who did it first in our state. 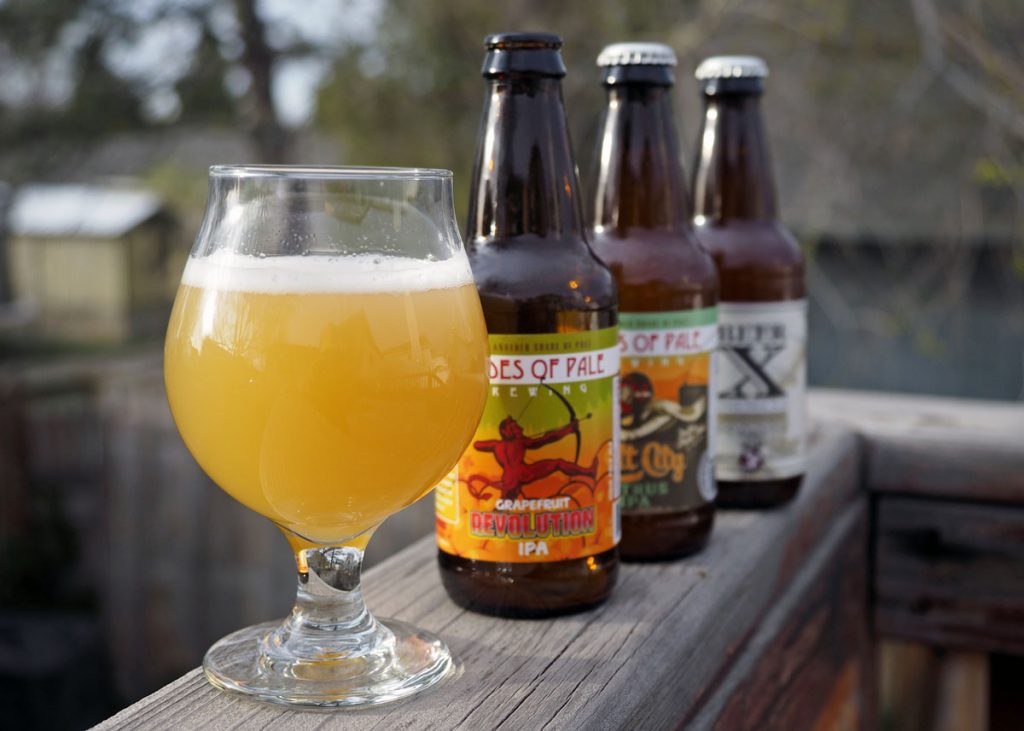 Trent Fargher, owner and brewmaster of Shades of Pale, was brewing a hazy, juicy IPA, now known as Grapefruit Revolution, well before the NEIPA trend came along. Intending to create an IPA that would be something like a Belgian Wit, but without the Belgian yeast, and embracing more of a fruity flavor, he used white wheat, oats, and pilsner malt (not typically used in IPAs) and toned down the use of bittering hops, opting for late addition and substantial dry-hopping instead. At the time nobody wanted a hazy IPA, and the new creation didn’t sell. But, Fargher loved it so much he refused give up. When the style began to gain popularity, Shades of Pale added two high-point versions, the 7% ABV Slick City IPA and the 10% ABV Double Trub’l, to their lineup in addition to the 4% ABV Grapefruit Revolution. Now that “hazies” have hit the big time, these are the brewery’s best sellers.

Although many breweries are not adding hops until the last five minutes or even after the boil, Shades of Pale head brewer, Marcio Buffolo, still employs some early hop additions to maintain complexity. Despite popular belief, haziness and body are completely separate. Haze is the result of particles in suspension: protein, yeast, hops, or additives. Simply depending on these particles to create haze, will result in a temporary effect that will eventually surrender to gravity and fall out of suspension. Buffolo adds a small amount of protein-binding tannic acid to the mash or during conditioning for a more durable haze factor. Body is associated with residual non-fermentable sugars achieved by using special malts that contribute maltose during the mash and a higher mash-rest temperature. Non-fermentable sugars add to the sweetness of the beer and can be balanced by hop bitterness. Another consideration is the oils (lipids) released into the beer during dry-hopping. These lipids are protein buffers and can affect head retention if not stabilized with the addition of oats, wheat, or other additives. 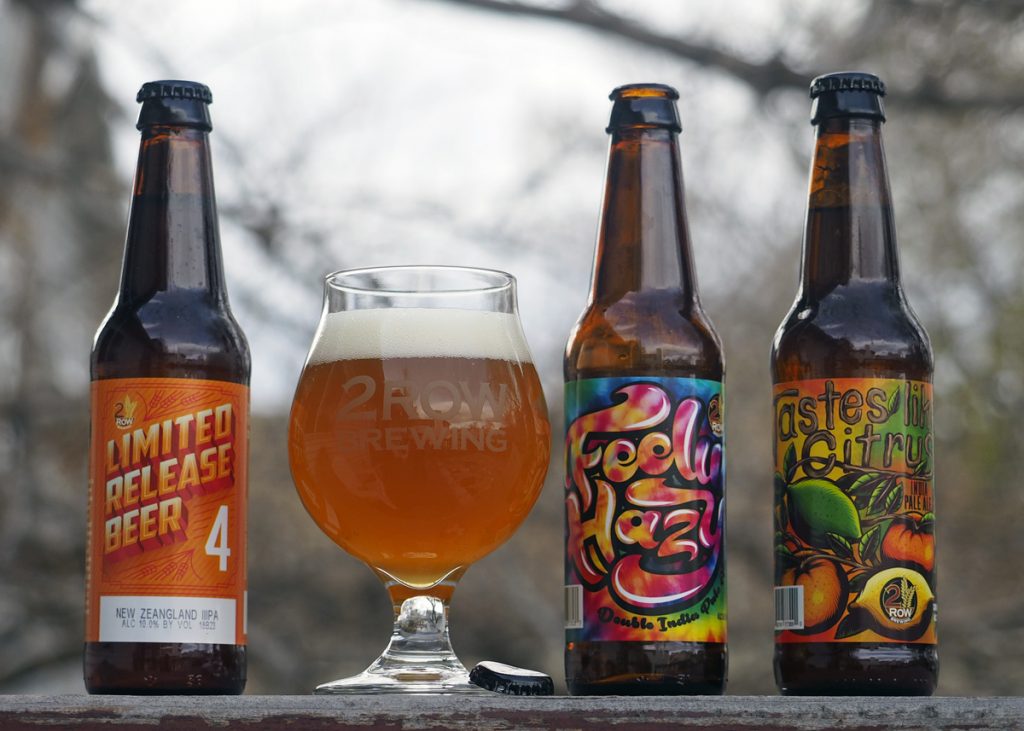 The bar for what constitutes a high-quality NEIPA in Utah was set high by the relatively young 2 Row Brewing. Brewer and owner, Brian Coleman, is a perfectionist when it comes to his craft and is especially particular when it comes to water chemistry, an important element in the NEIPA. His focus is on flavor rather than the haze factor, so the visible cloudiness may not be as pronounced as some. Tastes Like Citrus (7.5% ABV) and Feelin’ Hazy (9% ABV) started out as special releases, but quickly became a staple for IPA-loving beer drinkers in Utah, and a hot item for beer traders out of state. The newest member of the 2 Row hazy squad, the sticky sweet New Zeangland IIIPA, uses Motueka hops from New Zealand and comes in at over 10% ABV, though you won’t taste all of that alcohol. There are currently no plans to make New Zeangland a regular, so be sure to get some when it next releases. 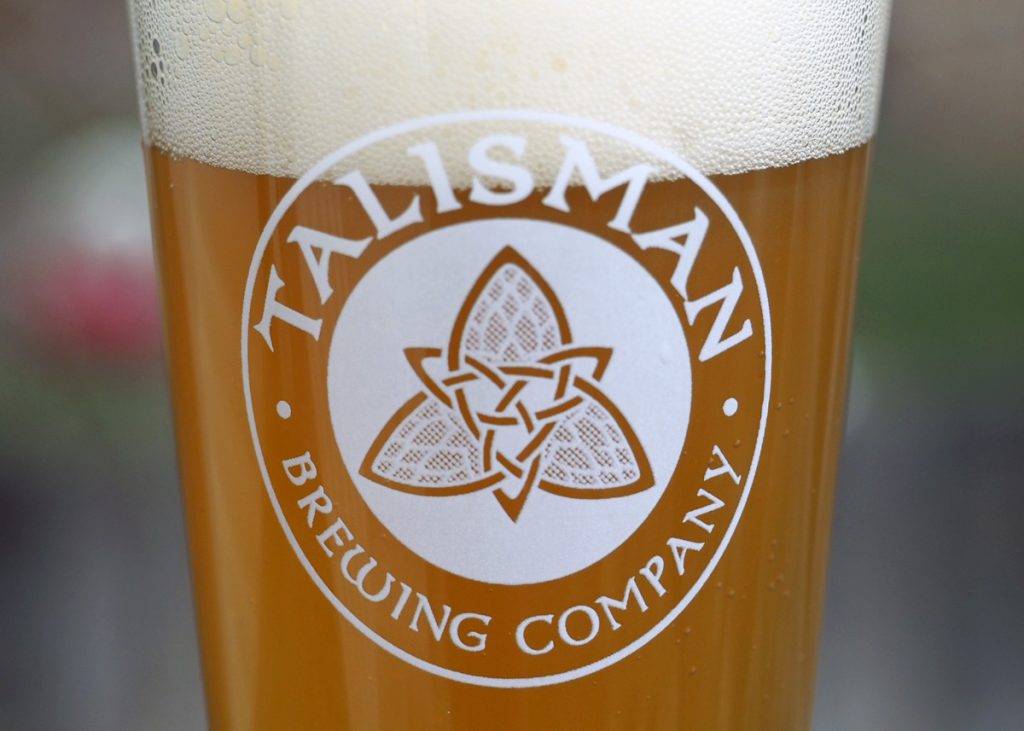 The fairly new brewery out of Ogden, Talisman Brewing Company, had some early success with its Northeast IPA, launched from the experimental Talisman Presents label. It sold quickly and received good feedback. Their newest line, Adventures in IPA, will feature rotating versions of various IPAs. The current release represents an East Coast style flavor profile, but isn’t hazy. Talisman founder and brewmaster, Dusty Williams, doesn’t believe that a beer needs to be hazy in order to be juicy. “Consumers look for the haze and think the more hazy and cloudy then the juicier it will be. I don’t agree with this, and I think [it’s] a very common misconception. The Adventures in IPA that we just brewed is just a simple recipe with really fruit forward hops (Citra, Amarillo, and Mosaic). I think it could definitely fall within the Juicy/hazy category even though [the beer] is fairly clear.” 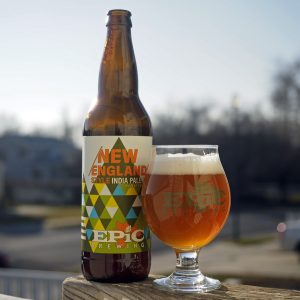 Also early aboard the hazy train with Blizzard Conditions (a collaboration with Telluride Brewing), Epic Brewing, currently has a rotating series of NEIPAs they like to call “Praise the Haze.” Utah has seen two of the four versions, Citralush and Pulp Addiction, but a third hop bomb is on its way. Also, look for the juicy, slightly hazy American pale ale, RiNo, set to hit the shelves in mid-April.

These breweries have recently entered the Utah haze scene, giving the OG crew a run for their money! 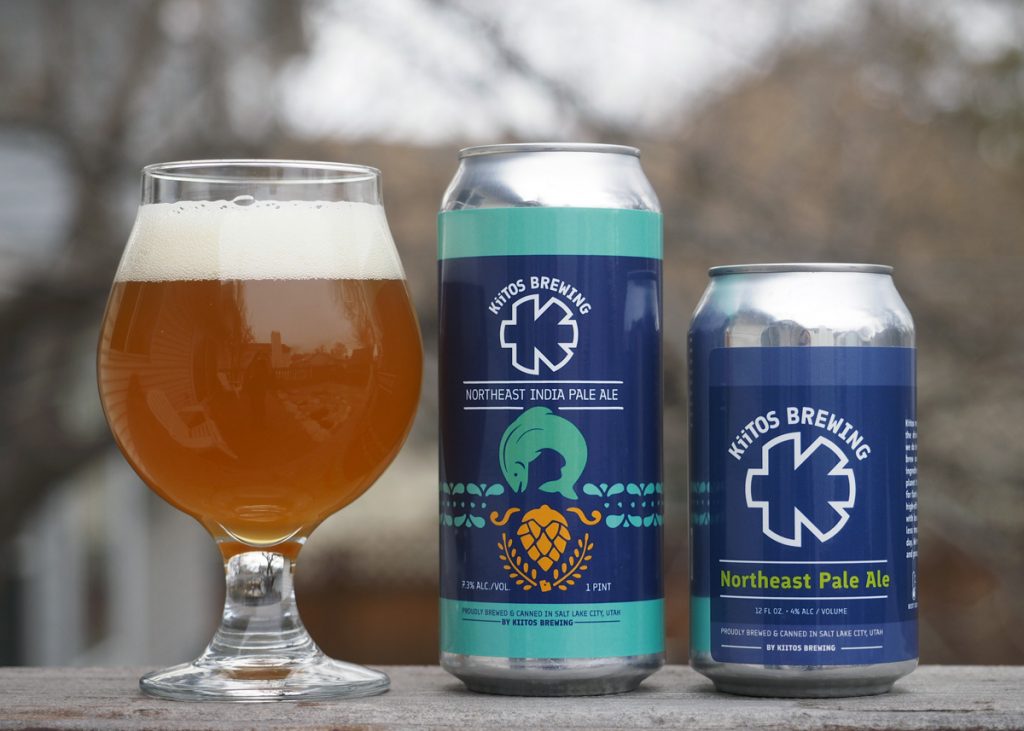 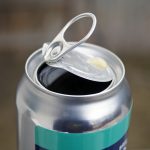 Still the newest brewery in Salt Lake City, Kiitos Brewing, really came out swinging. Head brewer, Clay Turnbow, has managed to produce one of the best NEIPAs in Utah on his first go-around. Kiitos first released a NE Pale Ale at 4% ABV, and then a high-point 7.3% ABV version sold in 16 oz. cans with 360° pull-tabs (entire lid is removed). With the top removed, the can becomes cup that allows you to experience more of the beer’s aroma than you would by drinking from a standard can. A fresh batch of the high-point cans will be available in the next week with a similar roster of hops (Citra, Comet, and a small amount of Cascade), but will now have some Mosaic thrown in as well. 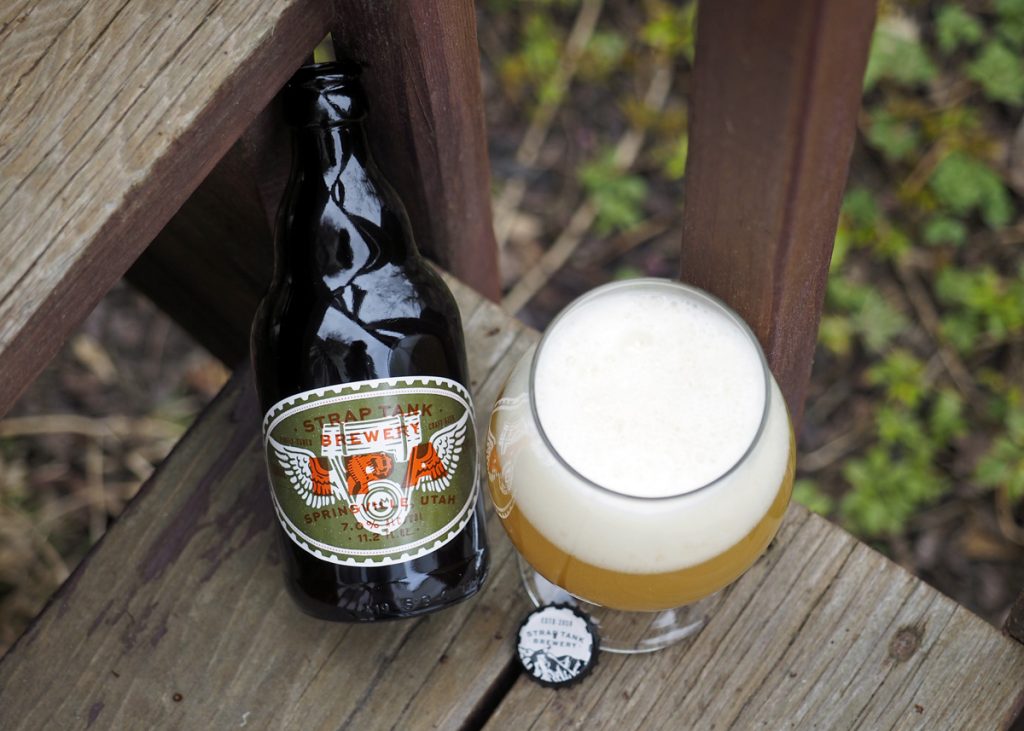 Utah County’s first brewery in more than a century joined the game in early February with Merkel, a 4% ABV draft NEIPA. The 7% ABV bottled version, released later that month, features a generous amount (5 lbs per barrel) of Citra and Mosaic hops (no bittering hops) and over 25 pounds of soursop purée per barrel. It’s looking mighty sexy in those fancy bottles and has a flavor that really knocked my socks off! Strap Tank head brewer, Mike Dymowski, is a genuine student of all things brewing and has been aggressive in his quest to produce an amazing version of the style. This week, Dymowski teamed up with Clay Turnbow from Kiitos for a collaboration 4% ABV hazy made with AU Summer, GR Huell Melon, and Citra hops. This new version should be available at Strap Tank in early April. 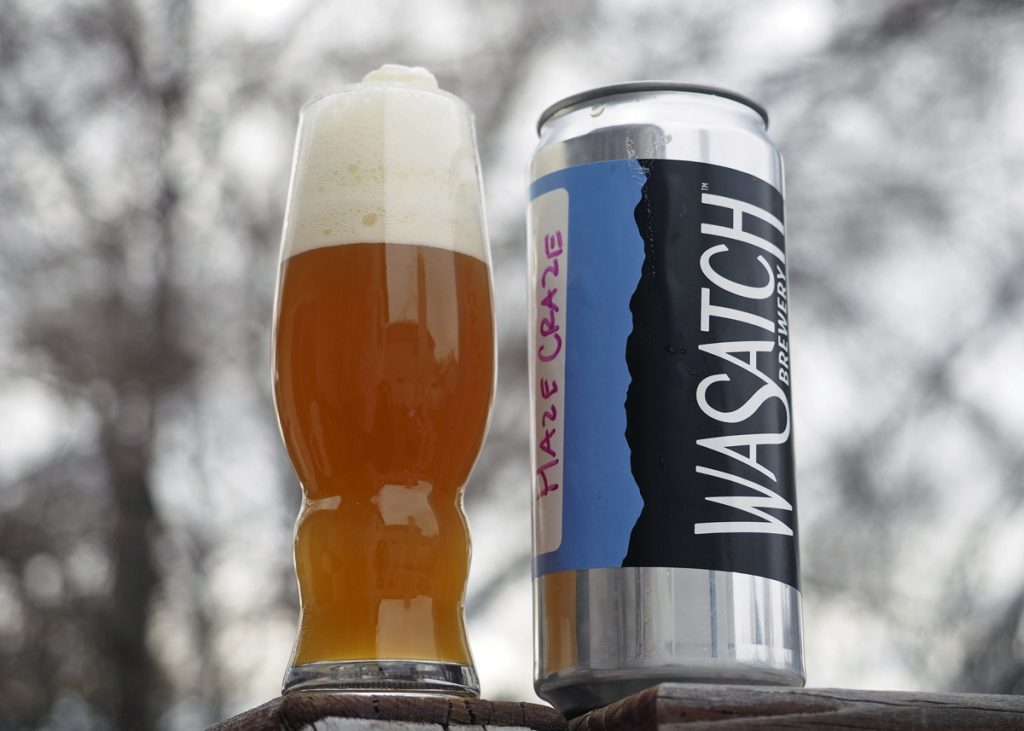 The head brewer at Wasatch Brewpub in Park City, Nils Imboden, has been a skeptic of the NEIPA style, but even he has surrendered to the wave of haze lovers with his submission, the aptly named Haze Craze. I asked him what makes Haze Craze a good beer and he had a simple answer, “Hops. Lots of f@#*ing hops.” These are mostly dry-hop additions introduced during and after fermentation. The beer also boasts the usual minimal amount of bitterness and a decent body derived from crystal malts, wheat, and oats. What’s difficult is anticipating how the hops used will come across in the end. Even when hops aren’t added to the boil, they may still contribute some bitterness.

Imboden also considers the “haze factor” to be fairly unimportant. “I can make [it] just as juicy [with a] heavy mouthfeel if [the beer is] clear,” he tells me. “One of my least favorite things to read or hear is ‘oh, that looks amazing!!’ Thus, they’re gonna buy it. It could be total dog sh#t!” Imboden’s passion carries over into the quality of the beer he makes. Haze Craze is good! It’s also a really great value. A lot of the types of hops used in this style are not cheap and are used in large amounts for the batch size. Many breweries do charge more for them, but a 32 oz. crowler of Haze Craze only cost me $3.99 at the West Side Tavern. Score! 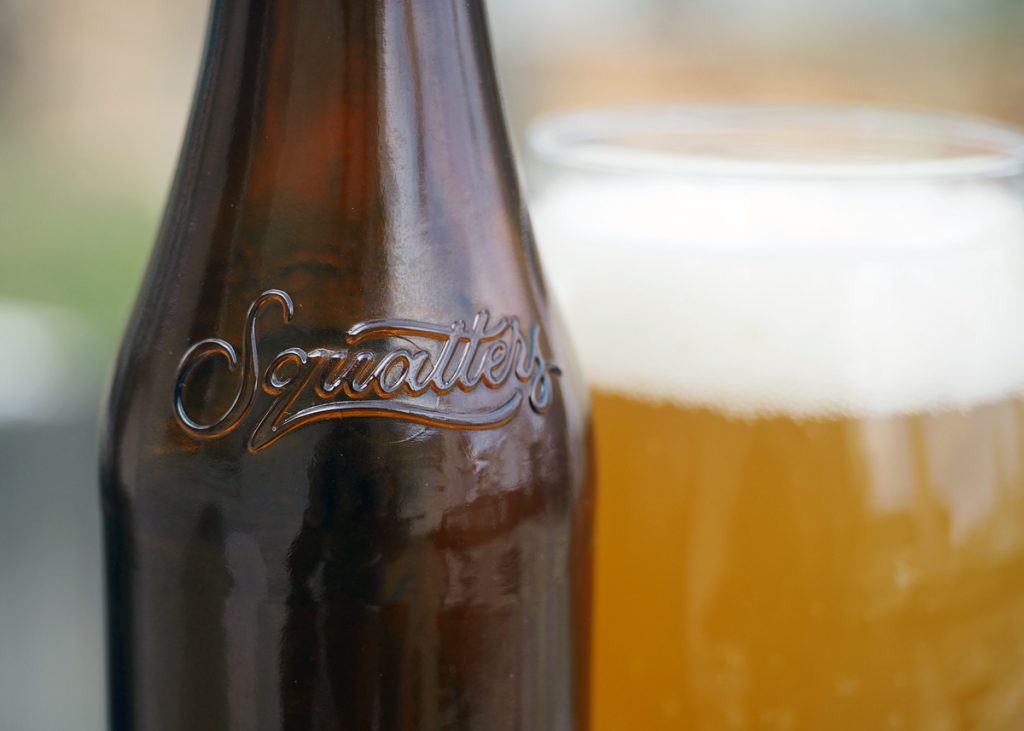 The downtown Squatters Pub is the latest to try the NEIPA. Head brewer, Conor Papineau, just released the 4% ABV Milky Way made with Galaxy, Comet, and Cascade hops. This isn’t his first attempt, but after doing some research to better understand the style, he’s finally hitting the mark. “I changed up the hop schedule,” he tells me. Rather than adding hops in the last five minutes of the boil, he’s now waiting to add them into the whirlpool as well as before, during, and after fermentation. Papineau has also perfected the water chemistry to keep the beer from becoming either too chalky or overloaded by tannins from the hops. By the end of April, look for a new high-point version called Meteor Shower. This will be released in 16 oz. cans courtesy of Squatters’ new two-head can filler. I was able to taste the test batch, and I can tell you that you’ll want to be sure and try it when it comes out. The combination of Galaxy and Citra hops give this beer the perfect balance between tropical fruit, citrus, and dank flavors.

It’s been super interesting to speak with local brewers about their take on the NEIPA/NEPA trend. Though they all have slightly different strategies when creating them, there is certainly some consensus, and experimentation is still underway. Utah’s 4% ABV draft law does make things a bit tricky. It’s much harder to achieve the low bitterness with that amount of hops in such a light base beer. It’s easier to balance things with a higher ABV and more residual sugars to add that bit of sweetness and body. Although, I can certainly appreciate a West Coast style IPA, I’m really digging this new take on hoppy beer that has been sweeping the Nation. It’s not so bad to be caught in the crossfire of Utah’s Haze Warz.