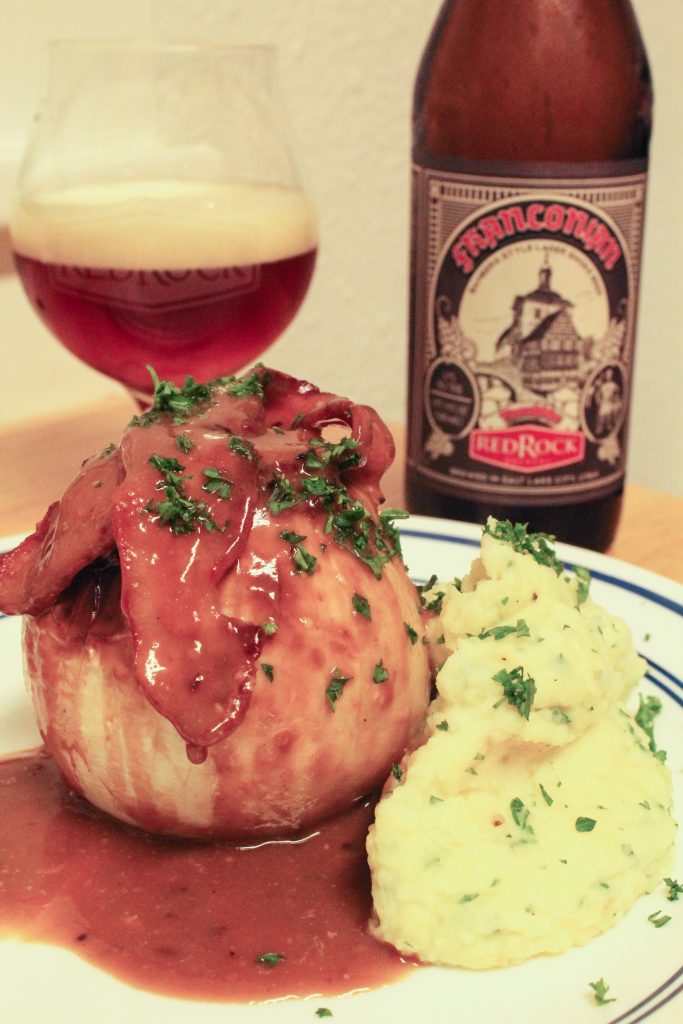 Spending ten days traveling around Germany with some of the world’s most intelligent and upcoming female beer industry workers was a delight I never saw coming. Thanks to the Pink Boots Society and its supporters, I was able to sample some of Germany’s finest food and beer while learning about its beer culture, history, and traditions. I blindly held tight to the idea we were on this trip for eternity, and found myself predictably crushed at its end. And so I’ve been making due with keeping contact via the internet, sipping on a few bottles of smuggled pilsner, and somewhat effectively replicating German cuisine at home. The latter of which I will now share with you in the form of the Bamberger Zwiebel.

Hailing from the smoke beer capital of the world, the Bamberger Zwiebel (Bamberg Onion) is a hearty dish I had at the famous Aecht Schlenkerla pub in Bamberg, Germany. It is a seasoned ground pork stuffed onion topped with bacon and drowned in rauchbier (smoke beer) sauce, and served with mashed or boiled potatoes. I loved the dish so much, I had it twice! I immediately took pictures and notes, knowing I had to attempt making it when I was back in the States.

I should amend that last sentence. I knew I wanted my boyfriend Erik to attempt making it, as my cooking skills are kaputt (broken). Thankfully, the recipe for Bamberger Zwiebel is available for all to see on the Aecht Schlenkerla website. And though I cannot keep Erik from the un-Germanly practice of tinkering with a traditional recipe, I think it came out pretty damn good!

Here are the steps for making your very own traditional-ish Bamberger Zwiebel.

Note: You WILL have leftover ingredients. I recommend either doubling the recipe and having guests over (depending on how many people you’re trying to feed initially) or making a dope breakfast the next day. OORRR making the Bamberger Zwiebel two days in a row. 😉 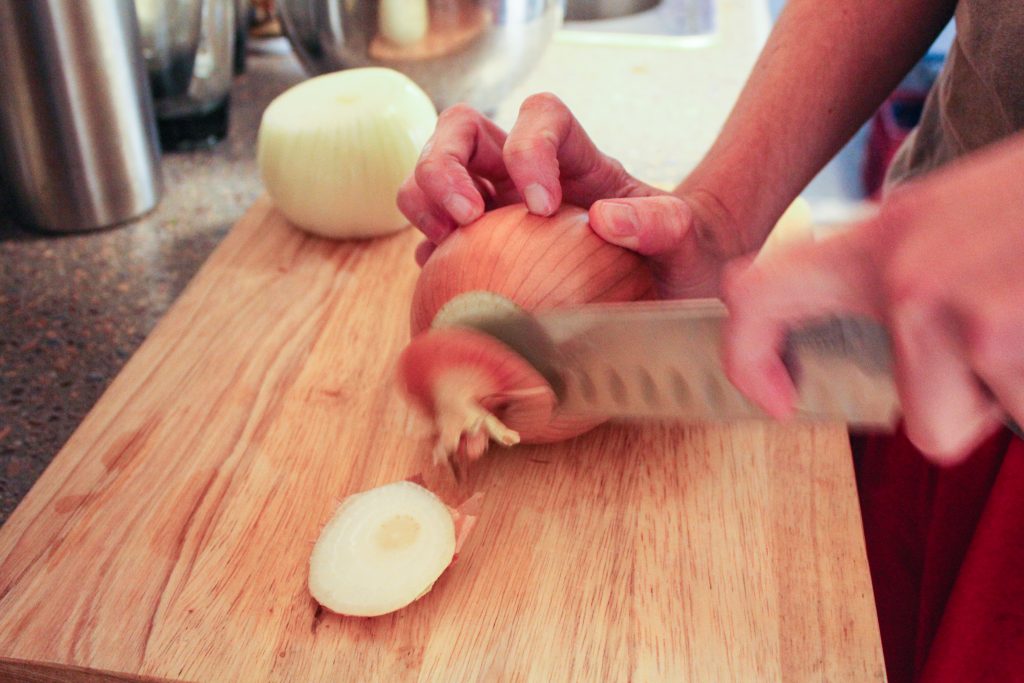 -Cut the ends (root and top) off of each onion – about ½ inch should be good. Peel them suckas. Dig out the center until you’re left with 2-3 layers. If you’ve got pumpkin carving tools lying around, use them! It’s tough to get started, but you’ll get through. I believe in you. 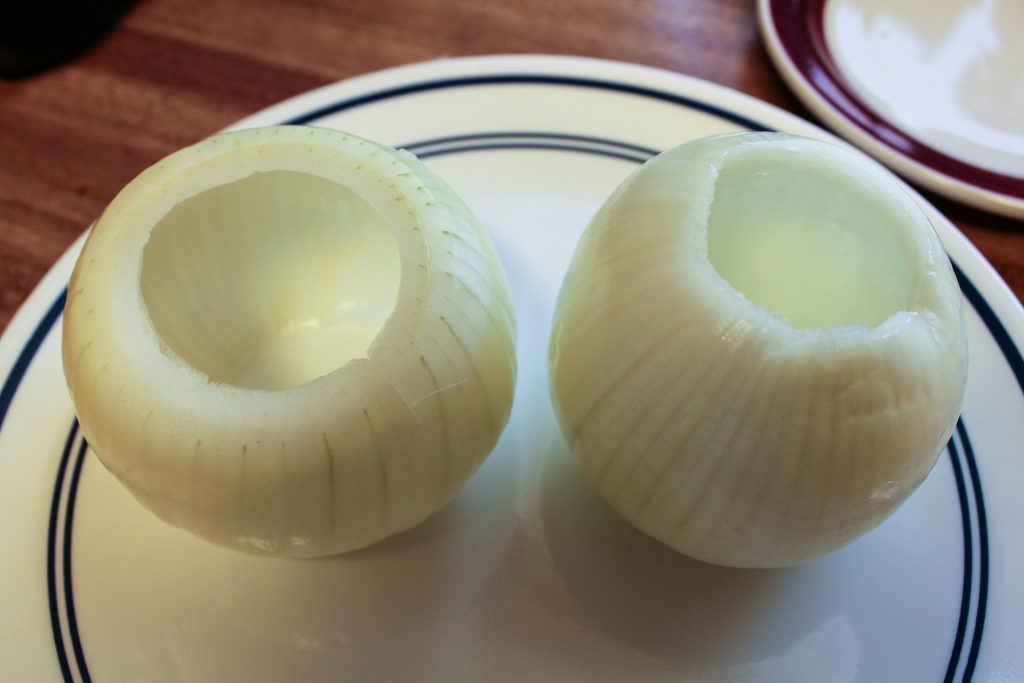 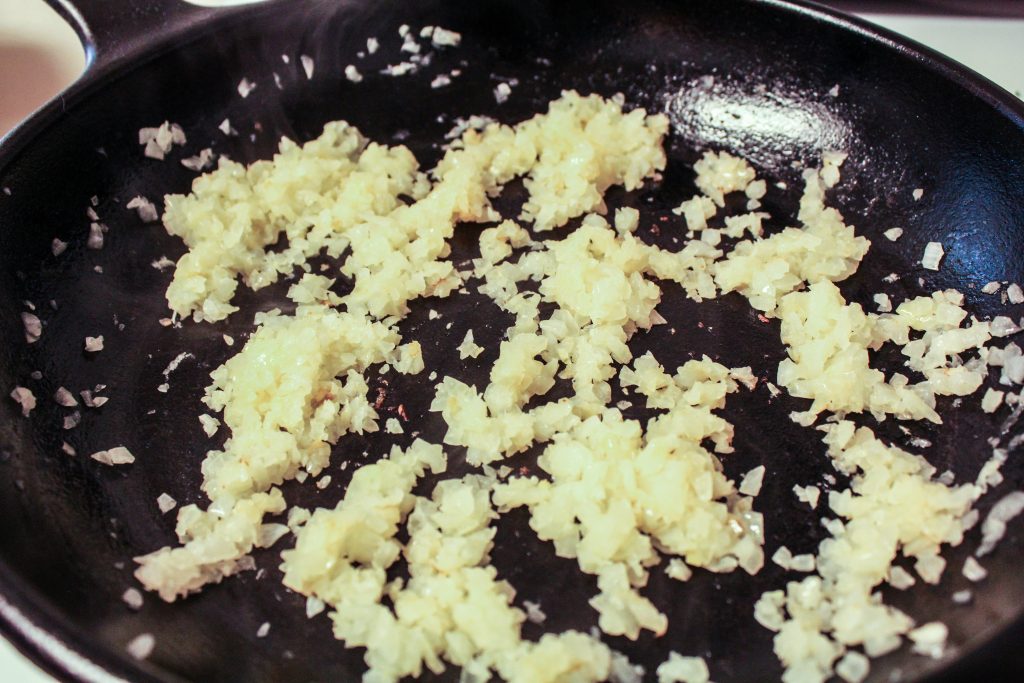 -Dice up half the onion innards and lightly saute them in a pan with olive oil. We used a cast iron skillet for the this, which we also used for baking the onions and making the rauchbier sauce. Save the other half of the onion guts for a lavish breakfast.

-When the onions are sweaty and slightly brown, add them to the bowl and turn off the heat. Mix the contents of the bowl thoroughly. Get your hands up in there for an extra-sensory experience. 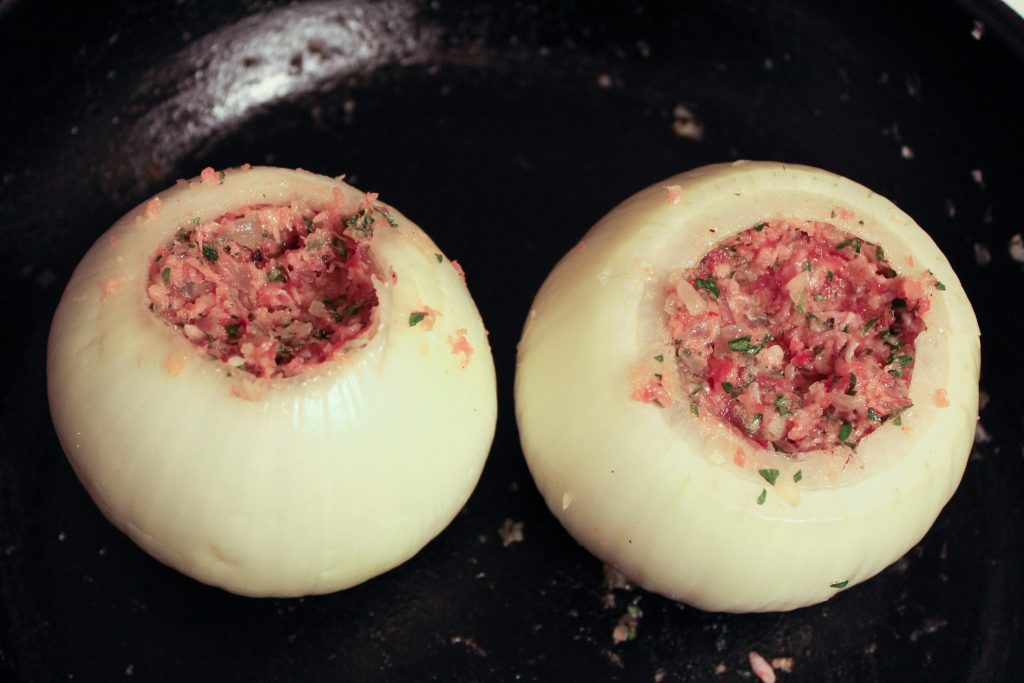 -Place your cored onions in the cast iron and stuff them with the meat and seasoning mixture.

-Cover the bottom of the pan with a generous amount of beef stock, and if you’re fancy, a splash of white wine.

-Pop those babies in the oven and add beef stock as needed to keep them happy. Though the traditional recipe recommends a bake time of 45 minutes, you’ll need more time if you’re at a higher elevation. At 4,300 feet, we baked them for an hour.

-Now is a good time to prepare your side dishes. We made mashed potatoes with milk, butter, garlic, parsley, salt, pepper, and ricotta. 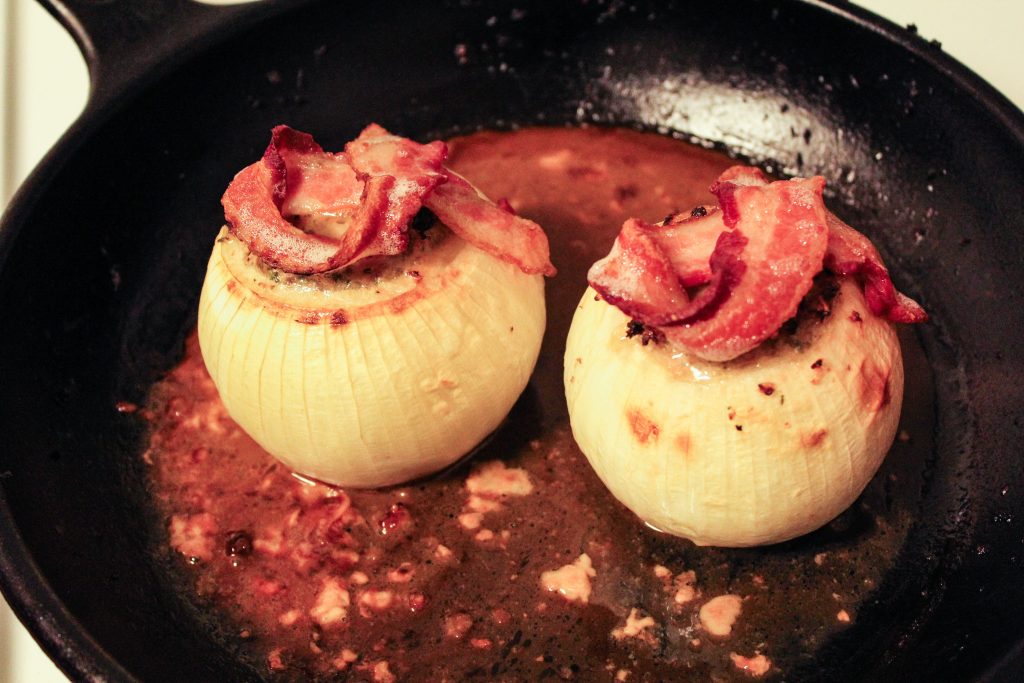 -After 30 minutes have passed, drape a strip of bacon over each onion and keep baking. If you want, baste the onions in their own juices. Wipe the drool from your mouth.

-When the onion has reached an internal temperature of 165° F, they’re done! Remove them from the oven and place the cast iron on the stovetop. Place each of the beautiful onions on their own serving plate and set aside. 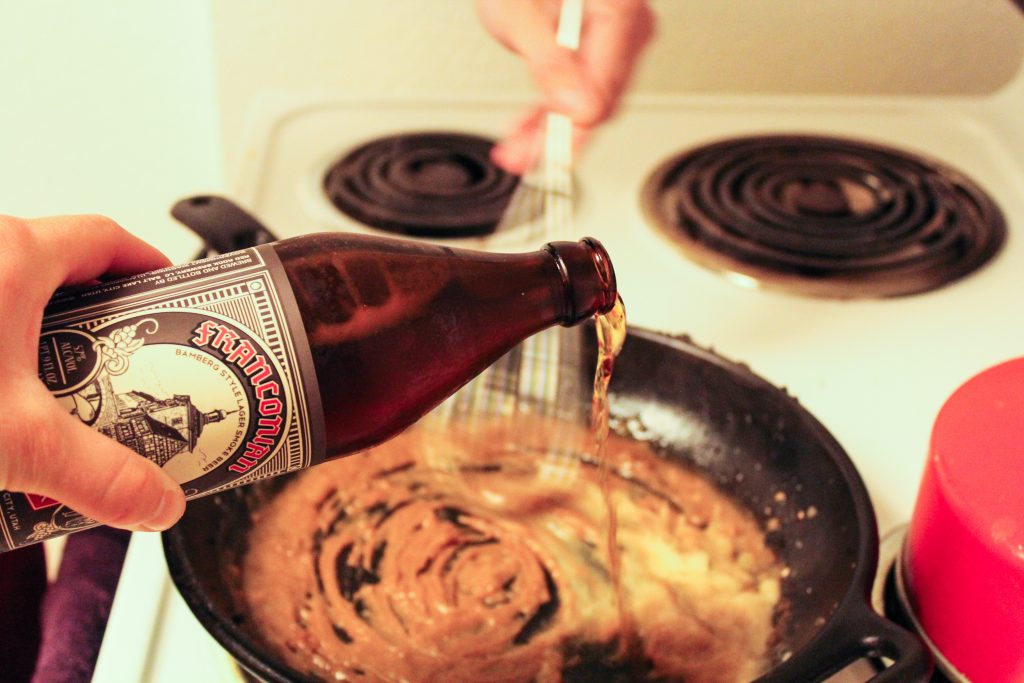 -Time to get saucy! While gently whisking over medium high heat, add flour to the drippings. Once the flour and drippings have combined, slowly add the rauchbier and a big splash of beef stock. Reduce the heat to medium and whisk occasionally until the sauce is to the desired viscosity. 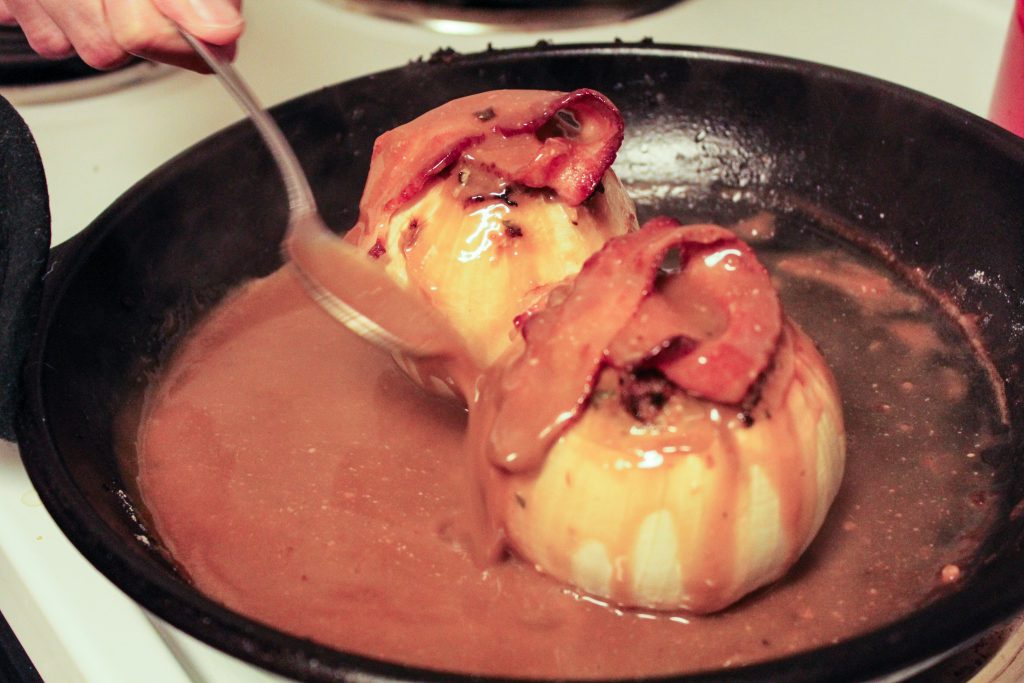 -This is it. We’re so close! Next to the onions, plop down a hefty serving of mashed potatoes. Smother the Bamberger Zwiebel with a generous amount of rauchbier sauce. Garnish with parsley and serve with rauchbier. BOOM! 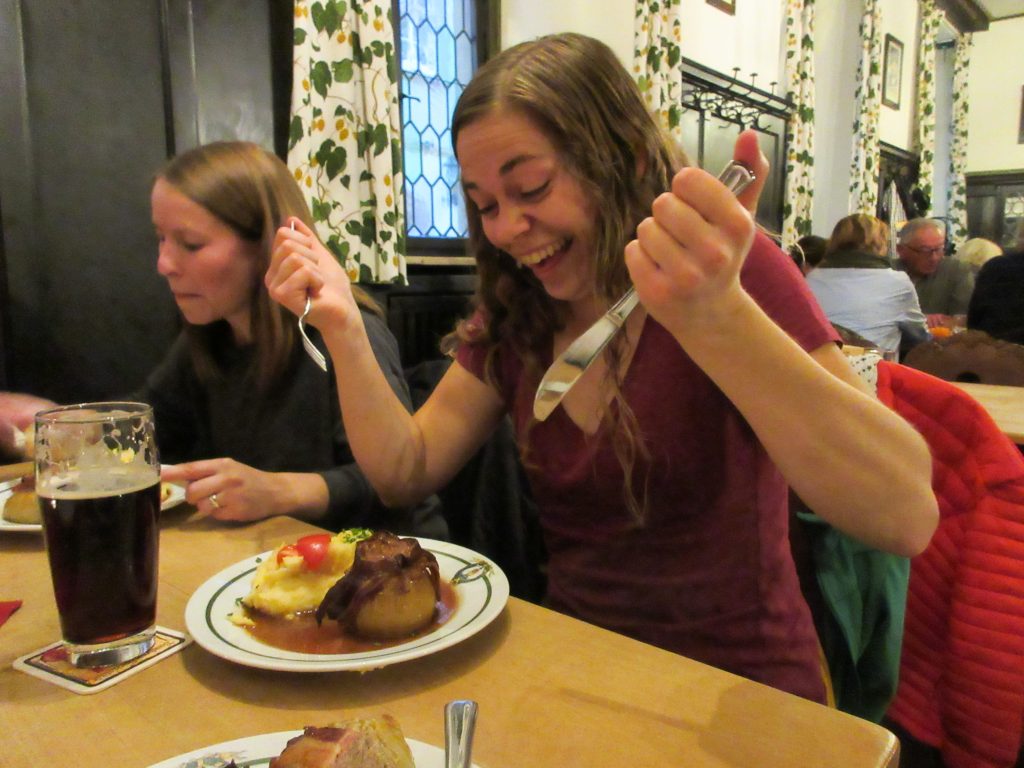