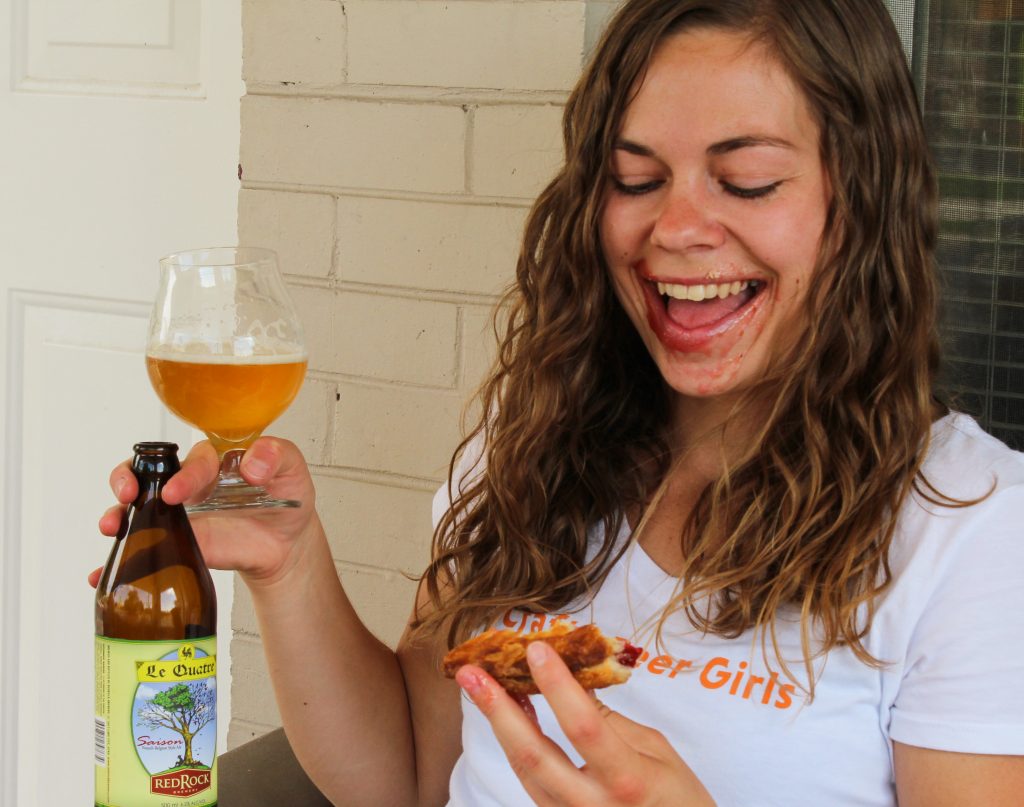 Never heard of Pie & Beer Day? Well you best adjust your bonnet and lend an ear! Pie & Beer Day is a holiday celebrated in Utah on the very same day Mormons celebrate Pioneer Day, July 24th. The origins of Pie & Beer Day are a bit hazy, but the beer-loving Utah counterculture has embraced this non-religious alternative to Pioneer Day with open arms. For a more in depth explanation, check out Jenni’s post on last year’s festivities: Pie and Beer Day: Utah’s “Other” Holiday.

Pie & Beer Day has exploded in popularity over the past few years, mostly thanks to the Pie & Beer Day celebration hosted in downtown Salt Lake City at Beer Bar by Bad Brad Wheeler of 90.9fm KRCL and Salt Lake City Weekly. Attendees 21 and over can purchase a pie pass that entitles them to five pairings of pie and beer from local bakers and breweries – more than enough to get into the festive spirit! The 4th Annual Pie and Beer Day event will be held on Monday, July 24th from 3pm-7pm.

If you’re unable to attend or simply want to test the limits of your Thanksgiving stretchy pants, I’ve assembled a list of pie and beer pairings you can purchase to enjoy from the comfort of your own home! I selected five beers from Red Rock Brewing Company and five individual pie slices from Harmons Grocery, and set out to discover the very best pairings. If you’re curious about how to create pairings of your own, check out one of my very first posts on beer and food pairing 101. 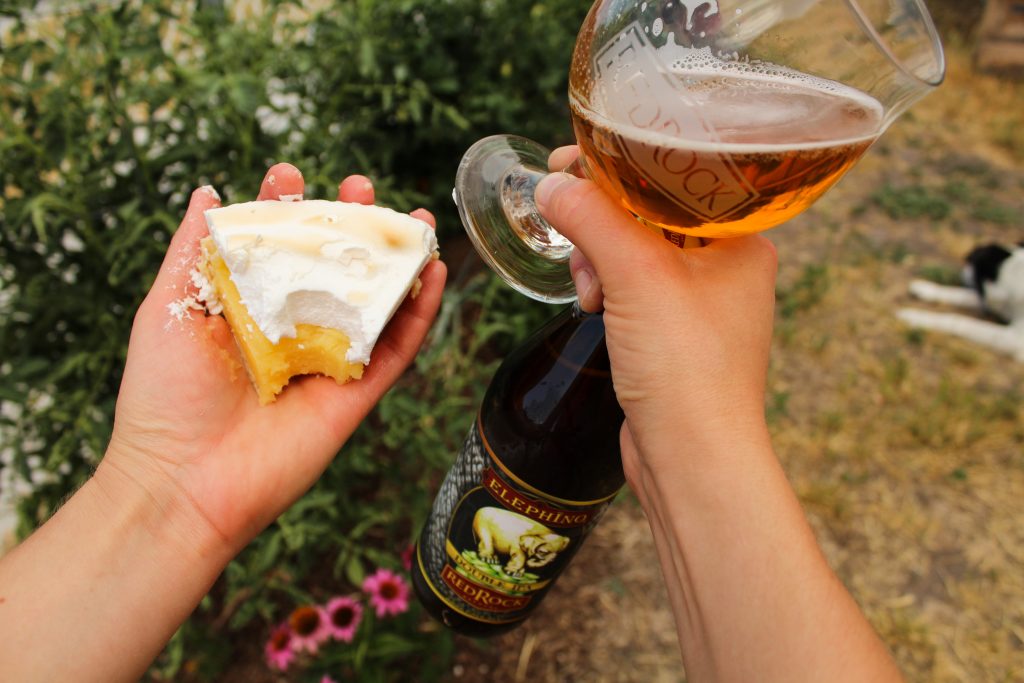 The first pairing I tried just so happened to be the most outstanding. With matching intensities and complementary flavors, this pairing was destined for the top of the list, and my drooling mouth. The tart lemon quality of the pie elevates the citrusy American hop flavors and vice versa, creating a lemon character that pops and sustains through the aftertaste. The egg white of the meringue creates a creamy mouthfeel that’s gradually scrubbed away by the beer’s carbonation, while the moist pie crust resonates with the caramel flavors of the supporting malt in the beer. The level of harmony in this pairing is about as balanced as it gets. Neither food item overshadows the other, and the combination creates a better flavor experience than each item alone. It’s like 1 + 1 = 3. If you can only try one of these pairings, this is it. 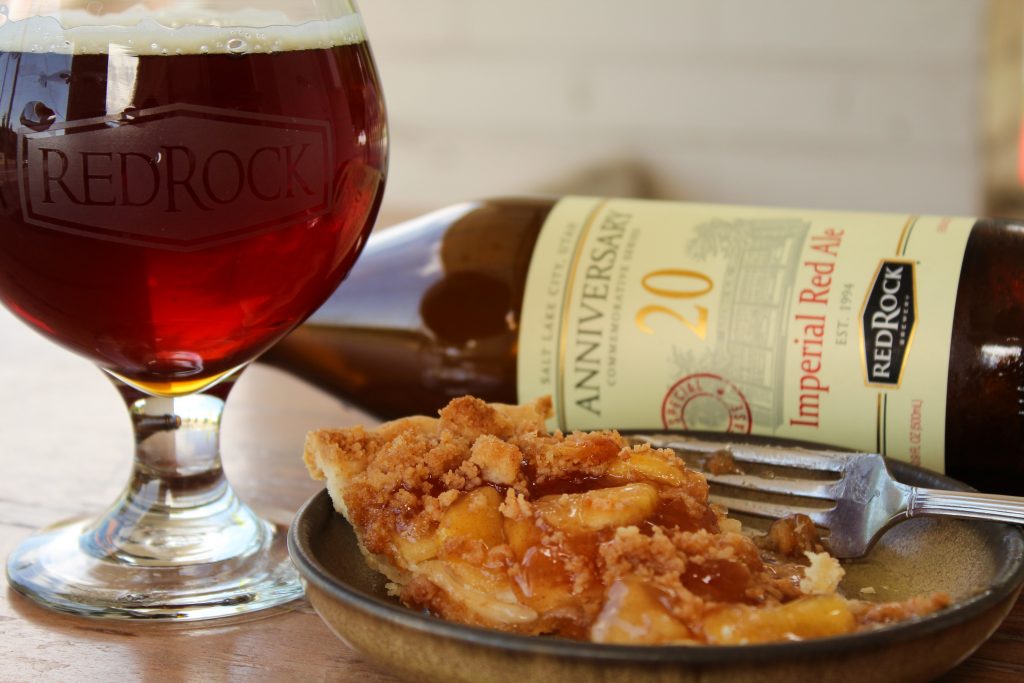 Anniversary IRA (Imperial Red Ale) is a complex, boozy beauty that can easily overpower a delicate pie. While it has a lot of different flavors to offer for pairing possibilities, it takes the right pie to get the job done. The other pies I tried pairing with this IRA were quickly dominated and washed out by its 9.5% ABV and big attitude. But the French Apple Pie, with its crumble top and gooey center quickly tamed the IRA’s bold nature. The rich malt character of the beer elevated the apple and brown sugar notes in the pie and vice versa. The crunchy apple and crumble topping added complexity to the otherwise gooey mouthfeel. The sticky pie filling played a critical role in standing up to the beer, as it allowed the pie to stick to the inside of your mouth long enough to experience the play of flavors and mouthfeel. Less sticky pies didn’t stand a chance. The toasty notes of the malt, filling, and crust in conjunction with the impressive alcohol content made for a combined flavor reminiscent of apple brandy. 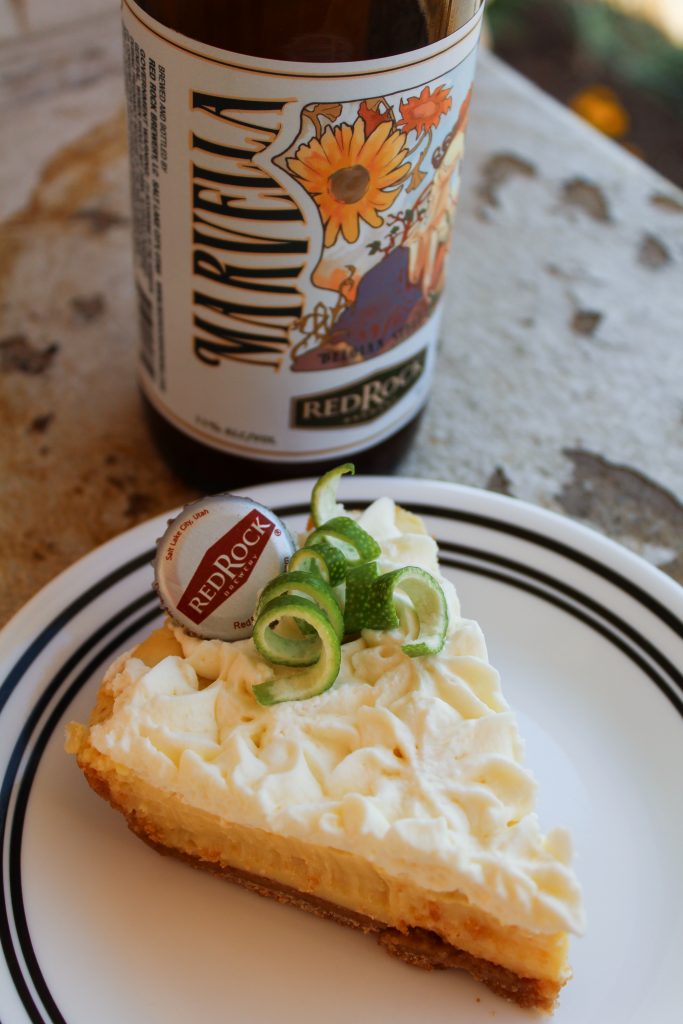 Marvella is a sneaky temptress. She’ll lure you in with candy-like flavors of banana runts and sweet bubblegum and then intoxicate you with her 11% ABV. It’s no wonder the Belgian tripel style often sports beer names like Duvel (Devil) and Lucifer. Like the IRA, Marvella requires some taming. The Key Lime Pie whipped Marvella into shape by toning down the alcohol and balancing her candy-sweetness with the earthy, caramel notes of the graham cracker crust. The tart lime flavor of the pie played nicely with the fruity banana character of the beer, while the pie’s creaminess melded seamlessly with the smooth yeast character of the beer. It was sinfully decadent. As an honorable mention, the Pecan Pie with Marvella created a combination of booze, fruit, and toastiness that’s a deadringer for bananas foster. 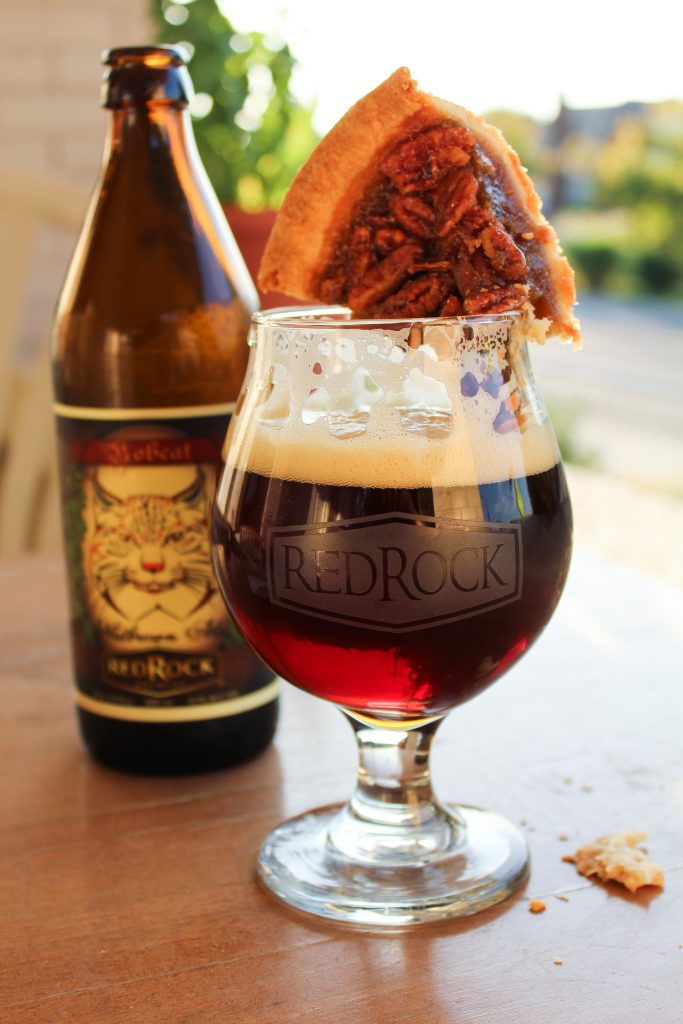 This pairing was a no brainer. Bobcat Nut Brown is an excellent go-to beer for pairing, and resonated with almost every flavor in the Pecan Pie, which surprisingly did not play well with most other beers. It may have been the texture, or the fact that by the time you were done chewing the pecans, you had already consumed the other good bits of the pie that made it difficult to pair. Nonetheless, it found a niche with Bobcat. Though none was present in either food item, bittersweet chocolate was the dominant flavor combination, accompanied by a chorus of toasty, nutty, earthy flavors and textures. The hop bitterness of the American brown ale was balanced by the sweetness of the brown sugar, while also resonating with the bitterness of the pecans. The resulting flavor combination reminded me of a hot fudge sundae sprinkled with chopped nuts. Brown ale pecan pie float, anyone? 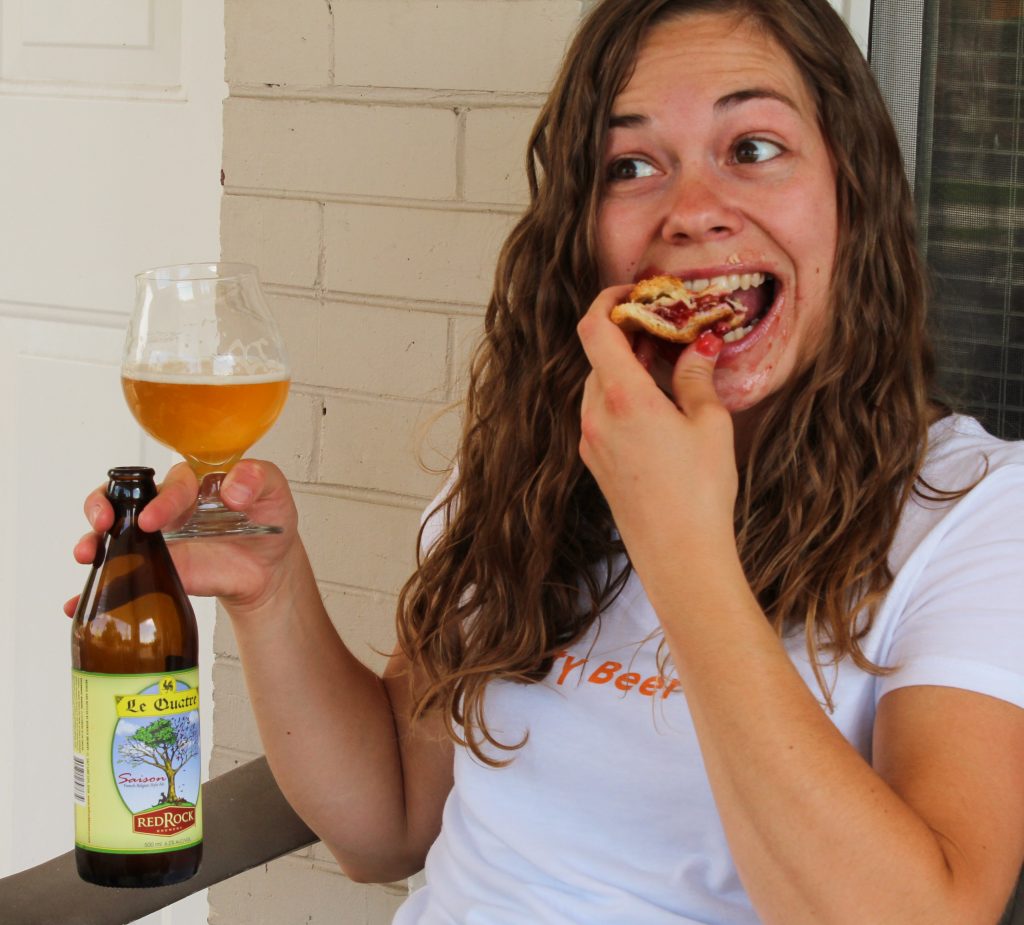 Saisons are inherently rustic in nature, originating in the farm region of Southern Belgium/Northern France as a safe way to hydrate farm workers when potable water was unavailable. Boasting flavors of subtle funk, citrus fruit, and black pepper, saisons are an excellent choice for pairing with food. And what better to pair it with than earthy, tart Cherry Pie? The main play in this pairing is complementary flavors and mouthfeel. The tart and tangy character of the pie elevated the beer’s subtle bitterness and spice of the yeast phenolics (black pepper, clove). The toastiness of the crust added an earthy complexity and paired well with the lighter malt flavors of the beer. The gooey pie filling made for a long finish that was slowly scrubbed away by the beer’s carbonation. The aftertaste was tangy and pure, like each ingredient came straight from the farm.

I think I still have room for seconds… 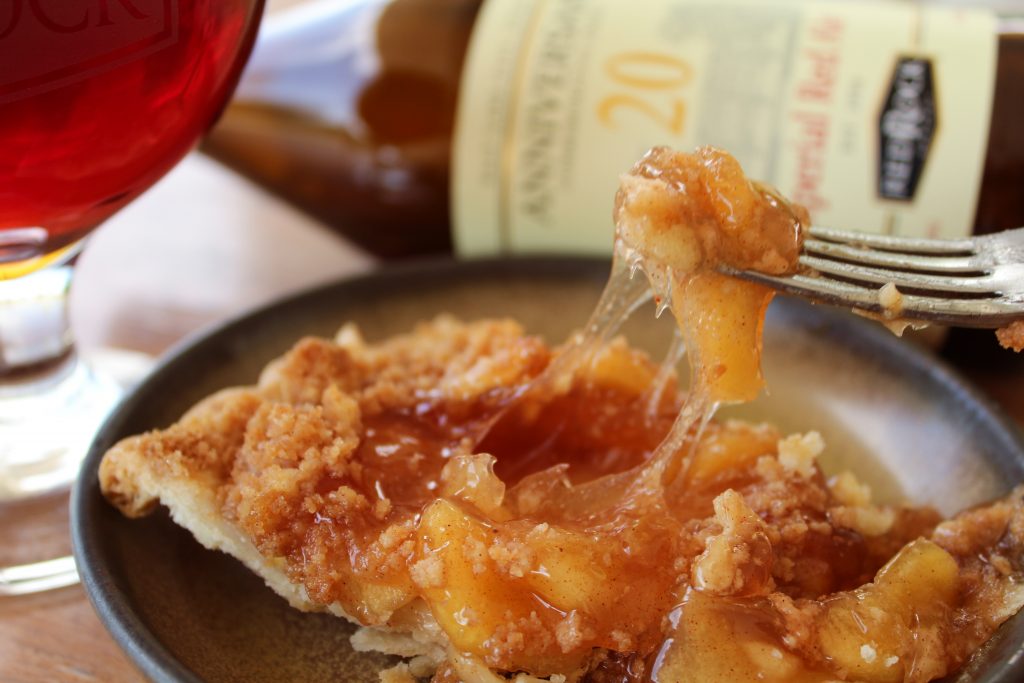