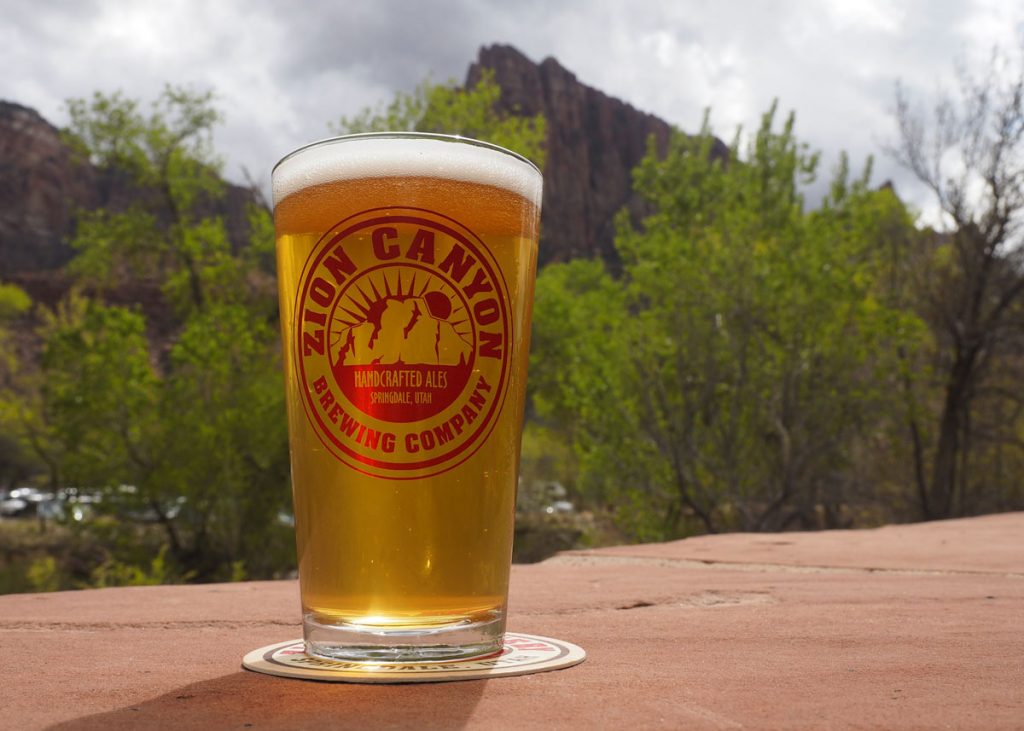 Southern Utah is arguably one of the most gorgeous places in the world, and the area around Hurricane (near St. George) in particular has a lot to offer. Hurricane (pronounced Hur-a-kin) is an up-and-coming mountain bike destination complete with an annual Mountain Bike Festival in March, and desert trail riding that rivals the more famous bike town, Moab. Besides the many mesas ripe with primitive camping and dirt/slickrock bike trails, this area is home to the cathedral-like red rock faces of Zion National Park. In addition to enjoying the unbelievable beauty of the park, visitors can stop on their way in for a beer at the Zion Brewery. 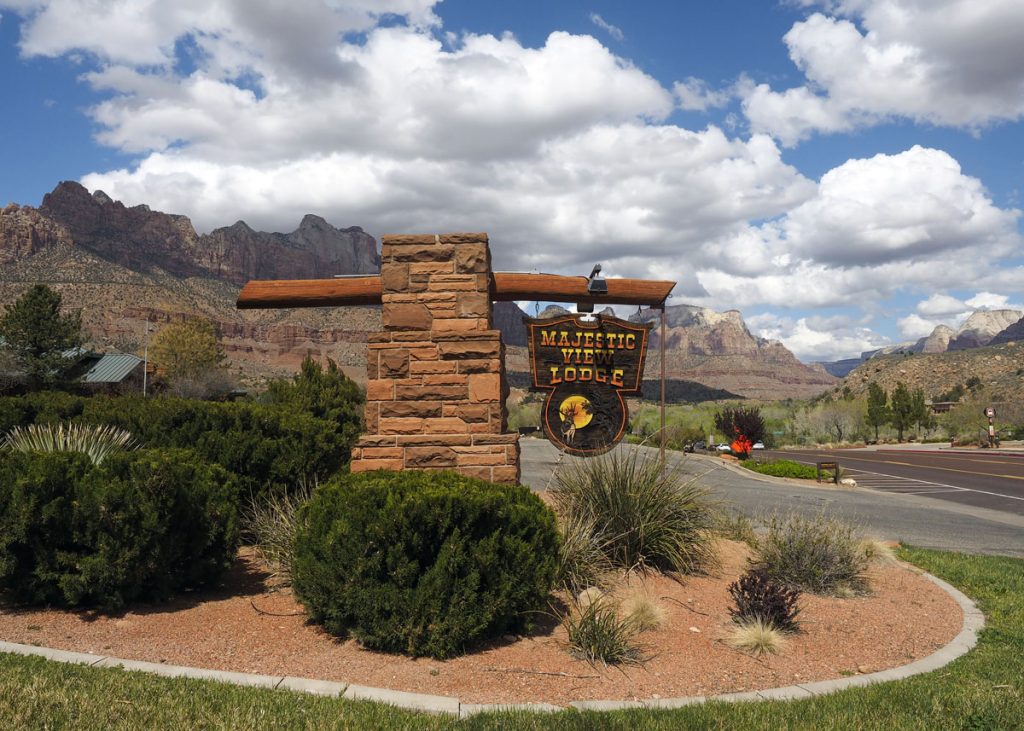 Zion Canyon Brewing Company, located in Springdale, Utah, was founded by the Harris brothers (Dale, Derek, and Glen). It opened in the basement of Majestic View Lodge back in 2006. Though not related to the lodge, the beer could be found on tap upstairs in its bar as well as other restaurants and bars in the surrounding area. Also, bottles of Zion Canyon beer were available in local grocery and convenience stores. The brewery initially flourished, but eventually it seemed to fade, and the beer disappeared from circulation. Or so I thought. 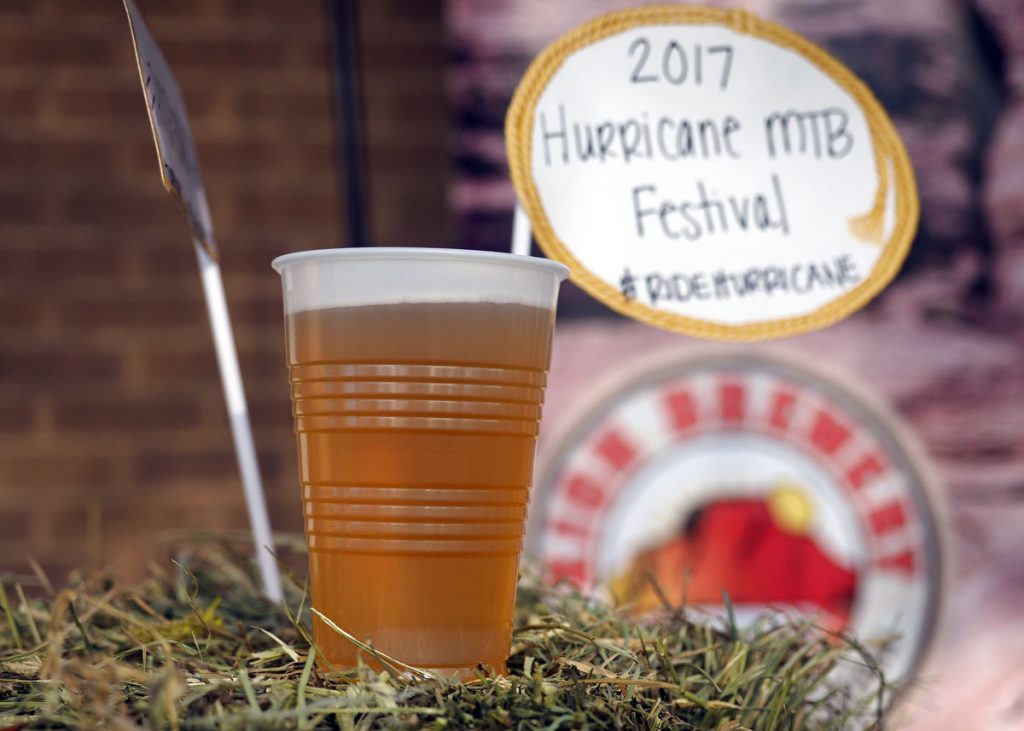 My husband and I are fans of the mountain bike scene in Hurricane and have traveled to the area many times. This year, as we made our usual plans to attend the Hurricane Mountain Bike Festival (hosted by Over the Edge Sports), I noticed that Zion Brewery was a sponsor and host of the festival beer garden. I hadn’t seen any Zion beer for quite some time so it was a bit like seeing a ghost. Truly, it was a pleasant surprise. I was excited to reacquaint myself and find out where in the holy heck they’d been hiding!

I had assumed the brewery closed, but soon learned that wasn’t the case. Instead, the brewery was sold to a father and son team, Brooks and Chris Pace, in 2012. The new head brewer, Jeremy Baxter, came on in 2013 and began making improvements including a rebranding that shortened the name to Zion Brewery. One of the first things Jeremy did was axe the bottling line to improve the brewery’s profitability and put the focus squarely on the beer. Then he turned his attention to the water source, the nearby Virgin River, which is quite variable and mineral-rich resulting in inconsistencies in the beer. The brewery’s investment in a reverse osmosis water filtration system has made all the difference.

Other improvements include installing a new glycol system and better insulation for the cooler, a very good thing considering the hot 100° summer temperatures in Springdale. Another invaluable addition to the brewery came in May of 2016 when Frank Giammalva came on as Zion Brewery’s Account Manager. Through Frank, the brewery has significantly increased the number of taps pouring Zion beer to 70. Since the reconfiguration of the brewery, they’ve doubled production from about 350 barrels per year to nearly 700 in 2016. Jeremy predicts they’ll break 1,000 next year. Zion self-distributes which does limit its range, so for now, you’ll have to travel to Southern Utah to enjoy it.

What about the beer, you ask? It’s delicious! Before coming to Utah, Jeremy Baxter learned his trade in Colorado from a brewer who taught him how to brew big flavors. He finds that translating his skills to 4% ABV beer (Zion currently only brews draft beer) can blur the lines between styles a bit, but it does force you to be a better brewer. His abilities come through in the Echo Canyon IPA which has a ton of hop flavor and minimal bitterness. It’s tough to pull off a session IPA and Jeremy does it beautifully. Zion’s top sellers are the mild flavored Jamaican Lager and the super smooth Bohemian Pilsner.

I was most impressed with Zion’s foray into kettle-soured ale. You don’t see a lot of brewers (especially in Utah) taking the time to do sours, but Jeremy does. He first brewed a sour pomegranate (cleverly called Foray), then moved on to a sour peach ale made with local Sterling Farms peaches. Since he’s an overachiever, Jeremy literally hand-picked cactus fruit from a neighborhood hillside and brewed a sour prickly pear beer from the harvest. Currently the brewery is pouring a passionfruit sour, soon to give way to a sour cherry in late May or early June. 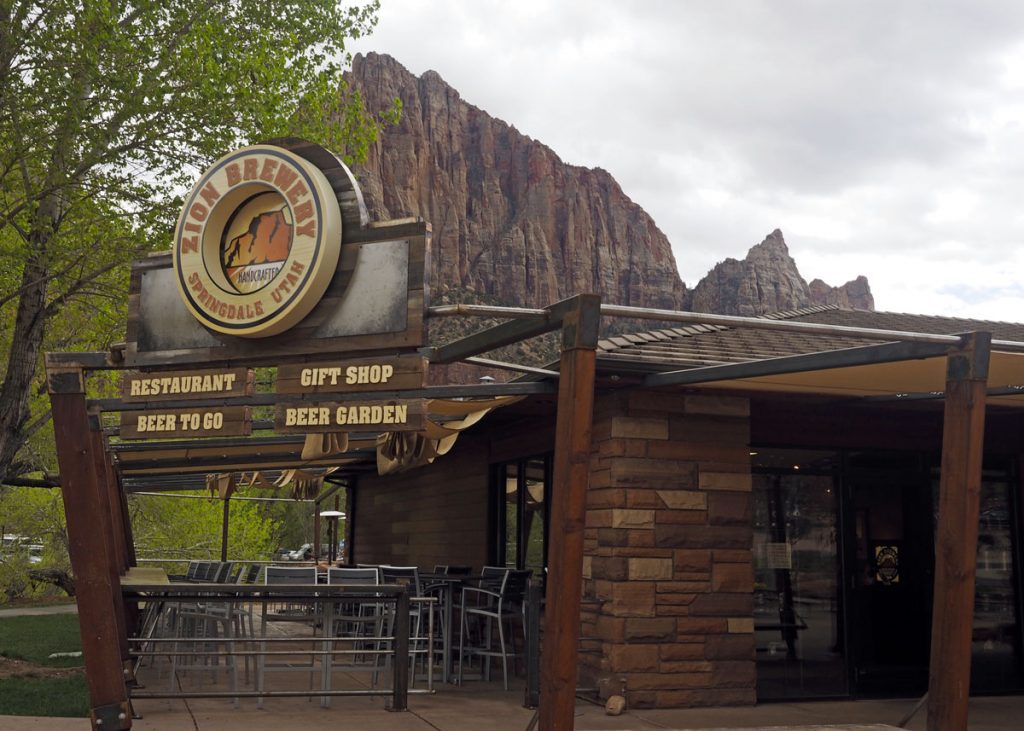 That brings me to one of the coolest things about the new incarnation of Zion Brewery: the brewpub! With the new ownership came an absolutely prime location for such an establishment. Mere steps from the bustling south entrance of Zion National Park, in the shadow of the park’s picturesque sandstone cliffs, the brewpub boasts a roomy riverside patio and a menu full of items that incorporate the beer they serve. The adjacent merchandise shop fills growlers to-go while offering an array of Stanley branded pint glasses and thermoses perfect for camping and hiking with fresh beer from Zion Brewery. Even the Zion Lodge (inside the park) pours lodge-branded versions of Zion Brewery’s Echo Canyon IPA and Jamaican Lager.

I couldn’t be more excited to report that the Zion Brewery is alive and well in Springdale, Utah. Lord knows we have too few craft breweries in this state outside of the capital city. There are only two in Southern Utah (Zion Brewery and Moab Brewery), but hey, I’ll take ‘em! I love to escape to the amazing wide-open desert destinations in the southern half of our beautiful state, and thank the Beer Gods, I won’t go thirsty while doing it.

Check our Facebook Page for a full photo gallery.