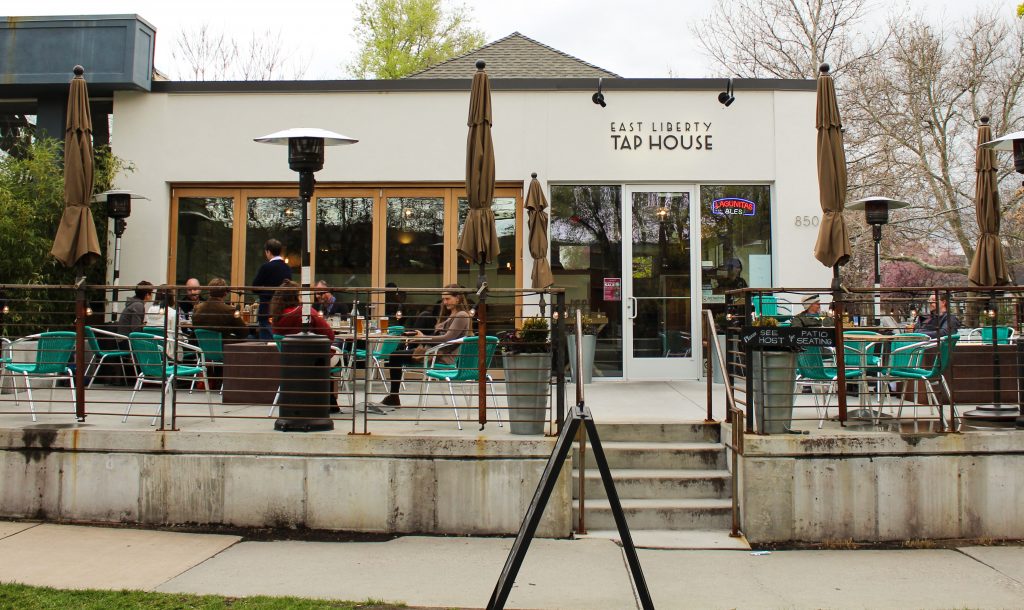 The vibrant huddle of shops and restaurants at the 900S 900E section of Salt Lake City, UT has long been the hub of excitement bisecting the bustle of downtown Salt Lake and the commotion of Sugarhouse. When I first moved to Salt Lake three years ago, I would frequent 9th and 9th for coffee and burritos, all the while feeling there was something missing. The heart of communities over the course of centuries and across cultures has been the place of shared drink – a tavern, pub, bar, or in this case, East Liberty Tap House. 9th and 9th was made whole when it was given this neighborhood hangout in December of 2014. 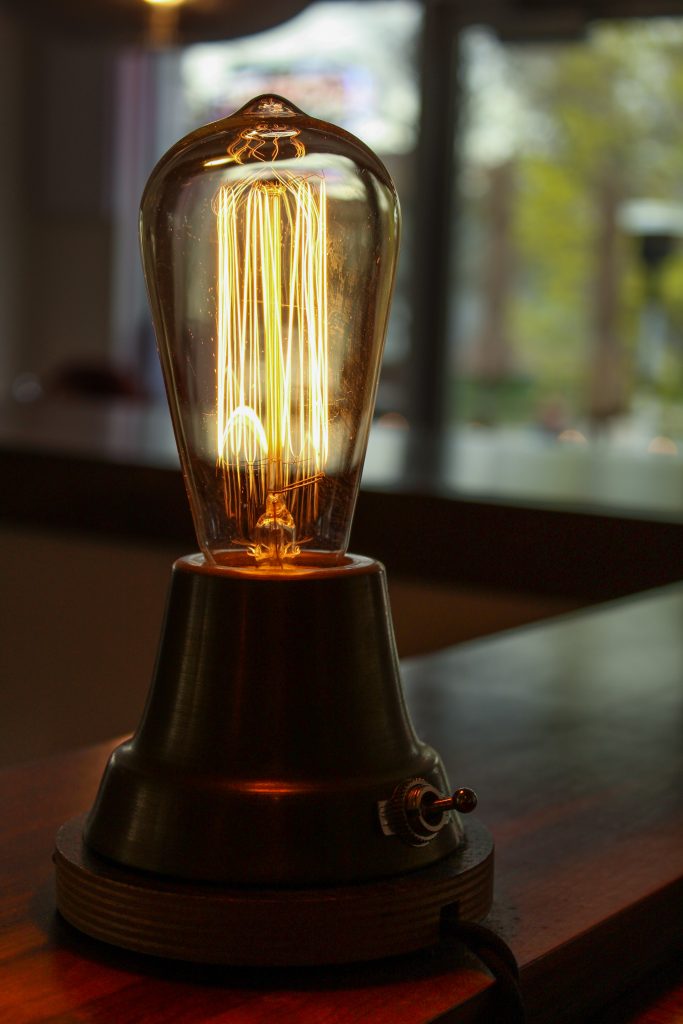 The interior is simply decorated with a less-is-more Danish influence. Birds seem to be the main theme, adorning the walls in the form of prints, posters, mirrors, and modern art. Edison bulbs line the space dividing walls and hip cardboard lamp shades hug ceiling fixtures to keep the space lit and inviting. I particularly enjoy the massive front windows that can slide open to create free flowing space between the indoor and outdoor seating.

Weather permitting, the patio is open Spring through Fall. It’s not uncommon to see dogs basking in the space between the elevated patio and sidewalk while their owners enjoy light conversation and flasks of draught beer. Perhaps the most impressive facet of the patio is that it more than doubles ELTH’s seating capacity from 40 to a max of 100. This increase in capacity is easily met with additional serving staff, but the tiny kitchen has no room for anything less than the most skilled culinary artists. 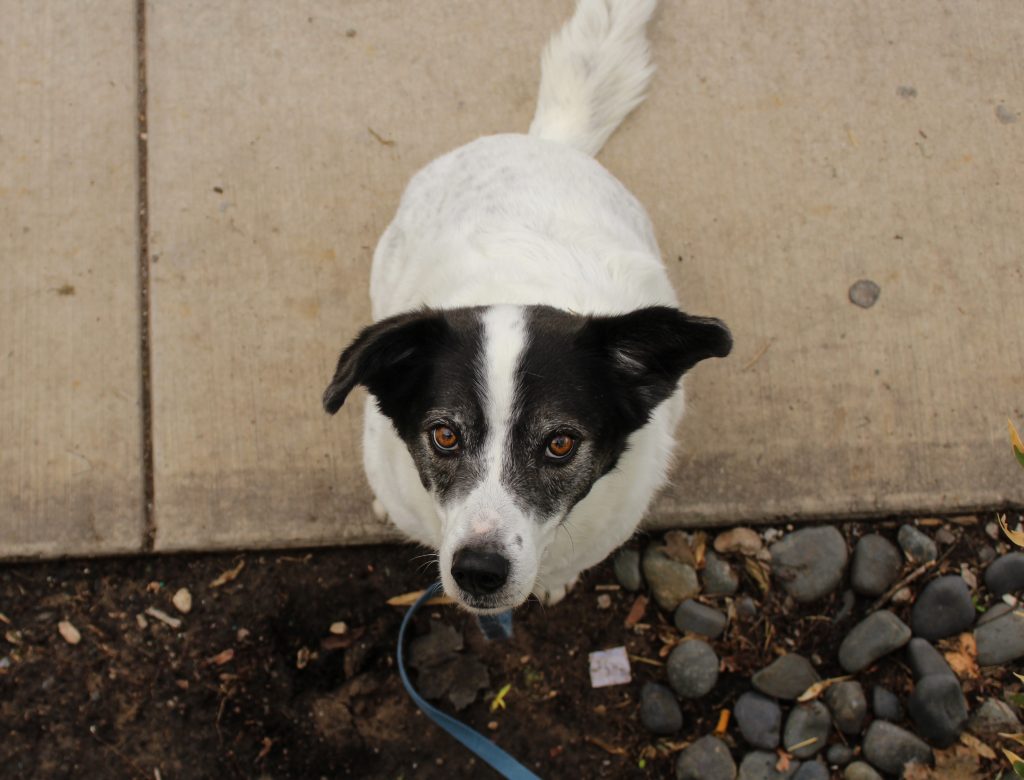 Head Chef Troy Thomas manages the crew and menu in the pint sized kitchen, pumping out 100+ burgers on busy days. Such a tight space and high volume of guests requires an equally tight relationship between the back and front of house staff, which is exactly what has been achieved. Bar Manager Tracy Gomez stated it’s the best kitchen she has ever worked with. As a seasoned industry worker myself, I know that’s not something everyone can say with confidence.

The menu at East Liberty Tap House can best be described as classy bar food made with locally sourced ingredients and a hint of Mexican influence. Simple snacks like the Queso Dip and Crispy Pork Lettuce Wraps are offered for the peckish, while larger plates of Smoked Trout Tacos or the vegetarian Sloppy Shrooms Sandwich are sure to fill you up for the afternoon. Amazingly, almost every item on the menu can be made gluten free upon request, as their kitchen is equipped with a dedicated gluten free fryer. Celiacs rejoice! 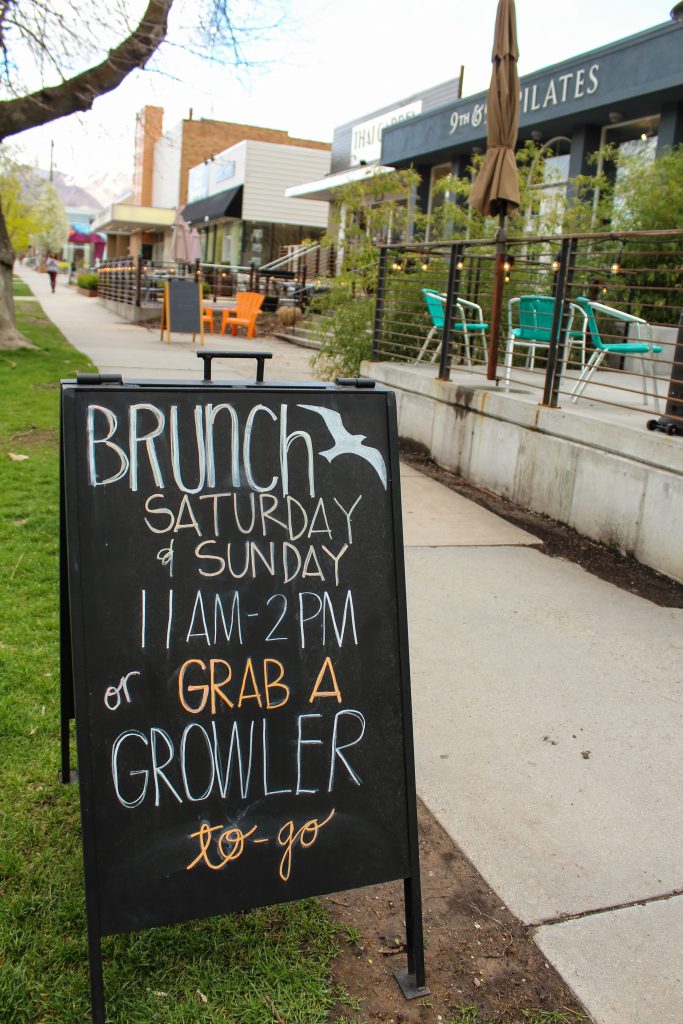 To complement their menu of tasty fare, ELTH has a fully stocked bar including spirits, beer, wine, and cider from local craft businesses. But before we talk booze, we have to talk licenses. Utah is the land of strange alcohol restrictions, but some licenses can loosen the government’s tight grip on the bottle. ELTH currently holds a Dining Club License, which allows service of alcohol on premise so long as it “maintains at least 60% of its sales from food along with dining facilities”. This license also allows for the sale of alcohol from 10:00AM to 1:00AM, and does not require ELTH to uphold the “intent to dine” rule that Restaurant License owners must follow. That means you’re free to enjoy mimosas on the patio on Saturday morning without committing to any snacks or meals. 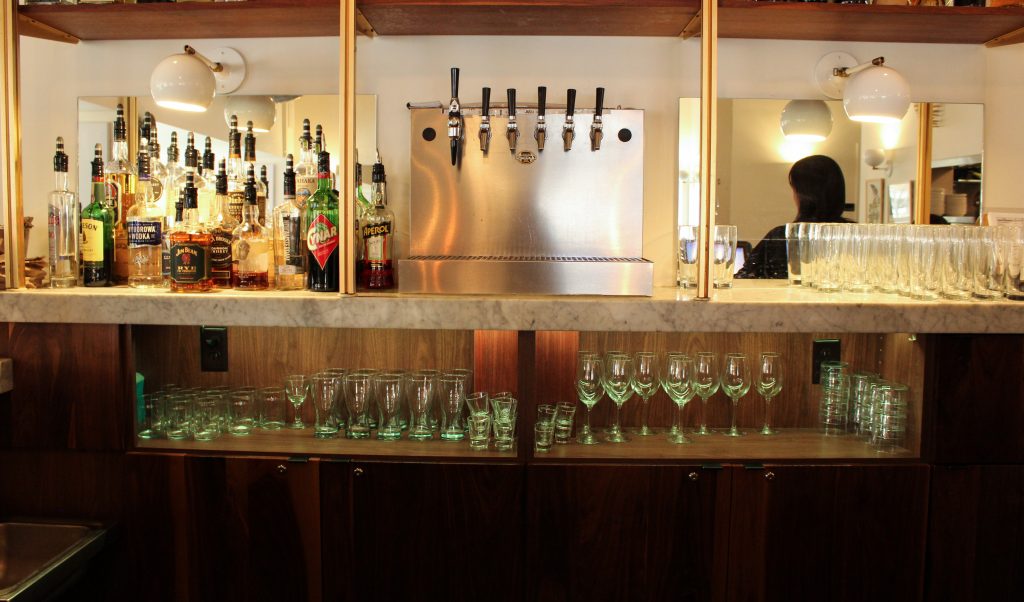 Back to the booze! ELTH’s alcohol selection is sourced from the growing pool of local beverage crafters, as well as specially ordered beer, wine, cider, and liquor normally unavailable to the Utah public. Look for unique Belgian beer options like the effervescent Tripel Karmeliet, among others. ELTH also has six taps featuring a rotating selection of local beer. Ask for a flask of draught beer if you’re sharing with a friend or especially thirsty. 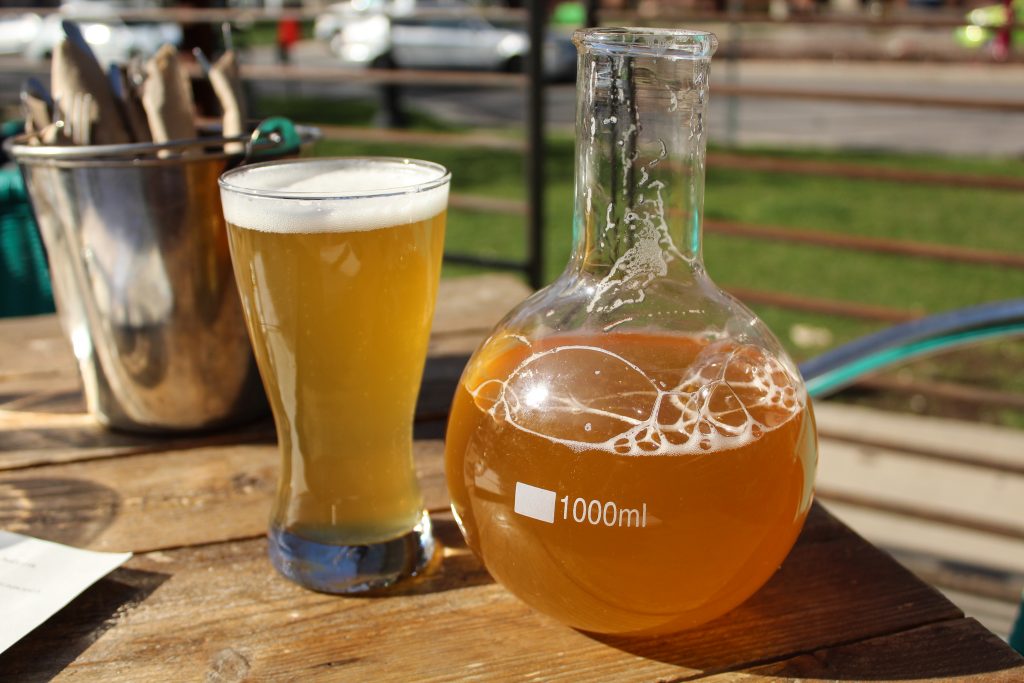 When I asked General Manager Kassie Monson what she wanted the public to know about their alcohol list, hard cider was a topic of interest. Their larger than average cider selection was chosen to display the dry side of fermented apple juice. While many see cider as a sugary option, Samuel Smith’s Organic Cider or local Mountain West Hard Cider’s Cottonwood Cider will show you cider can shine without a syrupy dose of fructose. As a gap in Salt Lake’s alcohol offerings, I suspect the supply and demand for cider options will be growing in the future, possibly thanks to advocates like ELTH.

Though the extensive list of beer and cider have something to offer even the pickiest of palates, the house cocktail list and wine selection are not to be outshined. If your preference leans more toward wine, you’ll find an ample list of reds and whites by the glass or bottle. I sipped on a Division Bell cocktail made with mezcal, aperol, luxardo, and lime as I munched on the Roasted Garlic Hummus. The smokiness of the mezcal heightened the spice and herbal qualities of the hummus dish, making it an excellent pairing suggested by the bartender. Also try the ELTH Sour, a bourbon cocktail that utilizes aquafaba (chickpea liquid) in place of egg whites for a vegan friendly spin on a classic.

East Liberty Tap House is the third installment of what is now five sister restaurants that pepper the Salt Lake valley. ELTH joined Pago at 9th and 9th, while Finca, Hub & Spoke Diner, and Trestle Tavern are all located within 5 miles of one another. Each features its own independent style and theme while maintaining the same commitment to quality food and drink.

Of it’s sisters, ELTH stands out as the neighborhood haunt. The majority of guests are locals gathering to chat over a fine beverage and bite to eat. 9th and 9th has gained a sense of community through ELTH that didn’t exist before. Stop by to relax on the patio for a couple beers and I think you’ll see what I mean. 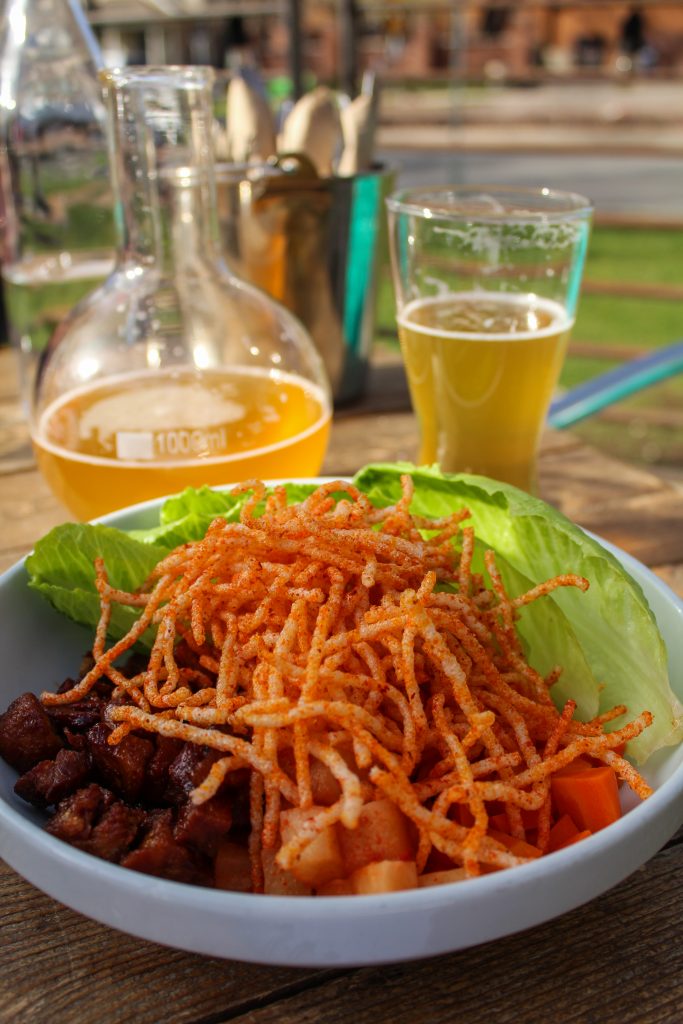