The holidays are an excellent excuse to get holly jolly with friends and loved ones. As much as I love a good reason to raise a glass full of the frothy stuff, there are some beers that give cause for a holiday all their own. Some of these are seasonally appropriate, and some of these are simply the unsung heroes of the liquor store shelves – the ones that might collect dust or be considered commonplace enough to forego. Be it a legit holiday ale or a solid standby, these are beers worth celebrating. 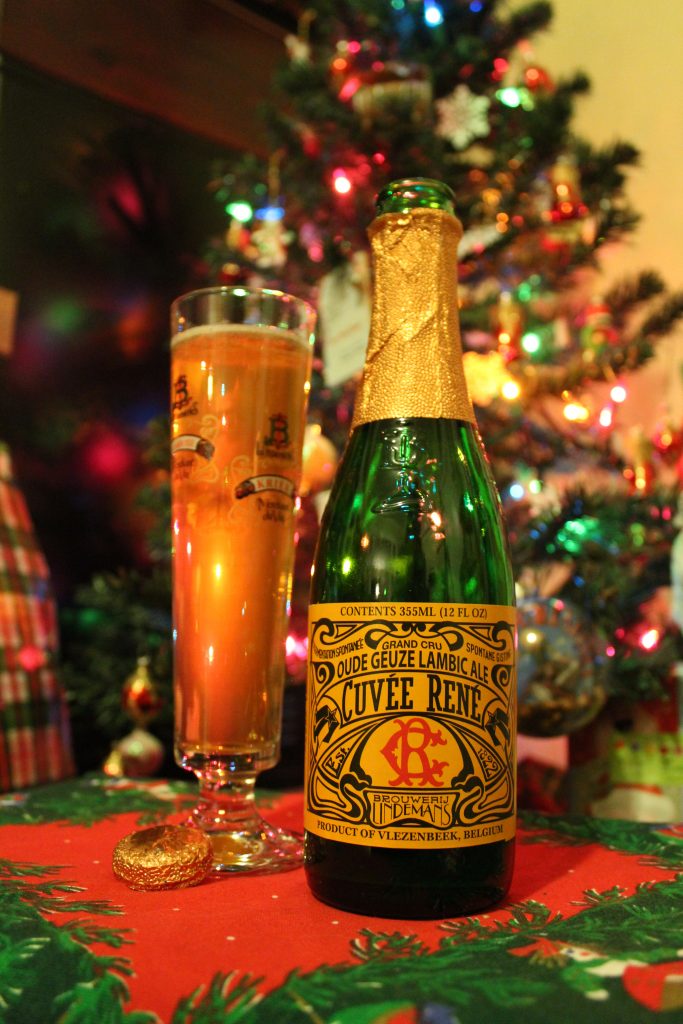 Most people know Lindemans by their syrupy sweet fruited lambics found almost everywhere. While they’re great for blending with other beers (think Framboise and Hoegaarden), I find it difficult to get through an entire bottle by myself. As such, the Lindemans brand is something I typically forego… with one exception.

All of Lindemans offerings are spontaneously fermented by wild yeast, but Cuvée René is the only unsweetened blend of young and old lambic beer that Lindemans offers in the States. The resulting beer falls under the style of gueuze (pronounced “GOO-zuh” or “GER-zuh” depending on nationality), and is the singular gueuze option available on Utah liquor store shelves!

Distribution aside, the beer itself is a downright delight. It pours golden in color with quickly dissipating foam. The aroma is of dried hay, stone fruit, and tart funk. First time drinkers probably won’t be ready for the pucker this one packs! Sour apple jolly ranchers, bleu cheese, and sourdough wash over the tongue along with prickly carbonation. It takes a few sips for your mouth to accept the high acidity, but it’s worth it!

***Words for the Wise*** This bottle requires a bottle opener AND a wine opener! Yes, it’s capped and corked. Don’t try any of that open-a-bottle-of-wine-with-a-shoe shit, or you’ll wear your beer instead of drink it. Not only do you need a wine key, but the cork almost always breaks on me while trying to pull it out. You’ve been warned! Again, it’s worth it. 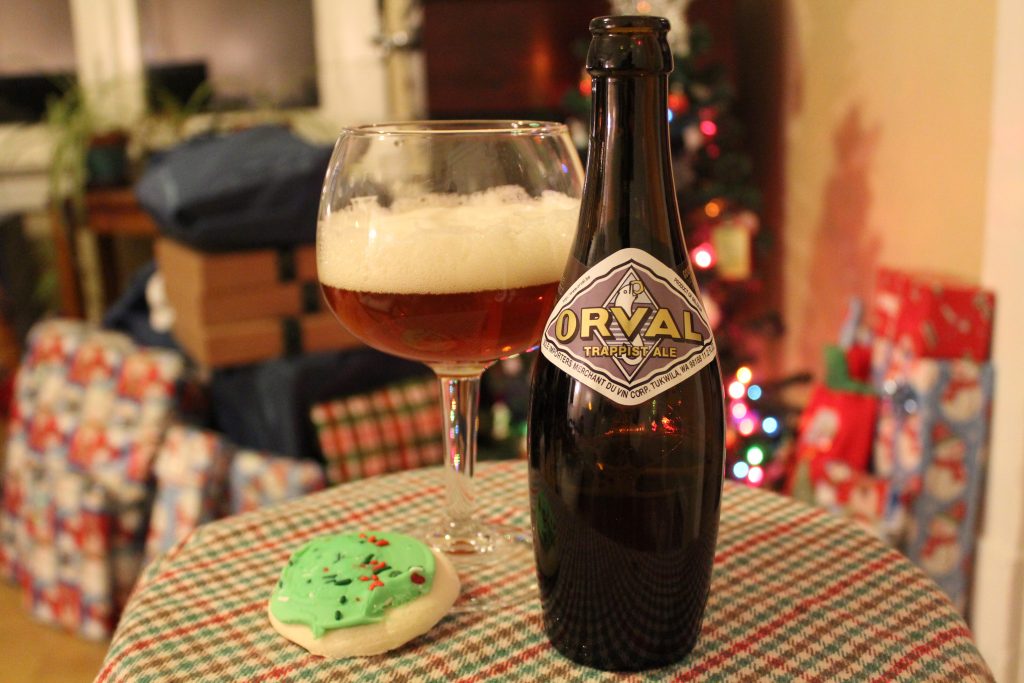 Orval is a Trappist brewery located in the Gaume region of Belgium. If you haven’t been made aware of just how special Trappist beer is, you should check out my post, 5 Interesting Facts About Trappist Beer.

Everything about Orval is unique – from the skittle style bottle to their logo featuring a trout holding a ring in its mouth. Legend has it, a widow lost her wedding ring in a fountain, and after praying to the Lord, a trout emerged with the lost ring. Out of gratitude, the widow decided to establish a monastery on the site of the fountain. Boom! A legendary beer was born.

Like Cuvée René, Orval ages very well, and can be cellared for years. The ability to age gracefully allows Orval to taste a little different from bottle to bottle. This particular bottle gives off aromas of toasted bread, mild funk, and pine. Flavors are tangy with hints of caramel, bread crust, and bay leaf. A strong effervescence is present, but less so than the Cuvée. Pair this with an apple chutney pork chop and you’ve got yourself a damn fine festivus! 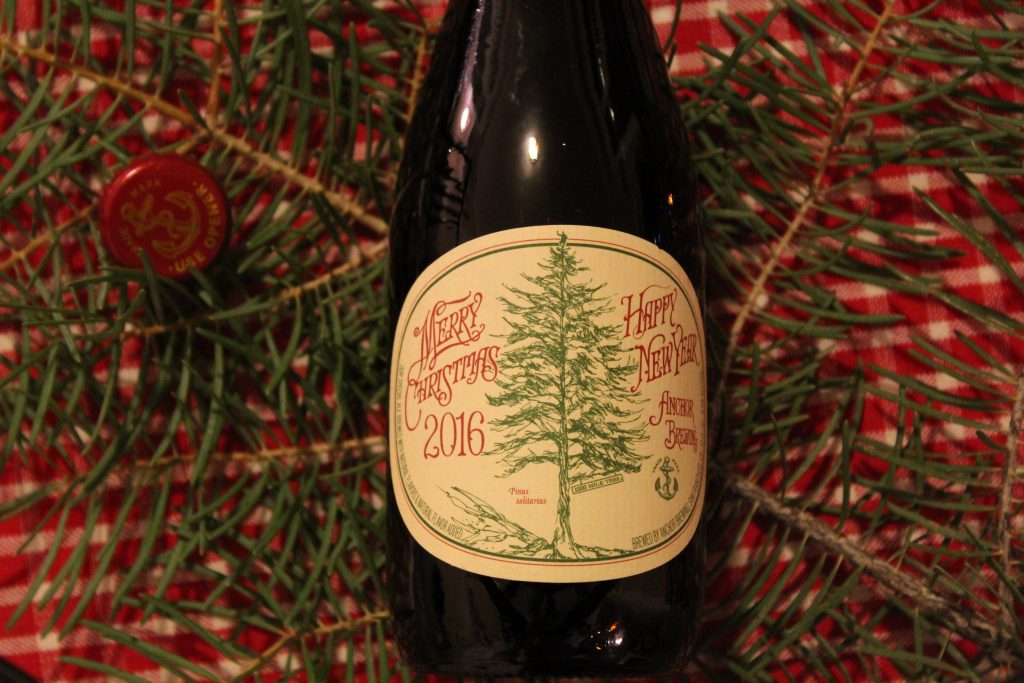 The holidays are lush with tradition, and beer is not immune! Anchor has been releasing their Christmas Ale every year since 1975. Each vintage displays a different tree on the label and is made using a different recipe. The same artist, James Stitt, has been designing these labels since their inception. This year’s vintage depicts the “1,000 Mile Tree”. It was a lone pine discovered in the middle of nowhere during the construction of the transcontinental railroad. I love drinking history!

Most people look forward to certain things during the holidays – visiting with family, sipping on eggnog, or experiencing the latest Anchor Christmas Ale. Come late October, my eyes start scanning the beer shelves for that oval label covered in red and green. This year’s edition does not disappoint! It smells of toasted raisin bread, baking spices, and fresh walnuts. Crusty English muffins, fig, tobacco, and dried cherry rock around my palate with remarkable drinkability. I can’t wait for next year’s vintage! 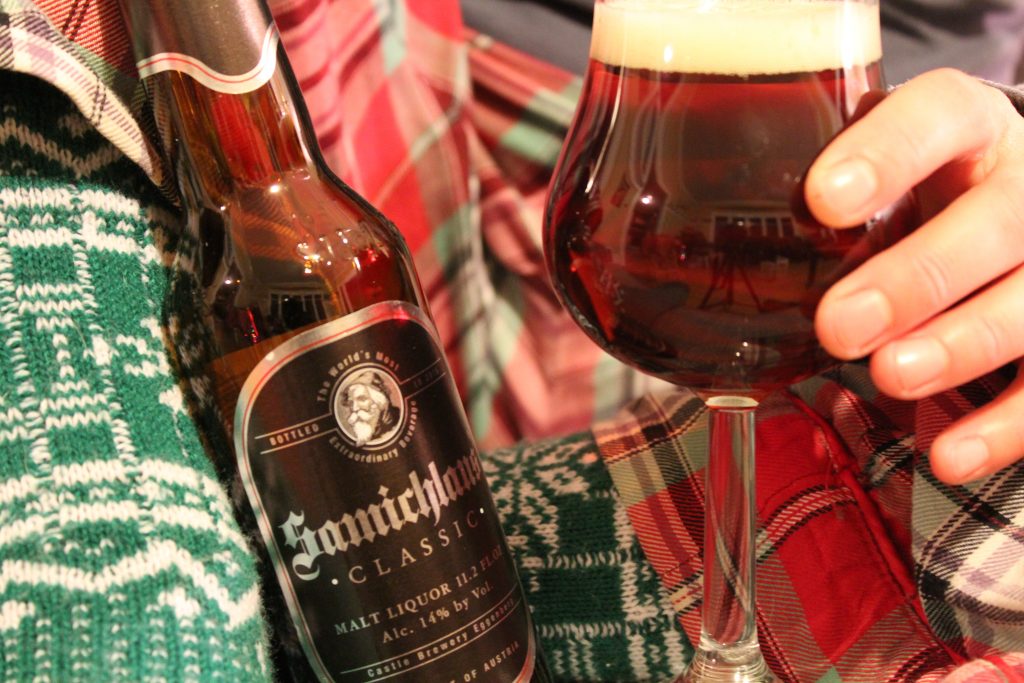 I’ll be honest. I had to look up if this even counts as “beer”. The label reads “malt liquor” and this bad boy rings in at 14% ABV, so I had to be sure. The internet assures me it’s a beer (so it must be true)! It’s technically a doppelbock lager. The specs on the label state this beer is only brewed once a year on December 6th, and then lagered for 10 months. It also claims “this beer is perhaps the rarest in the world.” I’ve seen it in Utah liquor stores nearly year round, so I’m not so sure of this claim’s accuracy. Maybe I’m in a tiny pond of rare beer and I don’t even know it? Nonetheless, it’s a unique beer that demands accolade.

If you haven’t already guessed, “Samichlaus” means Santa Claus, and by no coincidence. December 6th, the only day this beer is brewed, is St. Nicholas Day. I suppose nothing sells beer quite like connecting it to one of the world’s most popular drinking holidays!

Like the other beers listed here, this one fares very well with some cellaring. Any by some, I mean years and years. Throw this one in your basement and come back to it in a decade. I bet she’ll taste reaaaaal nice.

Rich caramel, pumpernickel bread, and dark fruit greet the nose. Equally bold intensities of alcohol and sweet fig newtons saturate my mouth on the first sip. Phew! It’s warming, but it doesn’t feel like 14% worth of warming (I’ll bet that comes later!). It has a slight tartness to it, but it’s mostly blueberries and black currant. Wow… store some of these away for a wintery day!

Merry Christmas and Happy Holidays, Everyone!