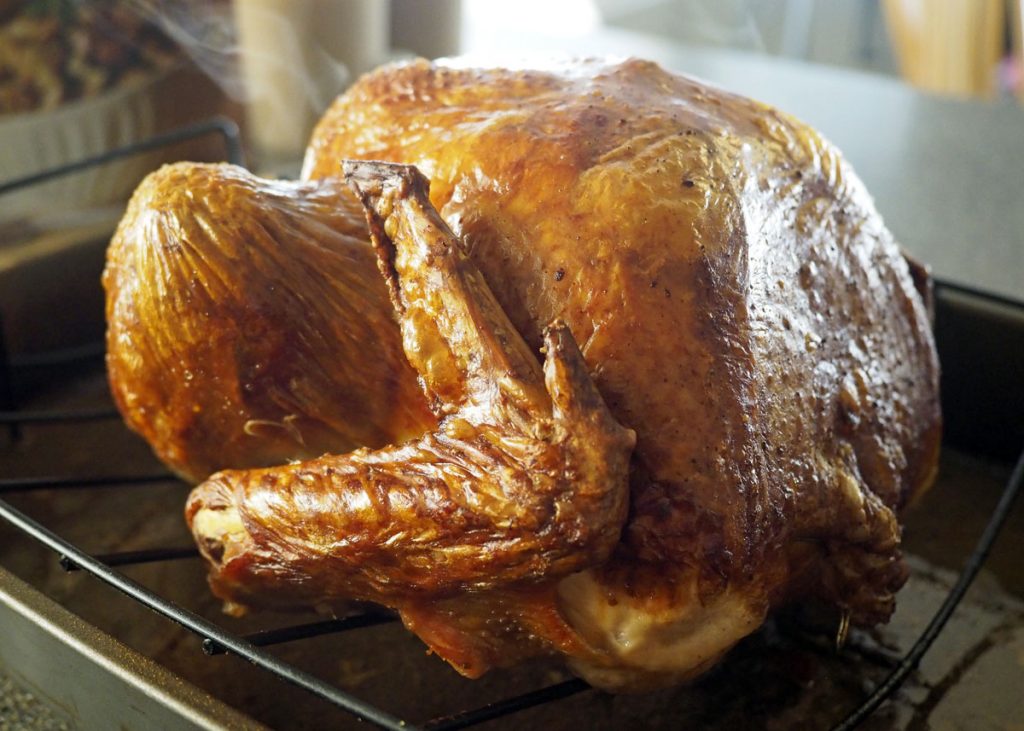 There’s nothing like a great roasted turkey during the Holidays! Food is what I look forward to most this time of year. Food…and beer! I’ve recently been trying my hand at cooking with beer. So when I saw this recipe for a brown ale-brined turkey in my copy of The Craft Beer Cookbook, I knew I had to try it.

I didn’t think I’d be trying it so soon. I haven’t made a turkey in years! I’ve also never brined one. I thought, maybe, I’d plan to do it next year. Then my family started planning Thanksgiving dinner and I opened my big mouth. Most of them are Mormon and don’t drink, and I wasn’t sure if they’d be open to a beer soaked turkey, so I thought I’d feel them out. I made assurances that all of the alcohol would be cooked out, of course. They all loved the idea and so I was officially nominated. Yikes! There is a lot of pressure on the person whose job it is to make the turkey. Don’t screw it up!

Beer is a very effective meat tenderizer, which makes it a perfect ingredient for your brine. It will also add flavor to the meat. Combined with the moisture that brining your turkey will add to your final result, it’s really a must! This recipe could become a tradition, assuming I can pull it off. It promises a juicy bird with crispy skin, and slight notes of malt. Yes! 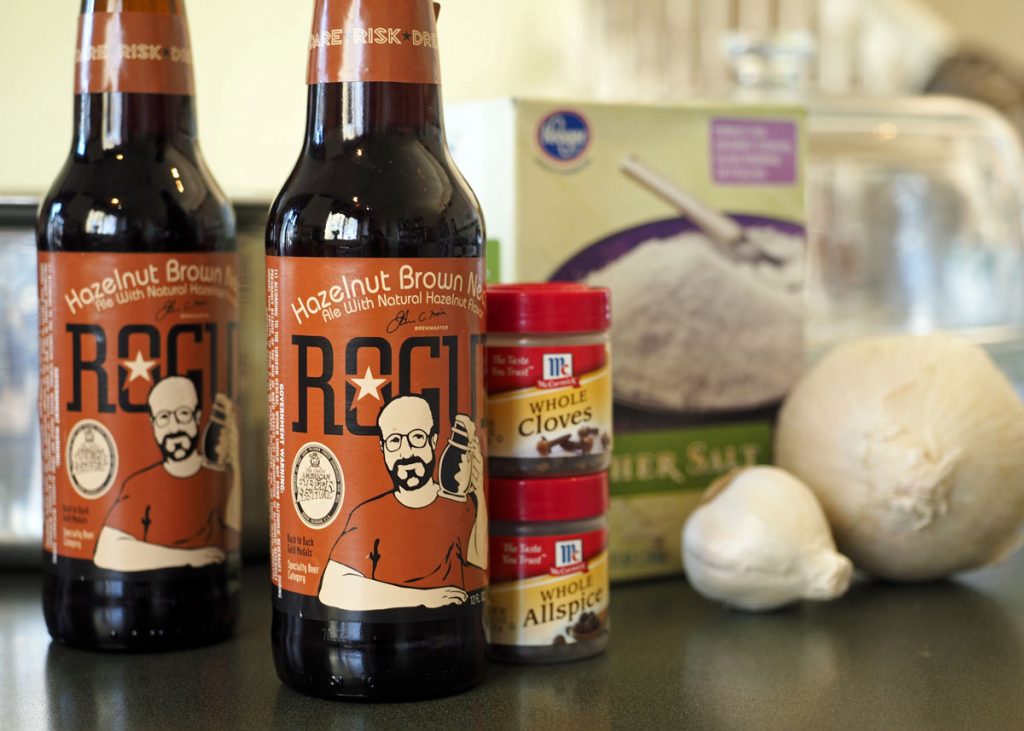 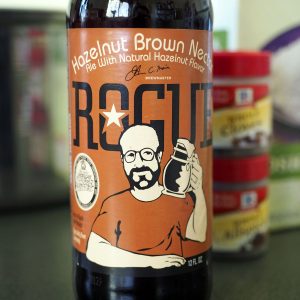 The recipe suggests a rich, nutty brown ale. If you can find one with notes of spices, even better! Stay away from ales with lots of hops as they could leave a bitter taste. I went with Rogue Hazelnut Brown Nectar. Samuel Smith’s Nut Brown would be another good choice.

Thaw your turkey (a few days in the fridge) and have it ready to be brined a couple of days before you plan to eat it. This recipe suggests leaving the turkey in the brine for 16-18 hours. After brining, you will dry your turkey for 12-18 hours to give you that crispy skin. One thing I learned is that you can brine a turkey too long. Especially if the salt content in your brine is rather high, the meat could end up on the salty side. The mass (weight) of your turkey matters as well. I don’t recommend exceeding 18 hours with this recipe, and stay closer to 16 if it’s on the small side. If your turkey is over 18 pounds, double the brine recipe. 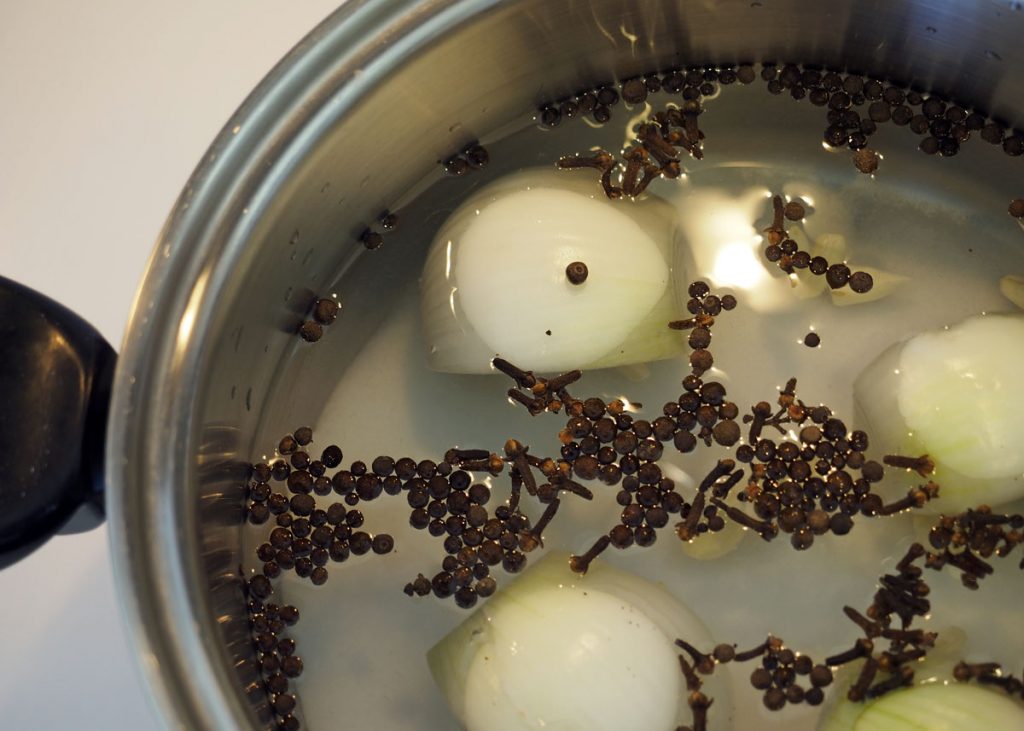 In a large pot, add water, salt, garlic, allspice, cloves, and one of the onions. Heat the water just to boiling and remove it from the heat. Stir to dissolve the salt. Then, add the beer and ice, stir, and cool to room temperature. To avoid allowing bacteria to grow, do not put your turkey into the brine while it’s still too hot. Refrigerate the brine if you need to. Safety first! 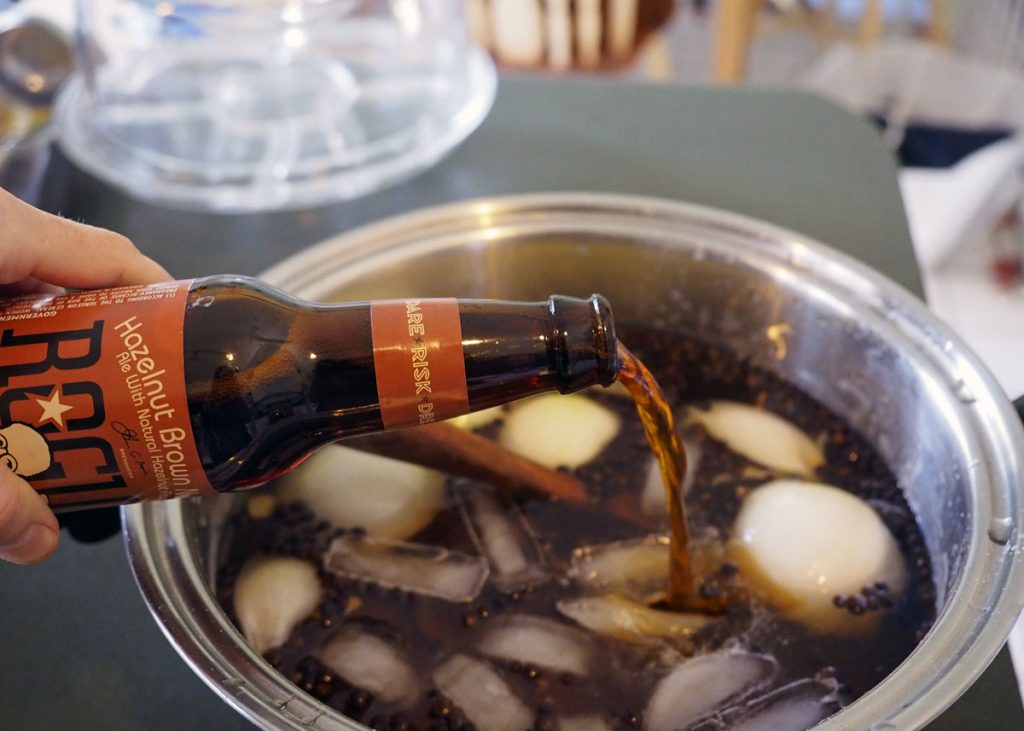 I admit this part grossed me out a bit at first. Rinse the dead, naked bird and remove any items from inside the cavity. There are two cavities actually, so don’t forget to check them both. You might want to save the turkey neck and giblets for making gravy. Or if you’re like me, get them out of your sight ASAP! Remember how good it’s going to taste and picture what a wonderful centerpiece it will eventually make.

The recipe instructs you to double bag the turkey with the two oven bags, pour the brine over the turkey, and then close it up tightly removing as much air as possible from inside. This is not as easy as it sounds. I had a difficult time getting the bags to seal. Flimsy twist ties don’t do the trick. I saw a turkey brining bag at Harmons and wished I’d bought it. It had a self-sealing mechanism that may have helped. I eventually found something sturdy enough, but not before I suffered a leak or two. 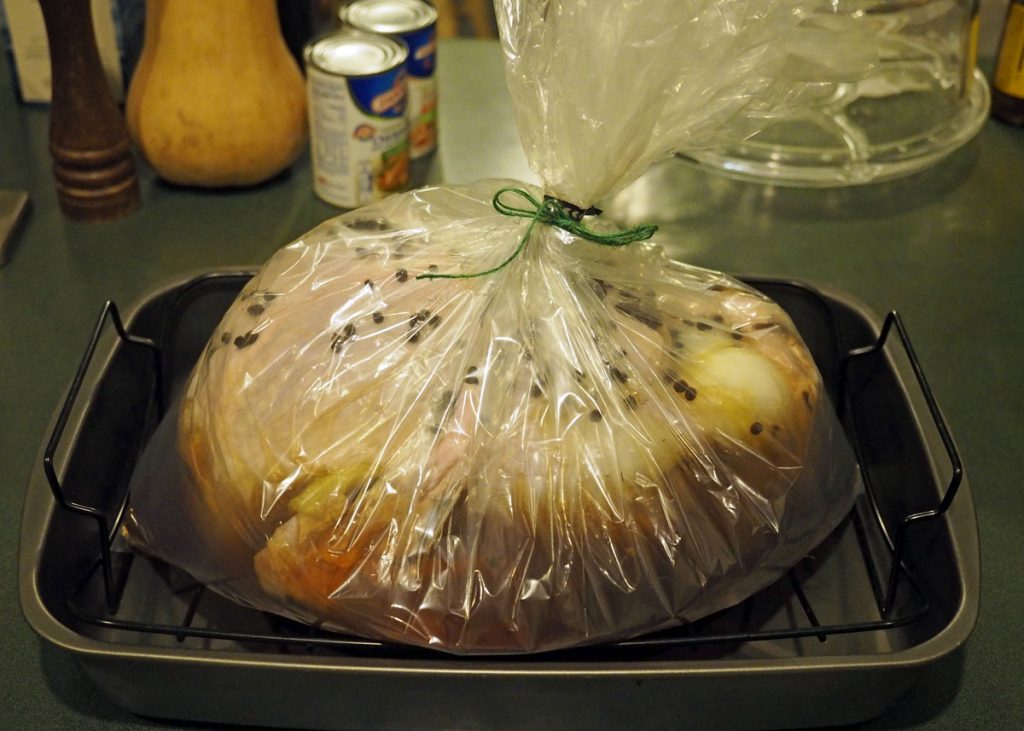 Place the turkey on the rack in the roasting pan inside your refrigerator for 16-18 hours. Throughout the brining process, you need to turn the turkey every 6-8 hours so it marinates evenly. If space is an issue, try using a cooler, but be sure to keep it cold. When you’re done brining the turkey, rinse it thoroughly (inside and out) and discard the brine and bags. Then, place it back on the rack inside the refrigerator, uncovered for 12-18 hours to dry the skin.

Preheat oven to 400°F. This is on the high side for a turkey, so be aware and don’t overcook. Stuff the remaining quartered onion and the celery inside the cavity of the bird. Brush the entire turkey with olive oil and sprinkle with salt. If you’re using a shaker, don’t shake directly onto the turkey. Put the salt in the palm of your hand and use your fingers to carefully salt the turkey. It doesn’t take much. 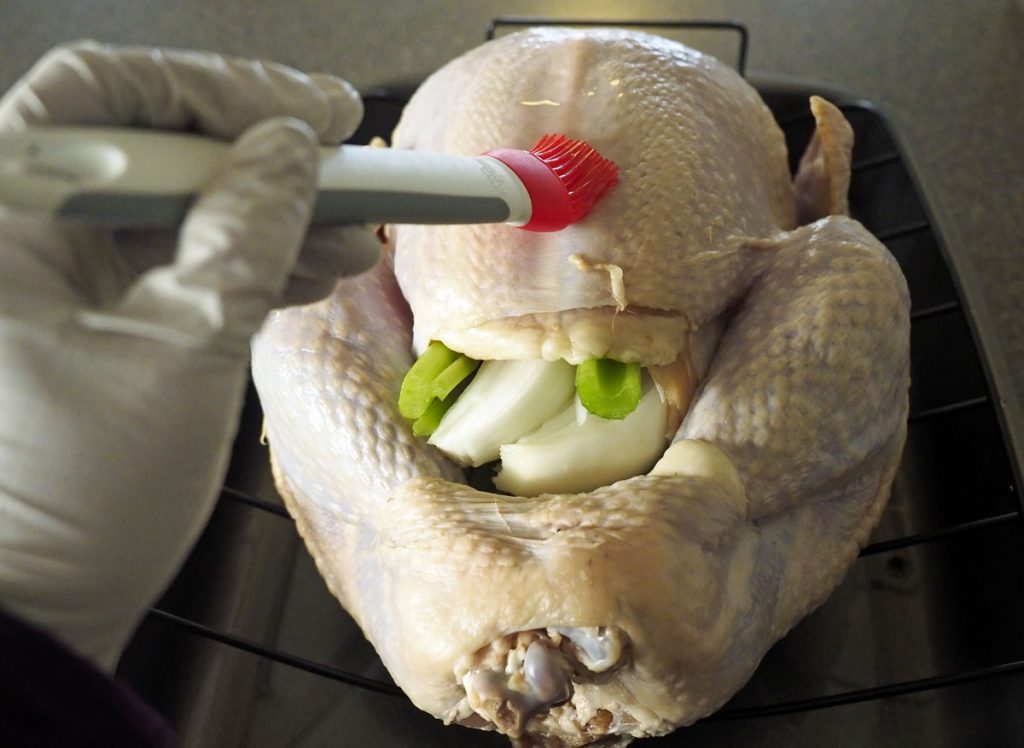 Add the broth to the bottom of the roasting pan. If the pan dries out, add more water, but don’t let it touch the turkey. Cook until the turkey reaches approximately 165°F. Test it by inserting a meat thermometer into the thickest part of the thigh. Let it rest for 10 minutes before carving. 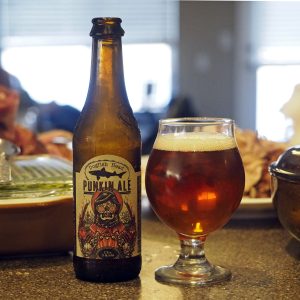 My turkey wasn’t a disaster. Phew! I hope to perfect my abilities as turkeymaker for future attempts. It was certainly juicy and had some wonderful aromas and flavors. I paired it with Dogfish Head Punkin Ale which was fantastic! If you’ve never tried brining a turkey before, I endorse the practice wholeheartedly and I wouldn’t dream of doing it without beer. Try this at home and let us know how it turned out! Merry Christmas!