Wine and beer have long been considered polar opposites. One is considered a fancy sip for suit and tie occasions while the other, a cheap chug for blue collared workers. There has never been more evidence to disprove this idea than today, and never a place more suited for the task than Oregon. With bountiful breweries and a cozy wine valley all its own, Oregon allows the two worlds to exist harmoniously, tie optional. 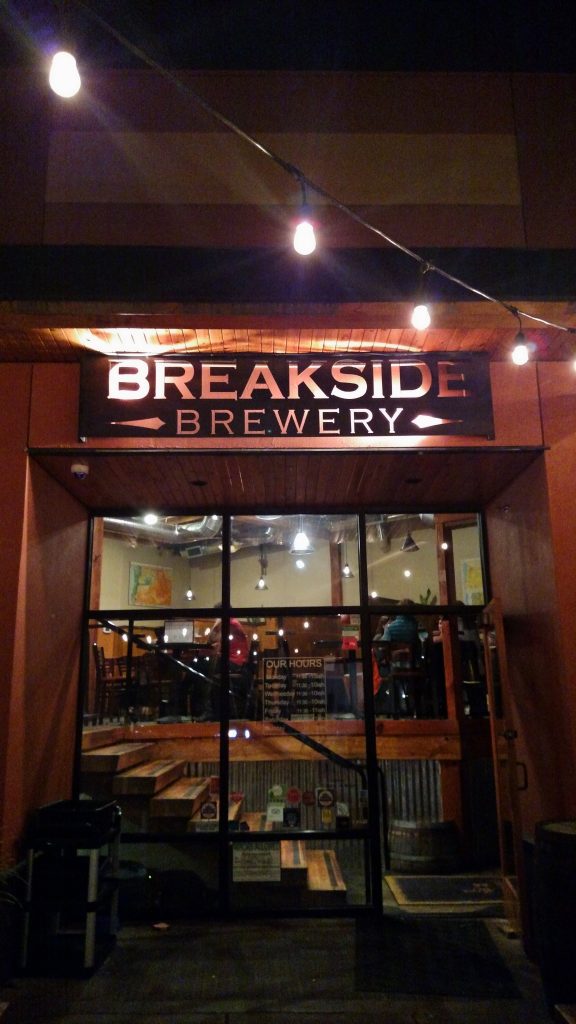 As I stepped into the pub, weary after a 12 hour drive from Salt Lake City, a strange nostalgia washed over me. I used to live in Portland, OR about five years ago. I was nowhere near beer nerd status at the time, and didn’t place much significance on the bars or breweries I visited. However, walking into this vibrant neighborhood haunt flooded my mind with memories. I had been here before! It was unexpected and delightful.

It’s small enough for an intimate conversation with a close friend, or big enough to accommodate a larger group. Even filled up on a Friday night, this place felt welcoming and uncrowded. Their beer selection offers classical styles, as well some that are more experimental. All are of the highest quality. They offer traditional pub fare that kills it, too. It’s all you could ask for in a neighborhood pub. 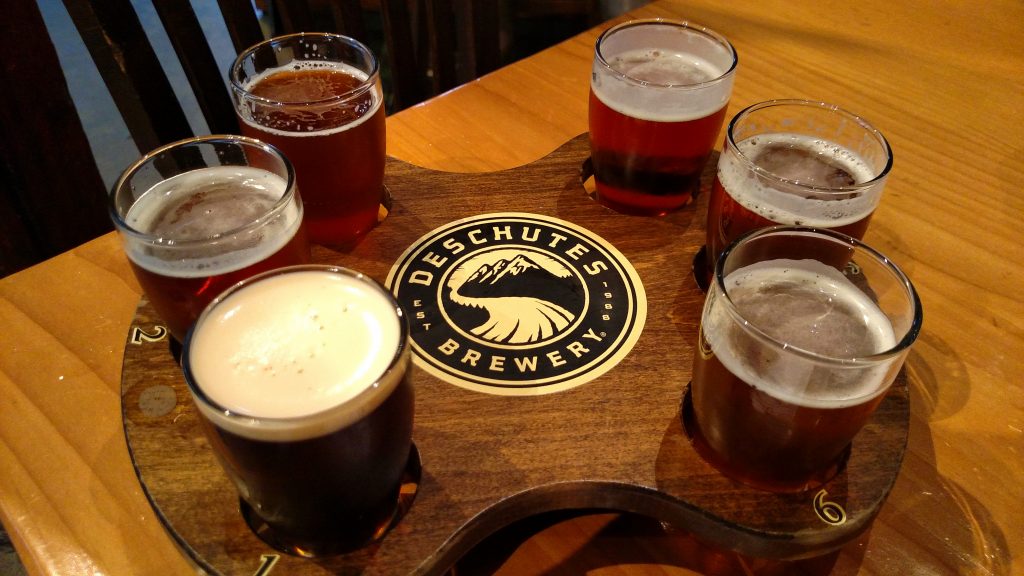 Big names often come with big price tags and long waits. If you plan on visiting Deschutes in the Pearl district of Portland, be prepared with your time and dollars. But rest assured your investment will be absolutely worth it! The beer menu is extensive, including rare cellar options and a couple cask conditioned favorites. If you’ve never had Mirror Pond Pale Ale on cask, there’s a little hole in your life that needs filling.

Don’t leave this place without ordering food. Their menu boasts locally made everything (as is the Portland custom). The brewery pretzel is divine, and the bacon and blue salad makes me actually want to eat salad. The hand carved dining hall frames depicting woodland animals and pine trees provide some eye-candy while you gorge yourself. Euphoria is imminent. 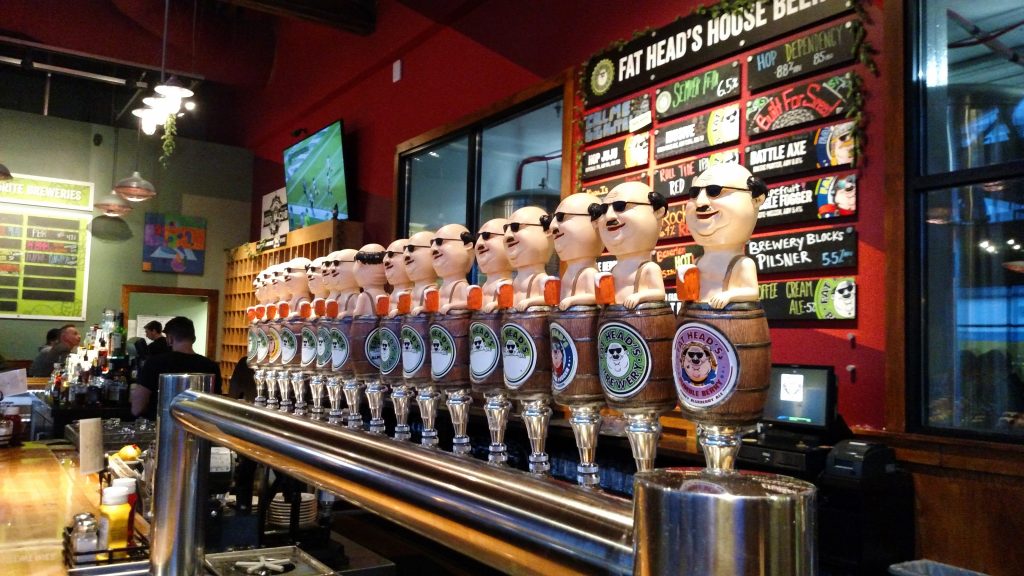 I’ve never seen so many fat… heads… in my life. Their tap towers look like a chorus of Peter Griffins that bobble back and forth as the bartenders poured beer after beer. Though it’s a bit of an odd sight, this brewery crushed it at the Great American Beer Festival, taking home five medals. It’s no coincidence! Their brews are all well above average.

The beer list is also very, very large. A myriad of IPAs, barrel-aged beers, and guest taps made it difficult to assemble a flight. This is the best kind of problem! From classic pilsner to pinot noir barrel-aged Belgian strong ale, every beer met my expectations. I didn’t try any food, but I’m willing to bet it’s of a similar standard. 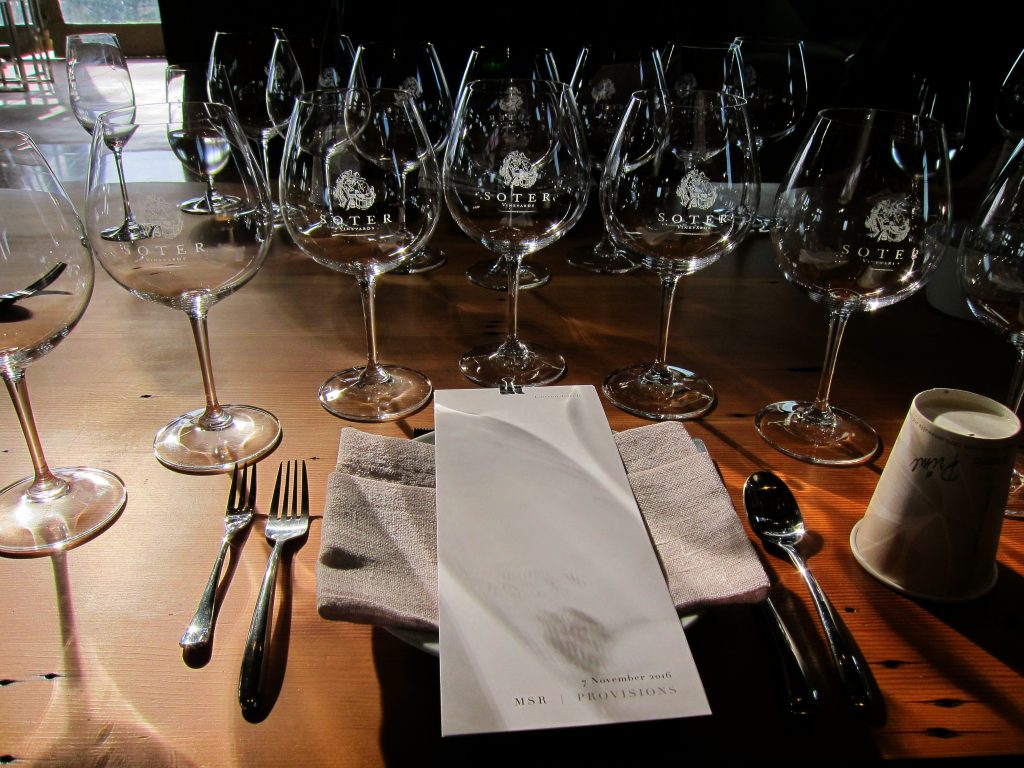 Before this trip, I had very limited experience with wineries. The expectations for my first vineyard experience were hopeful but limited. If I drank wine and learned a thing or two, I would have been a happy girl. It might have been better to save the best for last, but I couldn’t wait that long to tell you how charmed and wowed I was by my experience at Soter.

As we were exiting the car and walking toward the tasting room, we were welcomed by two happy vineyard dogs. Moments later, two smiling Soter representatives greeted us by name and gave us each a glass of Mineral Springs Brüt Rosé. Mind you, we had yet to step foot in the tasting room!

Inside, a giant table was laid out in front of the fireplace. Each place at the table had a personalized menu with our names on it. The Sommelier guiding us through the tasting was down to earth and extremely knowledgeable. The whole experience was akin to having lunch and wine at a good friend’s house that so happens to be in the middle of a vineyard. I simply cannot say enough good things about my visit. 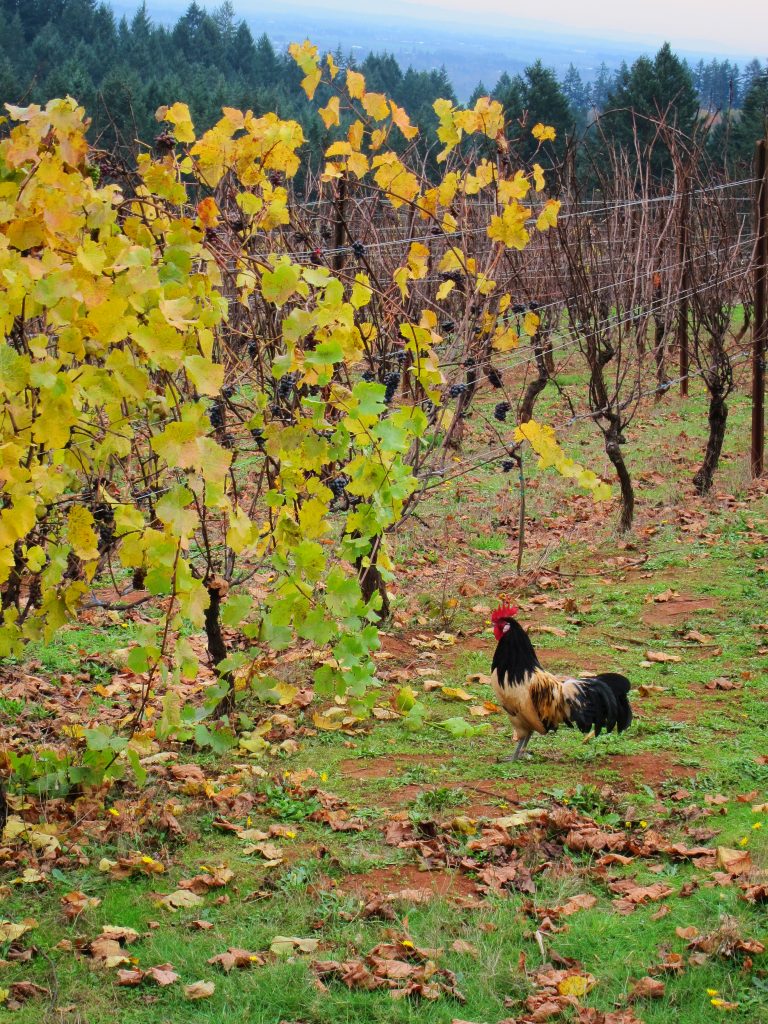 Lange is rooted in the volcanic soil of the Dundee Hills in the Willamette Valley. An excellent view of the valley with Mt. Hood on the horizon can be seen from the quaint tasting room. Jack the cat snuggled by the fire as we sipped our way through several of Lange’s finest offerings.

We learned about the effects of the soil and elevation on the grapes, and even got to taste some grapes from the vine. Fine cheeses, figs, and crackers were offered as we sampled, along with some local chocolate covered hazelnuts. It was a food pairing playground! 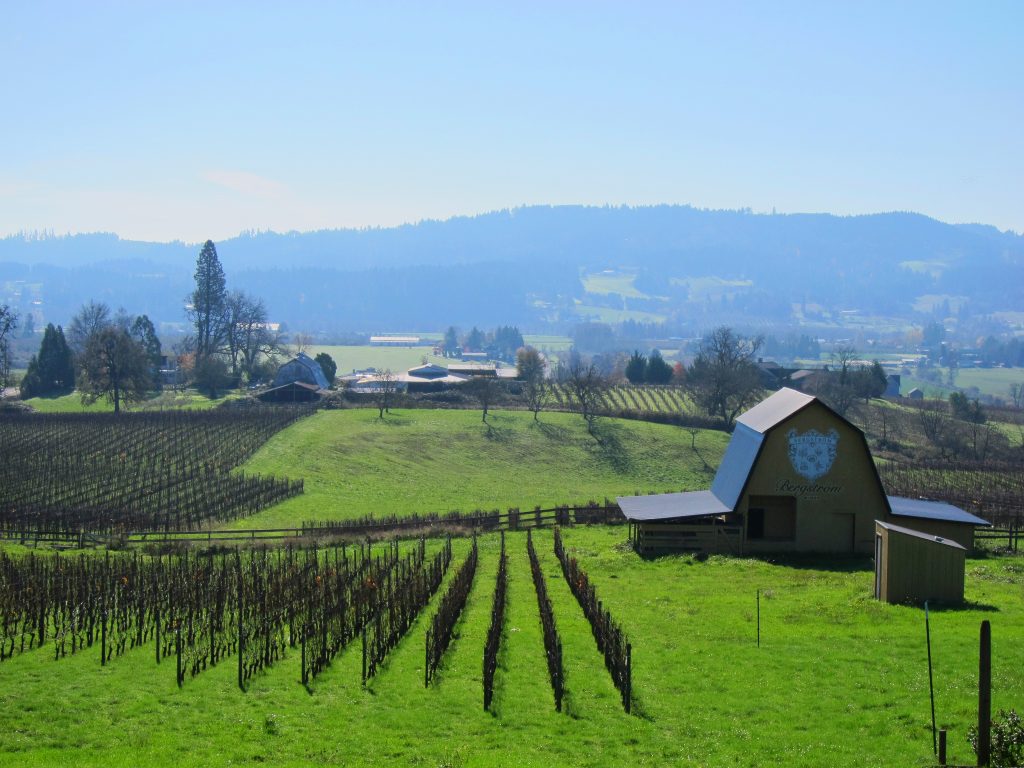 I began day number two of wine tasting a bit hungover and sleep deprived. On the car ride to Bergström, I gobbled down a badass breakfast from the Red Fox Bakery in McMinvillie – an excellent base for another day of drinking. The rarity of a balmy, sunny day in November made me realize life was pretty damn good.

Sitting on the patio, soaking in morning rays and the surrounding doesn’t-get-any-better-than-this scenery, I sipped and sampled my way through the tasting. It was composed mostly of pinot noir – Willamette Valley’s staple grape. We also had a couple chardonnays and a syrah that was quite nice.

It was the perfect morning. I would have liked to stay there all day, but there were more places to be and wines to drink. And flitting from one paradise to the next wasn’t all that bad. 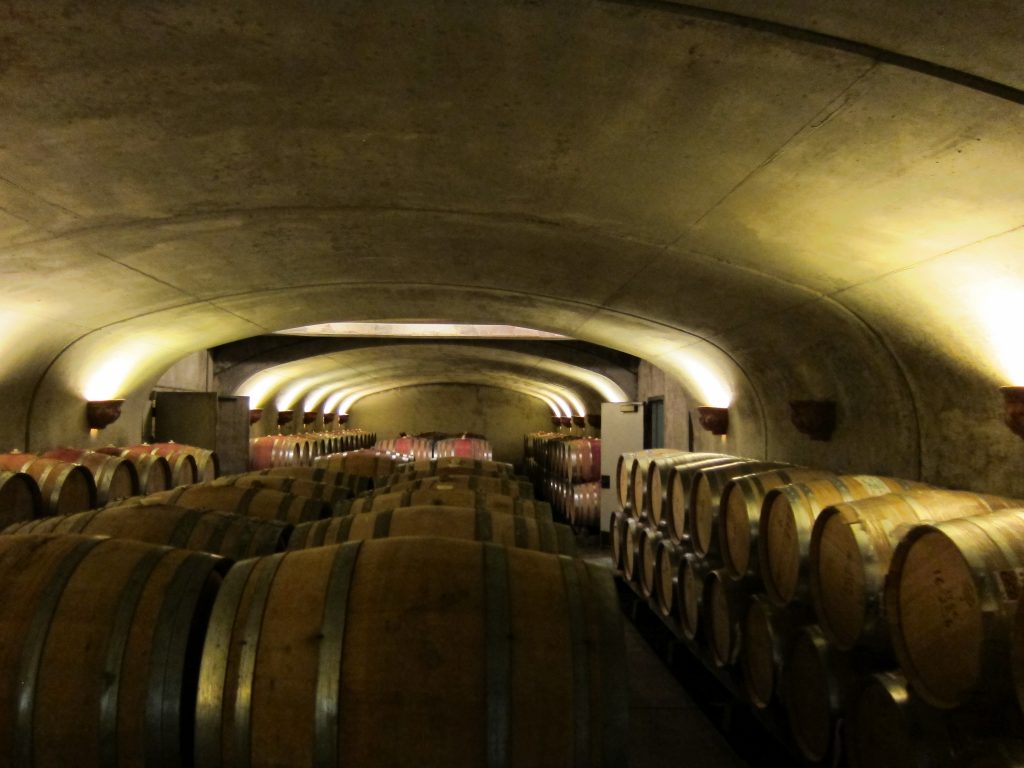 Pulling up to Adelsheim, I was pretty confident I knew what to expect. How very wrong I was! Sam Schmitt, Certified Wine Educator and Sommelier, gave us a thorough tour of the vineyards and winemaking process before tasting us through a wide selection of their wines. My favorite part of the tour was when we went down into the caves where the wine was stored in barrels. The aroma was dank, earthy, and almost mushroom-like.

The most exciting part of the tasting was the last two wines we sampled. Each bottle was made from the same grapes on the same hill, only one was from the top of the hill, and the other from the bottom. The difference in fruit character was the best example of terroir’s effect on flavor I’ve ever tasted.

The last stop on our trip was as unique as each stop before it. We started out in their small office, complete with two doggies that greeted us with much fanfare. After introductions and a walk through the kitchen/laboratory, we went out the back door and ended up in a massive forest of fermentors and holding tanks. The enormous size of this place became very apparent as we walked through a seemingly endless link of buildings filled with stainless steel and other wine equipment.

Union has experienced double growth for several years, and continues to grow exponentially. With the recent rise in popularity of canned beer, it’s no wonder canned wine is a hit! Good marketing and quality products are a winning team. They also have a traveling tasting room that spent three months putting its way across the states this past summer. Look for the Union Wine Company van to stop in Salt Lake City, UT sometime in the Summer of 2017!

Having visited many breweries in my life, I can say most are very similar with subtle differences. Wineries and vineyards, however, are a much different story. It seemed each place I visited had a different focus on how they made their wine. Some emphasized superstition while others strictly science. Whatever the practice and environment, it echoed through my experience and the wines we drank as something unique.

The unifying theme throughout the Willamette Valley was “what’s good for one is good for all”. I was impressed to hear how highly each vineyard spoke of the others. They’re very neighborly to one another, and though they’re obviously competing in the same market, are invested in each others success. I applaud the community and welcoming nature I experienced here.

Thank you Oregon for your hospitality and fine beverages!