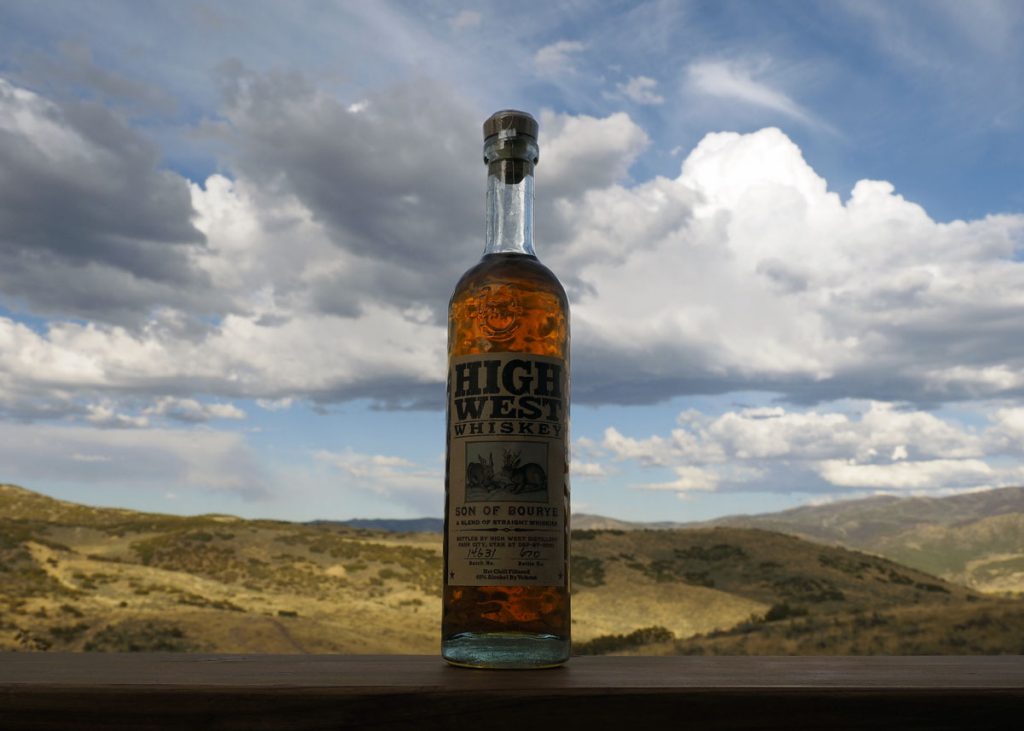 I haven’t always loved whiskey. In fact, I didn’t like it all that much until one winter night at a party when I succumbed to the peer pressure of a shot ski. It wasn’t bad at all! The shot glass was filled with a rye from High West Distillery; and so began my whiskey love affair.

High West can take credit for a lot of things, besides converting me to a whiskey drinker. Founded in 2007 by David and Jane Perkins, it became the first legal distillery to operate in Utah since 1870. This has opened the door to a multitude of Utah distilleries now making booze in the state. Recently, High West successfully lobbied the state government to change liquor laws to allow for an “educational tasting room.” In a designated area, distillery visitors can now have a flight of up to five ½ oz. whiskey pours in front of them (instead of just two). They also happen to make some damn good whiskey, and it’s not just the locals who think so. 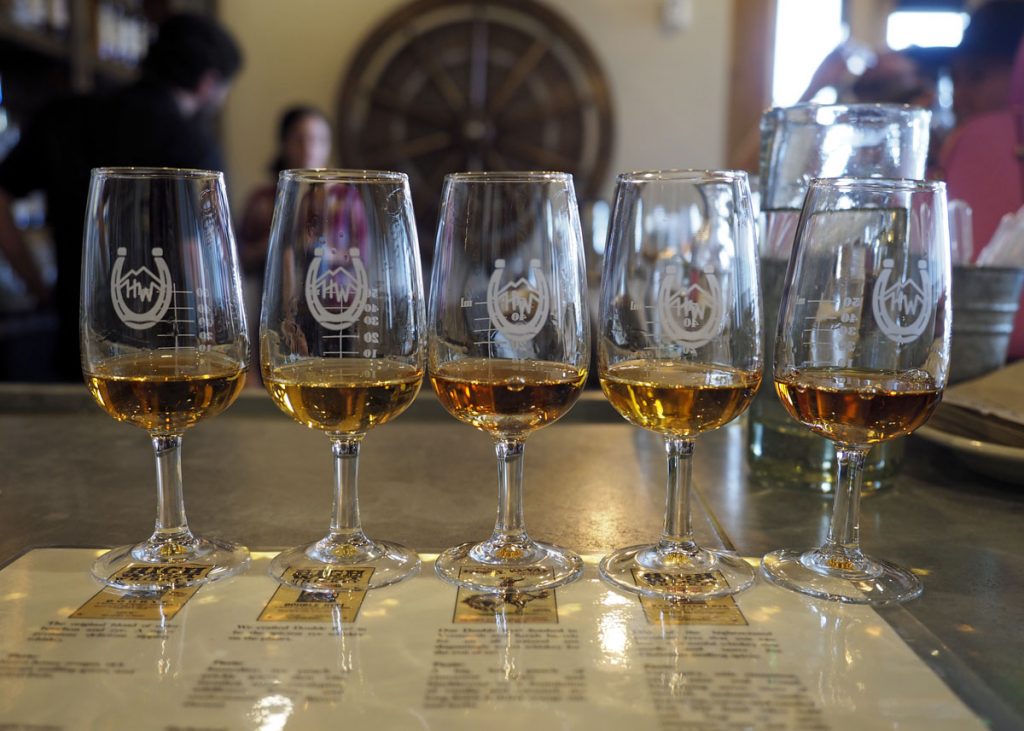 As a master of blending straight whiskies, High West has done quite well nationally and is currently available in most of the 50 states. Their used barrels are purchased by many breweries to age beer. Constellation Brands, the owners of Ballast Point, Corona, Modelo, and many wine brands, recently put in a winning bid to buy High West. They like what High West is doing and want to help them do more of it. It looks like we’ll be seeing a lot more whiskey flowing from the distillery in the coming years. 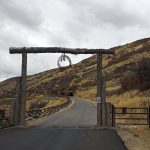 The original location began in the bygone mining town, Park City, Utah. It is housed in a couple of historic buildings, one of which was once used as a livery stable and a garage. The “Saloon”, as it’s referred to, is located at the base of the Town Lift at Park City Mountain Resort making it the only ski-in/ski-out distillery in the country. In 2015, High West opened a new distillery on the Blue Sky dude ranch in Wanship, Utah. Benefiting from a mineral-rich aquifer, this new location has taken over most of the whiskey production. The gorgeous new distillery is truly a destination for whiskey lovers. 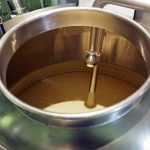 Guided tours of High West’s locations are offered to the public. I had the pleasure of touring both this fall. Getting to see how whiskey is made up close had made me love it all the more! Did you know that whiskey actually begins as beer? As you walk through the doors of the distillery, you can smell the mash simmering and fermenting in stainless steel tanks similar to what you would experience inside a brewery. 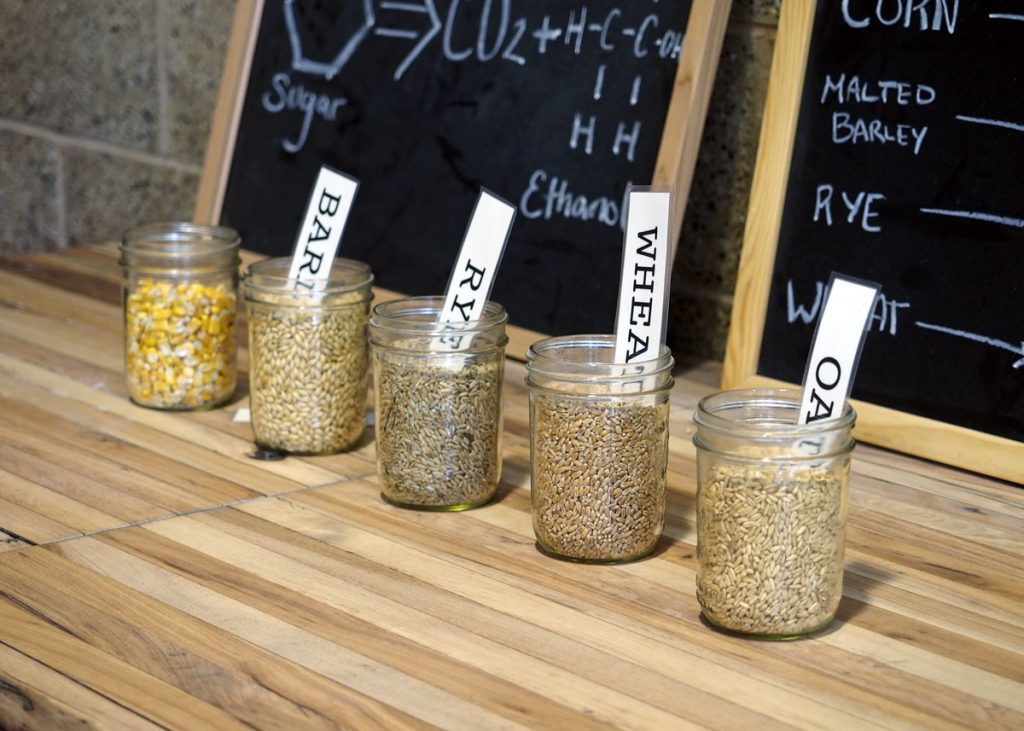 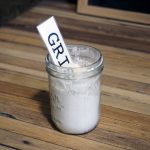 Grains like barley, corn, rye, oats, and wheat are first milled into a grist or flour. Water is added and the mixture (mash) is cooked for 1-5 hours, converting the starches into fermentable sugars. The mash is then transferred to the fermentation tank where yeast is added. The yeast eats the sugar, producing primarily alcohol and CO₂. What you end up with is beer that’s around 8% ABV. The beer is then distilled up to about 78% ABV before it goes into barrels for aging. The final product will be closer 40% ABV (80 proof). 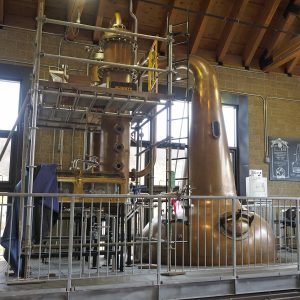 The distilling process takes place inside a copper still. Copper is an excellent heat conductor and also attracts Sulphur, something best left on the walls of the still rather than in your glass. As the fermented mash is heated, the different ingredients in the liquid become a vapor at their various boiling points and rise up into the head of the still. The vapor travels into a copper column where it is cooled. The cooling vapor falls through a series of plates or shelves in the column that control the pace of the process and also serve to collect some of the impurities. From there, the vapor travels through a pipe into a condenser where it is cooled back into a liquid and collected in a vessel.

Now, the distiller has to make cuts. This is both an art and a science. The components with the lowest boiling points come through the process first and are called the “heads.” The heads contain high amounts of compounds that can be dangerous to consume. The “hearts”, which follow the heads, encompass a high-proof ethanol (alcohol), the choicest flavors, and an appropriate amount of the chemical compounds found in the heads. Last are the “tails”. These elements have the highest boiling points, not a lot of ethanol, and terrible flavors. The distiller uses some chemical analysis, but mostly the senses of taste and smell to determine where to make the cuts. Some distilleries use automation to make cuts conservatively. High West does it by hand, resulting in better flavors overall. 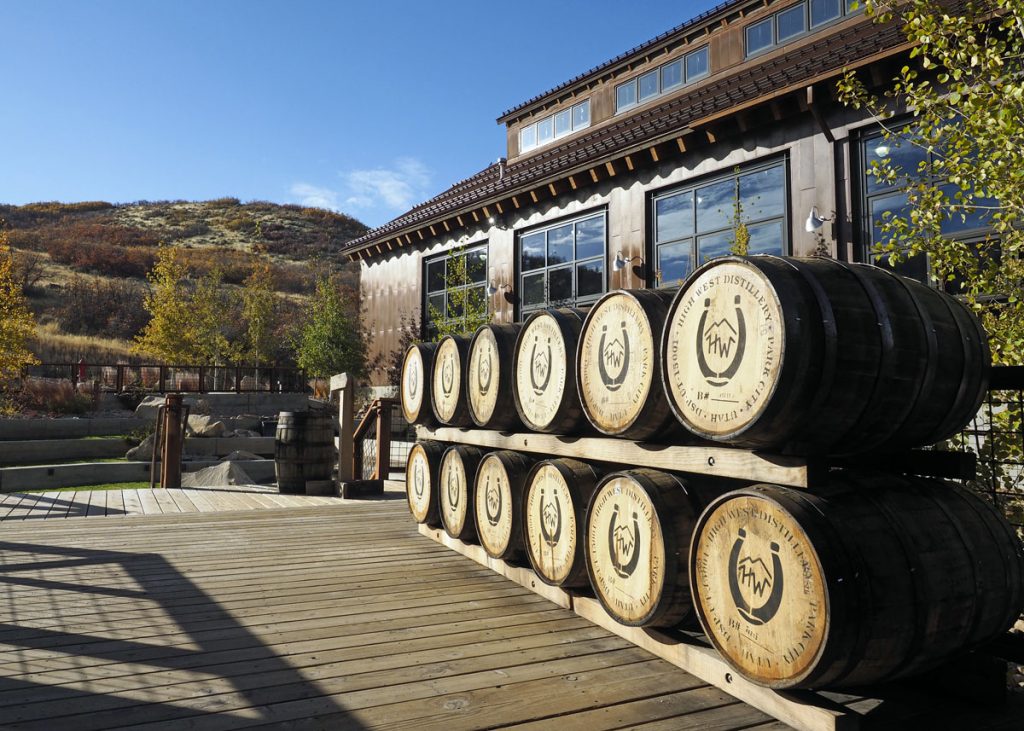 Straight from the still, the clear liquid is called Moonshine. To become whiskey, it must at least touch the inside of a charred oak barrel. 50-70% of the flavor of whiskey comes from the barrel. The longer it’s aged, the more flavor and color it will have. Varying the temperature during the aging process is good for the whiskey. Because Utah has such cold winters and hot summers, climate control isn’t needed. Utah’s dry climate also contributes to the final product as more water evaporates leaving a higher concentrated result. High West distillers will blend whiskey of varied ages from different barrels using taste and smell to create its recipes. This step is the ultimate art form of creating consistently good whiskey. A modest crew of 10 people hand bottle up to 5,000 bottles of High West whiskey per day for customers to enjoy. 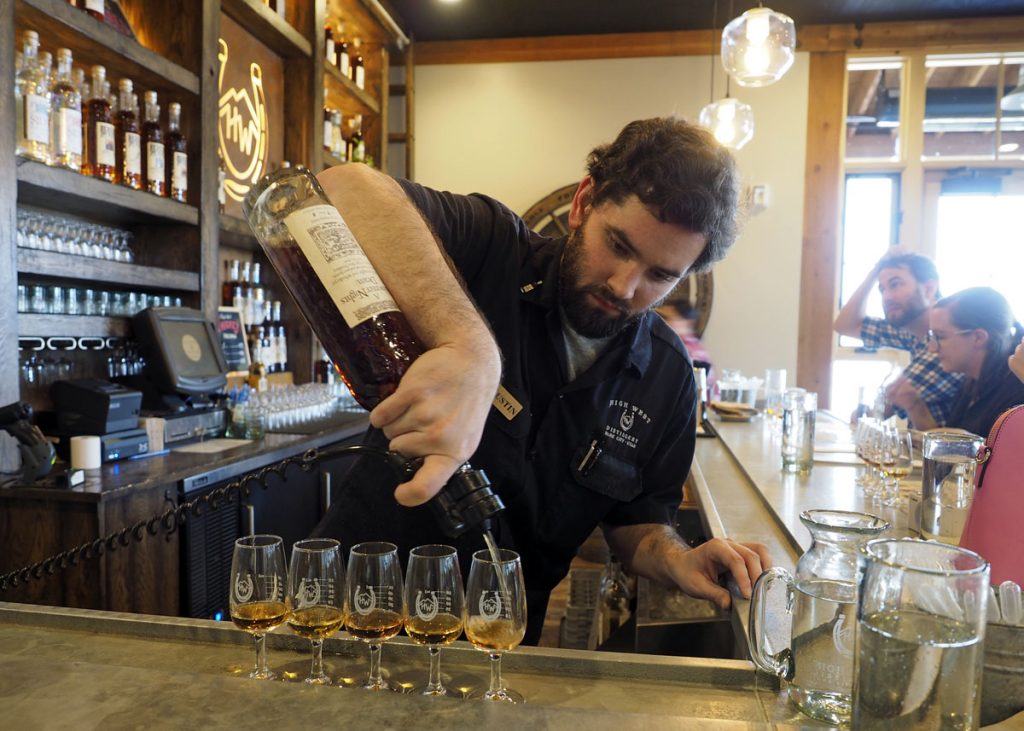 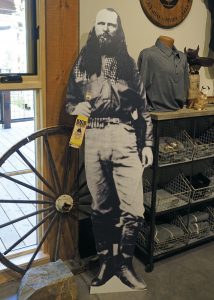 After the tour comes the best part. Whiskey tasting!! Trying different types of whiskey side by side will help you to identify the qualities they each have. Through tasting, I was able to recognize which were my favorites. Mature whiskey seems sweeter and a little smoother while younger whiskey retains more of the the flavors of the grains. Valley Tan is a good example of the latter. It’s a nod to Utah’s pioneers who made whiskey from wheat and showcases the historical figure, Porter Rockwell. 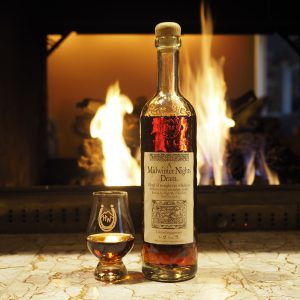 High West makes fabulous examples of both Bourbon (corn) and Rye whiskey. I really like Bourye, a blend of both Rye and Bourbon. The Campfire blend of Rye, Bourbon, and Scotch is also interesting if you like a little smoke. A Midwinter Nights Dram was just released for the colder days ahead. It features the Rendezvous Rye aged in both Port wine barrels and charred French white oak (type used for Chardonnay) barrels. Get it while you can! 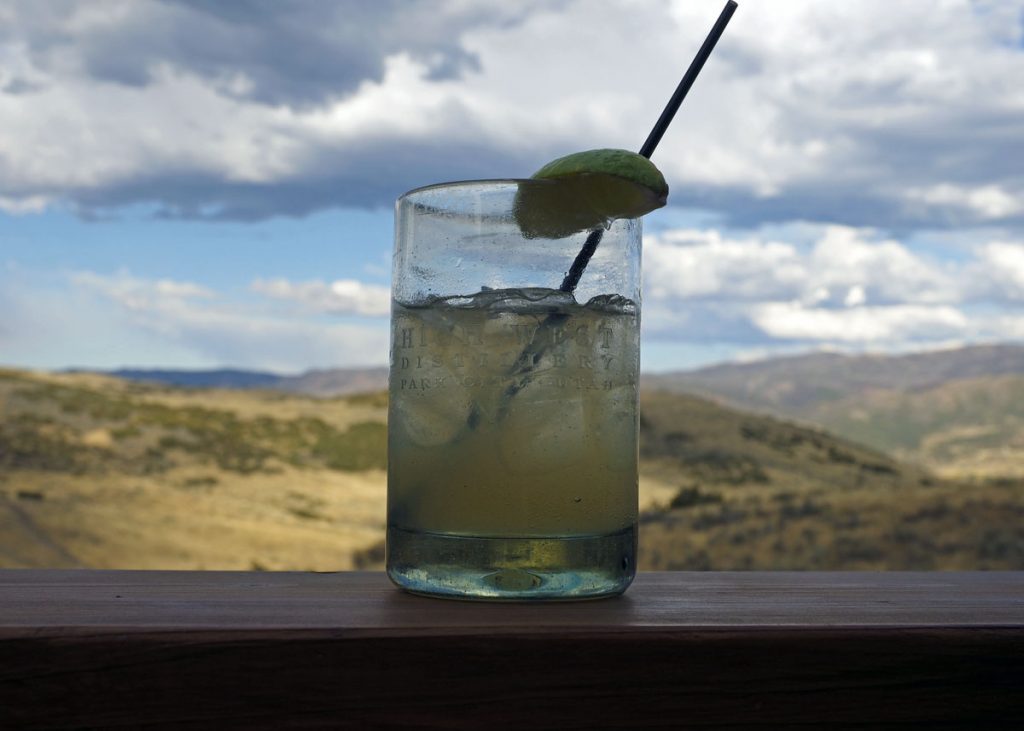 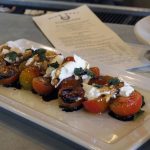 Both High West Distillery locations also offer great food and cocktails. The Saloon in Park City has a full menu for lunch and dinner. The Wanship distillery highlights a more limited “light” menu and a full Sunday Brunch. This is the last weekend to take advantage of the Sunday Brunch for a little while. If you miss out, look for it to come back sometime in January.

For a full gallery of photos, visit our Facebook Page.

If you haven’t been out to visit High West Distillery yet, make a date to do it! It’s a delightful piece of Utah history, and there’s a lot of whiskey love going on there.