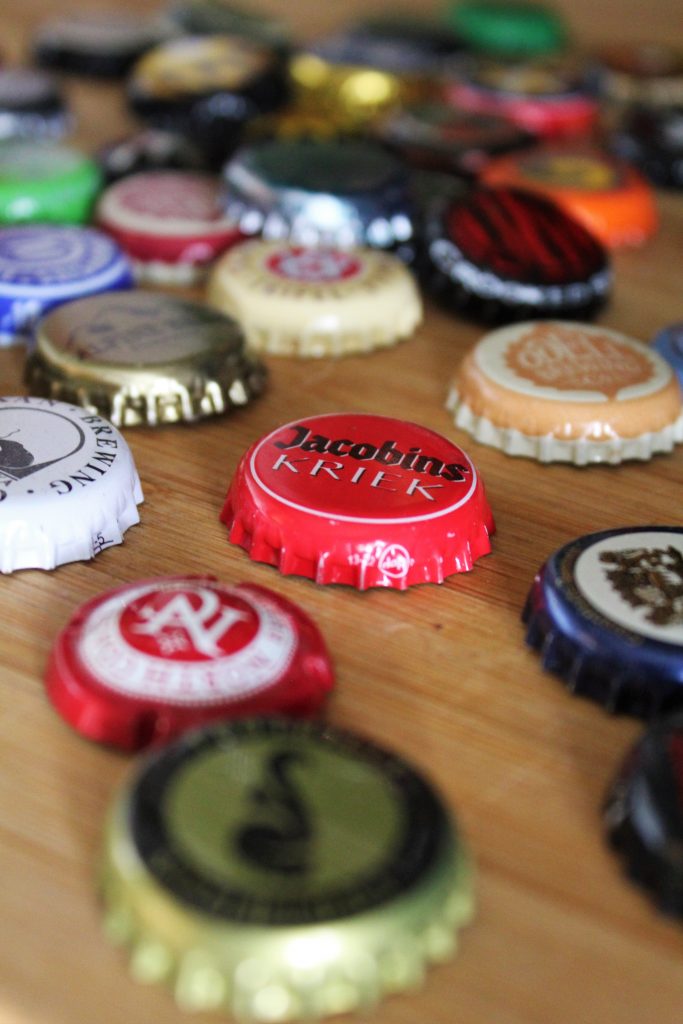 The main purpose of a bottle cap is to keep the contents of the bottle from pouring out unexpectedly, and also to provide easy access for when you want that liquid goodness to come out. The life of most caps ends with the hissing release of carbonation, after which they are pronounced dead. Many are thrown out, and some end up on bar floors where they can make you slip harder than a banana peel in Mario Kart. If you’ve ever been the victim – slipping feet over head onto the hard floor in the middle of a busy bar, your relationship with bottle caps may be a sour one. But cheer up! There’s more to be done with bottle caps than throwing them out or embarassingly slipping on them! That’s right… they’re not dead yet.

My fascination with these caps started at a young age. I was obsessed with collecting things. My friend and I used to go down to the creek by her house and collect anything unusual – buttons, bottle caps, nice looking rocks, broken pieces of pottery. One time, we found the jawbone of what we assumed came from a cat. That went into the collection as a prized piece! We were heartbroken when we discovered that her mom had thrown away our “trash”, but the spirit to collect oddities carried on.

I often picked up bottle caps in parking lots and marveled at their design. If they weren’t too rusted, I might hold onto them until they disappeared like many childhood treasures. I wouldn’t be surprised if my Mom actually threw them away, fearing the influence of marketing and brand recognition might one day turn me into some sort of beer swilling savant. 😉

I can remember getting a metal detector for my 11th birthday. Seashells could be found lining my dresser, and Yard Sale Saturdays with Mom were my life. I was a natural born treasure hunter.

Almost 20 years later, not much has changed. 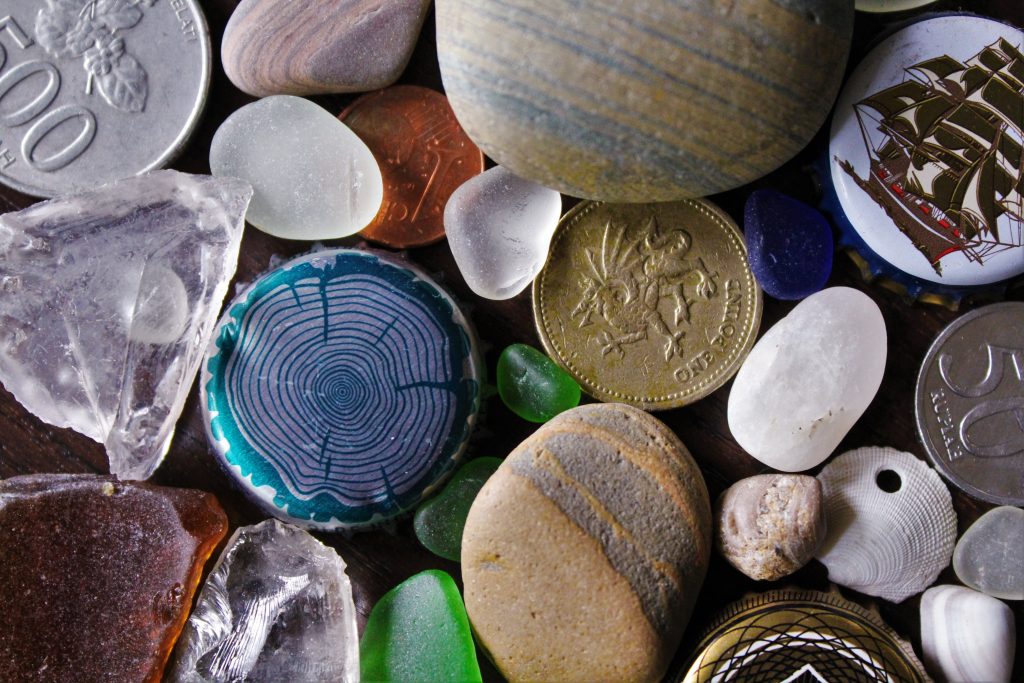 I may be a bit more selective about what I hold onto (no cat jaws… for now), but I sure do love my treasures. As an adult, my love for beer and collecting “trash” has turned into a love for collecting beer bottle caps!

The internet assures me I am not alone in my endeavors. A simple search for “beer caps” brings up a multitude of ideas for what to do with these other than dump them in the trash or parking lot. Here are a few of my favorites, mixed in with some ideas of my own. 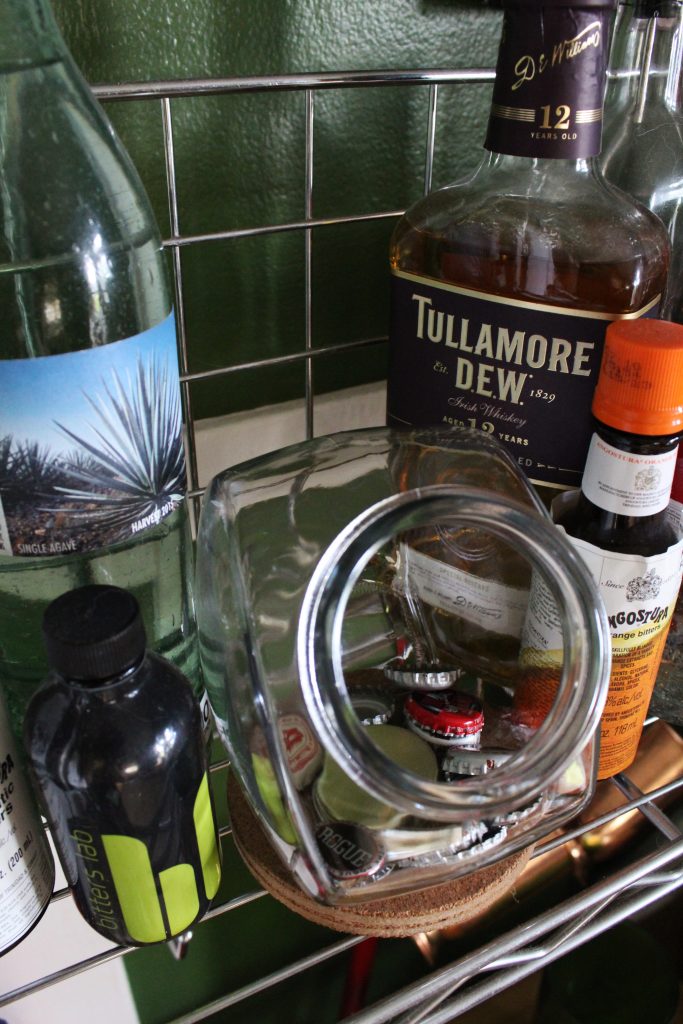 This is a game of my own making, though I am absolutely not the first to do it. Here’s what you need: a bottle cap, an open container of your choosing (mine is glass with a diagonal opening), and a toeline from which you will pitch the cap. The rules are simple. You must pitch the cap into the open container without stepping over the line. If you miss and the cap happens to roll back to you, you get a rebound (try again)! If you happen to sink it, you do a crazy victory dance even if you’re home alone and your dog is judging you.

Play with others, make up your own rules, and don’t forget about the beer you just opened. My best pitches, I’ve learned, are about 1.5 beers in. Find your sweet spot! 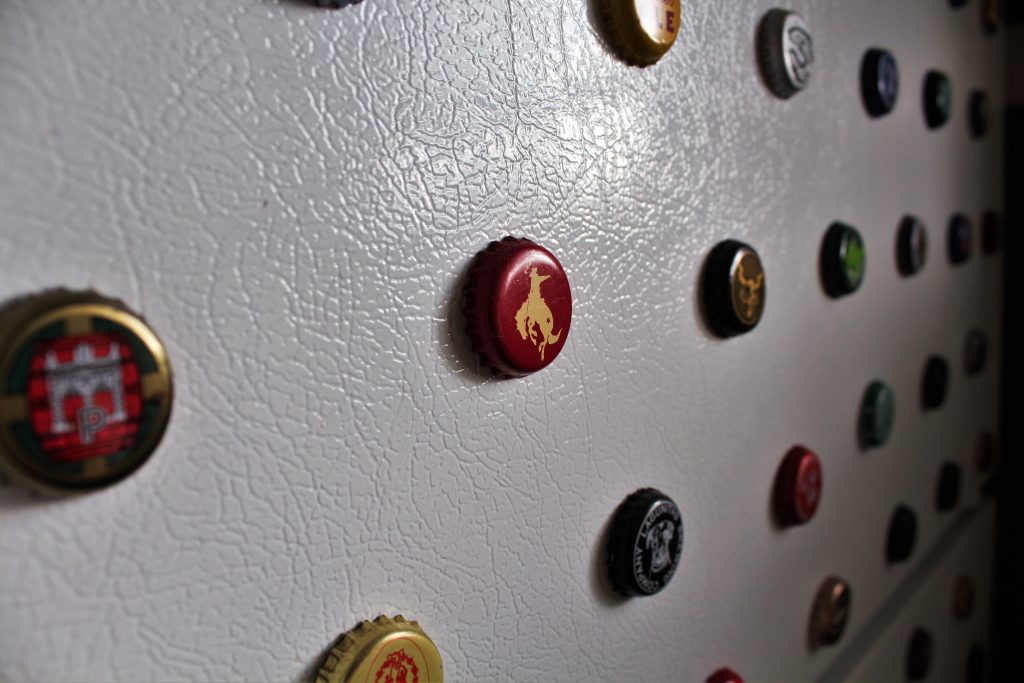 Here is my train of thought when opening a bottle of beer…
*fftttsssssss* “Oh yeah, beer time.”
“Hmmm… do I have this cap yet? *checks fridge and recent memory*
“Duh… It’s from Red Rock.” *prepares to pitch the cap*

“Nope. Don’t think so.” *places the cap in a pile on top of the fridge*

In the case of the latter, that pile on the top of the fridge will eventually be paired with magnets I bought from Michael’s. They sell 50 packs for $7.99 at the SLC location, which is the best price I’ve been able to find. After the magnet is placed snugly in the cap, it goes on the fridge in a nice crisscross pattern.

This is my collection of 2.5 years. 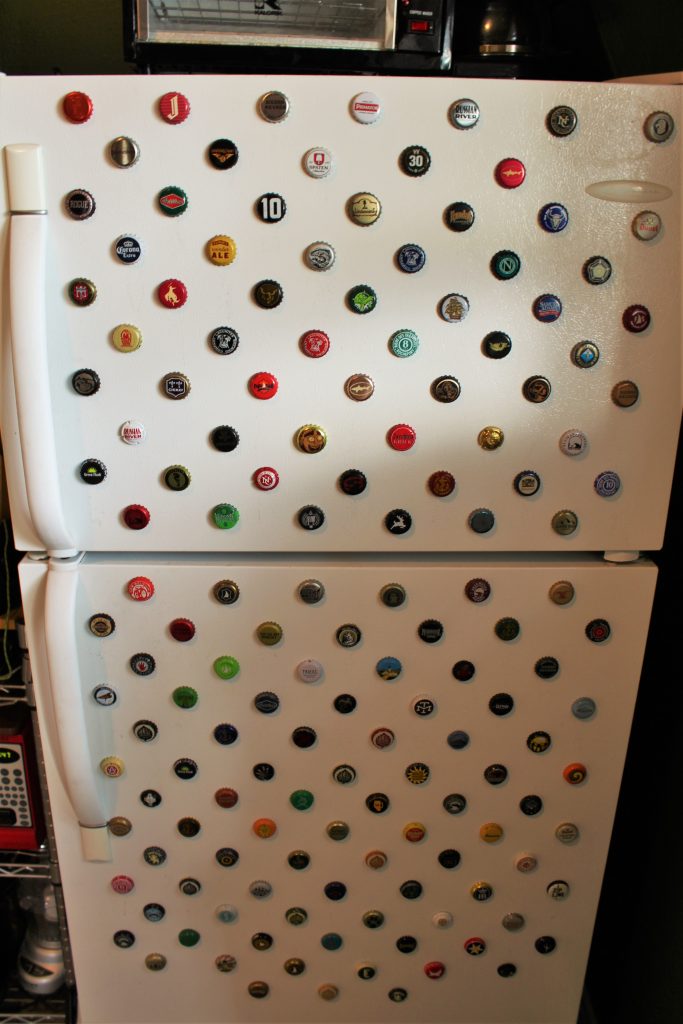 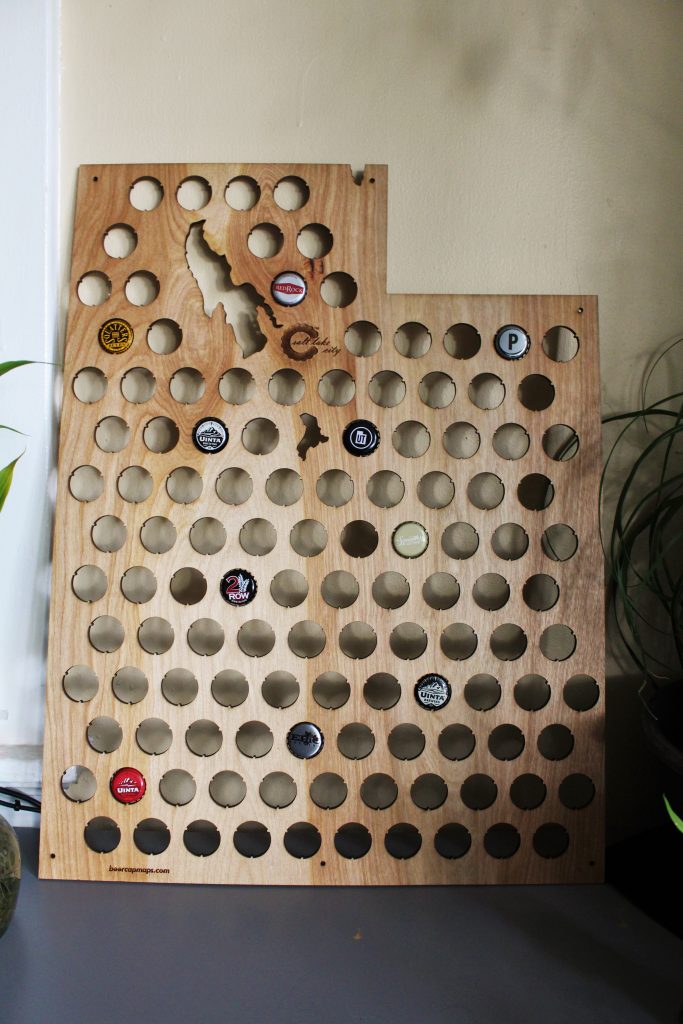 While we’re on the topic of displaying bottle caps for aesthetic purposes, the overwhelmingly most popular result when googling “beer cap” was Beer Cap Maps! These “maps” are fashioned from wood or metal, and come in the shape of different US states or a varied selection of entire countries. Have fun collecting and displaying caps on your map that reflect the geography, or display caps with no rhyme or reason at all. The choice is yours!

I’ve decided to load my Utah beer cap map up with different breweries from Utah. I’ve come to the conclusion that UTAH NEEDS MORE BREWERIES! Also, there are a handful that either only package in cans, or do not use branded bottle caps. The only one missing from my collection is Talisman, which I shall fix by the end of the day! 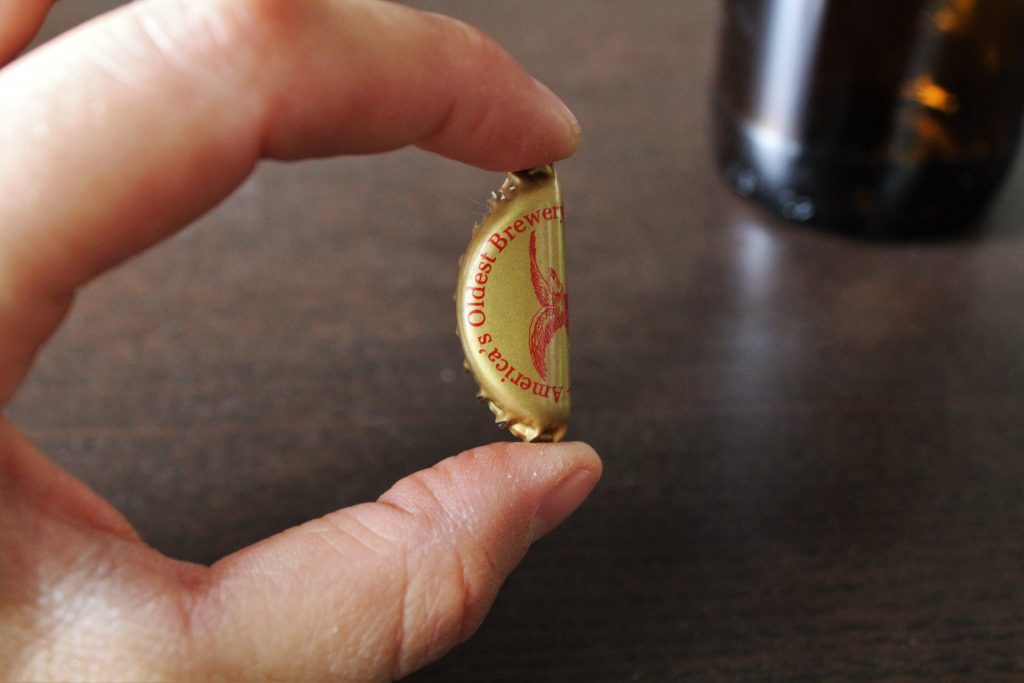 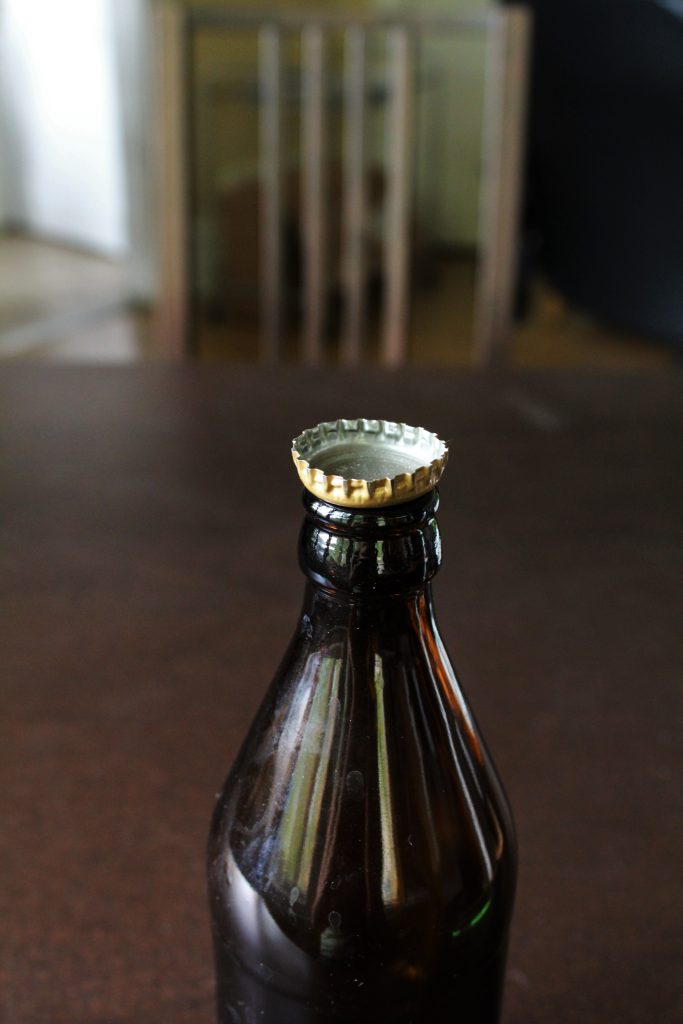 This is one I learned while drinking cheap beer in Australia. It’s best played outdoors during a long session of drinking… dare I say it… straight from the bottle.

I know, I know! I’ve cursed this very thing many times, and yet, it exists. And so, should you find yourself in such a deviant situation, here’s a fine game to play.

You’ll need two people, two bottles, and at least two bottle caps. This game is easier if started at least an hour or two into the session when caps are plentiful. You and your friend (or enemy) sit across from each other at a table. If it is your turn, your opponent will sit with their beer in front of them, and a bottle cap placed upside down on top of the bottle. You will try to knock the cap off their bottle by throwing a cap of your own. This throwing cap can be bent in half for better aerodynamics if desired. You have three tries until it is your opponents turn. If you knock your opponent’s cap off, they must either chug their beer, or complete a previously determined dare. I have even seen bets on the table. This game is as enjoyable for participants as it is for bystanders. Again, the rules are up to your making, so make it good! 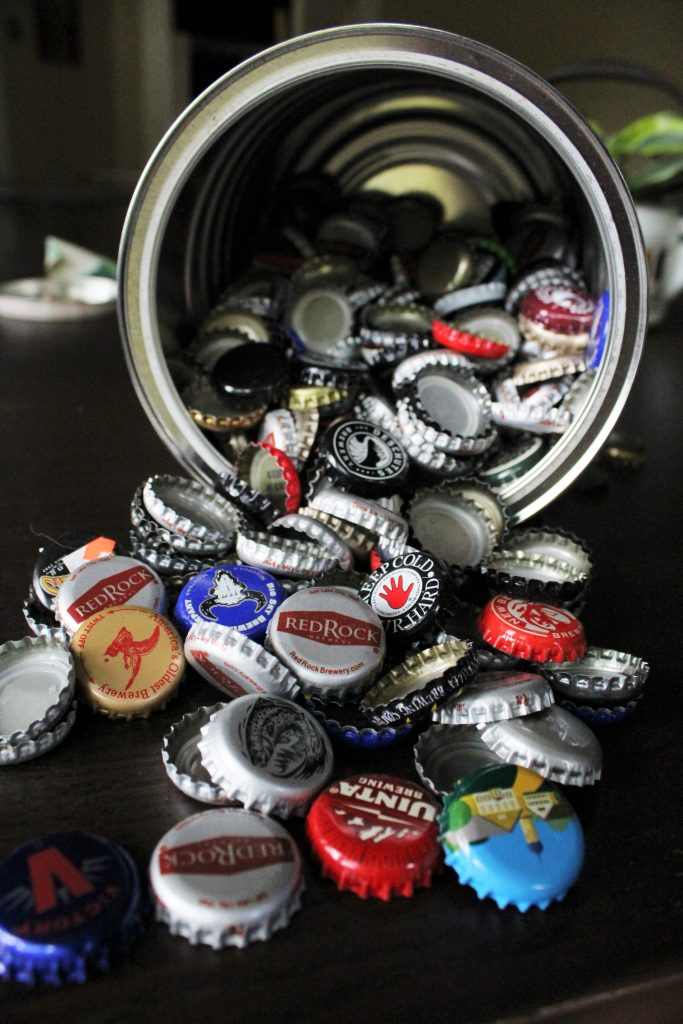 Finally, you can simply collect caps in a coffee can until you figure out what the hell you’re going to do with them. We all need a little more clutter in our lives, don’t we?

Here’s to crafting a fine beer cap game or piece of art worthy of the beautiful beers they once protected! 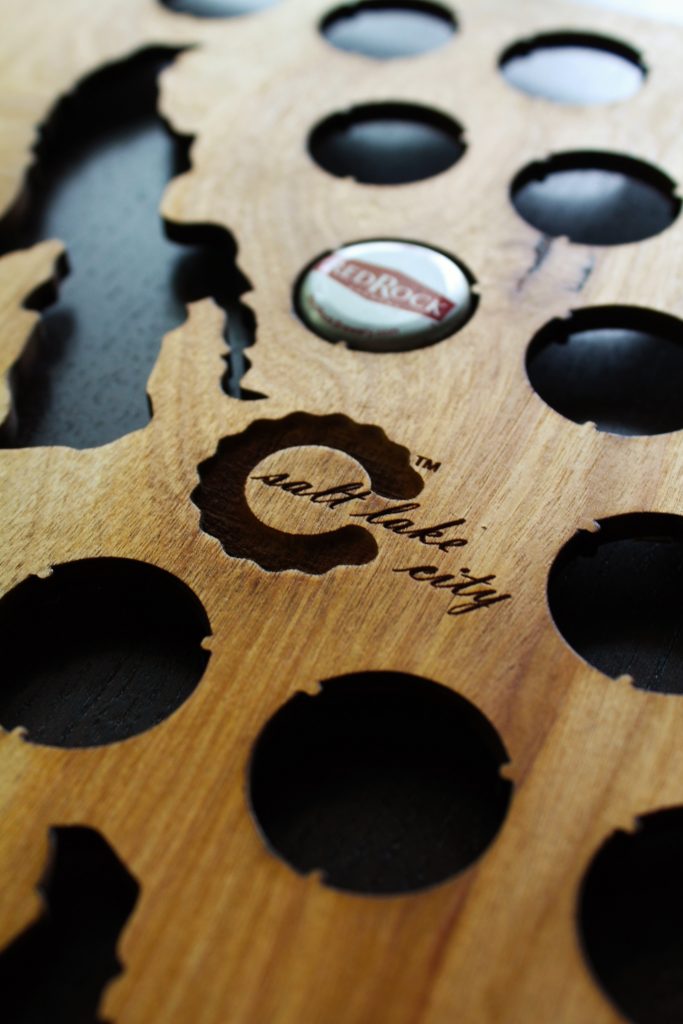