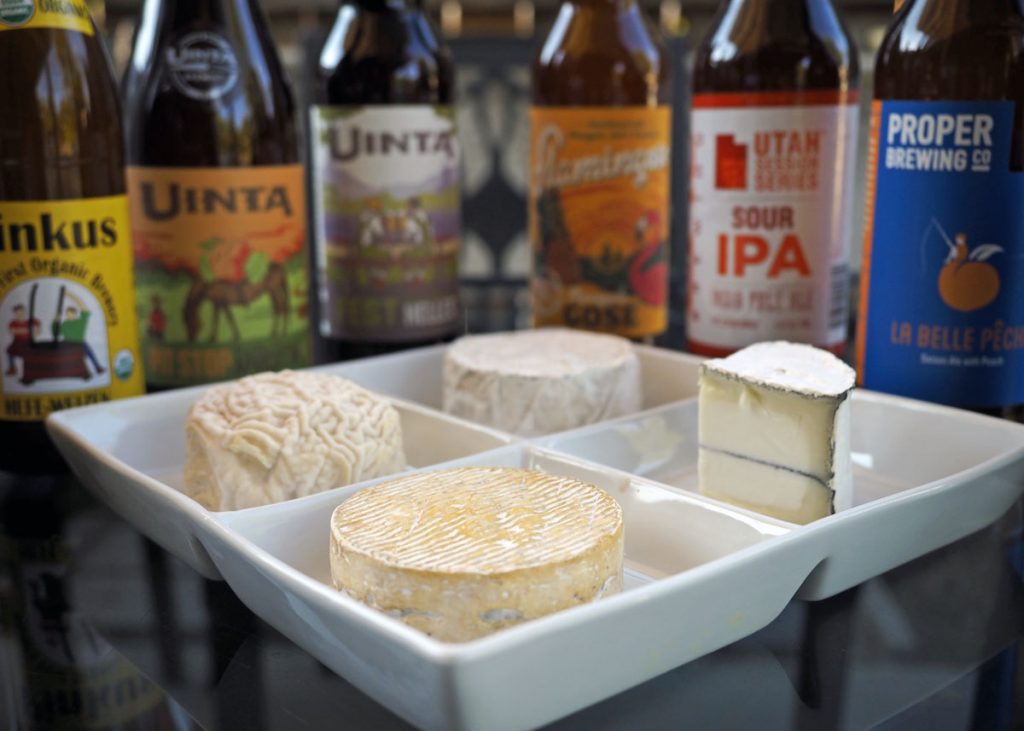 Welcome to the summer edition of Crafty Beer Girls’ Beer & Cheese Pairing with our friends from Harmons Grocery and Solstice Chocolate. If you missed the winter edition, you’ll want to check it out and read the introduction to familiarize yourself with our beer-loving cheese expert, Andy Fitzgerrell, and our tips for pairing beer and cheese.

For summer, we experimented with eight different cheeses, eight different beers, and three kinds of chocolate and found several great combinations. All cheese and chocolate can be found at Harmons and beer can be bought from local Utah breweries or at the DABC.

First, I’ll introduce the beer and the chocolate. Then, I’ll go through each cheese and tell you which beer selections paired well with the cheese. I’ll throw in a few tasty chocolate options along the way. When tasting, try to start with the mildest and work your way to the stronger flavors. 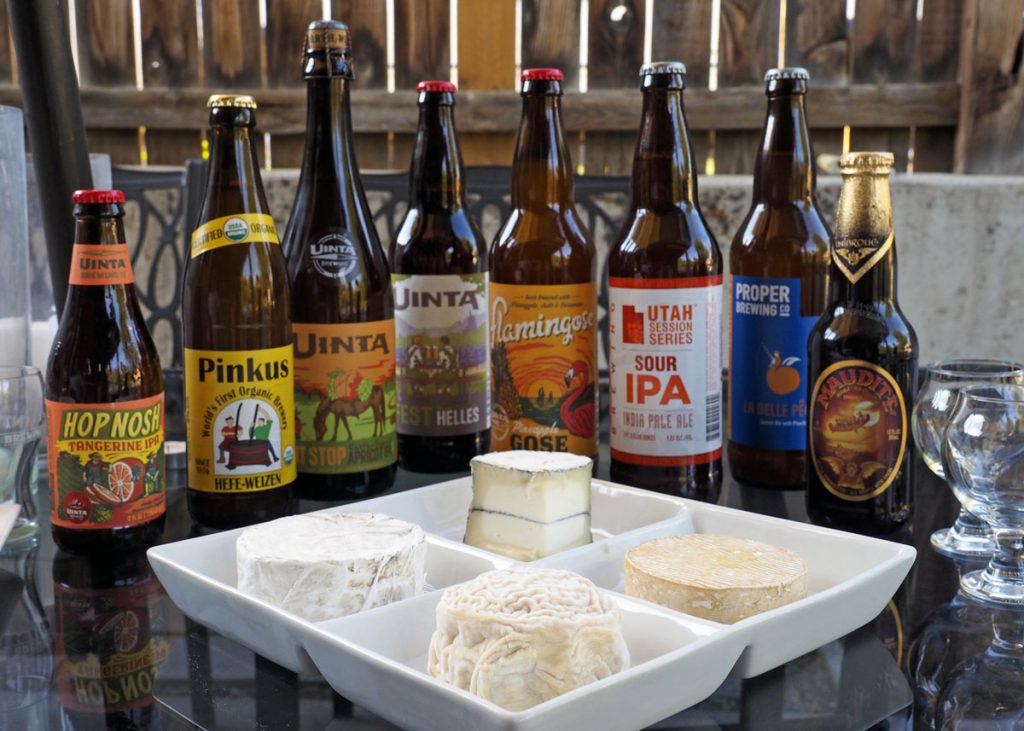 The Beer:  We went with seasonal beers perfect for the warm weather. 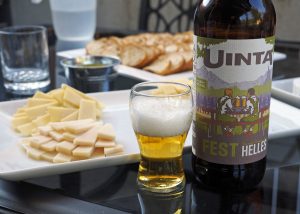 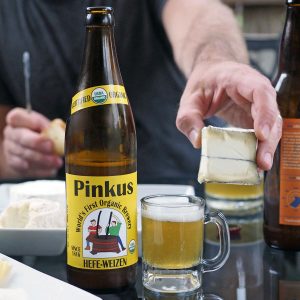 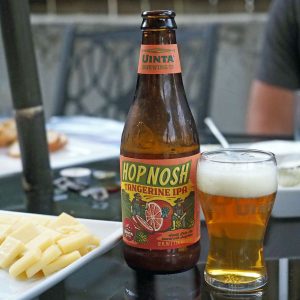 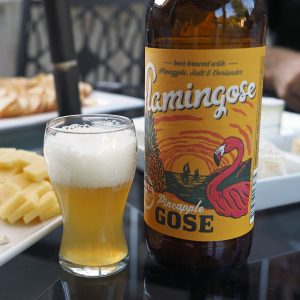 Uinta Flamingose: Gose-style (tart & salty German wheat beer) made with pineapple to give it a sweet, tropical flair. 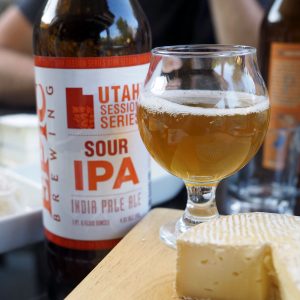 Epic Sour IPA: A kettle-soured IPA with lemon and grapefruit flavor and a crisp finish. 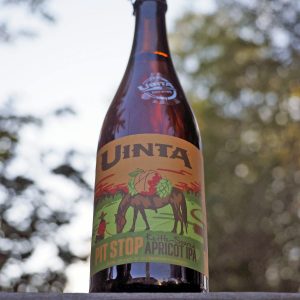 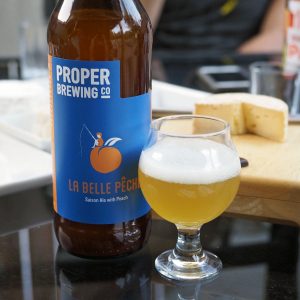 Proper Brewing Company La Belle Peche: A farmhouse/saison ale with the aroma of fresh peaches, a little bit of funk in the flavor with subtle peach notes and a dry finish. 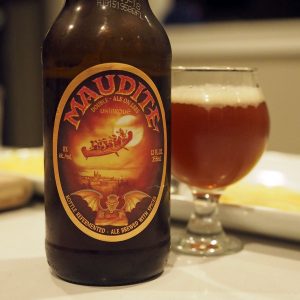 Unibroue Maudite: This Belgian-style dark strong ale has robust malt flavors with spices. It has this beautiful label (click to enlarge) with a story behind it that Andy was eager to tell us.  You see there were three French Canadian Lumberjacks who wanted to make it home for the Holidays, but there was a winter storm. So, they made a pact with the Devil for safe passage in a canoe they paddled through the sky. After they had their nice holiday and were headed back, one man lost his nerve and jumped from the canoe, damning all three of the men to hell immediately . Maudite translates to “damned”. Pretty cool, eh?

The Chocolate:  Scott Querry from Solstice brought three different chocolate selections to play with. If you like these, be sure and check out the chocolate pairing from our winter edition too. It was awesome!

Madagascar: Cultivated in a specific tropical climate along the Sambirano River. Hints of citrus and berries. The citrus notes in this chocolate went nicely with the Epic Sour IPA. We also liked the fruit notes it brought out in the Maudite.

Tanzania:  Grown in the fertile land of the Kilombero Valley. It has bright notes of wine, lemon, and tart fruit with a floral hint of honeysuckle.

Wasatch:  A blend of cacao that creates a mild chocolate with an essence of cream and subtle, sweet spice.

The Cheese:  For summer our cheese expert went with selections made from milk harvested during the second lactation cycle. That’s when animals spend more time in the pasture eating a variety of grasses and their milk will have a higher protein and butterfat content. With the exception of the Midnight Moon and the Gruyere, all cheeses should be eaten rind and all.

Cypress Grove Purple Haze:  Chevre or fresh unripened goat cheese from happy goats that spend 365 days a year outdoors in Humboldt, CA. Happy goats make tastier cheese. Purple Haze is made with fennel pollen and lavender. It’s best served at room temperature. Light, sweet, and creamy with herbal notes from the fennel and lavender. This was definitely my favorite cheese!

Grafton Village Cheddar:  2 year aged raw cow’s milk cheddar from Vermont. This cheese is aged in a vacuum sealed bag (instead of cloth), and is one of the better quality commercially produced cheddars. It’s creamy, herbaceous, and grassy with pasture notes.

Mt. Townsend Seastack:  Named after the rock columns along the northern coast of Oregon and Washington. This is a soft ripened semi-lactic cheese made with cow’s milk. It has a vegetable ash rind with sea salt and a white mold bloom.  It has a delicate, mild, buttery, and bloomy (earthy, mushroom) flavor.

Mt. Townsend Off Kilter:  Semi soft-ripened cheese washed in Pike Brewing Company’s “Kilt Lifter” Scotch Ale. Unlike other washed rind cheeses, this one is not heavy on the bacteria flavors. It has a nice malt flavor from the beer along with an earthy (bloomy) flavor from the white mold on the rind.

Cypress Grove Humboldt Fog:  This sample is on the younger side. The soft-ripened goat cheese has a bloomy rind with vegetable ash and buttermilk, fresh cream, and herbal/citrus flavors.

Vermont Creamery Coupole: This is a goat soft-ripened cheese with a yeast rind. The geotrichum (a genus of fungi) is what gives it the distinctive “brains” look. This cheese is gamey and goaty, with barnyard notes.