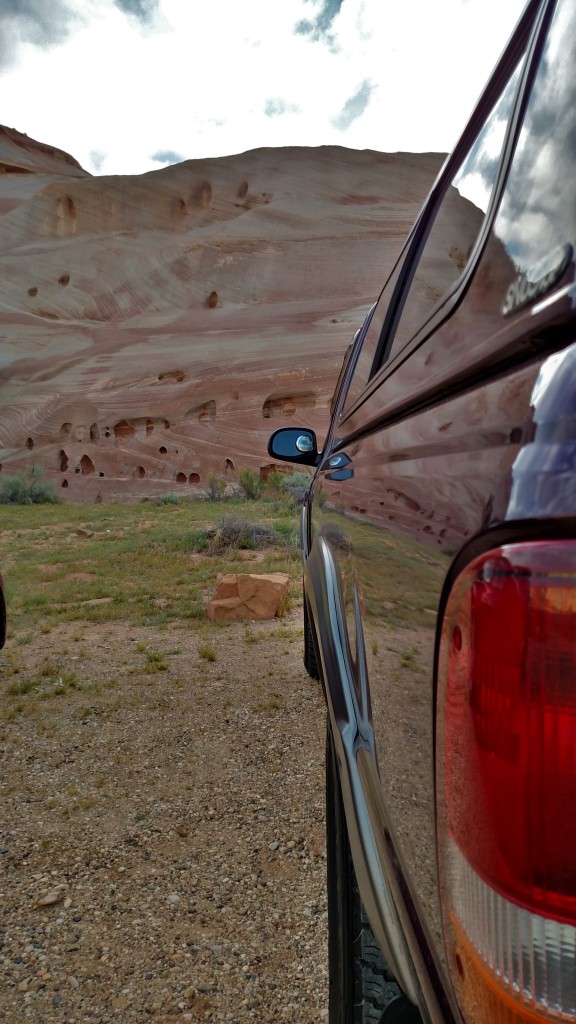 If it were up to me, this is what I would do. I would travel to places, drink their best, see their best, make friends with their best, and write all about it here. The world of beer has enough stories to tell using that formula to write volumes, but a chapter or two will have to do for now.

Last year, I took the BJCP (Beer Judge Certification Program) online entrance exam as a pretest for the Certified Cicerone® exam. Those that pass are given a year to take the tasting exam before having to retake the entrance exam. When I passed, I said to myself, “Hmmm… I’ll get on that one day.” And one day, about ten months later, I settled on taking the BJCP tasting exam in Phoenix, Arizona. I had never been before, and felt it was the perfect opportunity to get to know Arizona, its people, and its beer.

Here is my experience…

As most eager travelers would have it, I was on the road to AZ no later than the moment I was able. That meant I left immediately after work on a Thursday. It was just in time to catch rush hour traffic heading south from SLC, but it was manageable. By the time I was passing through Panguitch, UT, I realized I wouldn’t be making it to Arizona before stopping for the night. I brought some UT beer to share with those in AZ, but I didn’t want to dip into the honey pot for my own sake. Forgetful, thirsty me had to wander into a gas station and pick up a six pack of Corona for the evening. They didn’t even have limes.

I reached the White House Campground east of Kanab by 11pm. It was a perfect 70° night with a gentle breeze and a full moon. There was a sweet perfume in the air that smelled something in between honeysuckle and gardenia. I sat on my tailgate and nursed my way through a couple Coronas. It wasn’t the ideal beer to be drinking during craft beer week, but it was better than enjoying the evening without any beer at all. 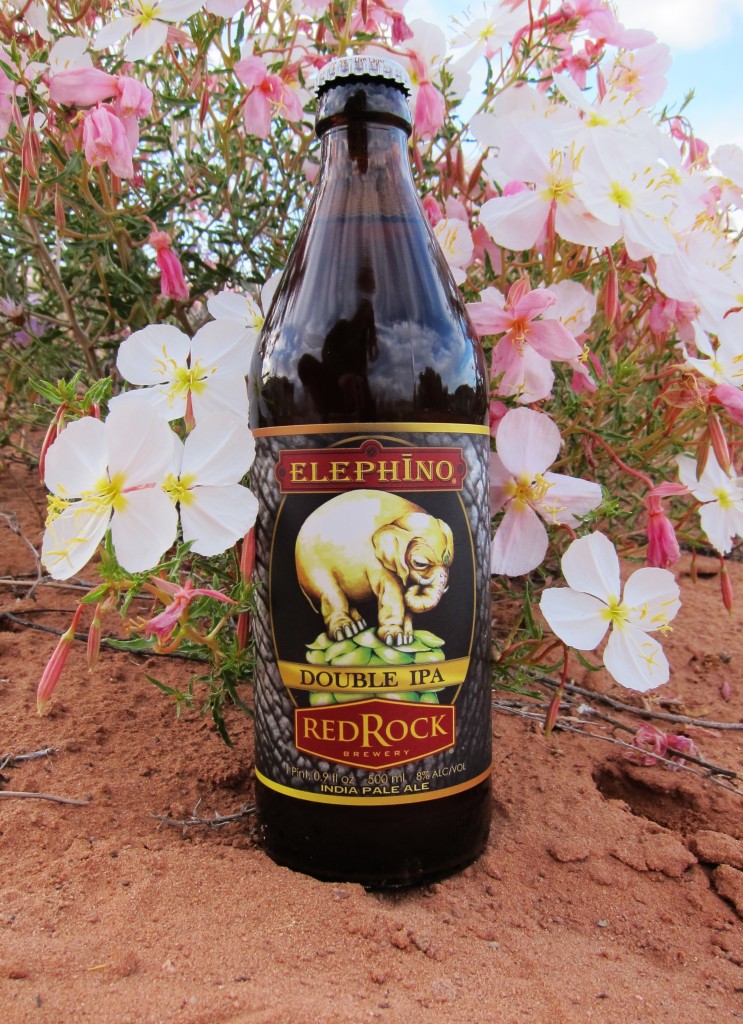 In the morning, I woke to a view of red rock, sand dunes, and brush. A short jaunt down to the river revealed the blossoms that made the air so sweet. I snapped a photo of a wild bottle of Elephino nestled amongst them in its natural habitat before getting back on the road.

I took my time with the AM, stopping at the iconic Horseshoe Bend and grabbing a coffee before a few more hours of driving. It got hot fast. Just as I broke a sweat, I started climbing in elevation all the way up to the quaint town of Flagstaff, AZ. Of all the places I stopped on my trip, Flagstaff seemed the only one I would be happy to stay at for more than a few hours. 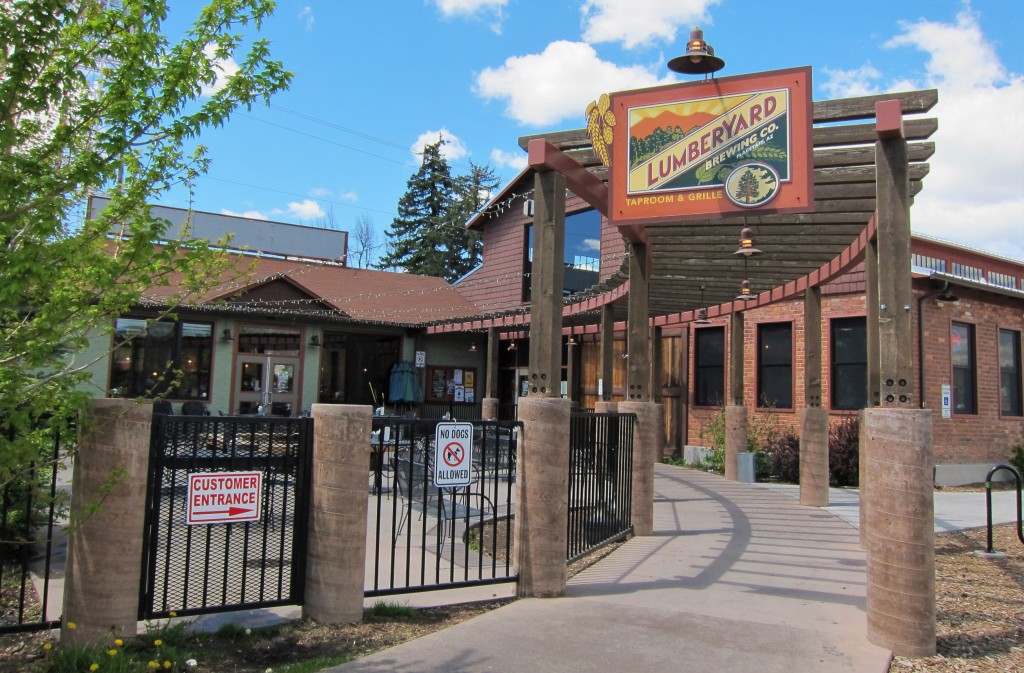 It was about beer time, so I stopped at Lumberyard Brewing Company for some bites and brews. The aptly named brewery was built in the belly of an old lumberyard, and now pushes out a different sort of piney scented product, like their Knotty Pine Pale Ale. I enjoyed a flight and a 1/3rd rack of ribs with potatoes and corn bread. It was just what I needed after a long drive. 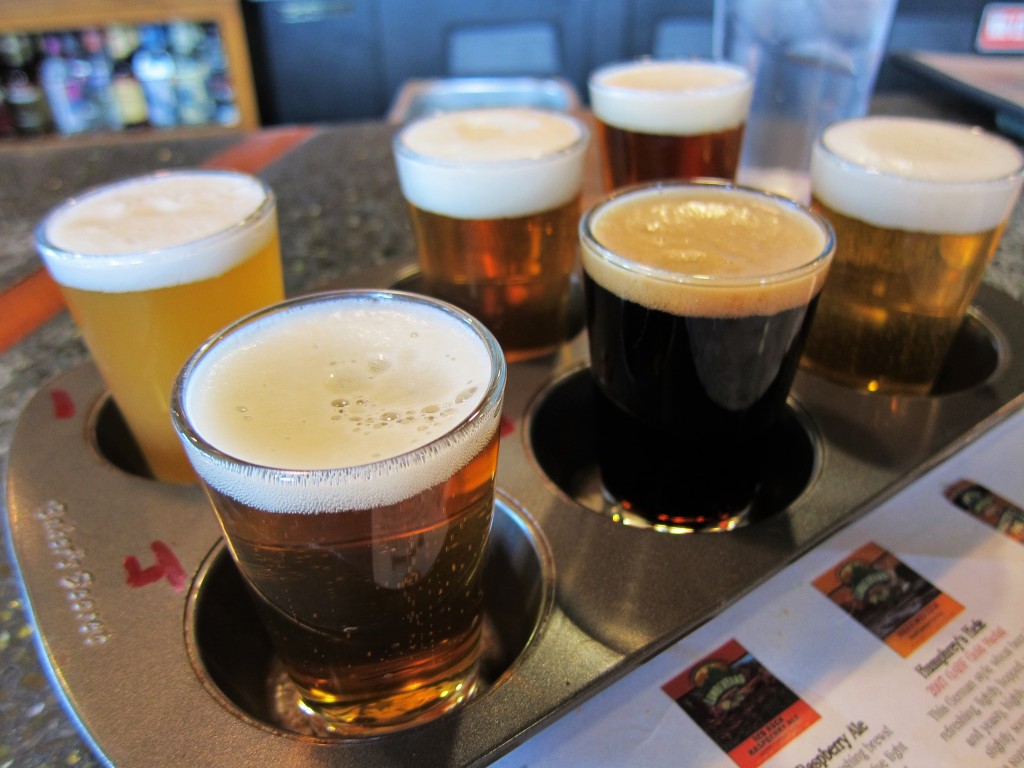 While chatting with one of their brewers, I was asked if I had ever heard of Bohemian Brewery in Utah. It turns out, Lumberyard had accidentally received a Bohemian keg several months back when the south rim of the Grand Canyon closed for the season. I offered to return the keg to Bohemian, and the kind brewers at Lumberyard gave me some beer for my trouble. Head Brewer Gene Almquist and crew are a world class bunch. The world is a small place, my friends!

I set off down the road a little heavier and a little happier. But when I hit the heat waiting for me at the bottom of the mountain, life got sweaty. I have a working air conditioner in my truck, but I also have pride and a pocket that prefers its contents spent on beer rather than frivolous comforts. I barreled through the sweltering day, with which I made a truce by downing an iced coffee and blasting tunes as I rolled down I-17.

It wasn’t long before I realized Phoenix is as big as it is hot. Both of which are much more extreme than I had imagined. I arrived at a small hostel near downtown, took a desperately needed shower, and set out on foot to the local watering hole. If I hadn’t known any better, I’d say this city is full of beer sucking vampires. The sun goes down, and the city suddenly comes to life. 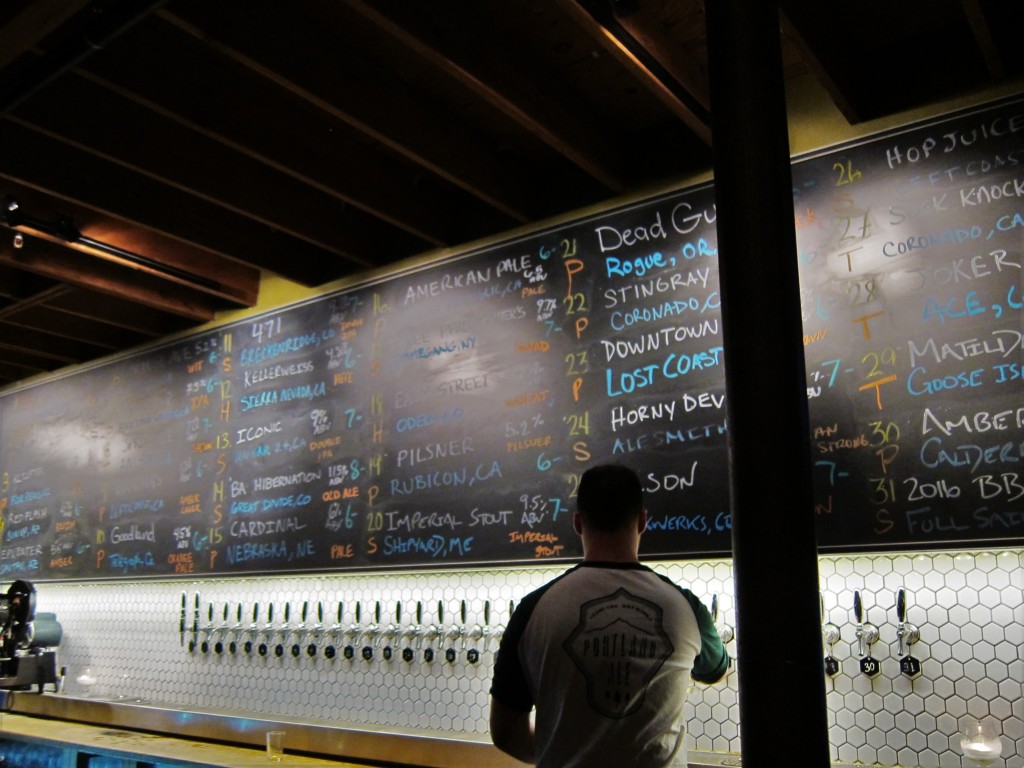 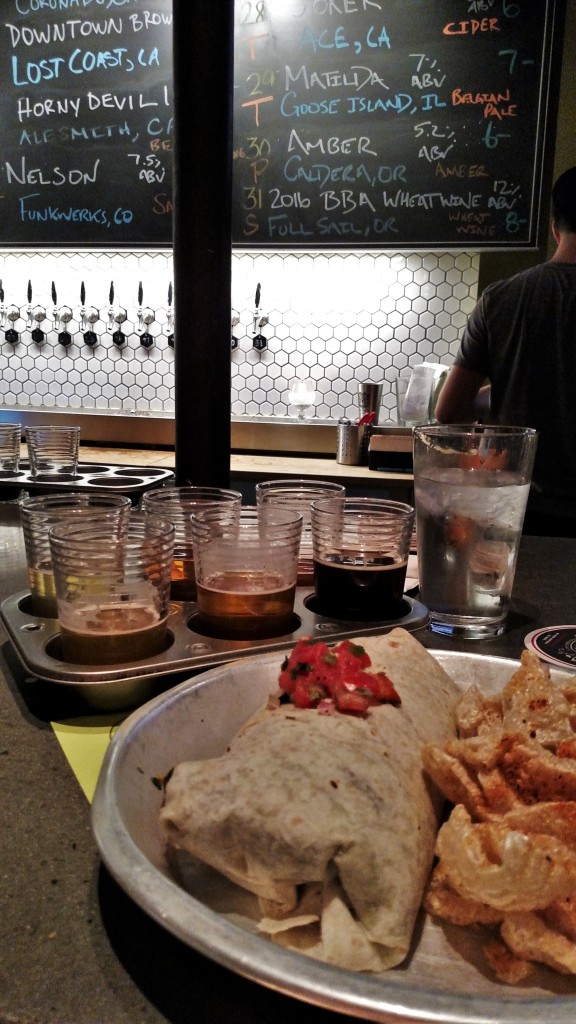 Angels Trumpet Ale House was one of the most highly recommended locales, so that’s where I found my first beer in Phoenix. Their chalk board was full of unfamiliar names, with a few well known standards sprinkled in. Throughout my meal, beers were wiped from the board as they ran out and replaced with something else. The bartender explained they only have one keg of each beer, so taps rotate quite frequently. I ordered a flight, which came in a muffin tin for the second time that day. I also ate way too much of my Phoenix-sized burrito with chicharones. There was absolutely no room for anything else in my stomach when I left, so I crashed back at the hostel for the night.

The next morning, I awoke refreshed and ready to crush some breakfast. Some of the best iced coffee I’ve had in a long time and a traditional breakfast from the local farmers market helped prepare me for my 11am beer exam. I was in and out in a quick 1.5 hours, and left feeling accomplished. I’ll find out my scores in a few months time. 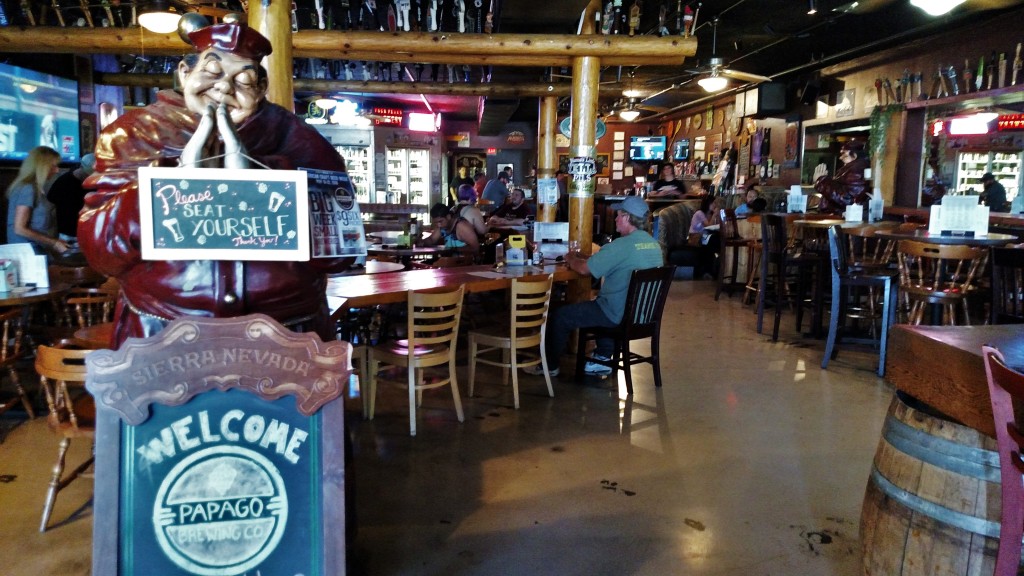 One last stop before heading north lead me to the doorstep of Papago Brewing Company. They had a large fridge full of local and imported beer, from which I assembled a couple cases for my tasting pleasure. Their tap list enticed me to sit down for a pint and some food while their busy cashier scanned through the 50+ different bottles I intended to buy. I 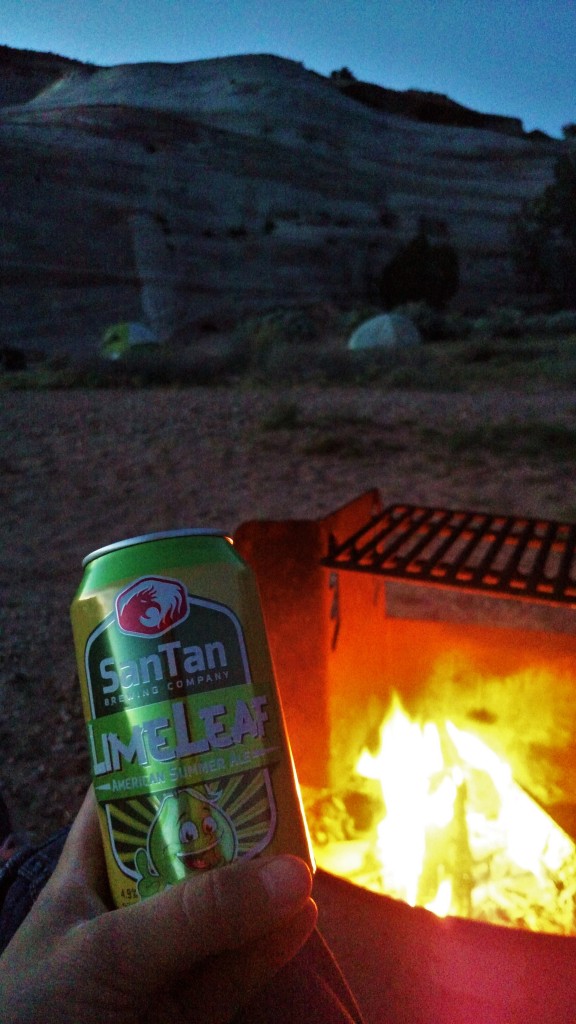 was back on the highway by the early afternoon, greeted intensely by the mid-day fire air.

The rest of the drive home was uneventful, though gradually more forgiving with the temperature. I stopped for the night at the White House Campground once again. This time, I was able to watch the sunset and enjoy a campfire with some AZ brews before nodding off. It approached freezing temperatures that night. What a stark contrast from a few nights ago!

I made it home by the early afternoon on Sunday, unsure if I’d ever like to visit Phoenix again. Perhaps a winter visit would change my mind about the place, but it’s just too insanely hot there to function 3 seasons out of the year. Nonetheless, it was an experience I’m happy to have had, and a happy journey home for a long lost Bohemian keg. 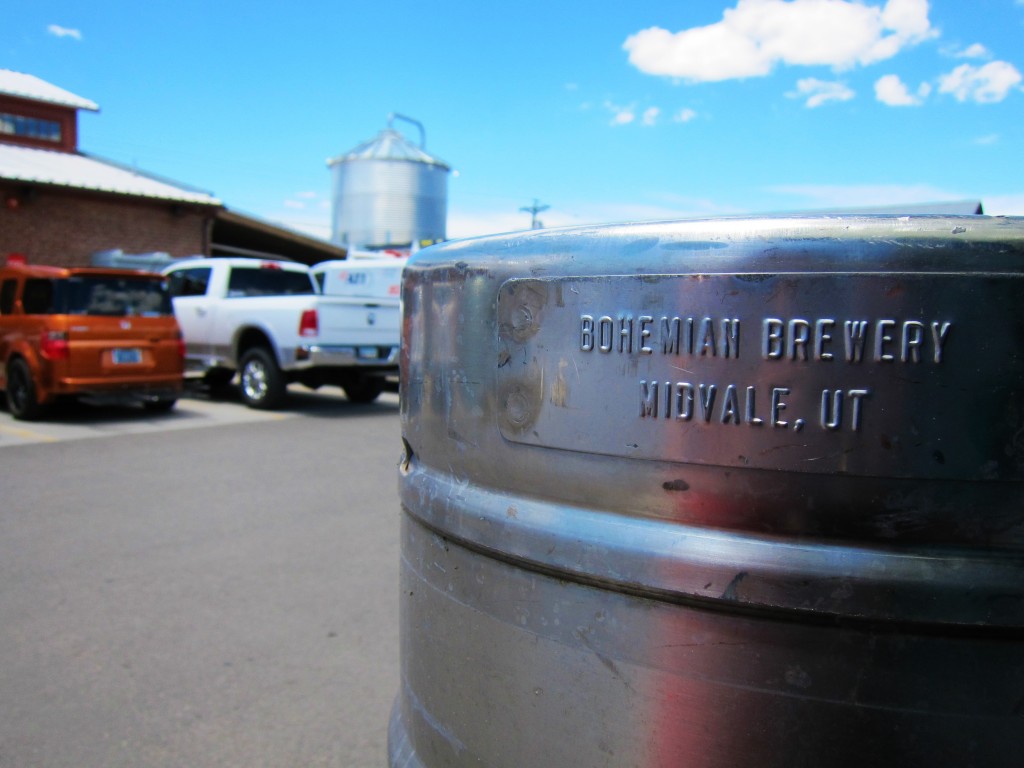