It all started with a phone call. My mom rang me a few months back to ask if I would be attending my sister’s college graduation in Pennsylvania this May. I had just been back home this past October, so it was a bit early for another visit. And yet, it’s not every year your sister graduates from college. So here I am, poking away at my keyboard and sipping a latte in Old City Philadelphia to recall the tales of my family visit turned beer expedition once more. It has been a short trip, but I’ve made it to a brewery here, a beer bar there, and even managed to fit in a latte or two.

This is the recipe for a happy Lauren, and hopefully, an interesting read…

It has been a long time since I’ve seen a bar so abuzz at 6pm. When I rolled up with my nearly overweight suitcase and equally laden backpack, I realized I might need to find another bar to accommodate all my mostly unnecessary crap. I instead pressed on, was able to check my suitcase at the hostess stand, and weaseled my way through the crowd to find a single empty bar stool. Ah, the benefits of traveling solo!

I was surrounded by equal parts corona swigging, tequila smashing bros, and plaid wearing, beard brandishing brewers. The odd occasion that two such clans would meet in the same place was a result of the following: Cinco de Mayo, and the Craft Brewers Conference. What a great crowd to people watch! 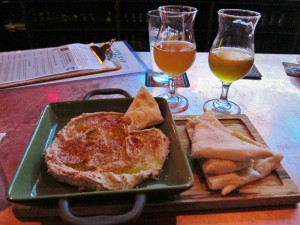 CTH was well staffed, and I received my food and beers in a timely fashion. My ordering skills, however, are something to be improved upon. When I attempted to order two 9%+ beers for myself at the same time (illegal in Utah), I asked, “Is that ok?”. The bartender looked at me with squinted eyes, shrugged her shoulders, and replied, “Whatever makes you happy.” I watched as she told a co-worker. They laughed about it. I can’t blame them! Hah! I’d like to blame my lunacy on the 4.5 hour flight I had spent sandwiched in between a couple that passed magazines over my lap the whole time. Though, I know it’s thanks to my knee-jerk behavior conditioned by Utah’s cruel and unusual liquor laws. This is why I travel. 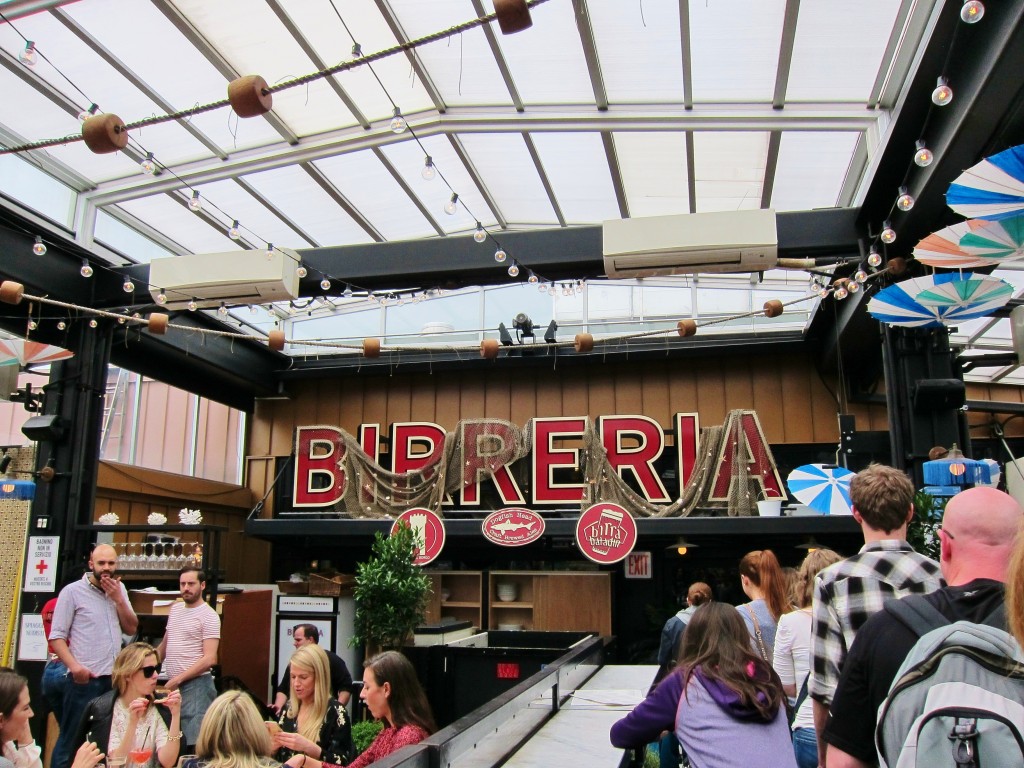 My college friend text me a few weeks back and asked if I wanted to take a NYC beer and brewery bus tour through the city. I replied in the largest font available, “YES!!!”. And so we hopped on the train, mimosas in hand, and made our way into the city for an afternoon of the finest brews the big apple had to offer.

The starting point, Birreria, is nested up on the 18th floor of a NYC skyscraper. This humble 3.5 barrel brewery pumps out Italian-style cask ales in a tropical-like, sunlit atmosphere. Though only 180 feet from the ground, it seems worlds away from the stressful, roaring streets below. 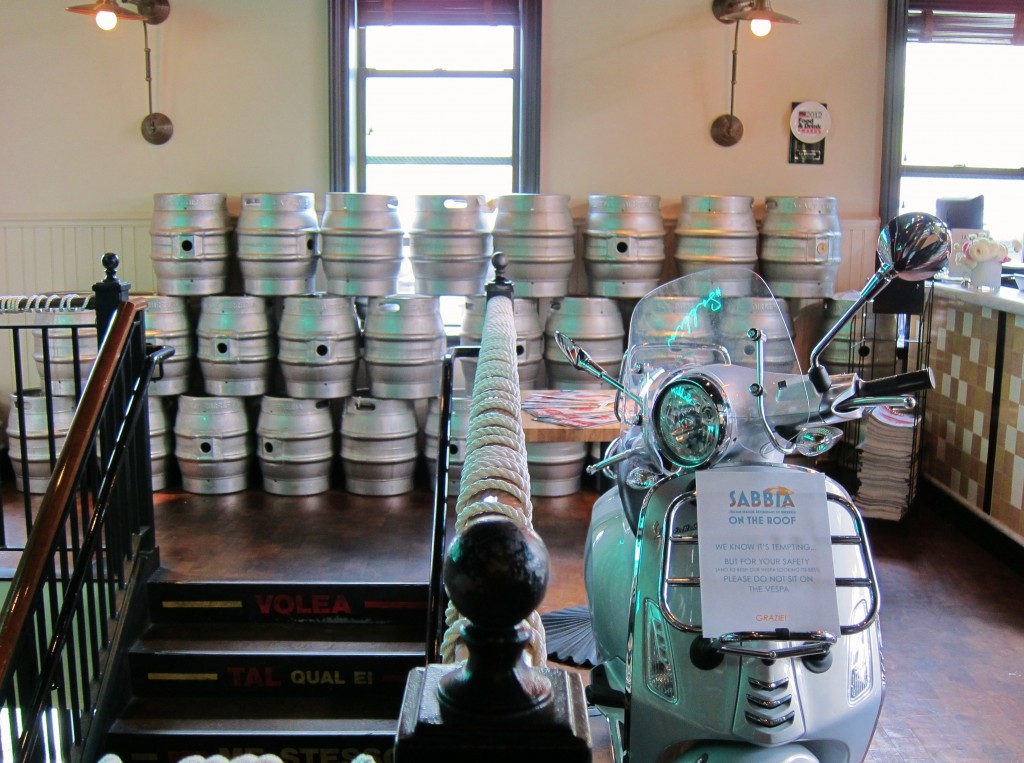 The partially open roof let fresh air into the green-house style room. Fish nets were hanging over the bar and Birraria sign, while buckets full of white flip flops were available for those who truly desired to slip into the coastal feel. I abstained, and instead crammed into the elevator in search of other beers and places to drink them. 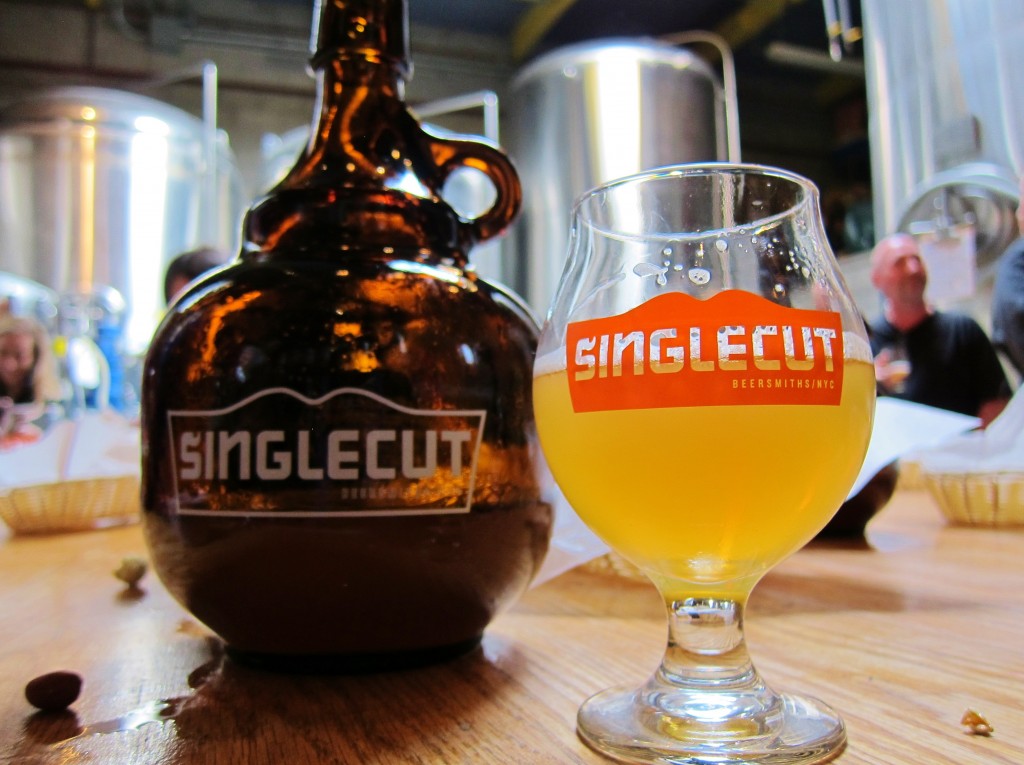 Singlecut was the last stop on our NYC beer tour. There were a few stops in between Birreria and here, and a whole lot of Saturday traffic along the way. When our tour guide announced we had arrived at Singlecut, it seemed the whole bus took part in a sort of half-buzzed yoga. Everyone was stretching and yawning with red eyes, unsure if it would be nicer at the moment to continue drinking, or to continue napping. The former was the popular choice, and we all stumbled our way into the brewery single file.

There’s nothing like stainless steel and fresh beer to get me bright eyed and bushy tailed. I think the other tour-goers shared my sentiments. We were brought into the actual brewery where a giant table of empty glasses and snack food sat waiting for our mouths. A staff member from the brewery followed close behind with beer in hand. Everyone’s eyes seemed to follow the growlers of beer he was toting. I was suddenly very thirsty.

The long awaited beer was passed around family style and everyone poured their own. We were allowed to wander the brewery so long as we didn’t touch anything that was “a white powder or a handle”. That sounds like good advice! 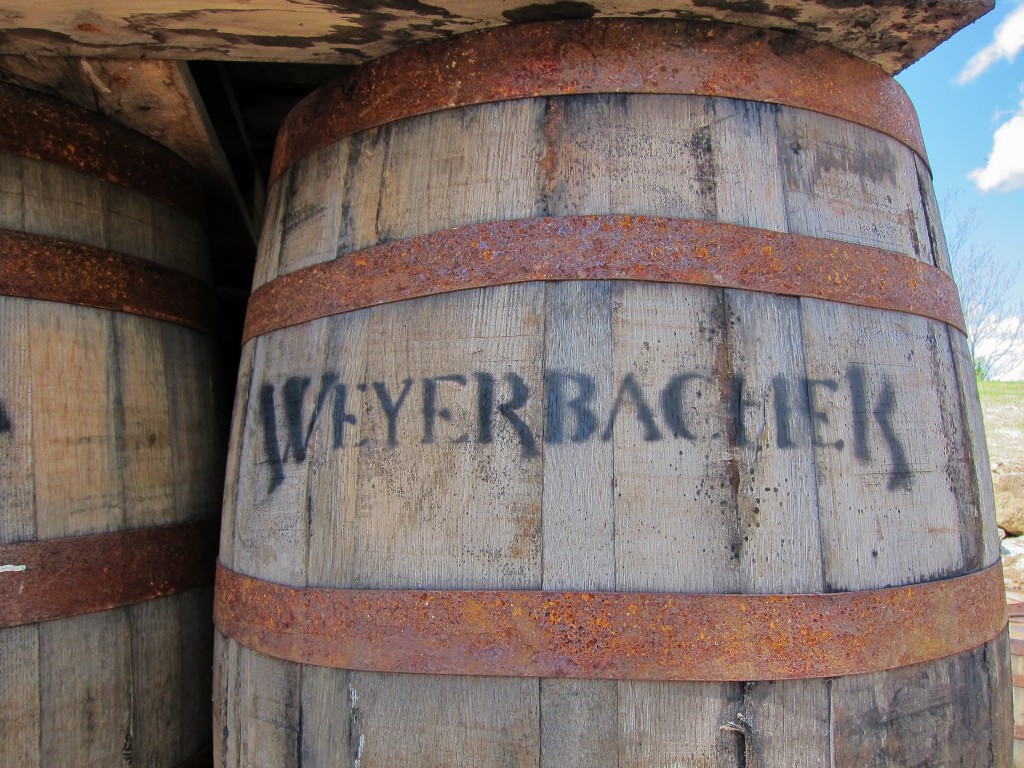 The way I feel about Weyerbacher is the way I feel about watching my niece and nephew grow up. I may not always be around, and they might not remember me very well, but I’ve been watching from afar for years. I can remember when they were itty bitty! There’s a sort of nostalgia that comes with it that makes me feel part of their growth. It makes visiting every so often an event I always look forward to. 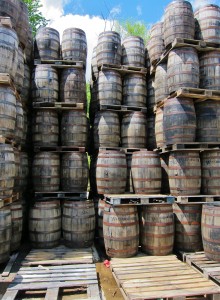 A tall mountain of Weyerbacher branded barrels greeted me in the parking lot when I pulled up. It was a blustery Sunday afternoon, but the barrels didn’t seem bothered. The label art of their latest release, Brünicorn, was neatly decorated on the front entrance – a nice touch! Stepping inside revealed just how monstrous this once tiny brewery has become, something the barrel mountain outside foretold. 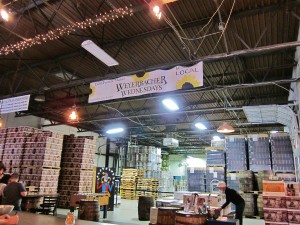 I can actually recall a time when I didn’t like Weyerbacher’s beer. I thought it was too flavorful, and couldn’t get past the Belgian yeast. Hah! The years have helped refine my taste buds, and I’m sure their beer has gotten better too. My, how things have changed! 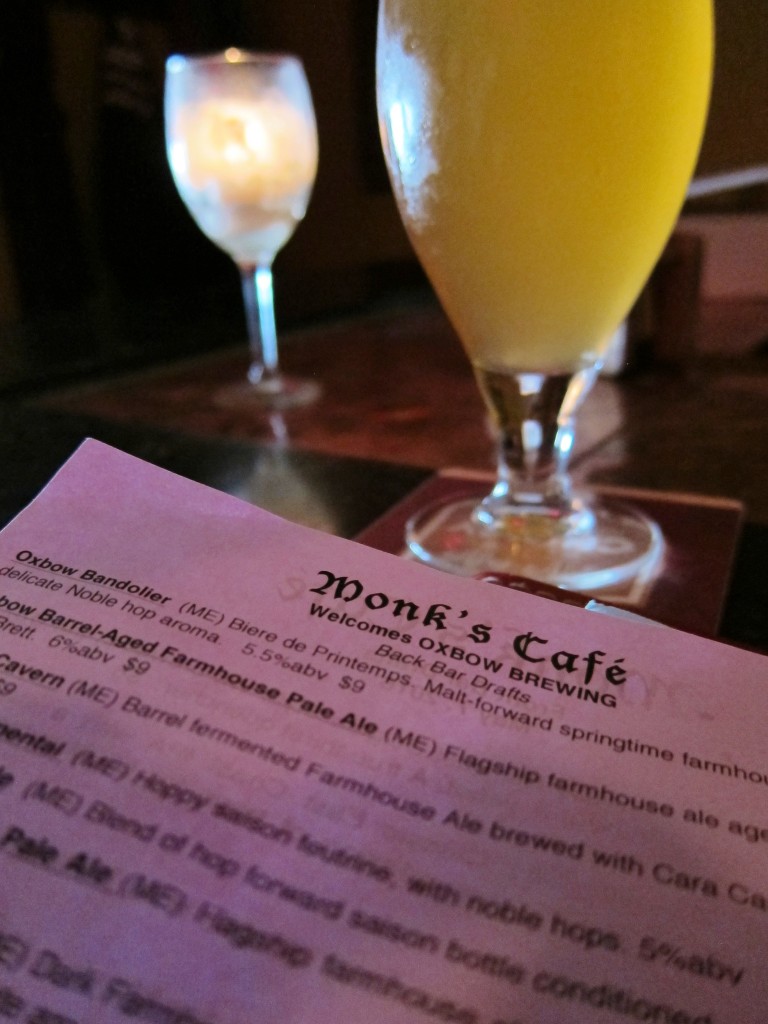 As excited as I am to have visited the previously mentioned beer locations, none of them get my salivary glands juiced up like Monk’s Cafe. It’s the one place I recommend to anyone passing through Philadelphia. Actually, I insist on it. If you’re in town and like beer, but you don’t go to Monk’s Cafe, there is surely something amiss. You must somehow take joy in missing out on the finer things in life.

I’m starting to wonder if this is a Philadelphia thing, or a Belgian thing, but most of the bars I visited were very dimly lit, even during the day. I’m talking dark enough that I reached for my sunglasses when I walked back outside on a rainy day. No matter, the atmosphere was calm and cool. The bar was decorated with tackers and Belgian beer memorabilia. A massive variety of branded glassware hung upside down above the bar, and candles were glowing throughout. As sounds of Coldplay filled the air, I calmly sipped my barrel aged draught beer and thought to myself, “This is the life.”

It wasn’t long before a few locals joined the bar. They settled into their seats like it was an everyday routine. I overheard their conversation with the bartender. “Are they gone? Are things back to normal?” a man asked. “Look around you. What do you think?” his friend replied in a matter-of-fact way. “Yeah, I guess. What was that? A bunch of plumbers or something? A bunch of electricians?” “It was the Craft Beer Conference. And they’re allllll gone now.” Noted the bartender, an air of relief about her. “Oh, so they were beer people? Is that what brewers look like? Beards and jeans and such? …huh.”

I chuckled silently to myself, thinking they weren’t all gone. I was glad to have either blended in enough to look like a local, or have been quiet enough to avoid disturbing the local vibe. Either way, this is the kind of place you want to be in Philadelphia – local or not.

The end of a good trip is always bittersweet. But in the words of someone wise and witty – you can’t miss it if you never leave!

Until next time, Philadelphia. 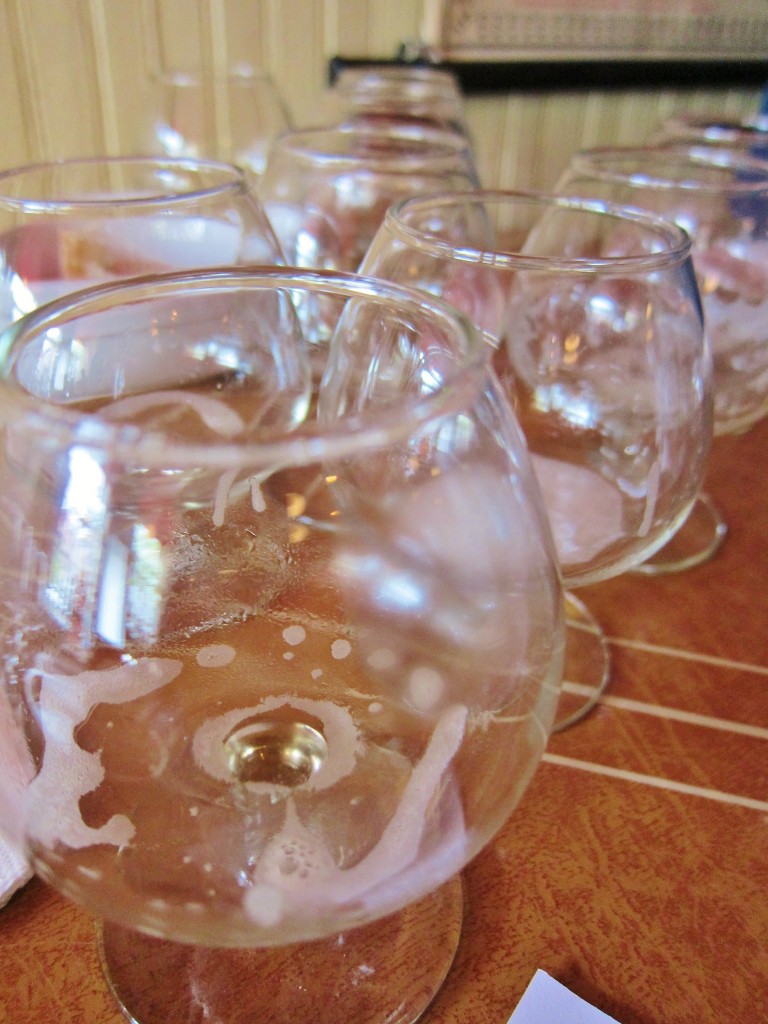