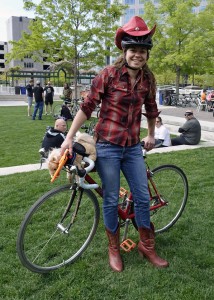 Last Saturday, we Crafty Beer Girls attended our very first Tour de Brewtah. I think it’s safe to say, it won’t be our last. This bike-riding, bar-hopping event took us on a journey through the streets of Salt Lake City like Alice in a wonderland of beer. We came, we saw, we drank, and we burned calories (yay more beer!), all done while wearing costumes. If more fun can be had while tipsy on a bike, please tell me!

Probably the best thing about Tour de Brewtah is the costumes. They weren’t required, but they made the whole thing so much more fun. The theme this year was Adventurers, Explorers and Daredevils, giving us everything from superheroes and cub scouts, to Doc Brown and Marty from Back to the Future. Lauren was a cowgirl complete with a plastic gun, which she made good use of, and a stuffed horse attached to her handlebars. I wore lederhosen with a coil of rope and went as a mountain climber. Someone told me that one year the event fell on May 4th, and the theme was Star Wars. Their group all dressed as Yoda which must have been hilarious to see! 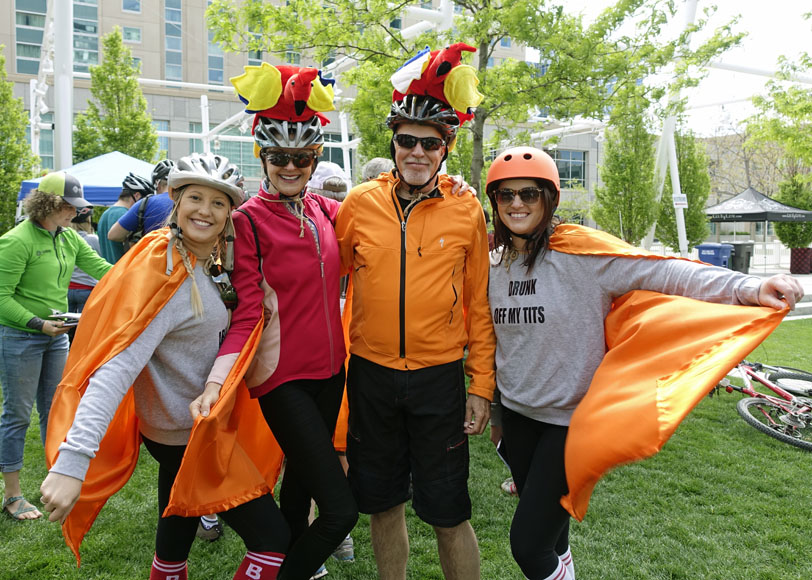 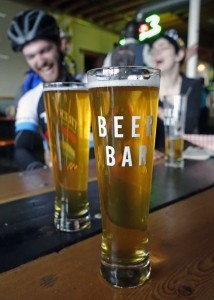 There were 4 different routes to choose from all starting from the Gallivan Center in downtown Salt Lake City, and then ending in the same place for the after party. The longest route was 36 miles and went as far south as Bohemian in Midvale and as far north as The Garage on Beck Street. If you think 36 miles is just too far to ride while drinking, and we did, you could easily choose the shortest route, a 4.5 miler that didn’t leave the downtown area. We ultimately chose to go with one of the medium sized routes, Trail Blazer, at a perfect 9 miles. We stopped at The Taproom (with Epic Brewing), Proper Brewing Co, and the Beer Bar (with Moab Brewing). 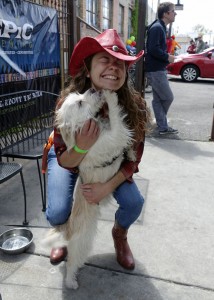 All routes were not specific or guided in any way. Rather, they were just destinations to tick off, and it was up to individuals to decide how to navigate themselves to each stop. A SLC Bikeways map was included in the advance ride information email so riders could plan their routes. We pretty much just winged it and we made it just fine to all of our destinations. When we didn’t take the most direct route, Lauren would say we were “blazing a trail,” and shoot her gun in the air. (Yeah, Lauren is a barrel of laughs!) Lucky for us, we chose the earlier start time for our ride, and arrived at our stops before the majority of the crowds.

At our first stop, The Taproom, we sat outside to drink our beers, and Lauren, who’s a dog lover, made a new four-legged friend. We also made friends and conversation with another small group of people on our route who we met up with later on too. I had a super sloppy burger at our second stop, Proper Brewing. (I really needed a shower after eating that thing!) Then, at Beer Bar, Moab Brewing gave me a sweet roadie cyclist hat which I sported the rest of the day, when I wasn’t wearing my helmet. We also decided to make an extra stop at the Beerhive to say “hi” to our friends from 2 Row Brewing who were serving beer for another route. Everywhere we went it was a delight to see the menagerie of clever costumes and happy, beer-drinking people. 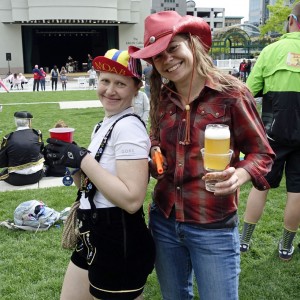 By the time we reached the Gallivan Center for the after party, we were feeling pretty darn good. There was a free bike valet and plenty more beer to be had. A band and food trucks were there for maximum party enjoyment. The hardest part? Knowing when enough fun is enough! Riding your bike while drunk-off-your-ass isn’t the safest thing. Trax is a great option, especially for those who don’t live in the vicinity of downtown. I recommend bringing a hydration pack (don’t forget to actually drink the water) with space for the swag you may pick up at each stop. Carry items you need, but pack light. You won’t want to have to keep track of too many things. Bring your friends, the more the merrier, and have a smashing good time!

We’re already looking forward to next year and we hope you’ll plan to join us! Check out the Tour de Brewtah 2016 photo gallery on our Facebook Page. Feel free to tag yourselves and your friends!