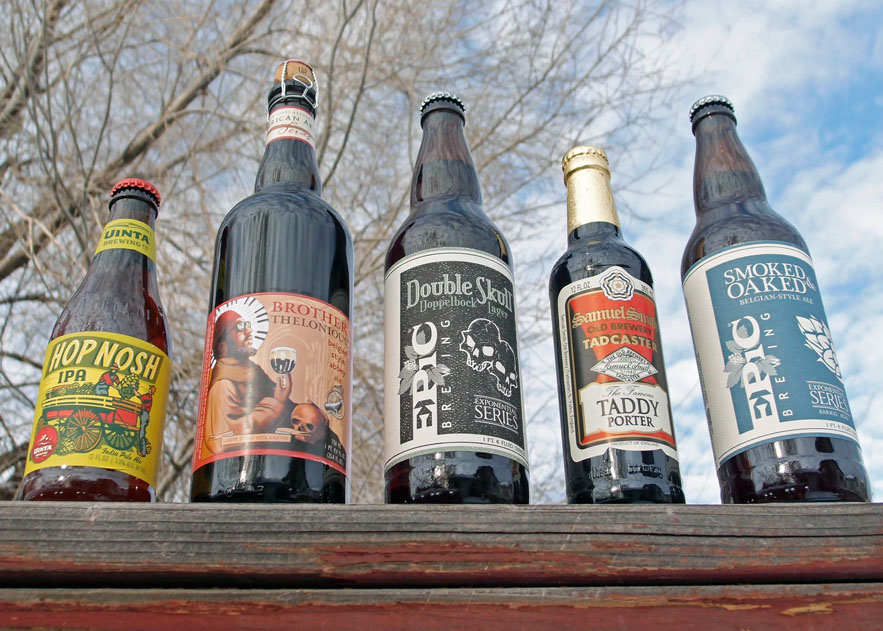 Welcome to Crafty Beer Girls’ beer and cheese pairing! We teamed up with Utah grocery store chain, Harmons, and Solstice Chocolate to bring you five great pairings and a little chocolate for dessert! 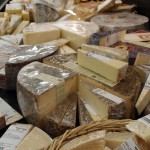 Harmons is known for quality, its devotion to local brands, and its extensive cheese selection, among other things. The largest collections of cheese can be found at the Bangerter, City Creek, Midvale 7th Street, and Station Park locations. Andy Fitzgerrel, the lead cheesemonger at the Midvale store, planned some amazing pairings for you to try at home.  Andy has years of experience as a cheese buyer and teaching cheese classes so trust me when I say, he really know’s his stuff!  He also happens to love beer and was more than happy to help us with this pairing.

Here are a few tips to keep in mind while enjoying your beer and cheese.

Winter is a good time for aged cheeses and heavier, more flavorful beers. In general, you’ll want to start with the mildest flavors and work your way to the stronger ones. We’ll start with an IPA and work our way to beer selections that have a heavier malt character and more lingering finish. 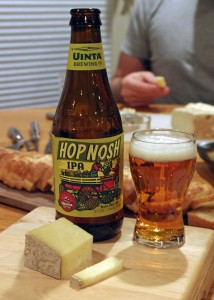 Cheese:  Landaff, a Welsh style cheese similar to cheddar, made with raw cow’s milk.  Crafted by the Erb family in New Hampshire, this cheese is then aged for 3-4 months in the cellars of Jasper Hill Farms in Vermont. It has a natural rind, acidic notes and butter tones with a lactic tang like buttermilk. Notice the dense mouthfeel, curd-like texture, earthy backbone, and hints of white mushroom, cave, and wood.

Beer:  Hop Nosh IPA from Uinta Brewing in Salt Lake City, Utah. This hoppy beer goes well with the cheddar style. The Galaxy hops give it citrus notes that don’t overpower the cheese and bring out the cream. The fattiness of the cheese dulls the bitterness of the beer allowing the hops to shine through. 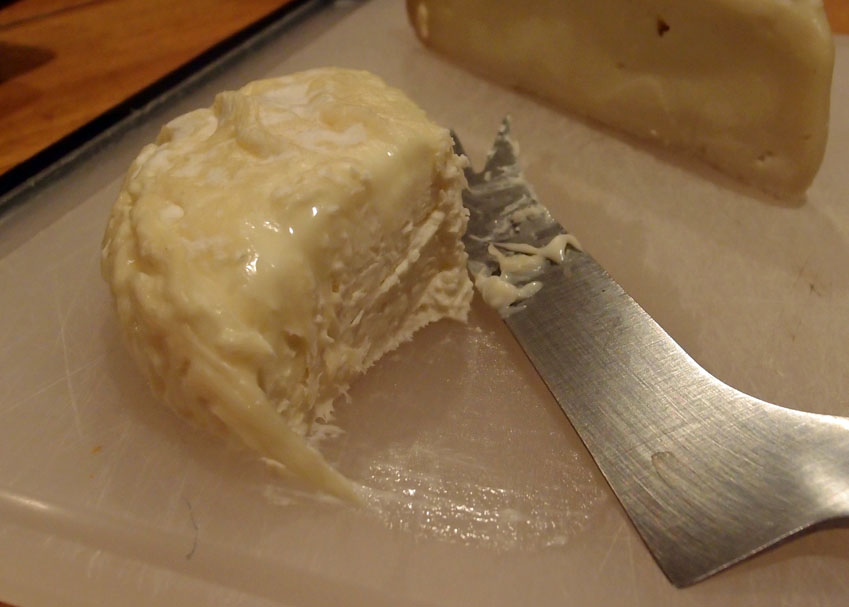 Cheese:  Rocchetta from Cuneo, the Piedmont region of NW Italy. This is a three-milk cheese (cow, goat, and sheep) from Caseficio Dell’alta Langa. It has a natural rind, a soft, creamy, gelato-like texture, and is aged for just 10 days. This cheese is flavorful, but mild. 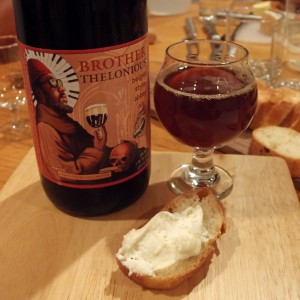 Beer:  Brother Theloneus from North Coast Brewing in Fort Bragg on the Mendocino California coast. This beer is fruit driven and has a sweetness to it that brings out the cream and a bit of smokiness in the cheese. This pairing is a little counterintuitive because the beer has a lot of flavor. It could overpower the cheese, but it doesn’t. Take our word for it and give it a try.

Interestingly, the effervescence of sparkling wines or beer scrubs the fat from the tongue. 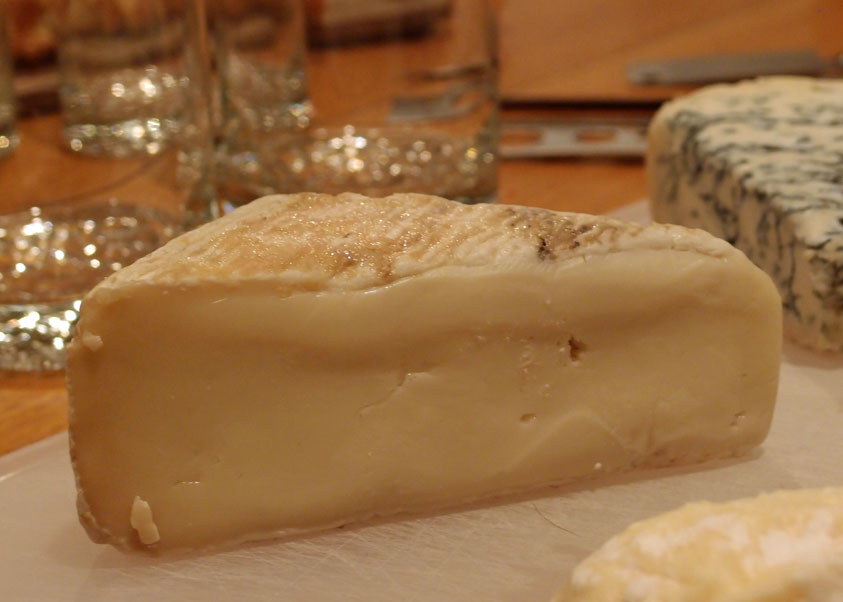 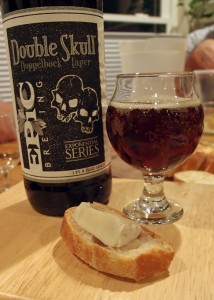 Cheese:  Taleggio from the appellation of Lombardy, Italy. This cheese has a wash (bacterial) rind which means it was washed in alcohol, wine, beer, liquor, brine, or a morge (bacteria, salt). This famous Italian “stinky cheese” is aged for 50-60 days and has a funky, strong flavor with creamy undertones and a salty (tidepool) aroma.

Beer:  Double Skull Doppelbock Lager from Epic Brewing in Salt Lake City, Utah. This beer has a sweet, fig undercurrent that plays well with the saltiness of the rind. Additionally, the cheese brings out the fruit flavors in the beer. 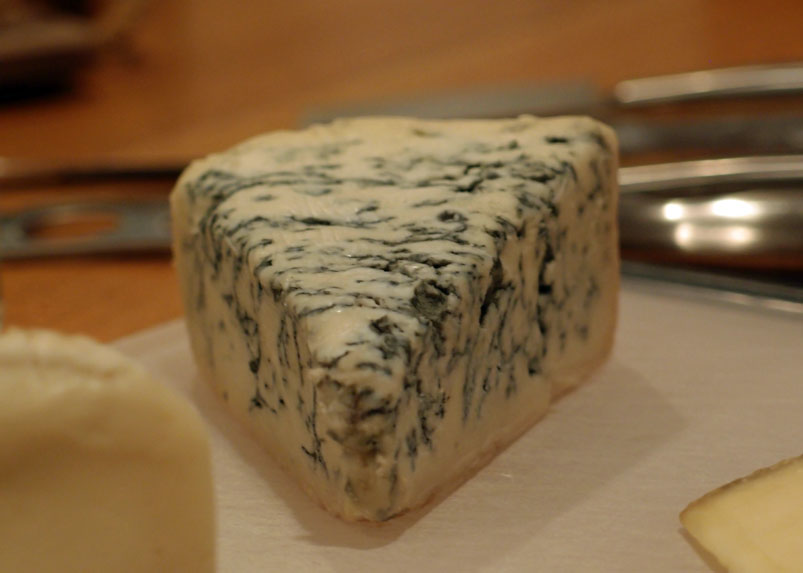 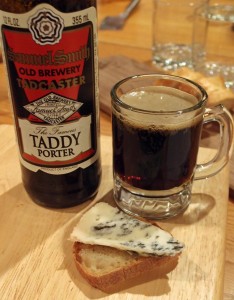 Cheese:  Gorgonzola, the classic Italian bleu from Lombardy (Igor brand). Another wash rind cheese, it is considered picante (strong, more developed in flavor), and coats the mouth.  The veins of mold are created by piercing the cheese after it sets to let more oxygen in.

Beer:  Taddy Porter from Samuel Smith. This beer has a chocolaty sweetness that works well with the salt in the cheese.  Other chocolate forward porters and stouts as well as barley wine would also work with this Gorgonzola.

We also tried Solstice “Uganda” Chocolate with the Gorgonzola cheese and loved it! 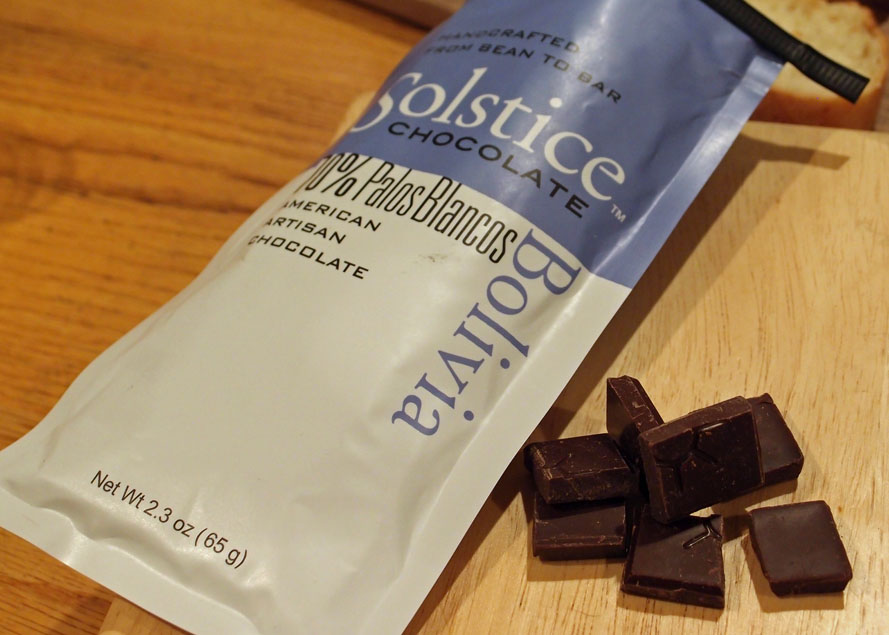 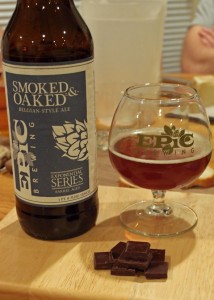 Speaking of chocolate, we did something a little different courtesy of local chocolate maker Solstice. Scott Querry, the man behind Solstice, feels that besides whiskey, beer is the best thing you can pair with chocolate. And yes, that means it is better than wine. Sorry, wine lovers!

Chocolate:  Bolivia from Solstice Chocolate is 70% Palos Blancos, a wild harvest bean the size and shape of a garbanzo bean. It’s a deep, rich chocolate with subtle notes of nuts, honey, and fresh cream.

All of our chosen cheeses were supplied by Harmons and the beer is available either at local Utah breweries or in State Liquor stores. Look for Solstice chocolate at Harmons as well as Whole Foods, Caputo’s, Liberty Heights Fresh, Publik Coffee Roasters, and other local coffee shops. We had so much fun with this, we’re looking forward to doing a summer edition in a few months! Special thanks to Harmons, Andy Fitzgerrel, and Scott Querry of Solstice Chocolate for this amazing beer, cheese, and chocolate pairing. Let us know how yours goes!