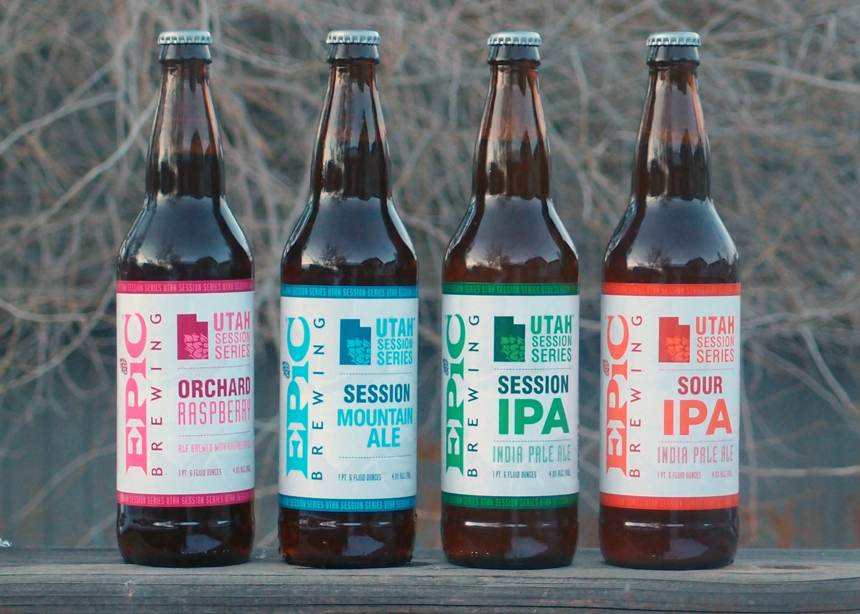 In 2008, a change to Utah’s liquor laws allowed Utah breweries to sell full-strength (above 4% ABV) beer directly to the public. This change made it possible for patrons to buy strong beer direct, cold and fresh, and avoid the State Liquor Store where all beer is held at room temperature. To craft brewers, this was a very welcome change, and it prompted David Cole and Peter Erickson to open Epic Brewing in 2010. Epic’s mission was to brew only strong beer in small batches. Recently, Epic Brewing broke with their own tradition to launch a brand new line of 4% ABV beer. The Utah Session Series has turned up on tap in local bars and now in Utah’s grocery stores!

This isn’t the first time Epic Brewing has made 4% ABV (3.2% ABW) beer. In 2013, the Annex, a brewpub and eatery, opened in Salt Lake City’s Sugarhouse area. Their tiny on-site brewery at that location started producing, exclusively for the Annex, a nice variety of draft beer, which by law cannot be above the 4% limit. Until now, the only beer Epic bottled was their extensive line of full-strength beers produced at the downtown location.

Riffing on their Annex draft offerings as well as other full-strength styles, Epic has developed this new Utah Session Series which expands their reach into the greater 4% grocery store and draft beer market. In Epic fashion, they have about 18 different options currently in development giving beer drinkers plenty to choose from. Here’s the lowdown on styles you’ll find as the new beers roll out this year.

Look for these classic styles no matter the season!

These classic styles will rotate.

There aren’t many sour beers available in Utah grocery stores, so this is a pretty big deal. Both of these Sours are superb!

These beers will be brewed with 100% natural seasonal fruit purees.

Nitro treated beer will not be bottled, but any bar with a nitro tap available may have one of these Epic beers.

Irish Red – Caramel malt with a touch of toast. An understated beer that focuses on the malts, but is bitter enough not to seem sweet. Silky, yet dry mouthfeel. Food pairing: Chicken, seafood, beef, and sweet desserts.

Epic is also working on an Orchard Farmhouse Apple, a Sour Lime Gose, and a hoppy Brown Ale to add into the mix. So many fantastic options! There really is a beer for everyone in Epic’s Utah Session Series proving that even though they expanded to Colorado, they really love their Utah roots.

Note: Epic did produce a line of 4% beer called “Unsacred”, but this is the first time Epic has made 4% beer under their own label.