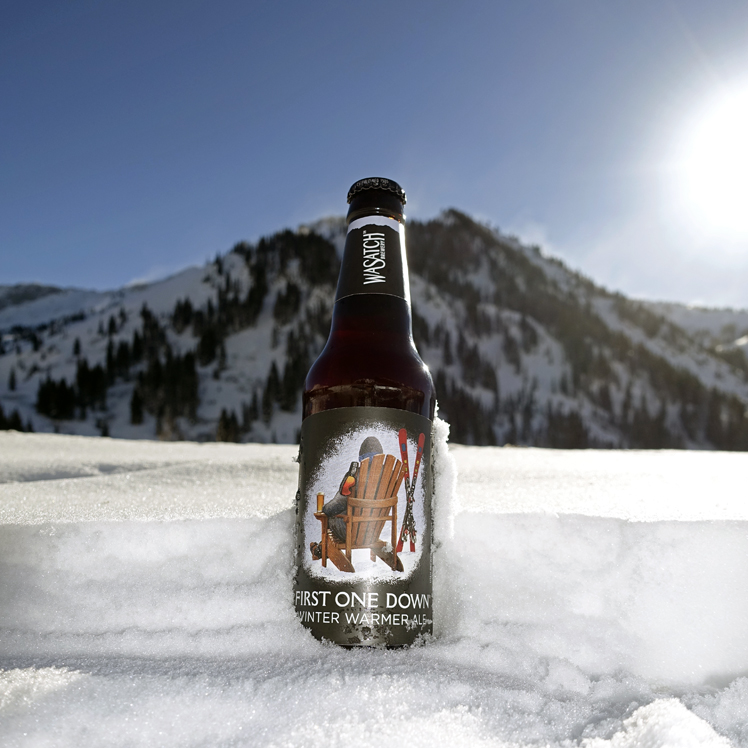 What’s better than enjoying the famous Utah snow? Nada! But, the best compliment to a great day at one of Utah’s ski resorts is a well-earned beer. You may think this isn’t the place for good beer, but I promise you’re wrong. Yes, all of our draft beer is only 4% ABV, but with the higher altitudes and the need to keep your wits about you while skiing or snowboarding, you might be glad it’s not full-strength. We locals lovingly refer to it as “sport beer”, but that doesn’t mean we don’t drink the higher octane stuff too. When the day is through, all bets are off! If you’re planning to do a little recreating this winter in the Beehive State, this skier’s guide to beer in Utah is for you.

There are two parts: Beers and Bars. For Beers, keep reading. To skip straight to Bars, click here.

Local Brewers: Look for these local brews at Utah ski resorts, grocery stores, and brewery locations. If the weather is nice, consider packing a cooler and a few lawn chairs for a little après ski tailgating session! For above 4% ABV beer, buy bottles fresh direct from the brewery, or check out the nearest State Liquor Store. Grocery/convenience stores carry only 4% ABV “sport” beer.

One of my “go to” beers is Uinta’s Cutthroat Pale Ale on draft in numerous places. You’ll also find Yard Sale Winter Lager widely distributed throughout the resorts. It’s a tasty beer to go with your ski lunch! Also a good choice from Uinta is the organic Baba Black Lager. Smooth and flavorful, it’s great one to fill your pitcher with and share with friends. If you’re at Brighton Resort, look for Brighton IPA on tap at the Milly Chalet. At Snowbasin, try a 75th Anniversary Amber Rye Ale. Uinta does have a brew pub located on the west side of Salt Lake City where you can enjoy food and taste all the beer they have to offer, including full-strength offerings like Dubhe Imperial Black IPA (pictured) or Detour Double IPA (both awesome!). You can buy bottles in their General Store, but much of their beer is also available in local convenience stores.

First One Down by Wasatch is one of my favorite winter warmer ales! It’s rich, malty, and very smooth, but it’s 7.1% so save it for après ski. Wasatch Polygamy Porter, Bobsled Brown Ale and Squatters Chasing Tail Golden Ale can usually be spotted around the resorts. Like Uinta, both Squatters and Wasatch make local resort brand beer. If you’re at Solitude, look for Solitude Mountain Lager and Rescue Dog Brown Ale, both by Wasatch. A Dunkelweizen beer made by Squatters for Snowbird is on theme with Oktoberfest held each year at that resort. Besides being widely distributed in grocery and convenience stores, Wasatch and Squatters each have restaurant/pub locations in Park City and in the Salt Lake valley. When in Salt Lake, visit their Beer Store where there is a nice selection of all Wasatch and Squatters beer, including First One Down Winter Warmer and the new full-strength nitro bottles of Polygamy Porter.

This brewery focuses on lagers made in the old tradition. I often see Cherny Bock, a dark lager (my personal favorite), and their Czech style Pilsner on tap or in cans at many of the resorts. Bohemian beer comes in cans, which makes them a convenient buy for coolers. Find them cold and fresh at their brewery in Midvale, in grocery stores, and full-strength options at the State Liquor Store. Visit the brewery for amazing old world style food; think Pierogies and Brats, Potato Pancakes, and Goulash. The location is convenient to both Big and Little Cottonwood Canyons and those staying toward the south end of the valley.

You won’t be able to visit this brewery while skiing, but you’ll find their brightly colored full-pint cans available at most any Utah ski resort and grocery store.  A red and white striped can of Johnny’s IPA is one of my favorites! Keep your eyes open for Dead Horse Amber available in cans and on draft, as well as handles of Porcupine Pilsner.

Epic is known for its full-strength beer in 22 oz. bombers, but they have recently launched a line of 4% session beer that has started to show up on tap at many bars. I found the Sour IPA at Solitude’s Argenta Pub and the bar at Alta Peruvian Lodge. It’s really something special! You’ll also find a good selection of Epic bottles at bars that sell full-strength options. If you want to sample more, check out Epic’s restaurant, The Annex, or their brewery in Salt Lake.

Although I haven’t seen Red Rock beer up at the ski resorts, you can find it at many bars, and their brewpub restaurants are definitely one of my favorite places to eat and drink great beer! They have locations in Park City, Downtown Salt Lake, and closer to the Cottonwood Canyons at Fashion Place Mall. For winter, I highly recommend Drioma Russian Imperial Stout and, if you’re a fan of IPAs, don’t forget to try an Elephino! You can also find select Red Rock beer at Harmon’s Grocery locations, and a full selection  in their beer store at the north end of Salt Lake City.

If you happen to be skiing Snowbasin or Powder Mountain, you may want to stop for dinner in Ogden at Roosters. They make a nice selection of local brews including their 20th anniversary Chanticleer Belgian style rye ale and a very nice Honey Wheat. The food is good too!

Every resort has a bar or two. Some just serve beer; others serve all sorts of drinks. In Park City, you’ll find an abundance of bars and a rich nightlife. But, if you’re here to ski, you’ll want to focus on the resorts located in the Cottonwood Canyons just outside of Salt Lake City: Alta, Snowbird, Brighton, and Solitude. These humble resorts don’t cater to late night partying the same way Park City does, but you’ll get the best snow and the best terrain available in Utah, with fewer crowds. You may sacrifice some nightlife, but you’ll still have access to beer and liquor, and there is definitely a local après scene to participate in! For a good time, check out these bars.

Sitzmark Club – Traditional ski bar, “Party Margs”, beer, fireplace. Located at the Alta Lodge and may at times be limited to guests only.

The Thirsty Squirrel – Full bar, appetizers, located in the village near lodging.

Library Bar – Upscale, full bar, intimate lounge with oversized chairs, located in the village at the Inn at Solitude.

Silver Fork Lodge – Located in Big Cottonwood Canyon on the way to and from Solitude and Brighton resorts. Restaurant serves breakfast, lunch, dinner and full selection of beer, wine, and spirits. Free shuttle provided for guests of Brighton and Solitude.