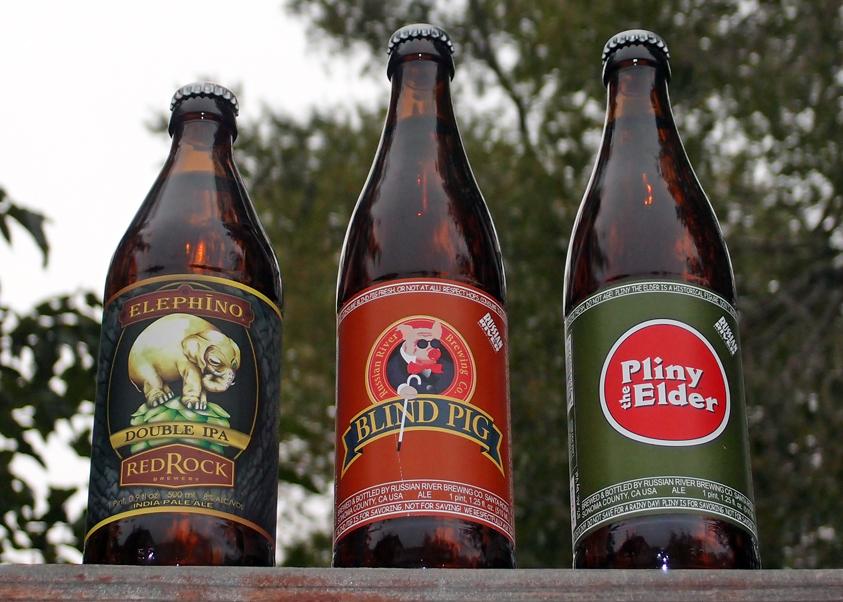 In August, I published my Pliny the Elder vs Elephino taste-off results. If you missed it, you can read all about it here. Of course, everyone has their own preference, but one comment I received more than once referred to folks liking an IPA called “Blind Pig” better than Pliny the Elder. Since I’d never tried this Blind Pig, I couldn’t really say whether I agreed, but I was certainly curious. Fortunately, a friend of mine happened to be traveling in California and visited Russian River Brewing where they make both Pliny the Elder and Blind Pig. To my delight, he brought back a nice shiny bottle of each and presented them to me. What a good friend!  Thanks, Nick! And so a rematch was commissioned.

In my world, Pliny the Elder has had a bit of a rivalry with a hometown favorite of mine, Elephino, brewed by Utah’s own Red Rock Brewing Co. Because my husband is from the Bay Area near the brewing site of Pliny the Elder, I hear a lot of talk about how wonderful this beer is from friends of his back in California. After trying it, I always maintained that the Utah brewed Elephino is just as good if not better. I was able to test out that theory this year when I did side by side tastings of the rival brews. I was surprised to find a lot of similarities between them. These are truly matched competitors! The differences come down to personal preference, mostly. I call it a draw. 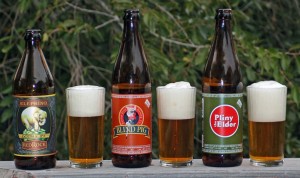 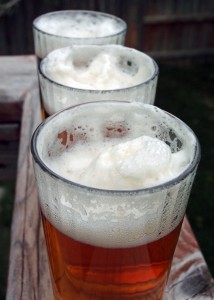 Ready for the Blind Pig/Pliny/Elephino three-way? The ménage a trois happened on October 28th. Contestant #1, Pliny the Elder, was dated 8/21/15. Contestant #2, Elephino, dated 10/17/2015, and last but not least, the challenger, Blind Pig, dated 8/26/2015. As usual, the Russian River beer is not as fresh. It can be hard to acquire even in California, much less Utah. So, I work with what I have and give the benefit of the doubt. The important thing to note here is that one of these beers is not like the others. While Pliny the Elder and Elephino are both double IPAs weighing in at a congruous 8% abv, Blind Pig is a single IPA and a less potent 6.25% abv. And when it comes to aroma and flavor, it’s like comparing apples to oranges.

Blind Pig is a good IPA with notes of citrus, pine, fresh grass and a muted caramel malt character. It doesn’t have the tropical fruit notes or the strong malt backbone you find in Pliny the Elder and Elephino which sets it apart from the other two. Both Russian River brews pour with a much creamier and more substantial head than does the Elephino, and they both have a stronger bitter finish. Elephino is the sweetest of the three. I happen to love the bit of sweetness which is why I prefer Elephino over Pliny the Elder or Blind Pig. But, not everyone agrees with me. 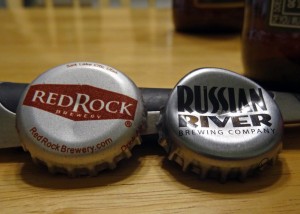 The first week of November, Phil, a friend from Santa Cruz, visited and wanted to do his own Pliny vs Elephino tasting. His bottle of Pliny the Elder was dated 9/30/2015 and was paired with an Elephino dated 10/19/15 for our November 5th tasting. Phil regularly drinks both Pliny the Elder and Blind Pig. He felt that Elephino, though good, is a bit too malty for him. Just for fun, I threw a 3rd double IPA into the mix, our local Random IPA from 2 Row Brewing. The latest recipe matches up quite well to Pliny the Elder and Elephino! Phil liked the Random IPA better than Elephino, and I can’t blame him. Random is a really well balanced double IPA!

It’s been quite the adventure sizing up these beers! The similarities and the differences made tasting them side by side really interesting. Pliny the Elder, Blind Pig, Elephino, and Random are all great IPAs! Which one comes out on top depends entirely on the taster. Why not do a tasting of your own? We’d love to hear what your favorites are! 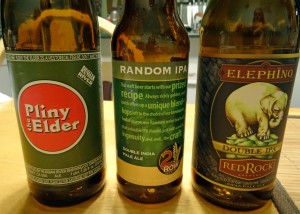