Back for more, eh? If you missed part one, you can read it here. Been there, done that, and ready for part two? Then grab a beer and let’s get to it! 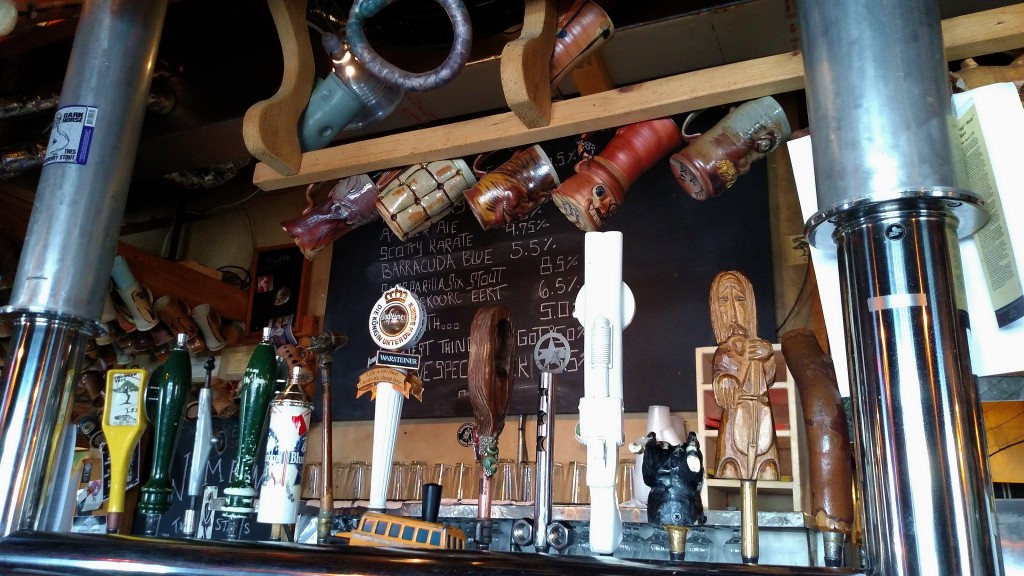 Dark Horse is one of those small town breweries turned hot spot thanks to the History Channel documentary Dark Horse Nation. I hadn’t know about the show until a local a few bar stools down told me about it. He also gave me a personal history lesson on the brewery, noting the doors used as tables and the expansion in the back. It seems he was there through it all. He also told me I arrived at the best time, about 2pm, in between the lunch and dinner rushes when all the tourists flood in. I found it kind of funny he freely shared his wealth of knowledge with the very type of person he was trying to avoid. He was such a nice guy.

The staff bantered back and forth with the locals about different gossip, and how this girl complained about the size of her beer the other night. She was later found passed out drunk on the toilet… heh. It didn’t feel like a big time TV show kind of place, and I’m sure that’s part of the draw. With weathered odd-ball handles on the taps and stoneware mugs lining the ceiling, it wasn’t hard to feel at home.

And the beer wasn’t bad, either! They’re perhaps best known for their Crooked Tree IPA, but I found Scotty Karate Scotch Ale and Sasparilla 6 Stout to be the most distinctive. Stop by their general store/skate shop across the parking lot before you head off. Scary Jesus Rock Star is waiting to rock your soul.

Must Try: Scotty Karate Scotch Ale, Double Crooked Tree IPA, and anything from their Stout Series.

There’s a lot to be jolly for at this Michigan staple! Arriving at about 4pm, I easily found a seat at the bar before the riff-raff of Thursday night set in. Unbeknownst to me, Jolly Pumpkin has two lines of beer – one sour, and one not sour. Perhaps I should have given the non-sour line a chance, but there were too many sour options I simply couldn’t pass on. And so a few moments later, I found a flight of five beers in order of tartness seated neatly in an old barrel stave turned into a flight paddle. Nice touch! Leather, earth, funk, and even odd flavors of arugula and pickles were muddled beneath a growing ache in my mouth that denoted both happiness and severe pH imbalance. How delightful!

The place has a classy, old timey touch, complete with a long mirror above the backbar and dark wood that has been stained more times than I’ve had birthdays. The staff seemed young and ready to make some cash on the night’s rush. The barkeep was very kind, and helped me through the difficulty of selecting some bottles to-go. It was a good time, but I was happy to leave as things began to get busy.

Must Try: Bam Noire Dark Farmhouse Ale, La Roja Flanders Red, and whatever seasonal offerings they have on tap. Oh! And try their non-sour line and tell me how it is. 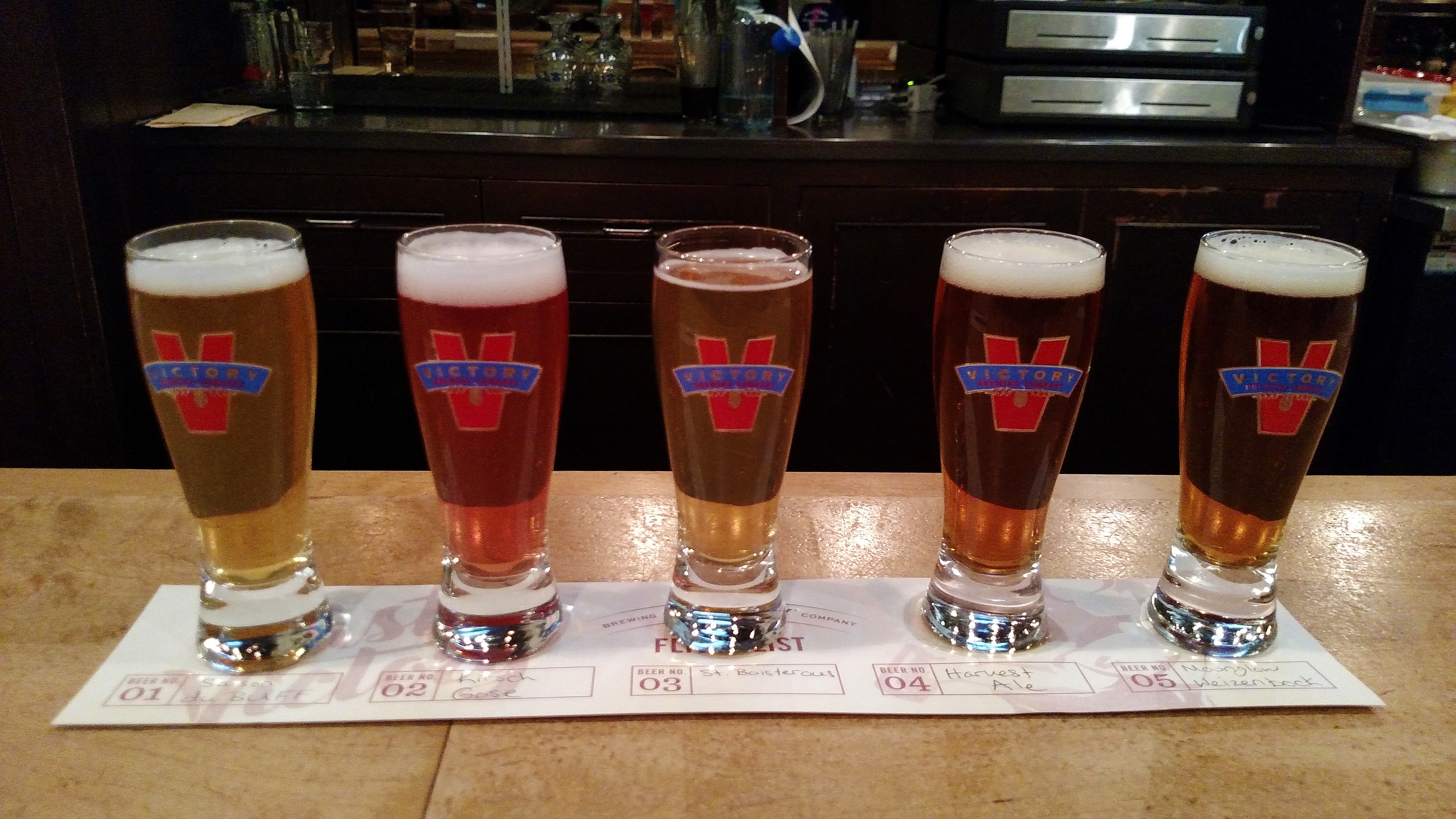 As I drove over the Ohio border and deep into Pennsyltucky, things started feeling more and more like home. It might have been the color of the leaves, or the crisp smell of the air untainted by inversion. But it was probably because the bartender took 5 fewer seconds to check my ID that I haven’t changed since I last lived in PA. It’s fun to feel like a local in a distant place.

I sat down, ID checked lickety-split, flight of beer and soft pretzel dished up in no time – I was a happy gal. I perused right on by the beers they’re known for, and went for the one-offs. My favorite was the St. Boisterous Maibock. It had notes of molasses that reminded me of some historical Philadelphia brews I’ve tasted, along with golden hay, sweet corn, and cinnamon swirl bread. I don’t know exactly what it was, but this one hit home.

Whilst enjoying the Pennsylvania fare, I couldn’t help but notice this place was HUGE, or at least the super tall ceilings made it seem that way. Long banners hung from the industrial rafters, and fat copper kettle tops roosted over the bar. Everything was super clean and modern, with a nod to PA heritage. 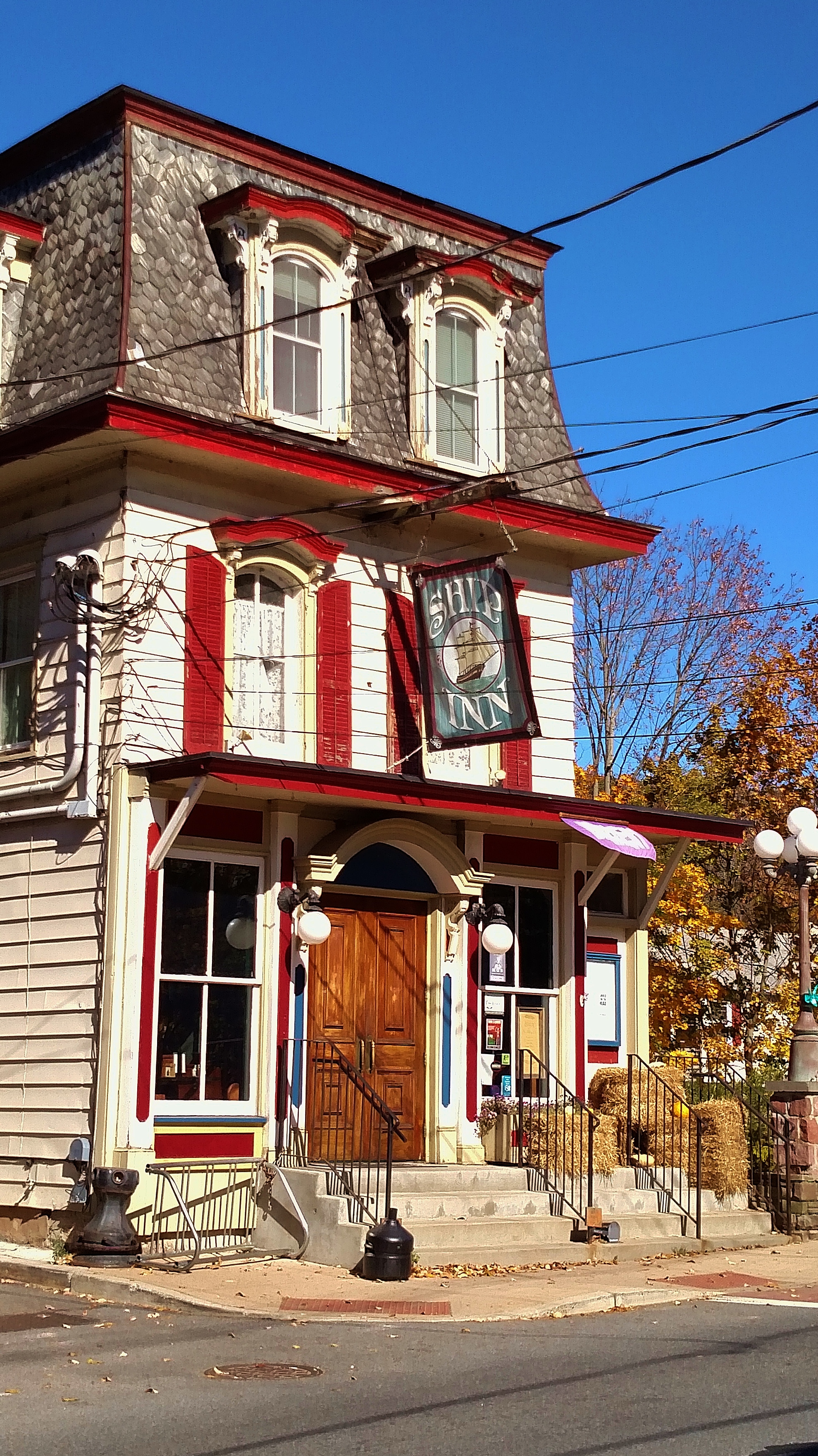 My parents live just a couple towns away from Milford, and for some reason, it never occurred to me that I should check out The Ship Inn during one of my visits. It’s one of those places you pass by a thousand times before you realize you’ve been missing out. When my parents who rarely drink told me they wanted to check out a brewery, I thought it was a good opportunity to give The Ship Inn a chance.

As my parents and I walked in, we weren’t sure if taking a tour was even going to be a possibility. I walked up to the bar and asked about tours, and Tim, who happened to be the second generation owner and brewer, told us he would love to give us a personal tour. Cool! He took us to the back of the pub where a tiny, 7 barrel brewhaus has been fueling the locals since 1995. The kettle was made of brick and copper, and the topless fermentors facilitated open fermentation. It was a gorgeous system!

We ended the tour back at the bar with some samples and a growler to-go. With traditional English brews as their pub specialty, I enjoyed their Best Bitter and ESB. But Killer Bee stole the show with its balanced hop and honey characters. Tim’s huge passion for brewing and his pub was evident in the way he spoke about them. I couldn’t have asked for a better place to show my parents the kind of environment I work in. The next time I’m home, I know where we’ll be going out for dinner. 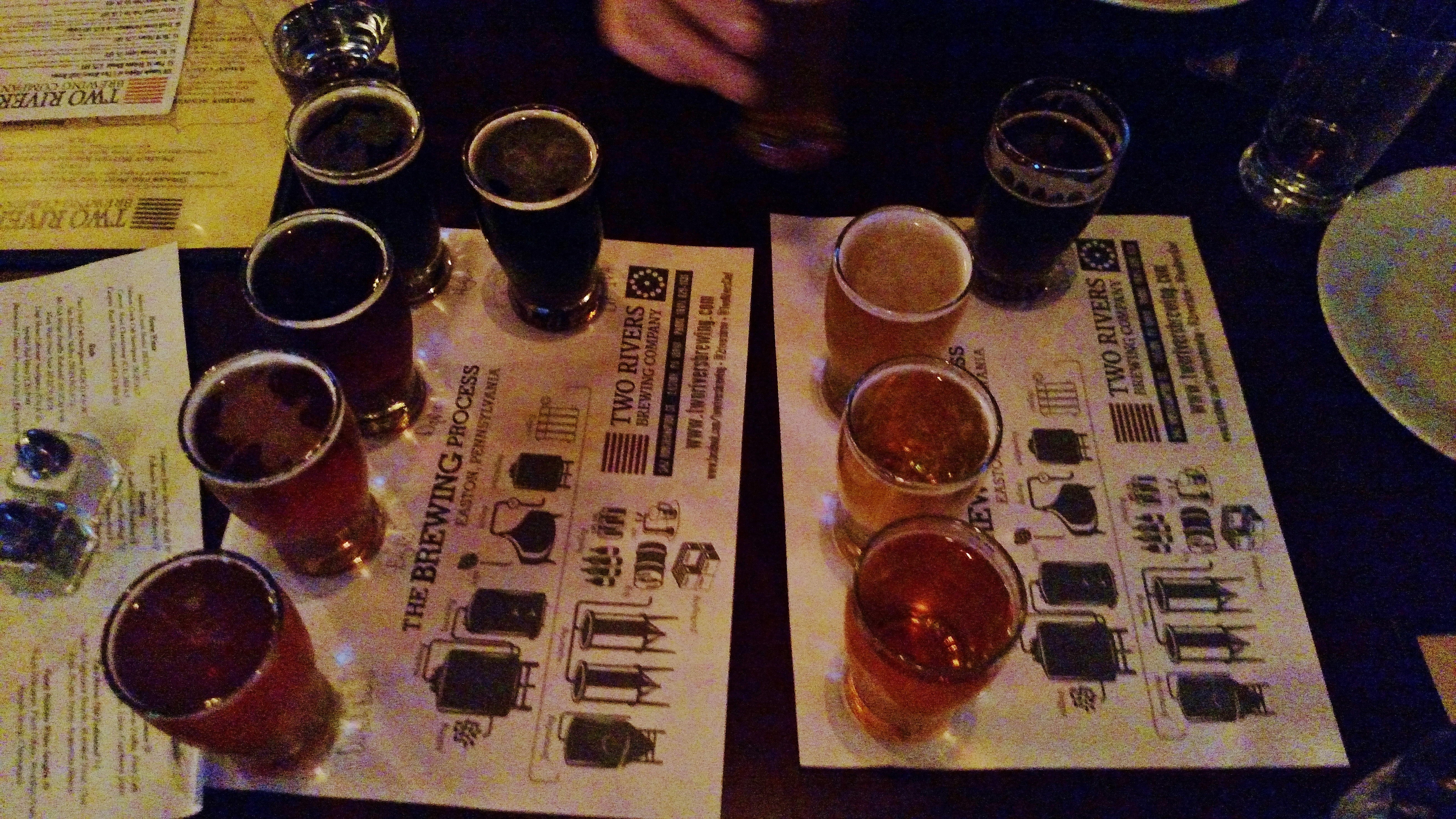 Two Rivers is a brewery near and dear to my heart. Growing up in the area, I often passed by the vacant victorian style building on the street corner and hoped a cool business would move in someday. Fast forward years later, and I hear that a business was, in fact, moving in. But not just any business, it was a BREWERY! Happy days! I watched the construction progress as the months went by, and even got a sneak peek and taste at one point.

When they finally opened, I was stupefied by their food offerings. Duck fat fries? Braised short rib poutine? Free bacon happy hour? YES, PLEASE!!! The only thing missing was their own beer on tap. A few more years went by, and I stopped into Two Rivers on each visit home with hopes of tasting some house brew. Finally, on this very trip, I was able to experience what I had waited so long for! This gave more than enough reason to order two flights.

I may be a little bit biased, but Two Rivers did not disappoint. After tasting 10 of the 13 beers on tap, I was sold. Hogan’s Law Dark Saison is an amazingly complex brew with notes of caramel, toast, and dark fruit. I enjoyed everything else I tasted, but this will definitely be my first pint for next time. I aspire to brew a beer like this someday.

As if top notch food and beer weren’t enough, the whole place is eye candy. Much of the original interior was kept from what was previously the Mt. Vernon Hotel. From the tin ceiling to the Terrazzo floor, this place is more inviting than a hot, home cooked meal on a cold day. Put this one on your must-visit list. 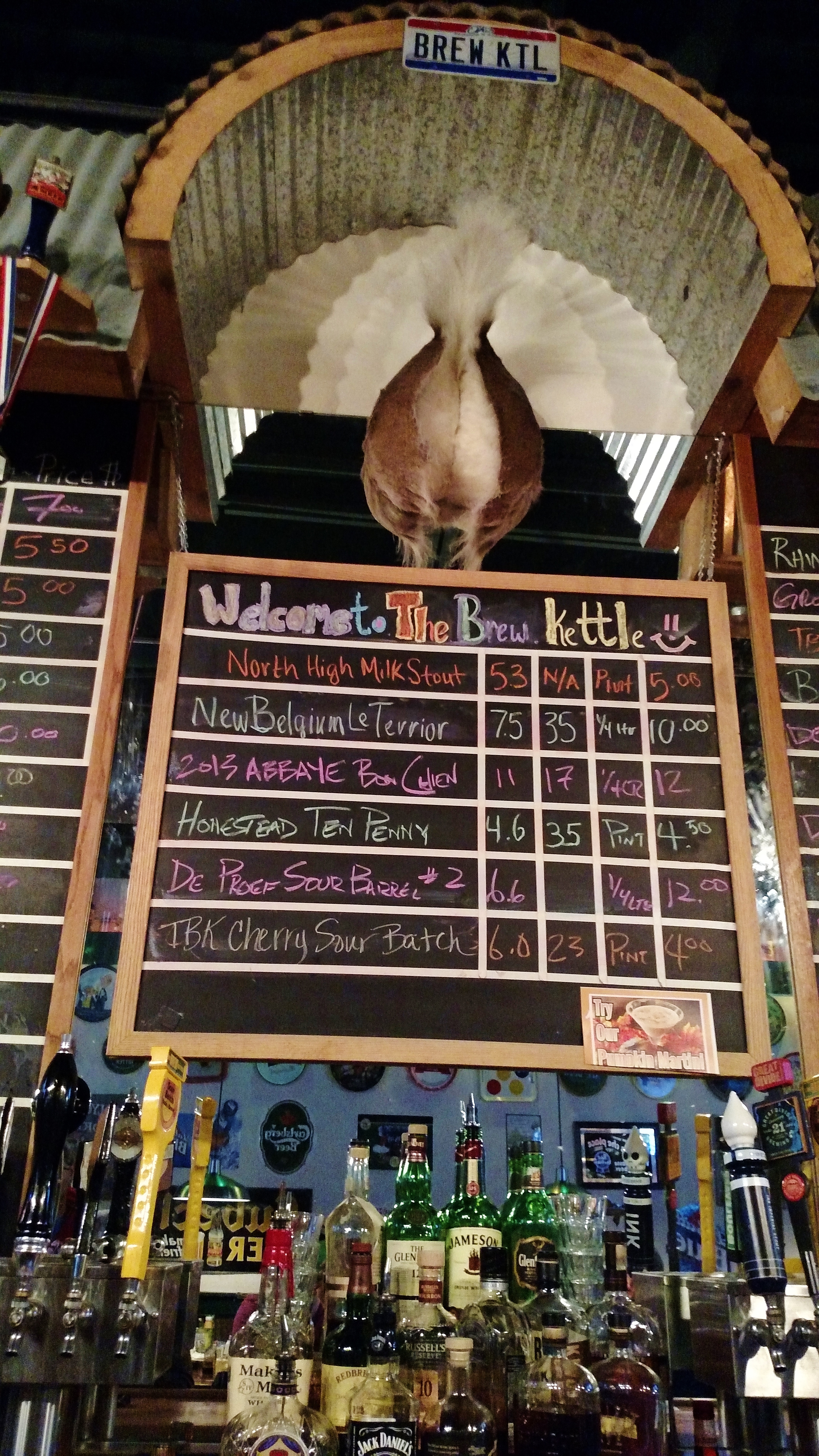 A Sunday night during a football game probably wasn’t the best time to visit this popular Ohio watering hole, but it was a battle I was willing to embrace. I waited about 10 minutes for a bar seat to open up, and then got to work organizing a flight. Their guest taps were well above average, and priced appropriately. There were plenty of bold stouts and sours available mixed in with their own offerings. I would normally go for house beer, but some of their guest taps were too good to pass on.

The Brew Kettle Sour Batch Dude’s Brew surprised the hell out of me. It had moderately tart cherries and raspberries followed by sherry and oak with gently roasted coffee on the finish. Amazing! Guest tap Cerasus Dog by Thirsty Dog Brewing Company blew my mind as well with it’s ability to twist my mouth up in sourness.

The decor felt a little corporate with the walls covered with breweriana, but instead of boasting brands like Bud, Miller, and Coors, they promoted brands like Tripel Karmeliet and Tetley’s. The rear end of a deer mounted above the center bar completed the whole package.

Must Try: Sour Batch Dude’s Brew, White Rajah IPA, Winter Warmer, and anything on the more expensive side for guest taps. They seem to be priced appropriately for rarity and deliciousness! 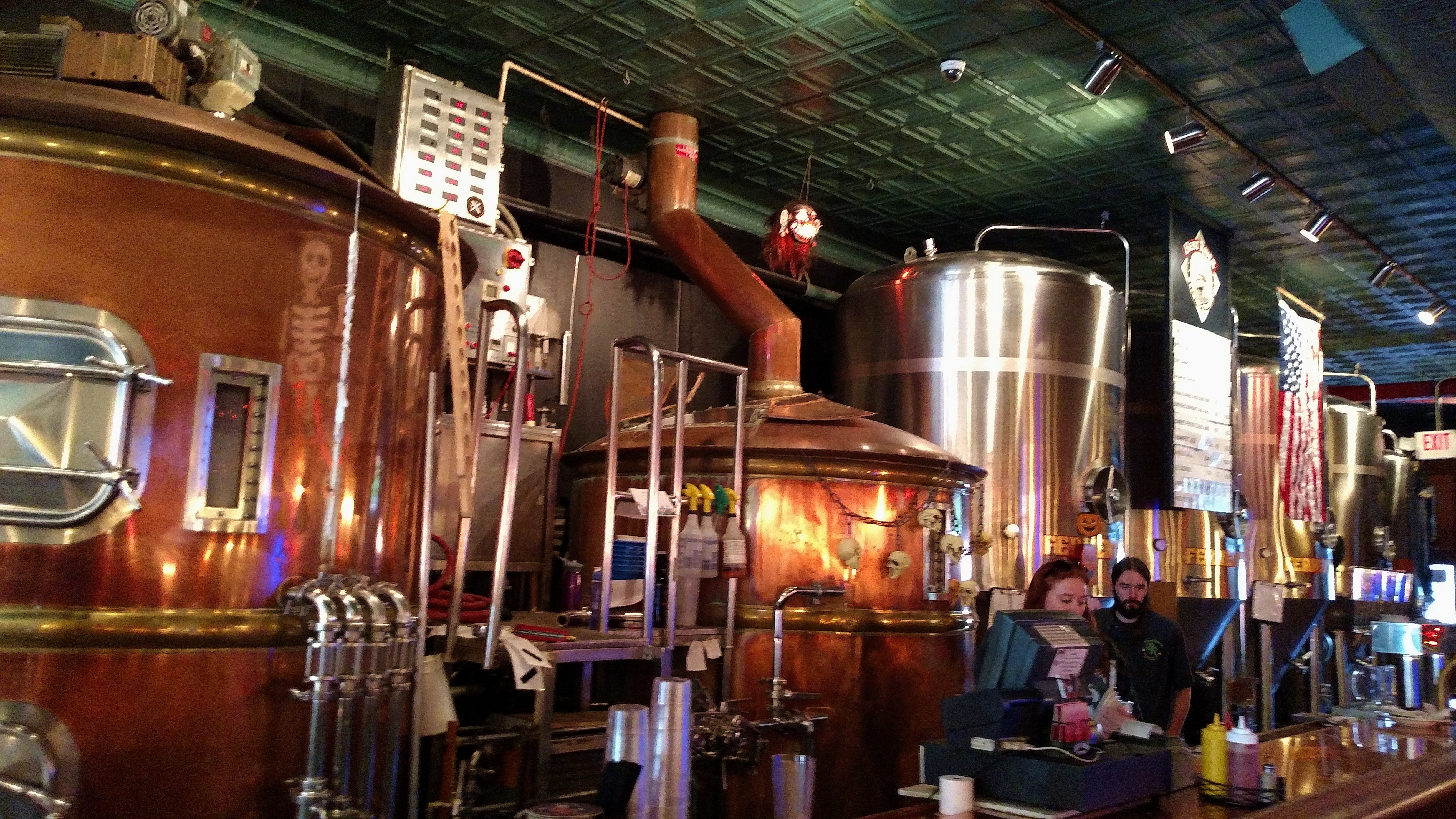 My final brewery visit brought me to the door of Bent River Brewing Company. When I entered, I had a “woah” moment. Never before have I been in a brewery where the bar is literally just a few feet from the brewhaus and fermentors. Wooo! You could literally sit at the bar with a pint and take a brewery tour at the same time. All that copper and stainless is enough to make any beer lover drool.

Shepherds Pie was an obvious choice for me, and paired nicely with the two stouts in my flight. Jingle Java Holiday Stout stood out from the rest with hints of rum and spices. Nothing hits the spot like a stout and pie after a cold night in the truck! Their Replicale Apricot Rye Saison was also notable with its spicy, tangy character. I’d love to try making a homebrew of something similar in the future.

My stay was short, as the road ahead of me was long. The barkeep filled me in on a bit of brewery history as I finished up and asked for the tab. I snapped one more picture before heading out the door and back on the road.

Sometimes the driving sucks. Sometimes I was bored or tired or even completely over it and wanted to be home already. But more often than not, I was looking forward to the next pint, the next dose of local gossip, the next best friend I’ll make over a stout and a pretzel. And now that there’s hardly any road between me and where I’m going, I’m left longing for those places where you walk in as a stranger and walk out as a friend. There’s nothing like the open road. I may be pining for my next beer road trip, but at least I have these to keep me busy.