With so many microbreweries throughout the country being bought up by larger ones, it’s really refreshing to have a small, homegrown, local brewery like 2 Row in town. Husband and wife team Brian and DeDe Colman are like your neighbors around the block, except now they’ve got a bit more than just a home brewing system in their garage. After initially getting started with a Mr. Beer home brew kit and then expanding into their garage, they eventually purchased a small, second hand professional brewing system they found in the classifieds from a brewery in Georgia, and went pro by co-founding 2 Row Brewing. The parents of two children opened their little Midvale, UT bottle shop store front in June of 2015 to become the Salt Lake Valley’s newest neighborhood brewery.

This family operation is a Mom and Pop brewery in every sense of the word. The Colemans work 10-12 hour days, 7 days a week to run their new business and aren’t sure when they’ll get their next vacation. Pop (Brian) creates, fine-tunes the recipes, and brews the beer. Mom (DeDe) keeps the books, mans the bottle shop, and helps with the bottling. Their son, Derek, helps Dad out by doing a lot of the manual labor like cleaning out the mash tun and fermenting tanks, and he also pitches in with the bottling. Derek, who is heading off to Utah State this fall to study mechanical engineering, has really enjoyed working with his Dad and is proud of what he’s accomplished. Brian has been a bit of an entrepreneur. He had a trucking business that hauled all sorts of things like bottled water, onions, and Christmas trees. He still has a towing business that he’s left in the hands of a capable manager to run while he pursues this newest venture. Beer, it seems, is his true passion.

Once he was bitten by the beer bug, Brian went full steam ahead with his new hobby. His home brewed beer won numerous awards both in Utah and elsewhere in the US. He took a course in beer quality and analysis from Oregon State and became a nationally certified beer judge. As a professional brewer, he’s a perfectionist. A lot of time is spent figuring out how to lower the oxygen levels in each recipe he brews to achieve the best product possible. He has avoided selling his beer through the Utah DABC, except by special order, because they don’t refrigerate their beer which can alter the flavor. This has limited 2 Row’s “high point” (above 4% abv) beer to being bottled and sold generally through restaurants, bars, and the Midvale bottle shop where it’s brewed.

As their business grows, the Colemans will have some growing pains and many decisions to make, but they’d like to keep their focus on the beer. There has been some thought about the possibility of opening a pub of some sort where people can come and drink their beer and maybe eat some food, but ultimately, it’s the product itself they want to sell people. Anything else will likely be an enhancement of that. Currently 2 Row has 4 beer styles available: golden ale, IPA, double IPA, and American farmhouse ale. A mocha porter is in the works, which I’m very excited about. Every one of their beer styles have been painstakingly crafted to be at the highest quality possible. The latest batch of Accelerator IPA was definitely an improvement on the first one I had, which was a solid IPA to start with. 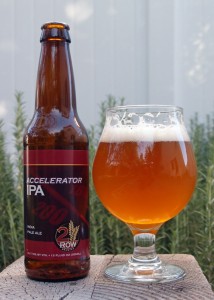 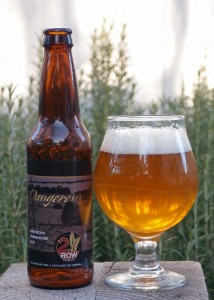 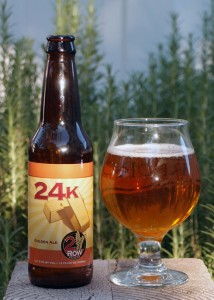 Right now the Colemans are work-a-holics. If things calm down, they hope to do some traveling, drinking beer from local breweries along the way. It might be a while, but they already have a lot to be contented with; a fantastic small brewery that Utah can be proud of! The beer is great, but my favorite thing about 2 Row is the fact that when I go into their bottle shop to purchase it, Brian and DeDe are the ones who sell it to me. They are lovely, unassuming folks who just want to brew good beer, and they’re thrilled for you to drink it. Go and make their acquaintance if you get a chance.